As I discussed in my last blog post, I took a vacation to Hawaii recently, and though I know you don’t want to hear how great a time I had, and conversely nobody wants to hear any complaints that start out “When I was in Hawaii,” everybody loves a restaurant review, right? Well, given that it’s a review of a hole-in-the-wall on the most remote archipelago in the world, and you will probably never go there, maybe you’re not that interested.

But wait, are you a foodie? And do you like taquerias? Are you curious about one man’s effort to find good spicy food in the land of poi? (If you haven’t heard of it, poi is a paste made of taro corm that ancient native Hawaiians allegedly ate, and which you can still get, and which I did try, and which has a flavor a lot like Spackle or Bondo but not as intense. And yes, “corm” is a real word, and yes, I did enjoy using it just now—first time!)

Okay, what if you’re not a foodie? Might you be a tech-weenie? Well then, read on, because—lacking a laptop PC in Hawaii—I dictated this entire review to my smartphone. That leads to all kinds of fun: you can decide for yourself how impressive the voice-recognition software is; laugh at it biggest gaffs; and try to decode (via context) the intended words lurking beneath best-efforts like “dustless pros,” “whole ten toes,” and “run Russian unicorn.” I’ve left the haphazard capitalization in place, such as the so-called smartphone’s decision to capitalize “Chipotle” and “Thunder” but not “hawaii” or the first word of any sentence. I’ve also left misspellings uncorrected, because poor spelling seems to be an island tradition.

(Note: I originally sent this via e-mail as a race report to my bike club. My race reports focus almost exclusively on the food, to the point that it simply doesn’t matter that I lacked a bicycle during my vacation.) 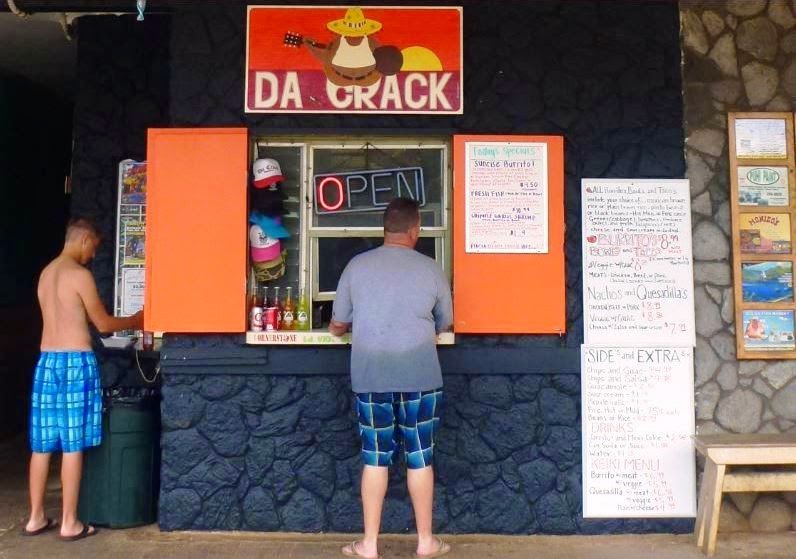 This is a non race report because I’m not doing any racing much less riding while I’m in Hawaii but I’m going to give you a report anyway because not riding racing should never stop you. the food is what’s important I’m going to regale you with the tale of our taqueria here on Kauai because you like to try different taqueria is at least some of us Lindsay of course being the notable exception who hates all Mexican food. okay now I’m really ticked because my whole last sentence all of which was dustless pros has been lost because it couldn’t connect. you see, I’m using the voice recognition because I have awkward stubby fingers to type like the dickens on a proper keyboarding but don’t do so well with these smartphones. stupid anyway, the place we went to as this little hole in the wall taqueria called Da Crack. it was highly recommended on Yelp or whatever those one of those sites one of those rating websites. the logo was a crew leader on cartoon of a guys butt crack. on that basis Alexa refused to eat there but we didn’t give her a choice. Lindsay meanwhile hates all Mexican food on principle making me wonder who the father really is.

so what’s a walk up place just a counter no tables no chair there’s a little tiny bench along the wall outside but it’s really a carryout deal. the whole menu is on a chalkboard but they are also selling their logo bearing hats and shirts. so it’s a combination of small time and self congratulating big time. not that I have any problem with that my favorite place ever la fiesta sold really groovy t shirts. but now I have stolen my own Thunder by mentioning la fiesta because you know that I can’t possibly given to Sterling review to any place having summoned the ghost of my long lost favorite place. this is Andy speaking not Andy and right now I’m eating with a weird seeing images. 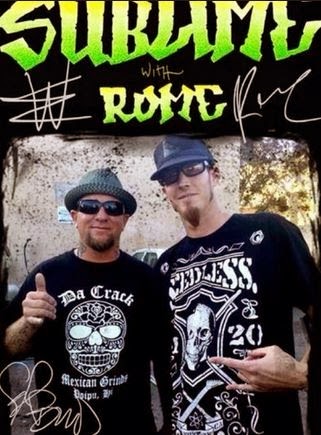 Erin has a fish taco for $11 and I do mean fish taco, singular, but hey Islands prices, right? Alexa and I both had pork burritos, but they were not carnitas, they only had shredded pork, which is a shame, and is matched by the offering of only whole ten toes or whole black beans, not the refried beans that I think should be required in all talk worldwide. but the burritos to come stalk with cheese and sour cream, which is pretty nice because of some expect to be nickel and dime stood up on everything when you’re traveling in hawaii.

so one of the unique things is that they offered two kinds of sour cream or perhaps it was dressing for the fish taco and that was either Chipotle or what sabi and I had to guess that erin would want massage me because she had wandered off to supervise Alexa who refuse to be seen standing in front of a place called Da Crack. Not “what sabi” or “massage me” but wasabi, geez. the burritos were un remarkable and run Russian unicorn remarkable in terms of choices except that it was Mexican brown rice, and cabbage instead of lettuce. Unicode Lindsay ordered see Keiki kids cheese quesadilla, which route was about five dollars, and wish we could have easily made at home which we should have done because of course we took these back to our condo to eat on the lanai.

okay, down to brass tacks. how was it already, you surely want to know. well, the fish taco have these little bricks of fish that looked slightly funny, and meet us a little nervous, at least me, because you know this is the land of spam. not spam as in unwanted email like this one, I but I mean real spam, as in shoulder of pork and meat, or whatever spam stands for. you know, Hormel spam. but the fish, which was probably mahi mahi, was not at all like spam and in fact was quite tasty, and those hotties sour cream, which you’re going to have to figure out what I mean kama because surely this voice recognition software is going to butcher wassabi yet again, was quite tasty. it was a flour tortilla, oddly enough, but there’s a silver lining in that in that the taco, there being only one of them, it was fairly big. it had a side of pinto beans and that aforementioned Mexican brown rice, which were both pretty good, and if there was any complain I had with this thing is that there wasn’t enough salsa, but we had some handmade store bought salsa from the island heater that was fairly good. plus we had some dose Aki’s beer, the special lager with the green label, which wash everything down real good.

so on to the main item that being the burrito, the tortilla was grilled rather than steamed which is great, and the size was pretty good, and the beans were black which of course is not as good as refried was pretty darn good I actually like the rice pretty well. the cabbage was good, & I think I’m going to start using that in our home made make your own tacos, an albert standby, because it gives a little extra crunching is probably better for a kids at being cruciferous. the meat of course is the star of the show, & I couldn’t help but to wish that my shredded pork was carnitas, or that I’ve gotten beef, because it turns out most of the beef on this island seems to be local grass fed beef, but I forgot that and when you’re getting something at a sketchy walk up counter called Da Crack, there’s something that causes you to hesitate about taking any gambles on your meat.

the salsa was okay, but I ordered hot and this stuff was pretty darn tame. they did have a great nation called fire but I avoided it on principle because I think it’s lame to call something fire, and by the way didn’t Taco Bell already steal that name? so anyway I said it was a good burrito, but not a great burrito, and then Gertrude Stein punch me in the face.

so, a little background about the name of this place, which I have to admit did not entice us to eat there. according to the counter person, this place was huge in the 70’s and had some sort of standard name, play pou taqueria or something, but everybody nicknamed Da Crack, and then when it folded in 2007 it was a great opera and everybody back for them to open up again and so when they did this time they just gave it the official name of Da Crack. so what has the script loyal following, almost every review you read says its where the locals go, & I guess I can’t blame them because it’s one thing to come from the Bay Area, possibly the best place for burritos in the entire world, but another to be on some isolated island where most of the food is not Mexican, and where most of the food probably shouldn’t be Mexican, if I’m to be perfectly candid.

bottom line? if I found this place in the mission I might think it was kind of neat because it was a little different a little island inflected, a little islandy you might even say but I wouldn’t go back there because it was perfectly mediocre. but if I found this plays in Saint Johnsbury Vermont, or in Ashburn Virginia, or in an airport, or hell, even in Boulder Colorado, I would think I was a revelation and be very glad to have it around. but that doesn’t mean anything could ever have me rocking a Da Crack baseball cap. 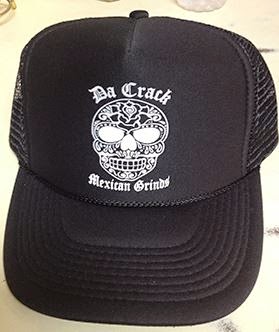