I’m rather farsighted and without a microscope I can’t read the washing instructions on most of my clothing tags.  I can make out the symbols, though.  Problem is, I don’t understand them.  Can you translate?

Here’s a nice summary of the washing symbols, but be careful:  these are the American ones and may not match the overseas symbols used in your clothing: 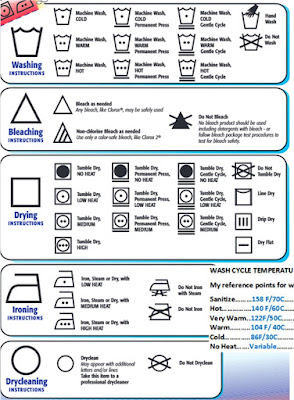 Fortunately, lots of clothing gives you the various versions of symbols you might encounter based on what country you’re in: 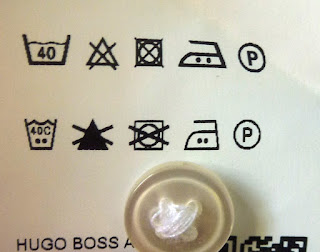 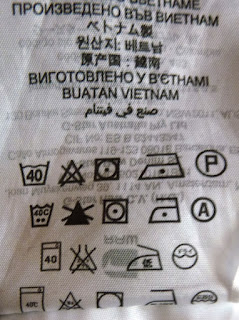 See?  Some countries use black bleach, apparently.  Others have really weird looking irons.  Some keep their bleach in beakers.  The circle with the P in it?  P for Permitted, I assume.  A for Allowed, perhaps?  Or A-OK?

Help!  My wife is a very careless laundress.  Wait, let me restate that.  She’s not a laundress.  Not by profession.  What I mean is, she is very careless about the laundry.  She’s always putting, like, cashmere sweaters through the washer and dryer, or washing my Lycra on hot and drying it on high.  Is there anything to be done?

[Name and location withheld by request]

All I can recommend is getting as involved in the laundry as you can.  Develop a system for hiding those non-machine-washable garments.  I wouldn’t nag your wife too much about it because this just won’t do any good and you need to pick your battles … marriage counselors and divorce lawyers are a lot more expensive than clothes, after all.  (If your wife has a sense of humor, and has seen the film “Raise the Red Lantern,” you might yell—upon discovering another ruined garment—“Cover the lanterns!”)

Also, look for the silver lining.  My sister-in-law inherited a nice wool sweater from a guy who shrunk it in the dryer.  Then she shrunk it in the dryer and so it went to her daughter, and so on down to her toddler.  As for me, my wife put my nice merino wool sweater through the wash and made it all ratty, which greatly increased its utility because I no longer had to “keep it nice.”  In fact, it became my favorite sweater for this very reason.  When’s the last time you got to work on your bike while wearing merino wool?

The Motorola FONE (aka Motofone) F3 is the only one I know of.  My nephew put this through the wash twice, and the first time it survived completely intact.

If you’re looking for a smartphone that will handle this, I think you’re dreaming.  That said, my Motorola Droid Turbo fell into the ocean recently and was almost swept out to sea, but miraculously survived.  But a full wash cycle?  I wouldn’t try it!

Is it true that other developed countries are less profligate than the US when it comes to drying everything in the dryer?

In much of Europe, line drying is very popular.  In England, even in London, I’ve seen permanent clotheslines in backyards (or “gardens” as they’d call them).  And check out this rig in an apartment in Glasgow:

My brother had an apartment in The Netherlands with no dryer … he line dried everything, including cloth diapers.

In the U.S., of course, you’re more likely to run into a homeowners’ association ban on clotheslines, even though these bylaws are currently illegal in 19 states!  Fortunately, you’re protected by a 1979 Oregon Law that says any restrictions on “solar radiation as a source for heating, cooling or electrical energy” are “void and unenforceable.”

You have a Ph.D. in Laundry Science from the University of Nevada at Las Vegas.  Why don’t you call yourself “Dr. Laundry”?  Just curious.

I am aware that The Clorox Company has an online Q&A called “Dr. Laundry” and I don’t want to get into legal trouble like Mr. Beer did, that poor bastard.  He tried to use “Dr. Beer” and was sternly warned to “cease and desist.”  Those close to him say he never recovered from the ordeal.

Are we talking intentionally funny, or unintentionally?  Here’s a winner in both categories:

That’s from a pair of bike shorts.  The manufacturer is clearly having a little fun with “Avoid crashes.”  But it’s unintentionally funny, I think, that the size is given as both XXL and M; that there are two sets of washing instructions that contradict each other; and that we get this cryptic instruction, “Iron low, right side only.”  What could possibly be the point of that restriction?  And who in the history of mankind has ironed a pair of bike shorts?

I also like this tag, from a pair of bike gloves: 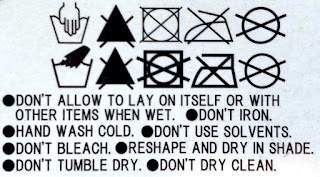 “Don’t allow to lay on itself or with other items when wet”?  How do you keep something from laying [sic] on itself, anyway?  Or even from lying on itself?  What could possibly be the consequence of this happening?  And what shape could you reshape the glove into that it wouldn’t be lying on itself?  And can you really reshape a glove to begin with?

Let’s get down to brass tacks:  when laundering is taken into consideration, are cloth diapers actually better for the environment than disposable?

This article suggests that cloth diapers are actually highly problematic because they’re made of cotton, and as she puts it, “the data on cotton is damning.”  I don’t put a lot of stock in this article because the author works for a think tank that represents the interests of the waste management industry; because she thinks “data” is singular; because I’m not going to stop wearing cotton in favor of disposable clothing (which would be the natural extension of this article’s conclusion); because this article presents a pretty good rebuttal; and because babies are quicker to be potty-trained when they’re clad in cloth diapers, which isn’t even considered in the article.

They seem to work about the same, as far as I can tell.  So the difference has more to do with what song you get in your head upon using them.  If you watched TV during the ‘80s, you’ll likely get the “Spray ‘n Wash gets out what America gets into” jingle lodged in your brain, which can be annoying.  On the other hand, if you listened to the radio during the ‘80s, you’ll probably fall prey to the Tears for Fears song “Shout.”  This song is terribly catchy, and includes the line “in violent times you shouldn’t have to sell your soul,” which makes no sense.  It implies that you should only have to sell your soul during peacetime.  WTF?? 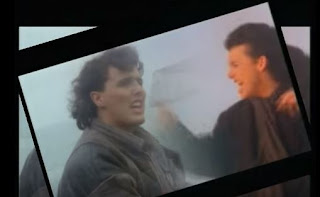 Do you have any answer to the widely acknowledged mystery of why so many socks get lost in the dryer?

I researched this phenomenon for years, tirelessly, and got nowhere, and then I stumbled across this blog post, “Conundrum of the Lost Sock,” and realized all my work had been in vain because everything that could ever be said on this topic has already been said.  Glad I could provide the link to you, anyway.

What’s the most absurd washing instruction you’ve ever seen?

Definitely this one right here: 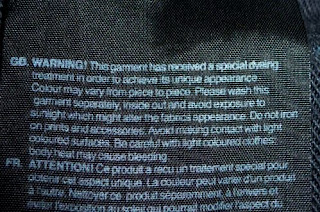 That’s a tough one to read (whose idea was it to print the washing instructions on a black tag, for crying out loud?) so here it is in plain text:

“WARNING!  This garment has received a special dyeing treatment in order to achieve its unique appearance. Colour may vary from piece to piece.  Please wash this garment separately, inside out and avoid exposure to sunlight which might alter the fabric’s appearance… Avoid making contact with light coloured surfaces.  Be careful with light coloured clothes—body heat may cause bleeding.”

I don’t even know where to start here.  I guess I’ll go sequentially.  First, “WARNING!”  I mean, is this a washing instruction, or a safety advisory?  And then, “Colour may vary from piece to piece.”  I mean, isn’t that true of everything?  And why do we need a label telling us this?  Can’t we tell, just by looking, that this pair of jeans is a different color than that one?  If this “warning” is targeted toward blind people, why isn’t it in braille?  Then we get to “avoid exposure to sunlight.”  Is this a pair of jeans, or a vampire’s cape?  Who doesn’t wear jeans outdoors?  Are these jeans exclusively for nightclubbing?  And in what way could sunlight “alter the fabric’s appearance” other than fading it?  Has society gotten so far off-track that faded blue jeans are no longer acceptable?  And then we get to the startling conclusion:  “Body heat may cause bleeding.”  So I guess even nightclubs are off-limits unless you’re determined to just sit there on a bar stool, as still as possible, perhaps shivering in a dark-colored t-shirt?  Give me a break.

What would happen—hypothetically speaking—if you didn’t separate your darks from your lights in the laundry?

Believe it or not, I’ve been doing just that—for decades!  My recklessness has produced almost no negative consequences.  My whites are plenty white.  Nothing has bled, not even the jeans that are vulnerable to body heat.  The single exception is a pair of unripe-plum-colored yoga pants my wife ran through that turned everything pink.  They were pure garbage, those pants.

Have you ever noticed how laundromat dryers will tell you to dry all cotton garments on high—and yet you’ll never encounter a single tag that says “tumble dry high”?  In decades of careful laundering I think I’ve only encountered one garment that even said “tumble dry medium.”  I think it’s a giant liability shift on the part of the Clothing Industrial Complex.  They create these stupid rules for laundering so that if anything ever goes wrong with a garment they can blame the consumer.  Look at this tag:  the manufacturer blames the clothing’s “pilling effect” on zippers, Velcro, and even embroidered saddles. 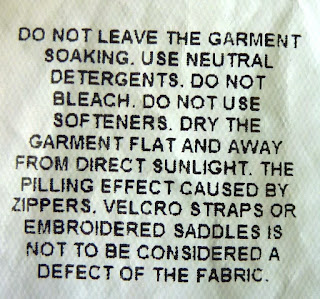 Will you do my laundry?