From the Archives - Unemployment Poetry

Since I started this blog seven years ago, I’ve posted 346 times (generally four posts per month).  It’s not easy to write that often, so I sometimes don’t.  That’s what these “from the archives” posts are for.

Lately I’ve been doing a hybrid version of this:  I post an old poem, then provide all-new footnotes and commentary on it.  (Pretend you found this in your Norton Anthology of American Teen Poetry.)  Today I go back to a poem written under extreme duress:  I’d just turned 18, moved away from home, and then hit the doldrums after entering my third month of unemployment. 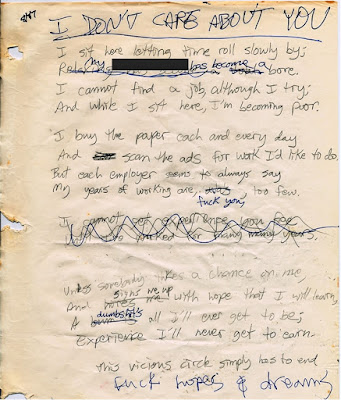 I DON’T CARE ABOUT YOU

Title:  I DON’T CARE ABOUT YOU

The title should not be construed as anything aimed at the reader.  I assumed when writing this poem that nobody would ever read it.  I knew back then (though I’ve evidently since forgotten) that nobody wants to read amateur poetry.  I’d read The Hitchhiker’s Guide to the Galaxy and surely took note of the Vogon captain’s threat that he’ll not only fling the heroes into space to die, but that “if you’re very lucky, I might read you some of my poetry first.”

Frankly, I’m posting this poem here largely for archival purposes:  until now, it has existed only in the original hardcopy, on paper that’s gradually disintegrating.  If you’re reading this on April 15, 2006, or in the days (or perhaps even weeks) following that date, you’re in a race against my mom and might very well be the first living human to lay eyes on this poem.  (Dead humans, down in hell, may see it constantly; it may be posted in every corridor down there.)  If you think you may be the lucky first reader, feel free to e-mail me and see!

So why “I DON’T CARE ABOUT YOU”?  Well, it was a dark time, and I was an angry youth, and had soured on soft rock around then.  I distinctly remember turning against Simon and Garfunkel (more on this later), and railing at the Peter Gabriel song “Don’t Give Up,” mainly due to guest singer Kate Bush’s contribution to the song, which (in my angry youth mode) I might have described as “menstrual.”  So I turned to punk rock, notably Fear, which I had on cassette.  This album had a very memorable song titled “I don’t care about you.”  (Sample lines:  “I seen an old man have a heart attack in Manhattan/ Well he died while we sat there lookin’ at him/ Ain’t he cute?”)  When I finished this poem (as you can see it was only very lightly edited) I realized it needed a title, and “I DON’T CARE ABOUT YOU” seemed as good as any.

(A final note:  my favorite song on the Fear album in those days, due to my depression and frustration, was called “Getting the Brush,” which I’ve explored at length in an exegesis in these pages … click here.)

This may well be an unconscious tribute to the Simon and Garfunkel song “The Boxer,” which was probably on my mind, as it includes the lyrics “When I left my home and my family….”  My line “letting time roll slowly by” possibly alludes to “Now the years are rolling by me/ They are rockin’ evenly” (which you’ll find in the concert version of this song).

The first version of this line read, “Relaxing has become a total bore.”  This line wasn’t exactly honest.  I mean, relaxing was a bore, but I later revised this bit to be more specific, and edgier, and more to the point.  That was all well and good for a poem that just moldered away in a 3-ring binder, but not for the Internet.  It’s a happy coincidence that “word redacted” fits nicely into a line of iambic pentameter.

This is probably my least favorite phrase of the whole poem (and/or any poem ever written by anybody).  It seems somehow incorrect to say a person “becomes” poor.  I’m not at all sure poverty works like that.  Many people are born into poverty; some transcend it; some lose everything; but “becoming poor” … it just sounds wrong.  Besides, a middle class kid who knows he’ll one day go to college may be penniless, but doesn’t actually have to face the prospect of real poverty.  This is a sad example of the amateur poet picking words because they meet the rhythm and rhyme requirements of the sonnet.  Pretty lazy on my part.

Over time, fewer and fewer people will remember that, before the Internet, when you were looking for work you actually had to buy a newspaper and look through the classified ads.  These printed ads were billed per word per day, so they tended to be very brief and thus often cryptic; e.g., “Admin asst type 70 wpm WordStar filing phones $1200/mo neg/ xlnt benefits 3 yrs exp req’d.”  The name of the prospective employer was often not given.  You’d just dial a phone number, tell whoever answered “I’m, um, calling about the help wanted ad?” and hope for the best.  I wonder how many times I was rebuffed by some receptionist who didn’t even know her company was hiring.  (Probably never:  I’m just rewriting history to let myself off the hook for interviewing poorly.)

Line 8:  years of working are, fuck you, too few

I was living in San Luis Obispo, a college town, and there were probably plenty of people trying to get the lucrative office jobs I sought.  Likely there were even college graduates going after those jobs.  I just didn’t know how the world worked.  I also kept holding out hope that Spirit Cycle Works, the bike shop where my brother worked, at would eventually hire me, but I was deluding myself.  It was plain to see that Spirit was slowly dying.

In revising this poem, I was totally right to replace the word “alas.”  That might have conveyed how a prospective employer might have tried to let me down easy, except that almost nobody uses the word “alas.” I sure didn’t hear it from the manager at Sizzler Steakhouse where, in desperation, I applied as a dishwasher—and was denied!  The guy said, “You didn’t get the job.  But check back with me on Thursday because, this guy I hired?  I don’t think he’s going to work out.”  I think “fuck you” is a very accurate, concise summary of that message.  And the internal rhyme of “fuck you, too few” is probably the strongest thing about this poem.

This revision makes no sense.  The phrase “hires me” is better all around.  Why did I change it?  Who knows.  I think I just wasn’t trying very hard—at this poem, or at getting a job.  At the time I was scared shitless about my future and a kind of paralysis had set in.  To be honest, I wasn’t rejected that many times … I just wasn’t applying to enough places.

Changing “bum” to “dumbshit” was a fine edit.  After all, nobody uses “bum” to mean “chronically unemployed person” anymore (nor back in 1987).  A bum was somebody who spent too much time on the couch or borrowed money without paying it back.  And of course “dumbshit” perfectly matched the overall mood of the poem.

That said, the idea presented here—that getting a job will keep you from becoming a dumbshit—is problematic.  As it turned out, the first job I ended up getting—working in a factory canning underwear—would not have prevented me from declining into dumbshit-hood.

Canning underwear?  It’s true.  I worked at a factory that made Hot Chillys thermal underwear, which was packaged in cans.  I still have one of them: 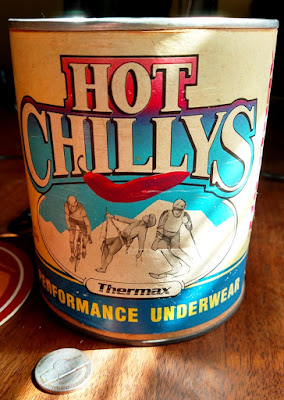 Full disclosure:  I only worked the canning machine for about a day.  The company made better use of me in the shipping department, which took more brains because the underwear wasn’t being made nearly fast enough to keep up with orders, so we had to ship partially-filled orders to every customer and keep track of how much product each customer was owed.  That was a pretty good job.  In fact, when Spirit Cycleworks let my brother go, I got him a job at the factory working right alongside me.

This line makes no sense.  My situation was a bit like a Catch-22, in that I had to have work experience to get a job but couldn’t get that experience without a job—but that’s in no way a vicious circle.  There was absolutely nothing cyclical going on, nor anything vicious.  I certainly wasn’t going to get a job as a poet with clunky lines like that.

This was a bold, decisive way to get out of the corner that line 13 had painted me into.  You can tell “fuck hopes and dreams” was added later, as it’s in the same blue ink as the revisions.  I must have gotten to the end of line 13 and just given up on the poem, and then came back to it later and hastily finished it off without worrying about meter, rhyme, or even conveying anything meaningful.

This line, “fuck hopes and dreams,” is actually a cinematic reference, but to a movie whose title I cannot remember.  It was a really awful movie.  My brother and I rented a lot of movies in those days, most of them awful.  This line came toward the end of the movie when the main character, totally stymied by everything in his life, melodramatically picked up a gun, put it to his head, and uttered this line.  I can’t even remember if he pulled the trigger because at this point in the movie my brother and I started laughing so hard we couldn’t see straight.  My god that was a stupid movie.

When researching this commentary I looked up “fuck hopes and dreams” on the Internet Movie Database but couldn’t find anything.  Probably it was such a forgettable movie that nobody bothered to mine it for memorable quotes.  My search did turn up a movie called “Young People F---ing,” which earned a Critics’ Metascore of 39 out of 100, which is remarkably low (but not the worst I’ve seen).

So, it’s been a long time since I wrote my unemployment poem, but I’m pretty sure the last line was a way to tell myself, “You’re being silly and melodramatic, lugubrious even, like that awful movie, and it’s time to stop writing indulgent, woe-is-me poetry and go get a damn job.”  Which I did.  After the underwear cannery gig ended, I held down two jobs concurrently—one at a bike shop and one at a radio station, as an evening receptionist—which not only paid the bills, but helped me save up some money for college.  Looking back, I’m glad I had that unemployment experience, and the depression that went with it, just to get it out of my system—hopefully once and for all.