NOTE:  This post is rated PG-13 for mild strong language and an instance of shocking grossness.

Does advertising work?  Clearly.  Does it work on me?  I’d like to think it doesn’t (like most people, I imagine).  But advertising is complicated.  In this post I examine the matter by looking at a product brand—Halls cough drops—that I am loyal to, both because of and in spite of its manufacturer’s methods of hawking it.

A bit of history

Back when I was a teenager, when we all watched TV because it was all we had, Halls ran TV commercials. Most, such as this ad from 1979, were variations on a single script, which ran something like this:

MAN #1:  “Wow, smell that bacon!”
MAN #2:  “Nothing can penetrate this stuffy nose.” (Because he has a cold, this comes out as “Nothig can penedrate dis stubby dose.”)
WOMAN:  “This can!”  (She holds out a package of Halls.)
MAN #1:  “Halls Mentho-Lyptus?”
WOMAN:  “Mm-hmm.  With vapor action!”  (MAN #2 is shown undergoing vapor action treatment, with cheesy special effects and the helpful caption “PENETRATING VAPOR ACTION.”)
WOMAN:  “Halls vapor action penetrates deep into clogged nasal passages to help your stuffy nose feel clearer, while Halls soothes your throat to help your cough!”
MAN #2 (after using Halls, and while inhaling deeply, with evident satisfaction, through his nose):  “Hey, this is somethin’!”
MAN #1:  “The bacon?”
MAN #2:  “No, the Halls!” 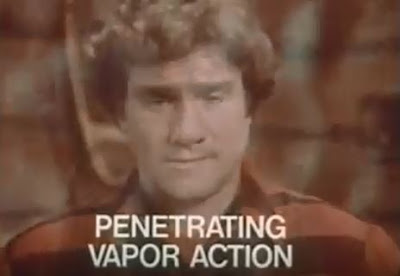 So did this ad work?  Not exactly—at least, not right away.  For one thing, I was so healthy back then I never needed cough drops.  But the commercial did get my attention, obviously.  And why did it?  Because, even for its day, it was pretty corny.  I guess that’s what drew me to it—the unabashed earnestness of it, which I respected even as I mocked it.  (Of course I mocked it—I was a teenager.  I mocked everything, as do all teens everywhere.)

In college I started having frequent sore throats and congestion (which afflict me to this day).  So, remembering the Halls ad, did I run right out and buy that product?  Nope.  Being highly skeptical of ads, and probably even then having a natural desire to punish companies for advertising at all, I bought some other brand of cough drop I’d never seen advertised.  They were cherry.  They didn’t work worth a damn.  I don’t think they had any active ingredient.  Only after they failed me did I think back to that commercial.

I wondered:  could Mentho-Lyptus be an actual drug?  And could vapor action really be a thing?  My back to the wall, I was just crazy enough to try it.  And guess what?  This Halls shit is for real.  The cough drops do work.  Halls actually has a bona-fide active ingredient, menthol.  (Is it fair to say I totally respect the company?  No, I won’t go that far … they make other non-medicated products, Halls Super Defense and Halls Breezers, that are essentially candy masquerading as medicine, which is pointless and confusing.)

My brand loyalty to Halls has held up.  My wife sometimes gets seduced by Euro or boutique-y products, such as Ricola or these weird Thayers Slippery Elm lozenges.  Ricola are basically candy and the Slippery Elm taste and smell like the ‘70s.  (You know, like the floor of somebody’s filthy old Ford Pinto after the AC has flooded the food-littered carpet.)  These other products don’t work.  I always go back to Halls.

(By the way, I did not get any free product or compensation of any kind for promoting this brand.  I think I’d be legally required to disclose this if I did.)

Okay, fine, a stupid ad in the late ‘70s worked on one guy—big deal, right?  But wait:  if you’re old like me, you’ll recall that many, perhaps most ads used to be sincere and informative like that.  They were a basic appeal to reason, and showcased attractive features of the advertised product.  This camera is easy to use!  This car gets great gas mileage!  This lite beer won’t slow you down!  Peanuts in peanut butter nougat!  Four out of five dentists surveyed recommend sugarless gum for their patients who chew gum!

I, for one, feel nostalgia for those days.  Needless to say, other than Shane Company radio spots (which I adore), ads are much slicker now and often make no outward promises of any kind.  They just show really sexy, happening people juxtaposed with (and not necessarily even using) the advertised product.  Instead of gas mileage figures we get “the heartbeat of America.”  Instead of “flame broiled!” we get “I’m lovin’ it!”

Okay, I’ll admit these examples could be a bit dated already (I don’t watch TV … sue me).  So I googled “most popular TV ad” and got this one, for the web domain company Squarespace.  It’s a perfect illustration of what I’m talking about: it shows the actor John Malkovich getting really frustrated because some other John Malkovich has already taken the domain johnmalkovich.com.  Naturally, the viewer is expected to share the actor’s frustration. But think about it:  aren’t we much more like the average joe—in this case the mere mortal who snapped up johnmalkovich.com—than we are like the famous actor?  And since all domains are first-come-first-served, isn’t this scenario utterly irrelevant to the value of Squarespace?  Yes, of course—but only by old-fashioned ad standards.  In our modern advertising era, these things are beside the point.

Why this shift in advertising approach?  Hard to say, but it seems like modern consumers are just too cool to be pandered to in the traditional check-out-these-great-features! way.  Maybe today’s ironic, knowing, sneering ads have shaped us this way.  Maybe this modern mindset, that cares more about what this product will make us into, is just a natural extension of our growing insecurity in this youth-and-beauty obsessed culture.

Rather than continue this indulgent bout of mere speculation, I’ll share with you now the literary theory of mimetic desire, as described in a great book, The Possessed, by Elif Batuman.  The theory comes from René Girard, a Stanford professor in the ‘60s, and was (as Batuman puts it) “formulated in opposition to the Nietzschean notion of autonomy as the key to human self-fulfillment.”  Now, I hope you know more about this Nietzschean notion than I do, because I’m not going to explain it for you.  I’m afraid to read Nietzsche, because in my experience the people who admire and cite him are usually tools.  I’m not alone in this; consider this cartoon by the wonderful Gahan Wilson: 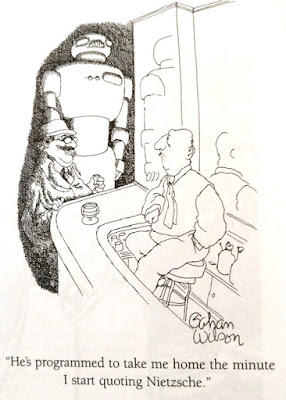 Just think of autonomy in general and Nietzsche’s popular uber-mensch concept, and that should be enough for purposes of contrast.

Batuman goes on to say:

According to Girard, there is in fact no such thing as human autonomy or authenticity. All of the desires that direct our actions in life are learned or imitated from some Other, to whom we mistakenly ascribe the autonomy lacking in ourselves… The perceived desire of the Other confers prestige on the object, rendering it desirable. For this reason, desire is usually less about its purported object than about the Other; it is always “metaphysical,” in that it is less about having, than being.  The point isn’t to possess the object, but to be the Other.  (That’s why so many advertisements place less emphasis on the product’s virtues than on its use by some beautiful and autonomous-looking person; the consumer craves not the particular brand of vodka, but the being of the person who chose it.)

At the risk of warping this explanation a bit, I’ll try to say it more succinctly:  ads have gone from “Enjoy this product” to “Be someone else—someone good.”  In terms of modern insecurity-based advertising, L’Oréal was an early adopter with its slogan “Because I’m worth it.” This message may seem affirming, but it’s also a challenge:  “If you don’t spring for this product, you’re accepting that you’re not worth it; i.e., you’re beneath it.”  Moreover, you’re beneath the beautiful woman presenting the product.  You’re beneath the Other.

It probably goes without saying, but I despise the cynical whatever-works ethos behind this approach.  I love this indictment, from the TV writer George Meyer:  “I hate [advertising] because it irresponsibly induces discontent in people for one myopic goal, and then it leaves the debris of that process out there in the culture.”

Where does this leave Halls?

Let’s face it:  products like cough drops will never be sexy.  It will never be possible to advertise them in the modern way, and the corny old-school style of product-feature-based advertising would be laughed at today (unless somebody were to tweak the ad to be ironic and meta and knowing, which would only work like once).  So how do humble products like Halls hold their ground in this Brave New World?

For one thing, manufacturers can put messages on the product packaging itself to reinforce the consumer’s choice to purchase it.  These messages need not be limited to product information.  For example, a message might take something humdrum and unpleasant like a cold and make it seem empowering.  I’ve actually seen this more than once.  As I’ve noted before, a Kleenex box included this consumer-oriented text:  “Say goodbye to the stiff upper lip.  Tell calm, cool and collected to take a hike.  When tons of stuff stuffs up your nose, blow it loud and blow it proud!”

Halls has also gotten into this game, via inspirational messages (A pep talk in every drop™) printed on their wrappers: 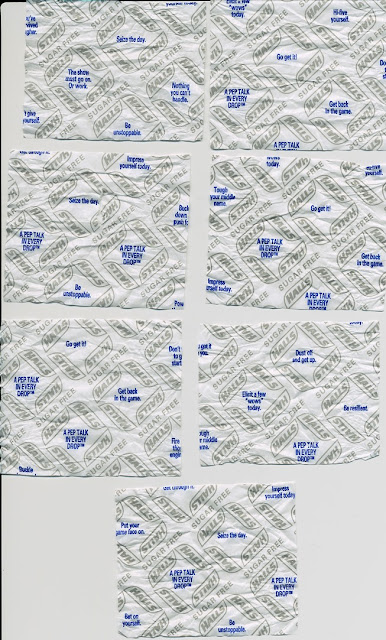 So you won’t have to squint, here are some example messages:
These aren’t ads per se, but they serve approximately the same purpose:  using consumer-oriented messaging to build brand loyalty via positive associations.  Do these miniature pep talks fit the modern advertising model?  Sort of … after all, they’re pithy instead of earnest, and slightly snide (e.g., “The show must go on. Or work.”).

On the flip side, this way of reaching consumers doesn’t offer any version of the Other.  Where illness is concerned, you can only present the consumer with a better version of himself (e.g., one who is productive even when fighting a cold).  After all, it’s not like you can just show sexy people frolicking on a beach saying, “Look at me not having a sore throat anymore!” or “Look at me being able to smell the sunscreen!”  The hundreds of people surrounding us who don’t have a cold aren’t obviously superior; after all, everybody gets colds.

As I see it, the Halls pep-talk messages are more in the Nietzschean model:  eliciting wows, being unstoppable, and impressing yourself invoke the idea of the authentic, autonomous uber-mensch.  (At least, as far as I can tell given my glancing acquaintance with Nietzche’s ideology.)

Well, no.  I can and do dislike either—perhaps any—approach to advertising that leverages behavioral theory in order to subconsciously manipulate consumers.  Moreover, the pep talk snippets on the Halls wrappers are disappointingly trite, predictable, and tame.  Halls could do a much better job with these, not just by getting back to product information but by being funnier, more varied, and more surprising.  I could really get into this pep talk stuff if the wrappers had stuff like this:
But you know what?  I’m glad I don’t like the Halls pep talks.  I’d rather be confident that I’m using this (or any) product only because it works, as opposed to admitting that I’m swayed to any degree by a company’s consumer-oriented messaging.  I won’t be Madison Avenue’s bitch!

For a complete index of albertnet posts, click here.