A Newbie’s Guide to Poison Oak and Poison Ivy

NOTE:  This post is rated PG-13 for mild strong language and comprehensive grossness.

Maybe you’ve never had a rash from poison oak or poison ivy.  I didn’t either, until recently when Mother Nature caught up to me with a vengeance.  If your avoidance techniques and/or home remedies aren’t cutting it, you might get some benefit from this post.  On the other hand, if you seem immune to this malady, or if your techniques are totally effective, you may yet enjoy reading about my suffering, and feeling smug in your superiority.

What are poison oak and poison ivy?

Poison oak and poison ivy are plants in the Toxicodendron family.  Do not fail to note the word “toxic” hiding in there.  And before you go casting aspersions on oak trees, note that poison oak isn’t actually oak.  Some dumbass called it that and the name stuck.  (If I seem grumpy, it’s because large swaths of my skin are grossly red and itchy and have been for over a week.)

Here are two photos of poison oak.  One is pretty good and should show you what it looks like.  The other photo is pretty blurry, which is more realistic—usually you don’t get a clear view because you’re chasing a dog or a ball or have lost control of your mountain bike, and you only realize it’s poison oak after it’s too late. 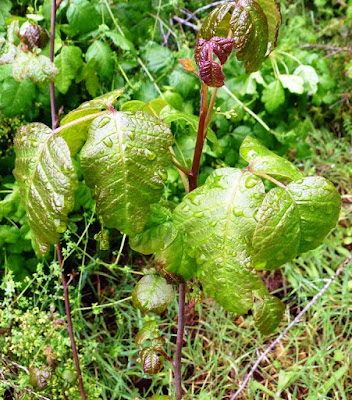 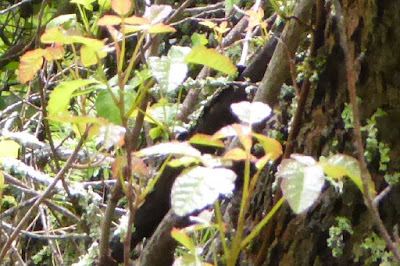 Half the time, when people say “poison oak” or “poison ivy” they’re referring to the rash that these diabolical plants can give you.  The technical term for this rash is “urushiol-induced contact dermatitis.”  (Why hasn’t somebody come up with a catchier term for this, along the lines of saying “the clap” for an STD?  You got me.)  Using the plant name to refer to the ailment goes back at least as far as 1963, when the song “Hello Muddah, Hello Faddah” included the line, “I went hiking with Joe Spivey, he developed poison ivy.” For the purposes of this essay I’m going to refer to urushiol-induced contact dermatitis as “rash” or “hell-rash.”

Is this rash contagious?

For God’s sake, no!  This myth about contagiousness is oddly persistent, probably because the hell-rash is so hideous to behold.  People must lose their normal faculty for healthy skepticism when they look at the disgusting blistering and pus-oozing sores on your skin.  Here’s the full story on how this rash develops:
Will this post include some gnarly photos of the hell-rash?

No, I wouldn’t do that to you.  It’s bad enough having to look at this rash.  I’m not even going to describe it to you, though that would be a fun literary exercise.  Suffice to say, the right photo or description would have you PUKING FOR DECADES.  I was actually so worried about the severity of my rash, I even considered going to the doctor, until I showed it to a fellow mountain biker who said, rather casually, “I’ve seen worse.”

How long does the rash take to develop?

The rash can take anywhere from like 12 hours to 10 days (maybe even longer) to develop.  This might have to do with how sensitive you are.  Or maybe it’s just one of those things.

Anecdotally, the rash may be brought on by noting a friend’s terrible rash and thinking, “Sucks to be you!”  That’s what happened to me.  A week after a bike race at a notoriously Toxicodendron-infested course I was on a team ride and saw this other racer’s rash in full bloom, and thanked my lucky stars at my apparent immunity, and then BOOM!—two or three days later I woke up with blood all over my legs.  I’d evidently scratched the crap out of my hell-rash, in my sleep.  Several days later I got an even worse rash on my left arm, starting at the wrist.  (Could this have been a separate exposure?  Sure it could!)

How can I avoid getting this rash?

A surefire way to avoid Toxicodendron plants is to stay indoors at all times, and avoid snuggling with a hiker until he or she has showered.  Unfortunately, staying indoors all the time leads to sloth, lack of muscle tone, depression, arthritis (via video gaming), brain-drain (via passive video entertainment), and myopia (from too much reading).  This indoor lifestyle can even lead to rickets.

The fact that in over 47 years I never had a reaction to poison oak/ivy, despite doing a lot of hiking and mountain biking among these plants, may be a simple matter of luck (more on this later).  That said, I have almost always taken steps to minimize my risk, and maybe they are effective—so here goes:
Are some people immune to the Toxicodendron hell-rash?

It seems like some people are indeed immune to this awful rash, but I have always suspected you simply get some number of freebies before your body decides it’s allergic to the urushiol oil.  I’ve done my best to avoid it all my life, which might have extended my grace period.  There have certainly been times when I came in contact with poison oak without suffering any consequences.  One time my wife said, “Dana, look down,” and I discovered I was standing right in a big clump of poison oak, while wearing shorts.  A couple months ago I crashed into it on my bike.  Neither time did I develop a rash.  It’s possible this was due to my cool-shower regimen but probably I just got lucky.

The case I have now hit me about ten days after my race.  It’s worth noting that this was the first time I was unable to shower right after my exposure.

If you still think you’re special and immune to this rash, consider this chilling tale: at summer camp back in the ‘70s, a very stupid kid rubbed poison ivy all over his hands to show off how he was immune.  The rash hit him after just a few days and it was so bad, his hands looked like entrails and he missed the second half of camp.  Everybody had a good time talking about how stupid he was.  Looking back, I don’t think he was especially stupid.  He was just stupid in a way that lead to a very dramatic situation.

Speaking of kids, my kid has this rash.  Does that make me a bad parent?

Look, your kid didn’t ask to be born, okay?

I have come down with the hell-rash … what should I do?!

Okay, first of all, DON’T PANIC.

What stupid advice.  Of course you shouldn’t panic.  Ever.  I don’t even know why I wrote that.

Second, assure your friends and family members, who are recoiling at the sight of you, that the rash is not contagious.  It’s okay to be visibly exasperated at their silliness, but don’t complain in their presence about your discomfort, because they already hate you for the disgusting spectacle you present to them.

Third, try to avoid scratching the hell-rash.  At least, that’s what your spouse will tell you, over and over.  It seems a) intuitively obvious that scratching is a bad idea, and b) almost impossible not to scratch, especially if you tend to sleep ever.

Now, I have to temper this no-scratching advice with the following tidbit, related by a friend who heard it from a former Olympic cyclist:  “Get some 80 grit sandpaper, scratch the shit out of it until it bleeds, and clean up the wounds.  Believe me, I’ve tried everything over the years and it’s going to spread a bit anyway.  Just succumb to it, relish in the scratching because it feels so good, and treat it like a scab.  If you’re not man enough for that, there is a gel available now that is powerful stuff and helps with the itching.”  I haven’t followed up on the gel bit yet, because a) I don’t want to seem unmanly; b) I can’t see how I’d use this gel without making a mess of my clothes; and c) this rash itches so bad I can’t even remember the third thing.

I’ve found that the rash itches more when it dries out.  You can keep it moist by bandaging it, and my favorite product here is Tegaderm, a “transparent film dressing.”  It’s like a big piece of clear tape, but it sticks only to skin and not to the wound.  (It’s great for road rash, too.)  Brace yourself, though:  Tegadarm is really expensive.

If the itching is driving you crazy, Benadryl does seem to help.  I had to take this before bed a couple times, which did help me sleep, but man, the hangover from that drug is a real bitch.  There’s also a spray version of Benadryl.  (My wife tried this a couple decades ago.  I don’t remember whether it worked or not, and would probably have forgotten all about it except for something funny:  she was in such dire need of relief, we didn’t wait to get home before applying it.  We went out behind the grocery store and she was spraying it on her legs when this store manager came bursting out from a back door and yelled, “CAUGHT YOU!”  His initial look of triumph evaporated very quickly when he saw our bewildered expressions.  Apparently he’d been lying in wait for teenagers who’d been tagging the wall with spray cans.)

If things get too bad, you can go to the doctor and get a prescription for a steroid.  This might be necessary in severe cases, particularly if you’re highly sensitive, and/or get it in your damn throat (yes, this can happen), or if you’ve inhaled the smoke caused by some shit-for-brains who decided to burn a big pile of poison oak leaves.

Is there any redeeming value in Toxicodendron plants?

No, there’s nothing good about these plants and I cannot see why somebody hasn’t designed a miracle herbicide to eradicate the entire species from the face of the Earth.  Probably scientists would feed you something about the “interdependent ecosystem” or the “web of life,” which is easy for them to say because they’re not straining to avoid scratching themselves to death.

I guess the only silver lining is that, as with all suffering, the hell-rash can give you an opportunity to commiserate with others.  But that’s a pretty thin lining, and probably fake silver, like the cheap pseudo-chrome they put on plastic car bumpers that eventually gets scraped off and looks bad.