From the Archives - The Vermont Incident

As described here, my wife Erin and I did a 7,500-mile bike tour back in 1994. For the most part, we found our fellow Americans to be very friendly, and we rarely felt unsafe. We were ripped off only twice—once by squirrels and once by a raccoon. That said, on one particular morning we stumbled into something rather harrowing. Since it’s a slow news day at albertnet, please enjoy this true story from my bike tour journal archives. 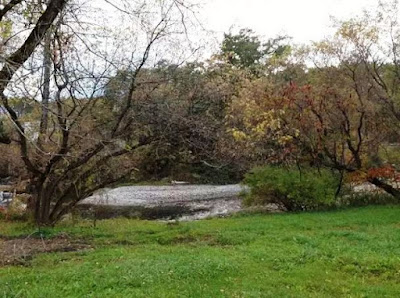 After our visit to Burlington, a long day on the bikes brought us to the Onion River Campground near Plainfield, Vermont. To get there we had to tackle a devilish 3‑mile climb, which culminated in the breezy declaration by the ranger that they were full. Erin, expertly trained in sales, said, “Well, we’re not leaving.” Within moments, the ranger said, “Aha! We’ve had a cancellation!” It was a fine campground and we enjoyed a pleasant, quiet evening. Then it rained all night and our gear got soaked. The next morning we were packing up our sodden stuff when a disturbance at a neighboring campsite caught our attention.

A fellow camper, a very small, flimsy-looking man, had somehow broken the driver’s side window of his little pickup truck. Seemingly on the brink of tears, he looked up the trail toward the restrooms and howled, “Honey, honey, I broke the window! It was a mistake! Honey, I’m sawwwwww‑ry!” A giant Gorgon of a woman, twice this guy’s size, with arms like champagne magnums and a clanging, booming voice, charged down the trail towards her husband, screaming, “YOU IDIOT! YOU STUPID BASTARD, WHY, YOU JUST WAIT UNTIL I GET OVER THERE!” He really was in tears now, and pleaded lugubriously, “Honey, please don’t hit me—I love you! I’m sawww‑ry, it was a mistake! Don’t hit me!” She reached him now and screamed, “I’M NOT GONNA HIT YOU, YOU STUPID PIECE OF S—, BUT WHEN WE GET BACK, WE ARE THROUGH, DO YOU HEAR ME?”

His voice climbing an octave a second, he begged, “Awwww, honey, stop it, I love you, I need you!” She spat back at him, “Not my problem! YOU STUPID F—ING IDIOT! WHY DIDN’T YOU WAIT? GOOD FOR NOTHING, USELESS PIECE OF S—!” He wailed, “Aw, honey, stop, you’re breakin’ my heart!” He was fully cowering now, seeking shelter behind their little pop‑up trailer tent. Now we couldn’t see anything, but heard a string of her obscenities punctuated regularly by loud thumping sounds and his continuous wailing. What could we do? The ranger station was a mile away—and who would believe us about husband abuse, anyway? Should we intervene? We just stood there at our site, frozen with indecision, and breathed a sigh of relief when the noise subsided.

Five or ten minutes later, I ventured forth from our campsite to fill up our water jug at a nearby spigot. It was then that the Leviathan intercepted me. The horror! I was transfixed by her giant face, oversized and yet sunken, like a cinnamon roll; her eyes, huge and black; the faint mustache beneath her flared nostrils. I could imagine the tabloid story: CAMPER MAULED BY BIGFOOT. But then I realized she was almost in tears: “I’m so sorry!” she wailed. “I came over to apologize for my foul mouth back there. I’m just so sorry you had to hear such bad language!”

Language? Heck, I’ve heard far worse language—but never wielded like a club by one spouse against another. And did this beast actually think I’d failed to hear her thumping on her husband?

She was pathetic, somehow, and yet so fearsome, all at once. A smaller woman who hadn’t just battered her husband might perhaps incite some sympathy and understanding—but not this brute. For her to be capable of contrition and embarrassment—well, it seemed absurd! How could she be sorry? How could she be embarrassed? She was evil incarnate! Her trembling was real, her manner sincere, and yet I almost expected her, like a Star Trek villain, to suddenly shake off her humanoid appearance and become even more sickening, the hideous alien being that she actually was.

Had I been closer to her size—i.e., if I’d been a bodybuilder or something—I might have said, “Don’t apologize to me, you sicko! Apologize to your husband!” But no, she was formidable and very likely totally insane and in that moment I could almost relate to the pitiful cowardice her husband had shown. I wanted nothing but to be away from her. “Well, I just hope you two work everything out,” I said, finally. She retreated to her campsite, and we didn’t hear any more yelling or thumping.

Eventually the husband swaggered over to us, thumbs hooked in the belt loops of his shorts, head swinging from side to side, perhaps trying to look manly, even reckless. I almost expected him to say, “Okay, pal, go ahead, punch me in the stomach as hard as you can—I dare ya.” Instead, he said something unintelligible and when I responded, “Pardon?” he cringed and took a step back. Then he gathered himself, lowered his head again, and took a few more cocksure steps forward.

He spoke: “Yeah, well, the old lady, yeah, she locked the keys in the car. I tried to get ‘em out.” He looked up at us and shook his head a little to the side. He was almost bald, was missing a lower front tooth, and wore thick glasses that eclipsed much of his face. His head looked too big for his body. “Thought I could pry the window open, ya know. Busted it, tryin.’” He did something between a sigh and a drawn‑out “yep.”

He went on to tell us about his character. He’d saved people in two different plane wrecks, he said. “You know, I’m the kind of guy where, hey, if a guy yells ‘help,’ I’m there, ya know? Just my character.” He looked down again.

“So you consider yourself a caring person?” Erin suggested. The man replied, “Yeah, my mother was in the hospital last couple years, dyin’ of Alzheimer’s. Had to take care of her. Very tough thing to do. You have no idea . . . it takes a toll on a person, it really does. Takes a lot out of ya.” He paused again. “You don’t get in any kinda trouble, do ya, driving around with a broken window on your car?” We assured him it was no big deal, citing examples of windstorms and earthquakes that broke windows across a city. A fix‑it ticket at most, Erin said.

The man talked some more, saying he was from New York but moved to Vermont to please his wife. He said he still doesn’t like the place. “How long have you two been married?” Erin asked. “‘Bout a year,” the guy said.

This amazed me. I figured a relationship as pathological as this would take a lifetime to build up—a long cycle of bad habits feeding off of one another. But no, these two must have been naturals at marital strife. The man talked some more, saying how he had cancer but it was in remission. “My disability checks will make my wife a rich widow,” he said several times.

Then he asked us how much cash we carry with us. I’m not kidding, he actually asked this. “None,” I said quickly. “We write checks or charge everything.” He said, “I’m not tryin’ to rob you or anything, just curious.” He talked some more, and then asked, “How much are your bikes worth?” This guy was coming off stranger than ever. He mentioned his wife becoming a rich widow off his disability checks one more time.

By this point we had our bikes fully loaded, and all our gear secured, and he asked us where we’d been camping. We told him, and at the name of one campground he gave a little chuckle. I asked why, and he said, “Well, heh heh, those guys didn’t like me too much. Yep, got in a bit of trouble over there, a bit of trouble with the law.” He paused, definitely for effect. “Truth is, I’m a bit of a rebel,” he proclaimed.

I almost laughed, which would have made me feel pretty bad. As absurdly and darkly comic as this fellow’s utterances were, his situation seemed tragic. Erin and I said our goodbyes and began to roll out, and the guy was still shaking his head and muttering as we pedaled off. We were so awestruck by the whole ordeal that we totally forgot to visit the Ben & Jerry’s factory in Waterbury that day.