A Tribute to Steve Tilford

This post is a tribute to the late cyclist and blogger Steve Tilford.  I have a tale of his to share, which I wrote down shortly after hearing him tell it a decade ago.  It’s the kind of amazing story he’d have eventually told on his blog, if only.  If only.

Steve was tragically killed in a car accident this past week.  Friends and fans are reeling.  Fans include not only those who have followed his decades of cycling exploits, but those who have enjoyed his popular blog, stevetilford.com.  He was one of my cycling heroes as a teenager, and I’ve enjoyed his blog for years. 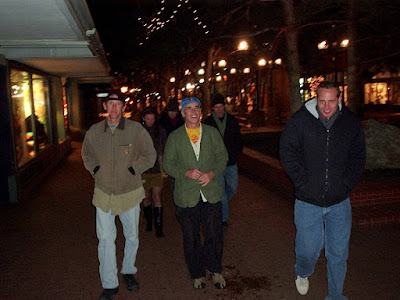 Getting to meet Steve

I met Steve only once, at a Coors Classic bike race reunion held at University Bikes.  (I snapped the above photo that night.)  The occasion was a party that longtime Coors Classic director Michael Aisner threw to celebrate the release of a DVD set—all the original Red Zinger and Coors Classic movies.  Aisner opened the party to the public and it felt like everybody in Boulder was there.  Afterward, he invited my brother Max and me along to get some pizza and beer with Steve Tilford, Steve’s partner Trudi, Todd Gogulski, and a few others.

We lingered for hours swapping bike race stories, until the busboy was practically vacuuming under our feet.  Steve’s stories were particularly good because for one thing, he was a natural-born storyteller, and for another, some of his stories were totally new.  This was a guy who never stopped racing, and whose everyday life was like some crazy story.  For example, just four days before this night, he’d been in a cyclocross race and veered off-course, rolled out onto a frozen lake, watched in horror as the ice broke, became completely drenched, and yet climbed back on his bike and raced six more laps—his hands totally frozen and unable to work his bike’s shifters—and won the race!  (Steve’s account is here; the cyclingnews story is here.)

I was planning a freelance article about the Coors Classic party, so I wrote down the best of these stories the next morning, as close to verbatim as I could get.  Some of them are on Steve’s blog, like this one about bunny-hopping a stream at 60 mph during the Milk Race, a huge stage race in Great Britain.  On his blog, Steve wrote, “I have millions of stories from my time in England. I could do a month of posts on them.”  I wish he had!  But this wasn’t a guy who lived in the past—he had too many new things to blog about.  Thus, my favorite of his stories isn’t on stevetilford.com, so I’m going to share it here as a tribute.

(I feel as though I have Steve’s permission, because I asked him that night if I could recount his stories in my article.  He said sure, and joked, “You can even make stuff up if you want—just make me look good!”)

Here is Steve’s story, presented just as I heard it, to the best of my recollection.  It’s about the 1985 Milk Race:

It’s the last big stage of the race and the last chance for somebody to win the race away from us.  We’re really worried about the Russians, who are supposed to be really fast on the hills, but when we get to the first big climb they all just get dropped.  I said to Andy Paulin, look, the Russians are all dropped!  And of course he’s a huge guy so it’s not like we were going that fast.  We get to this descent and are just flying down it, and when we come around this curve some guy is coming at us with his car.  Andy hits the car and just goes flying.  I figure he’s probably dead.
Now, everybody says I laid my bike down on purpose so the crash wouldn’t be so bad, but that’s not really what happened.  When you break a leg and a collarbone, it’s not because you crashed gently.  I go sliding under the car and stop when my bars get stuck between the ground and the bumper.  I’m pretty f---ed up but I know it could be worse.  So when they put me in the back of the ambulance I can tell I’m about to lose consciousness, it’s like a black tunnel is collapsing over me, and I look up at Trudi and say, “What about Andy, is he gonna live?”  She says, “Oh, yeah, he’ll be fine.”  Now I’m slipping away but before I do I’m like, “Wait—what about me?”  But it’s too late, I don’t even get to ask.
So they take me to this tiny hospital in the middle of nowhere where every other patient is an eighty-year-old man, and at first I’m stoked because I’m this young American guy among all these good looking English nurses.  I’m getting these nice sponge baths and everything, but then they tell me the doctor only comes once a week!  I’m pretty sure my leg is broken but all I’m getting is sponge baths.  Finally the doctor comes and tells me, yeah, it’s broken, and I’m looking forward to the plaster cast, but instead all I get is a nurse wrapping it in an Ace bandage!  Even so, I made out better than Andy.  He was at the other hospital and got sick of being there, so he just left, only to pass out at a train station that afternoon.  He made his way back to the hospital, but they wouldn’t let him back in!

Here are a few links to Steve’s blog featuring (or mentioning) the Milk Race:

I Don’t Bounce So Well Now

One of the Coolest Race Moves I Ever Made

A close friend of Steve Tilford’s, Vincent, is maintaining the blog, providing news in the aftermath of this terrible accident, and offering friends a way to share their own stories.  You can click here for details, and visit the main site, stevetilford.com, for the latest updates.