My Father’s Things ... Looking For a Home

This post is about getting rid of my late father’s stuff. Not the valuable stuff, like his house and his car (which have new owners), but all the rest of the stuff that meant something to him, and possibly even to somebody else (given that there are over 7 billion people in this world).

You’ll get to see some of this stuff showcased below, in case you want any of it. But I’m also going to proselytize a bit about not accumulating stuff. You might find that amusing and/or a needed wake-up call.

There aren’t many activities sadder, I think, than going through a dead person’s stuff. The poor guy … his stuff outlasted him, and now he can’t use it anymore! In case the sorting activity itself isn’t enough to make you cry, it helps to get the Tom Waits song “A Soldier’s Things” in your head. Although I have just discovered there is some debate about the meaning of this song, I take it to be about a yard sale for all the stuff a soldier left behind when he didn’t make it home.

Some time ago I went through a similar process with the bike gear left behind by a friend of mine who drowned. That was almost unfathomably tragic but at least I had the satisfaction of finding good homes for the vast majority of the stuff. Many friends bought his old bike components (with the proceeds going to Mark’s widow) simply because they wanted something to remember him by. I myself am enjoying Mark’s old rollers, and I suspect I’m using them more than he even did.

But with my dad’s belongings … well, it’s all just such weird, arcane stuff. My dad realized well ahead of his death that he ought to do something with all of it, since it’s not really anything you could offer up at an estate sale. But by that time he was so old and sick, I found myself suggesting that he not spend his last months or years on this Earth getting rid of it all. I suppose it was reasonable advice but now I’m dealing with the aftermath.

A bit of advice

If you’re the hoarding sort, as I’ll confess to (somewhat) being, it sure doesn’t hurt to pair up with somebody with the opposite approach. My wife has a strong aversion to almost all physical objects. A running joke in my household is that I have to keep moving, or she’ll drag me out to the curb. As her most recent birthday was approaching, I suggested that I find some object in the house, gift-wrap it, and announce—as she opens it—that I’ll get rid of it before the end of the day.  She was delighted by the idea—and not just as a joke. She’d have actually been thrilled (though I couldn’t bring myself to actually do it).

But even if you aren’t lucky enough to be mated to an anti-hoarder, here’s a suggestion: as you approach retirement age (but while you’re still energetic and have your wits about you), go through all of your belongings and ask the following questions about each object:
If the answer to all three questions is any version of “no,” get rid of the object. If the answer to the third question is “yes,” ask yourself a follow-on question: would my kid(s) want this now? If so, offer it up. If your offer is declined, maybe you answered the question wrong (i.e., you should jettison the object).

Okay, let’s get into the stuff itself. Some of it my brothers and I are keeping, like an assortment of beautiful, expensive-looking prisms. (There are dozens of them, weirdly enough, so if you have a thing for prisms, let me know.) Obviously some stuff has sentimental value, like the homemade coat rack with our initials carved in the base, and thousands of photo slides, most of which nobody has ever laid eyes on before (since slide projectors take so long to load up). But the vast majority of the stuff had value only to him (and perhaps not even much value, as most of it spent the last few decades out in the garage or moldering away in boxes).

Exhibit A is his recumbent tricycle. Five of the six members of our family find the original, classic bicycle design to be a rare example of perfect functional elegance. The recumbent makes about as much sense as microwave popcorn (i.e., none at all). When I see a person riding a recumbent I feel terribly sorry for him. He looks like a tortoise flipped over on its back. Oh, these recumbent riders try to look like they’re enjoying themselves, but they’re not. There is actually no logical way to explain this recumbent-riding behavior except a nerdy person held prisoner by his own iconoclastic yearnings. When my dad purchased this tricycle, to replace the recumbent bicycle he never quite managed to learn to ride, I was dead set against the idea (but I kept my mouth shut … there’s simply no point arguing with an iconoclast). He never ended up riding it much because it hurt his neck.

But anyway, perhaps you’re a weirdo yourself and think a recumbent trike is a fine idea (the product does, after all exist), so here’s a movie showcasing it. I will confess that my narration of this video flies in the face of everything I’ve just typed.

And now, on to the telescopes. Why don’t I want these for myself, you ask? Well, the Bay Area isn’t exactly a great place for astronomy. If you want to see anything cool, you have to take a trip to the middle of nowhere. I’m a true family man, so I don’t fancy the idea of a solo astronomy expedition. And I can’t bring my family on such a trip, because I’m married to The Woman Who Ruined Astronomy.

Here’s what happened. Like twenty years ago, before we had kids, my wife and I did a mountain biking vacation in Moab, Utah. My dad drove down and met us. We were camping in Arches or Canyonlands, and the astronomy was superb. Thus, my dad—a fanatic stargazer—gave us a free (if unsolicited) astronomy lesson that lasted, it seemed, for at least a couple of hours. I have to confess, when I peer through the eyepiece of a telescope I seldom see anything interesting. Often I think I’m only seeing the reflection of my own eye. Sometimes there are little pinpricks of light. It all just seems so pointless and arbitrary. The constellations? I have no use for them. I can recognize Orion’s Belt, and the Big Dipper, but all the rest? Forget it. Anyway, at some point my wife heard a noise. We were at a totally deserted campsite pretty much in the middle nowhere, and that sound could have been anything. A wolf, a puma, maybe even a Sleestak! So my wife turned on a flashlight and shone it around. This, of course, spoiled everybody’s hard-won night vision. My dad snapped, “Thanks a lot. You just ruined astronomy.” I guess it didn’t occur to him that she valued her own safety more than the wonders of the celestial heavens. My dad’s utterance instantly became a classic quote, trotted out regularly to this day, pretty much whenever somebody notices the night sky.

I wish I could have seen my dad in his element, holding forth at a star party to people who actually cared about astronomy. Surely he was everybody’s hero in that exalted realm. His telescopes are amazing. One of them in particular seems to be a crazy hybrid of state-of-the-art commercial technology and his own carpentry. My dad actually worked on the Hubble Space Telescope, fixing this giant flaw that originally plagued it. He was the real deal when it came to aerospace and optical engineering. It’s really a crying shame that although my dad had four sons, not one of us appreciate astronomy enough to want this stuff, but that there’s what it is. Anyway, here are a couple of videos showcasing the amazing telescopes themselves along with the crazy menagerie of tripods that supported them. If you are serious about astronomy, give me a shout and claim one or more of these for yourself. (Note: if you’re thinking of using one of these to spy on your sexy neighbor, consider that you would probably end up getting a very good look at his or her pores.)

Now, scopes ain’t all that he had … all kinda crazy shit was in this baller’s pad. (I’m paraphrasing Ice-T because that’s what my dad would’ve wanted. No he wouldn’t.) He also had all manner of useful, high-tech instrument. Unfortunately I can’t identify much of anything. I know that he built a number of interferometers, unmatched perhaps by anything ever produced by anyone, but he apparently didn’t save any of those. Suffice to say, the instruments in his collection were all top-of-the-line, made in America because nobody else knew how to build this stuff. Check it out:

Hey, wait! The video did not capture everything. Here are yet more instruments: 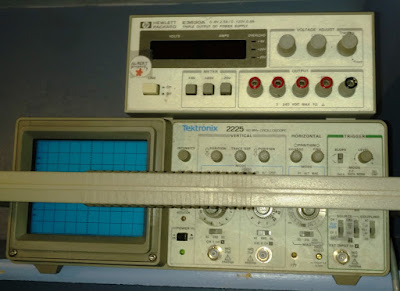 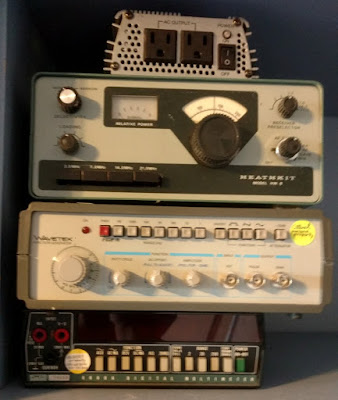 Here is a close-up of the two grooviest instruments: 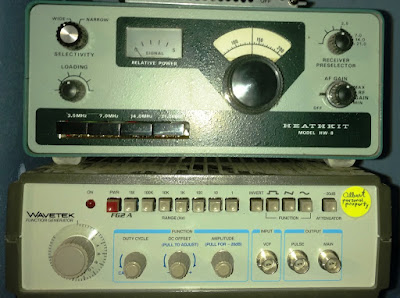 Wow, what a lot of cool stuff. Probably the Smithsonian museum would love this stuff. Or maybe the Antiques Roadshow would pay a mint. Or some mad scientist would give anything to get his or her hands on it (either to put it to good use, or to store it in his or her house for a decade or two). Anyway, it’s free to a good home.

And now for one more thing: the Hewlett Packard 85 computer. As described here, this bad boy cost $3,250 back in January of 1980, which equates to over $10,000 in today’s dollars.  It sported 8K of RAM. (To put that in perspective, a decent modern laptop has 1.5 million times as much memory.) The HP-85 was a good investment: my brother Bryan and I both learned how to program on that machine, and one of us makes his living writing code. (Hint: it’s not me.) Here’s a print ad for the HP-85, followed by a video: 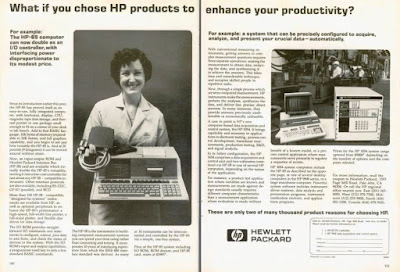 Some years ago, my dad offered me the computer. I politely declined, because I just couldn’t imagine myself actually making the time to mess about with it, and my kids would be even less interested. So it would just sit around taking up space. Well, I should have accepted, because that would have made my dad happy, and now here I am storing the damn thing anyway. (In a storage locker, no less, because I couldn’t bring myself to take it to the Goodwill or a disposal center.)

So, if you want any of this stuff, let me know—and if you don’t, forward this post (via this link) to everybody you know, and hell, even a lot of people you don’t know, and have them all do the same. Threaten them with bad luck if they break the chain—whatever it takes to find the right home for all these things! You’d be doing me and my father’s memory a huge solid.