As everybody knows, Google Autocomplete is a function of Google Search that starts providing feedback even before you’re finished typing your search query. The search engine predicts what you’re searching for based on what others have searched for (among other things). As such, it’s a good indicator of where people’s heads are. In this post I examine the national zeitgeist as of March 31, 2018. (To some degree Autocomplete is regional but I’m not going to worry about that right now.)

No, I’m not the first person to do this. But since you’re here, roll with me for a while….

To start, let’s see what people worry about being busted for. This should showcase an interesting array of guilty consciences and/or unfounded worries.

Typing “is it illegal to” yields the following Autocomplete suggestions:
So far, it appears a majority of Internet searchers are unpatriotic free spirits who hate wearing shoes, didn’t study very hard for their driving test, resent their own wealth, and would run away from home if they weren’t worried about being arrested.

Changing our query to “is it against the law” doesn’t change much except we get “to threaten someone,” “to not file taxes,” “to spit on someone,” and “to cheat on your spouse.” So the America-hating, wealth-hating free spirits who are miserable at home are also adulterous and gross.

“Can you be arrested for” causes Google to add “speeding,” “slander,” and “jaywalking,” which all fit our emerging profile  of the scofflaw, irreverent American. Bringing in the search term “imprisoned” yields Autocomplete suggestions like “for a debt,” “for not paying taxes,” and (perhaps most alarmingly) “for drink driving.” (No, that’s not a typo. I mean, it’s not my typo.) Seems that a lot of these social degenerates are misbehaving first and asking questions later.

“Can a police officer” … take a guess. Get a date? Be a winner? No, but nice try. Autocomplete suggests “search your car,” “lie to you,” “take your phone,” “take your car,” and “threaten you.” So it looks like these miscreants expect to get back as bad as they give.

If we back off the legal aspect and soften our query to “are you allowed to,” the suggestions get a bit softer, too:
It’s perhaps worth noting that these misanthropic lawless hooligans can’t be bothered to try to spell “marijuana.” Try searching on “is smoking w” and you’ll get a full rack of weed-related Autocompletes: 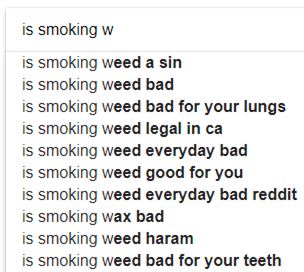 But searching on “is smoking m” doesn’t even begin to suggest marijuana: 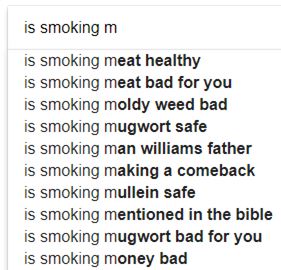 Whoah, that’s a weird batch of Autocompletes. I saved you the trouble of looking up what “smoking money” means … it’s using dollar bills as rolling papers. Why would anybody do this? Could Zig-Zags cost that much? (Believe me, I’m the wrong guy to ask.) Mullein is some kind of flower that people are evidently seeing fit to smoke. Ditto mugwort. So apparently our carefree, resentful scofflaws are burning money for a reason; will get high on just about anything; and are approaching 50 and fearing some kind of pushback if they leave workforce. If all this weren’t strange enough, they’re also thinking of taking the GRE.

Okay, there’s more to life than finding out what we can and can’t get away with. There are larger, existential questions like who, what, where, why, and how. Searching on “what is,” the top five suggestions I get are:
The first suggestions merely tells you when I started researching this post. The bitcoin response suggests either a fascination with alternative currencies or the never-ending quest to get rich quick. So which is it? Well, considering that my thorough explanation of bitcoin has not gone viral, probably the latter.

The question “what is my IP” is a pretty silly one, because most people have their IP address dynamically assigned via DHCP, so the concept of “my IP” is about as useful as smoking dollar bills. So our freewheeling unpatriotic ne’er-do-well, though he may despise paper money, likes the idea of cryptocurrency and wealth, even if he’s a bit confused about the Internet and/or retiring at 50.

As far as “rambler,” that’s a very good question … after several seconds of painstaking research I’ve determined that it’s the nomadic hobo, which for some reason takes lupine form, that is the mascot of Loyola-Chicago’s sports teams. Apparently the average American, while not driving barefoot to an extramarital tryst and/or smoking weed, is watching sports while pondering the deep questions that activity produces.

Moving on to the question of why, we’re presented with a laundry list of compelling mysteries:
I know just what you’re thinking: even though you aren’t personally a person who madly changes lanes right in the middle of an intersection while “driving drink,” or smokes weed on an airplane, spits on people, and hopes to get rich via bitcoin, you really would like the answers to those pressing questions. So I’ll save you a Google search:
Moving on to “who is,” we discover that the cash-smoking moral degenerates of our time are more interested in Snoke (a Star Wars character) than Jesus, though at least Jesus took second and third place. Next up is “the richest person in the world,” who better watch out lest his cash get burned up (whether out of spite or as joints). Rounding out the podium we have Marshmello, an electronic dance music producer (probably responsible for the music people listen to while smoking mugwort and watching the Loyola game with the sound turned off).

“Where” gives us these suggestions:
So the freewheeling adulterous drink-driver isn’t so anti-money that he isn’t impatient for his refund, and meanwhile wants to get rich on Ripple, which I’ve learned is like bitcoin. He doesn’t know where he physically is, which is what you get for rolling up plant matter in paper currency and inhaling.

I’m going to guess that Loyola made the Final Four … good job, Ramblers!

But what the hell is xur? Oddly, when I Google “what is  x,” Autocomplete doesn’t suggest “what is xur.” It suggests instead, “what is xur selling.” And when I google “what is xur,” the first result is “Where is Xur? Find Him here and See What He’s Selling.” In fact, the whole first page of responses deals with Xur’s location and what he’s selling. Now, I’m not about to be arrested because the cops track my IP address and bust me for trying to buy a bunch of Xur’s illicit products. So I’m not going to whereisxur.com. I looked up “xur” on Wikipedia and—check this out—there’s no entry. When’s the last time that happened? Suffice to say, if you want to know anything about Xur, you’re on your own.

And finally, the big questions all having been investigated, we reach the practical matter of how:
I guess it just figures that a person who cheats on his or her spouse, spits on people, and smokes weed on airplanes would also be painfully active on social media, ignorant of basic weights and measures, and unable to tie a necktie. But making slime? Is this really the new national pastime? God we’re a weird populace.

So far I’ve focused on Internet searches regarding the present. But where, as a people, are we going, or do we hope to go? To find out, I typed “am I going” and Autocomplete dished up a laundry list of common fears:
Next I typed “will I” into Google, but unfortunately this yielded a number of false starts involving the musician will. i. am. To jettison these I changed my query to “will I ever,” and the result was possibly even sadder than “am I going”:
The thing is, these are tough questions that would require a lot more information than a Google query can give (even with Google and other cookie-enabled agents presumably tracking our every move on the Internet). It strikes me that the people asking these questions (and thus making these the most popular queries) are using Google less as a search engine and more as a Magic 8-Ball. So why not just do that?

I tried this by going to www.ask8ball.net. (Note that this site isn’t encrypted so you better not ask anything too private.) I asked it, “Will I ever be happy again?” and got back “Concentrate and ask again,” followed by “Without a doubt.” (This isn’t as complete as “Wait … aren’t you happy now?” but I’ll take it.) Disconcertingly, before ask8ball.net answers, it briefly presents the message “Contacting Oracle.” This makes its responses seem less like magic and more like a database lookup. But then, isn’t that just like the Internet?