I have a teenager who is a junior in high school and will apply to colleges this fall. Through her advance work and the helpful advice I have received from other parents, teachers, articles, and the community at large, I have learned a lot about the modern admissions process, and want to pass this information on to you. Even if you don’t have a teenager applying for colleges any time soon (or at all) you should read this anyway, for the schadenfreude. 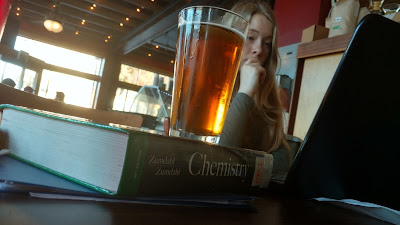 Note: the beer in the photo above was mine, not my daughter’s. I want to be very clear on that.

Is it harder to get into college now?

Of course it is. By way of illustration, tuition at UC Berkeley—which cost about $2,000 a year in 1992—now costs about $14,000. But that’s probably not a good example because there’s no way your kid will get in there. Nobody gets in there anymore, except a few insanely successful students.

Is it important to tour the colleges my child is planning to apply to?

The conventional wisdom is that it’s pointless to tour a college that probably won’t accept your kid anyway. After all, this will only increase your kid’s heartbreak, while wasting your valuable time and money. But let’s be real here. College tours are important for two reasons. One, the college wants to see that your kid is serious about attending (in the event they’re even considering her). Two, you need to prove to your kid that you’re serious about parenting. She probably already resents you for having had it so easy, the way you soared effortlessly through the admissions process all those years ago. Don’t make things worse by being a cheapskate.

There’s a silver lining to the college tour, though: you get to brag about it. “Yes, we took our Priscilla to tour M.I.T. last weekend. She thinks it will be a great fit.” This might be as close as you get to being able to brag about anything college-related.

Is there any chance that my child will qualify for financial aid?

Is there any hope at all for a good college, or is my child doomed?

You claim that nobody can get into the top colleges anymore, but several of my child’s friends’ siblings got into the Ivy League. Perhaps you’re exaggerating?

No, those students are the exceptions that prove the rule. And their grades were of course much better than your kid’s.

Is there anything my child can do, beyond straight As and stellar SAT/ACT scores, to improve his college prospects?

Yes, if your child chases after every activity that could (say this with me) “look good on a college application,” and manages to gain entry into programs like digging latrines in Ecuador, enduring an unpaid internship at an important-sounding company, launching a startup, and/or paying lots of money for college summer programs, his application will be more competitive.

Does this actually help?

Probably not. But he has to do it anyway.

Is there any value in my child having fun, enjoying her summer, trying to relax, and basically being a kid while she still can, knowing that adulthood is forever?

Of course not. How could you be so naïve?

Do I need to remind my child how much harder it is to get into college nowadays?

No, pretty much every single one of her friends, along with her friends’ parents, her teachers, and her counselors are telling her this every single day. So, if you don’t feel like rubbing it in, you don’t have to. However, it’s important never to contradict your child when she reminds you of all this. Don’t you dare say anything absurdly false like “top colleges have always been difficult to get into.” This just undermines your student’s ability to blame the system for the cesspool of failure that she is currently wading into.

Should my child be talking all kinds of AP classes and exams?

Yes. These will (say it with me) “look good on a college application”—but only if your child scores high on the exams. If your child does poorly—which is probably a given, since the AP curriculum doesn’t match the Common Core, and because you’re probably raising your child in an inferior school district—than the AP strategy will backfire and make your child toxic to all good colleges. The good news is that the experience of taking these courses and exams will be really stressful, which is good practice for the rest of your child’s life.

I’m concerned about all the debt my child will take on, even if he goes to a mediocre college. Is the cost of tuition really a good investment?

Probably not. The only people making any money anymore are genius coders who launch tech startups. But since your kid isn’t going to be one of those, you kind of have to toss the dice on an expensive education.

Okay, I suppose there’s still money to be made in law and medicine. But don’t get me started on the ruinous amount of debt grad school involves.

Is there any benefit to going to college other than the possibility of realizing a fiscal return on your tuition investment?

It seems intuitively obvious to me that only STEM curriculums have any value, since the entire point of a college degree is to increase your income potential. And yet, some students do still pursue liberal arts programs. Why is this?

It’s because they’re idiots, married to antiquated notions like there being value in understanding and appreciating literature, nurturing curiosity around abstract ideas, knowing arcane things like the plural of curriculum actually being “curricula,” and so forth. Don’t worry, society will soon be rid of these helplessly impractical people.

My child slaves over his schoolwork, is preparing tirelessly for his SAT exams, is involved in multiple extracurricular activities, and has digested enough information about the college application process to write a thick book on the topic … and yet he is still totally stressed out about the process, with little hope for a positive outcome. Is there anything else he can do?

Yes, he should continue to worry as much as possible. This will drive him to unturn even more stones, because there must be some way to break through this impossible college entry barrier.

You just used the word “unturn.” Is that even a word? And if so, will it be on the SAT?

In fact, it is not a word. “Unturned” is a gerund adjective, but this is one of those weird cases of a gerund that cannot be used as a verb. And while “unturn” isn’t on the SAT, your child better know what a gerund is, even though he’s pursuing STEM, because that’s just how this game works. Your poor kid. You better go give him a hug.

Can things like hugs make my child less anxious about college applications?

No, I was kidding. Hugging your kid is just wasting his time. Don’t be so ignorant and sentimental.

Is there any silver lining to my child ending up at an inferior school?

Yes: the coursework might be manageable. At the top universities, where every single student admitted has an absolutely perfect track record, there will be professors who give Bs and even Cs, which these students have never received in their lives. The shock of this “failure” could cause major angst, even complete nervous breakdowns. But your kid, who has already learned to deal with blemishes on her record, can finally relax a bit once she is actually in college. Which brings us to our next question:

Are there good career prospects for college grads these days?

No. Getting a good job was so much easier back in our day. In case you were feeling pretty good about being gainfully employed, just stop.

For a complete index of albertnet posts, click here.
Posted by Dana Albert at 9:43 PM