I’m enchanted with the spoken track “The Pontiac” on the Tom Waits album Orphans (Brawlers, Bawlers & Bastards). I won’t try to describe it—just click here to listen. I played it for my daughter who said, “You should do your own, about your bikes!” So here it is.

So, first of all I had the Fuji Junior. It was a tiny little bright red ten-speed, 24-inch wheels, stem-mounted Suntour shifters with little plastic condoms on them. I was ashamed at the “Junior” part and painted over it with touch-up paint. Now, your uncles all had Motobecane Nomades, which kind of made me jealous at the time because they were French. They all had those shitty plastic Simplex derailleurs and shifters but my brothers pretended they were kickass. Your grandpa had a weakness for French bikes. His was this weird crappy Gitane, I couldn’t tell what color it was, I even asked my dad, he couldn’t say either. Even your Grandma Jude had a French bike, also a Gitane, women’s mixte frame, narrow rock-hard plastic saddle—she hated it, I only saw her ride it once.

So, after the Motobecanes, Uncle Geoff and Uncle Bryan upstaged me again with these Libertas racing bikes from Belgium. Now they were pure shit, terrible lugwork, little specks of excess flux the builders couldn’t be bothered to sand off, but the bikes had flashy head tube decals and really skinny tires and I was in awe.

My next bike was like sensible shoes, a Miyata 310, $265 plus tax in 1981—gosh, two decades before you were born. I tricked it out with Suntour Superbe Pro brakes and pedals, handbuilt wheels I bought off your Uncle Geoff: Phil Wood hubs and Weinmann rims, laced radially which was almost unheard of back then. Stronglight cranks, drilled-out chainrings which was pretty badass. Concor saddle which had just come out, kind of radical at the time, I had the Supercorsa which had steel rails. I sold that 310 to Joel Linsky for $515; his mom was furious.

Now your Uncle Max had the Univega Viva Sport, he took off all the decals, slapped on some Dia Compe 500G brakes, tried to pass it off as a Colnago.

My first pro bike was a Mercian Colorado, Reynolds 531 with an SL fork, a beautiful color they called champagne pearl, really gorgeous, a bit like the color of a fawn actually. Bought that from my pal Nico. A couple months later we were riding at night and I piled into a curb, bent the frame—crumpled the downtube below the shifter bosses. Heartbreaking.

I had another Mercian, white with red panels, gorgeous, and I had my first victories on that bike before selling it to your Uncle Max who’d fallen in love with it and couldn’t live without it. From there I got into more Miyatas, there was the ’83 Pro, then the ’83 Team I bought off of Towle, he got it from Andre Claussen, I traded that to your Uncle Geoff for the ’84 Team he’d become too short to ride after the car accident. I had eight Miyatas … loved ‘em all. Not that they were actually that good … kind of heavy, top tubes too short, and the 73 head angle wasn’t aggressive enough.

After my ’86 Team Miyata’s fork broke at nationals I bought the Guerciotti SLX from Dave Feingold for $400. It was a 10 Speed Drive team issue, red white & blue fade paint job, so I named it Bomb Pop. God I loved that bike. Long top tube, 74 head angle, 72 seat, low bottom bracket, it just handled so beautifully. Indexed shifting never worked on that bike so I ran it with the Simplex Retrofriction shifters. I had some of my best races on that bike. In ’96 I bought a brand-new Dura-Ace gruppo for it, laced up a fresh set of wheels. Two weeks later I was riding on the Golden Gate bridge, sprinting, and the fork broke. Steerer tube sheared clean off—I piled face-first into the concrete, headset bearings rolling everywhere, I needed a bunch of stitches. Still, that was one of my favorite bikes. Well, that was a long time before you were born.

Here I’m on the Fuji during the 1981 Red Zinger Mini Classic. Look how small we are. 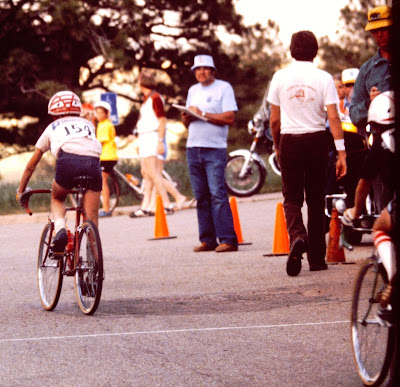 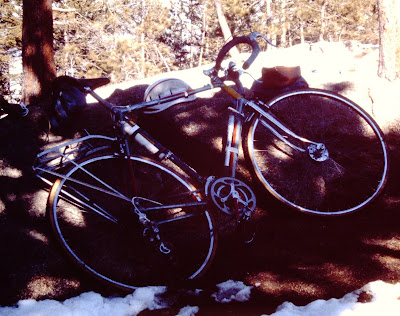 Here’s my mom’s Gitane. Man, what a hateful bike. She didn’t even want the mixte-style frame but Dad insisted. 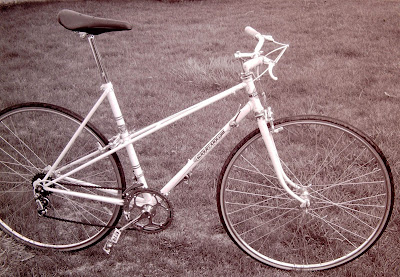 Here’s Bryan on his Libertas at the ’81 Mini Zinger. 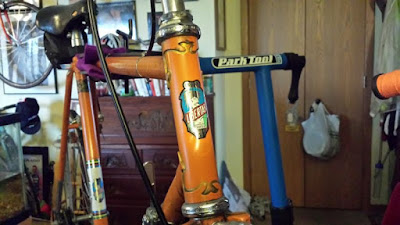 Here’s Max  on his Univega, also from the ’81 Mini Red. Notice how his poorly pinned number is coming off. 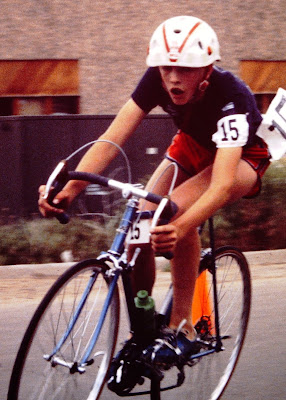 Here’s the Dia-Compe 500G brakes Max had.  He was so proud of them. I can’t find a photo of the drilled levers, though. 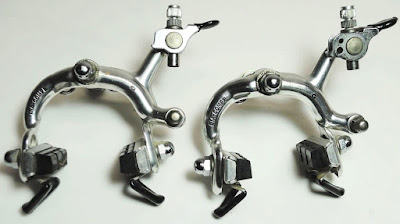 Here’s the Miyata 310—I’m #62, straddling it—and also the Mercian Colorado with Nico on it (in the race leader jersey), at the 1982 Mini Zinger. I bought the Mercian off Nico later that year. 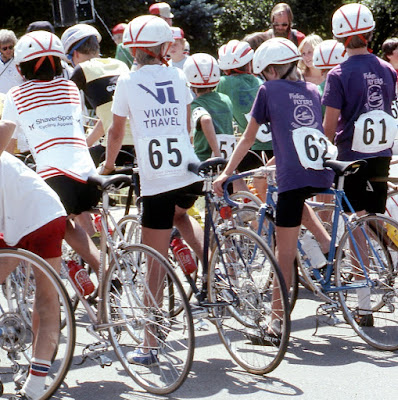 Here’s my dad’s Subaru (which did not run off gasohol, by the way) with (from left to right) Max’s Univega Viva Sport, Geoff’s Univega Superstrada, our dad’s Trek, and Bryan’s Libertas (which he got from Geoff after his own Libertas broke). 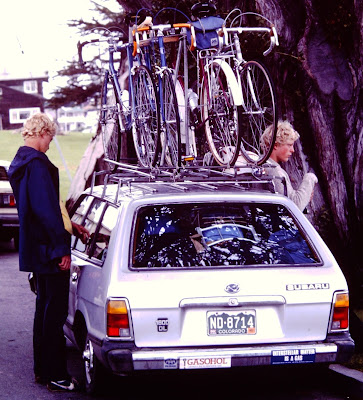 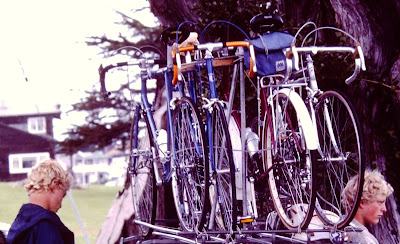 Here’s my college roommate on my ’86 Team Miyata. 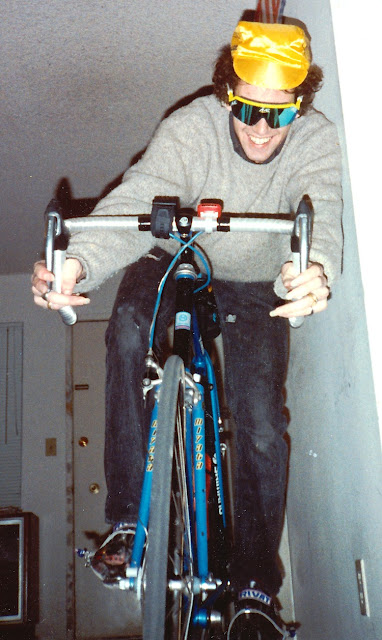 Randomly, here’s a pair of pages from a bike magazine showing two of the bikes featured in this post. 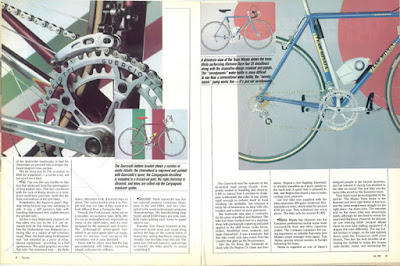 Here’s Bomb Pop during its heyday. 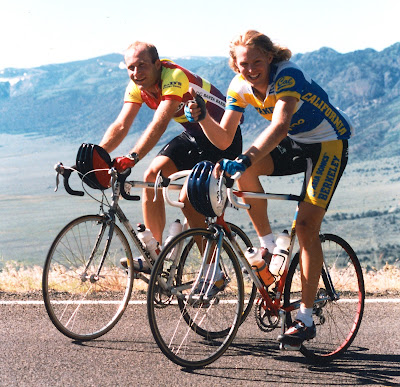 I still have it, but it’s not safe to ride. 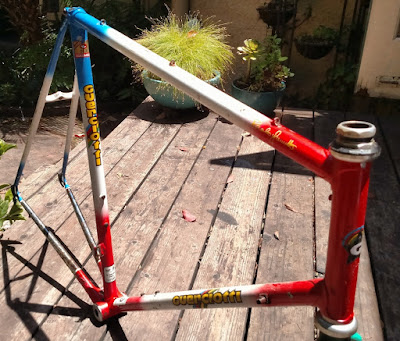 Of course my daughter Alexa gets a shout-out for suggesting this post & the recording. I am grateful also to my daughter Lindsay for doing the excellent camera work, holding my phone very still with it trained on the slide show playing on my laptop while I did the audio.

There are a couple of severe goofs in the video that you probably laughed at already, owing to my needing to get this done in one take. First is complaining about the 83 head angle on my Miyatas being too shallow; of course I meant 73 (as 83 would be impossibly steep). I also stated that the head tube on Bomb Pop sheared clean off; of course I meant the steerer tube.

If you enjoy “The Pontiac” as much as I do, I’m sure you can’t help but be disappointed in my tale and moreover my delivery. What can I say? I’m not Tom Waits. But then again who is?