From the Archives - Horsefly Spider Smackdown!

Here is another bike touring tale from my archives. I had photographic proof of this remarkable incident, but this was 24 years ago and I can’t find the photo. Alas. 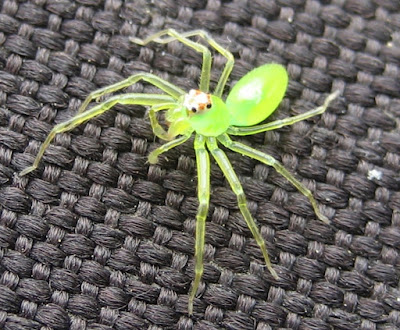 Stopped at a town along the way to Iowa, I had one of life’s great unexpected moments. While my wife talked to her aunt and then her mom on a payphone, I waited, straddling my bike, not doing much of anything. Then I saw a tiny lime-green spider on my front pannier. His front two legs on either side were twice the length of his body. When spinning a web, he would wave these front legs about majestically in the air, like giant batons. He was building an as-yet invisible web when I suddenly saw a small emerald-green horsefly land on the pannier, not so very far from the spider.

You can tell a horsefly by its giant, menacing proboscis, which can pierce cotton, denim, and even leather on the way to your skin. “Hideous blood-sucking parasite, I’ll kill you,” I swore. These creatures are mighty hard to swat—they seem to have better instincts than a housefly, perhaps as a result of dodging a horse’s tail all their lives—but I had bigger plans for this one.

Reflecting on the the three-week old scars still left on my body from the horseflies in Colorado and western Kansas, I decided I would catch this horsefly alive and feed it to the tiny green spider, who would slowly eat it alive over a period of hours. I stared at my prey and tried not to think of the tremendous odds against me. Could I possibly execute this plan? No point deliberating on the matter: in a perfect, miraculous Zen moment, I just struck out, as I would for a typewriter key on the home row, and got him.

I had to restrain myself from doing a victory dance and tipping over my bike. I looked at the doomed creature for a moment, sizing up his treacherous syringe, before holding him out before the spider. The green spider instantly recognized the largest buffet he’d ever stumbled across, and groped out for it. He couldn’t get a good enough purchase—the fly was larger than he by several times—and finally I just set the fly down near him. The fly was injured and thus struggled, futilely, to right himself. The spider walked towards him and then—amazingly—walked right by. I guess with six or eight eyes, you could have trouble with depth perception.

So this horsefly was struggling to fly away with only one wing, and finally gave up and crawled towards the end of the pannier and jumped off the edge, as if committing suicide to save himself the horror of being eaten alive. Furious, I picked him up off the ground and set him back on the pannier, and again the spider missed him. I was about to put him in the spider’s path yet again, when suddenly the spider shimmied up an invisible web he’d made, all the way up to my handlebar.

By this time my wife was off the phone, and ready to get moving again. Even on these long summer days, we always get a little antsy in the evenings about finding a place to camp for the night. (We’ve come up empty a few times and had to sleep under a bridge or in a pricey motel.) I was torn about whether or not to ask my wife to wait just a little longer so I could complete this spider-feeding operation.

Well, before I even had a chance to broach the topic, an old man pulled up in an RV, stopped, and jumped out to chat with us. He’d seen us from the road and made a special detour to see what we were about. I expected the normal volley of questions, the expressions of amazement that we’d come all the way from San Francisco, the excitement that with a whole nation to tour around in we’d chosen this little town to ride through, etc. But this guy didn’t actually seem that curious about our trip. What he really wanted to talk about—and did!—was his 20-foot Winnebago Atasca, and what great gas mileage he’d gotten on his trip over from Michigan (or maybe he was headed to Michigan; I wasn’t paying super close attention). He talked and talked, and my wife was anxious to go since we’d miles to go before we’d sleep, miles to go before we’d sleep . . . and there was the fly, and there was the spider, still, but I’d had to suspend my operation so as not to be rude, and my magnificent plan was falling apart before my eyes. Finally, the man drove off, waving, and I grabbed the fly once again. I told my wife, “Observe. I will feed the fly to the spider.”

The spider was doing laps around the circumference of my handlebar now, but I caught his attention, waving the fly before him, its helpless legs groping the air. Now I held the fly right spang in front of him, and the spider groped out for the prey. I swear that I could feel the tiny spider legs brush my fingers as he betook his purchase. Perhaps he was enclosing the hapless fly with a web; in any case, after 20 or 30 seconds he’d pulled it in. I let go, and to my delight the spider wrapped his tiny mandibles around one of the fly’s red eyes. Yes, yes, I thought, oh yes sweet spider, suck his fly brains out his eyeball. This was pretty much the most satisfying moment of my life to that point.

The spider rode on my handlebar for the next 13 miles, feasting on its still living, still twitching, grossly oversized prey. Then we stopped at a country store for ice cream confections and when we came back out he was gone,  and the horsefly with him.