From the Archives - A Rather Hostile Letter

I am very careful in these pages to respect people’s privacy. I don’t quote people, even anonymously, without permission. The only exception so far has been in the case of my late father because I can’t ask him, obviously.

The person quoted anonymously in this post is also now dead. Thus I feel I can now post this curiosity from my archives. 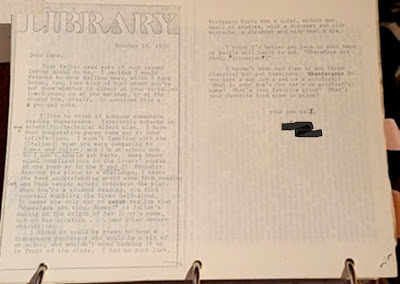 I had a verbally abusive boss whose favorite phrase seemed to be “pure, unadulterated bullshit.” And your recent letter, Miss W—, reeks of it. Let’s have a look at that first sentence:

“Your father read part of your recent letter aloud to me.”

The first couple of times I read this I unconsciously transposed a couple words, which created a different, probably more accurate version of the sentence:

“I read part of your letter to your father aloud to him.”

I rather doubt my father read the letter, or all of it anyway, because he’s never been able to make sense of my correspondence. This is not an intellectual lacking on his part; as we both know, he seems to be some kind of genius. That’s kind of the problem: he has always felt there are better things to do with his great brain than to try figuring out what I’m trying to convey in my letters. Am I just sucking up, or trying to imply some kind of affection? It’s too much hassle to try to decipher so I’m not surprised he located a secretary figure and in some very carefully worded and tactful manner said the rough equivalent of, “I don’t wanna deal with this shit; here, you do something with it.” (This is the same message I used to get from that old boss, but I respected him for it. After all, he was usually blowing off a creditor or something, not his son.)

But that’s just conjecture; perhaps my dad did read my letter; perhaps you didn’t. But what’s not in question is that you, the lady friend, did respond instead of him. I suppose you might expect me to be grateful, since you did take some trouble. But really, how warmly did you think I’d receive your letter, as a substitute? And did you think you’d endear yourself to me with your insulting tone? Consider Exhibit A, this quote from your first paragraph:

I decided I would respond to your mailbox woes, which I have known, too, that kind of hurt anger you’re not sure whether to direct at your so called loved ones, or at the mailman, or at the stupid box, itself.

Wow, “mailbox woes.” I guess you and/or my dad construed my letter as a self pitying plea for attention. Well it wasn’t. It was a plea for money. My dad is supposed to deposit money in my bank account every month (not because he’s generous but because he’s required to, according to a clause my mom wisely wrote in to their divorce contract). So the “hurt anger” you might think you know seems very different from mine. I have never been confused about where to direct my anger. My mailman is reliable and my mailbox is an inanimate object. I guess an elementary school student with a good imagination who reads about The Little Train Who Could might buy your cutesy personification but I don’t.

Most of your opening paragraph merely insults my intelligence, but its final sentence, “So consider this a pen pal note,” actually insults my feelings. It does not hurt them, it insults them. It insinuates that I’m just some poor lonely dork who sulks a lot about not getting any mail, a guy who would be just thrilled to carry on a correspondence with anybody, even his dad’s lady friend he’s never even met. My letter, if you’ll look closely (I’m sure you’ve got it right there), belabors the fact that since I never get letters from Dad, our relationship has become a purely financial one in which I simply write whenever I need money. It is this very specific relationship that I’m disappointed in. Building a new one, with a stranger, cannot replace or amend it.

It’s possible you just didn’t understand my letter, and thought the money part was just an aside. It’s also possible that you know exactly what the letter meant but you don’t want the old man to give away any more of his money because you’d like to get your hands on it instead. If this is actually the case, then I underestimated you. Perhaps you said to my dad, “Oh, don’t worry Harry, the lil’ bugger just needs a lil’ ol’ pen pal to write a lettery wettery to him. He’s just a lil’ lonely, that’s all.” My dad, pleasantly surprised that no action (such as a bank transfer) is required, settles back into his blissful ignorance and reminds you how wonderful you are, at which point you take a victory lap by writing me a transparently disingenuous letter, just to rub my nose in it. If this is the case, congratulations. You’re a real operator.

But it could be that both these theories are wrong. Maybe it’s you who feels lonely, which is totally believable if you’re counting on my dad for companionship. Even in these early courting days you must get the feeling his mind is somewhere else, such as some technical problem at work or some mathematical flight of fancy that is simply more interesting to him than anything you, an elementary school librarian, might have to say. Perhaps, seeing as to how we’re both liberal arts types, you think we could carry out a literary correspondence of high intellectual value. Based on your letter, you seem to be an expert on Romeo and Juliet. You’re absolutely right, “Wherefore art thou, Romeo?” is not a question of spatial location, but rather a question of Romeo’s name. What tipped me off to that is that “wherefore” means “why,” not “where.” I don’t know that I’d have described this as a “dense obscurity,” but perhaps I’m not quite reading it on as deep a level as you. But what I can’t understand is why, later in the letter, you wrote, “I’d better get back to work here or people will begin to ask, ‘Wherefore art thou, librarian?’” It’s as if you yourself were now using “wherefore” to mean “where.” Was this just a goof? Or was it a subtle dig at the baser intellects of the school kids, who are still on Curious George?

Speaking of Romeo … how are you and my dad doing? Has it crossed your mind that you might be Rosaline instead of Juliet? Perhaps not—perhaps Dad’s still on his best behavior. Well, every dog has his day and I guess you’re having yours. Live it up while you can, it won’t last. Once he starts to think of you as family, he’ll take you for granted just like the rest of us. Just ask either of his past wives. S— probably has infamous status in your estimation by now. Has he told you the sordid tale of how she made him fat by feeding him too much pasta? I’ve heard that about half a dozen times by now. Actually, I lived at their house one summer, and as far as I could tell, the mayonnaise burritos he made on the sly had more to do with his weight gain. The real reason he’s lost weight since she left him is that he’s too cheap to buy groceries, other than buckwheat flour, millet, and soy lecithin (cheaper than eggs, you know). And of course he always trims down when he’s on the make.

Now, if you have designs on marrying my dad, and taking over as my stepmother, bear in mind you have a tough act to follow. I liked S— for a number of reasons, one of them being that, as custodian of Dad’s finances, she put money in my account with the same regularity that my landlord expects from me. Now I have to deal directly with my dad, who thinks my financial affairs are all conducted in play-world, like I leave my money-woneys under the gub-gub tree for the billy-willy bird and if I’m late, it’s nothing but goop-whoop soup for a week!

I wish you could see my dad’s dismissiveness of me in its proper context, that being the truly magnificent repentance speech that he gave after S— bailed on him. This time it was gonna be different, this time he was gonna pay attention to those close to him, he would stop forgetting birthdays, he would start writing letters. I did get one letter since then, but it was a mass-mailed form letter boasting about his business trip to Hawaii. As for my birthday, he didn’t send a card because, he later explained, he didn’t know if I would be home to receive it.

It is because people like my dad will never change that it would be useless for me to mail this letter, and in fact I never intended to. I’m just blowing off steam. Your intentions in writing me were probably good, and I guess I can’t blame you for thinking I’m a sad sack who just needs a pen pal, since you don’t know me at all. How could you fathom the tortured relationship I’ve had with my dad, when he surely never talks about me (or my brothers)? How were you to grasp that my dad’s suggestion of you writing me was simply a way to get around depositing the money I asked for? You’re just a pawn in our stupid chess game. I thought I had my dad in check, but he marched you all the way across the board and made you a queen. I always hated that rule.

So yeah, you’ll never see this letter. I could send it to Dad, but that would be worse. First of all he would just get all twisted up and confused again, which oddly enough would make me feel kind of cruel since the guy just doesn’t get it, he can’t. When he decides to engage he can be a hell of a guy, so at times we get along well. I had a great time touring the Berkeley campus with him last spring break, for example, so it’s a shame I had to bring in all this unpleasantness around wanting the money he’s supposed to give me. Too bad this letter has no audience … I guess I’ll just put it in the archives, and maybe someday when I’m dissin’ my kids they can shove it in my face to show me what a fool I am.

Oh yeah, you wanted to know about my pets and their names. Sorry, I have none. No cats, no dogs, no goldfish, nothing to name. I know, it’s terrible, I’m so lonely. And yet even still, I will never be your pen pal.