Is it true you Northern Californians say “hella” all the time?

Yes, it’s absolutely true, we hella use that word here. (See!?) A UC Berkeley linguist asserts (as reported here) that the term originated in the Bay Area, probably in Oakland. I first encountered it as a student at UC Santa Barbara; someone had written “Lisa C is hella good to me” on the blackboard and my TA said, “‘Hella’? What’s ‘hella’?” I wondered the same thing (and also wondered, “Who is Lisa C?”). When I moved up north I started hearing “hella” a lot, and liked it immediately. I was particularly enchanted when I first heard it used to mean more than just “very” … for example, “I ate hella chips.” This term was added to the Oxford English Dictionary in 2002.

Since I’ve lived in Norcal for so long, I can’t be sure “hella” isn’t used everywhere, so I asked my brother Max, in Boulder, Colorado, if he hears it out there. He replied, “It is very rare that someone says ‘hella.’ When that is uttered here, it is answered with consternation, as though it threatens to upend our privilege.” 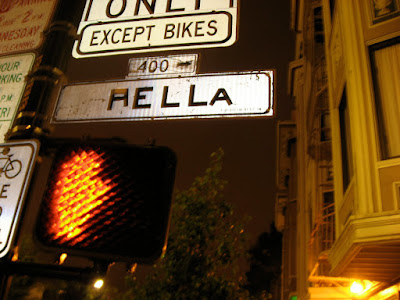 Aren’t you afraid of earthquakes?

I wouldn’t say I’m afraid. Of course I’m aware that earthquakes happen around here, and they can kill people, but it’s not a particularly significant risk. As Hans Rosling et al report in the excellent book Factfulness: Ten Reasons We’re Wrong About the World—and Why Things Are Better Than You Think, deaths from natural disasters have plummeted worldwide in the last eighty or so years, from 453 per million annually in the 1930s to just 10 per million today. That’s about a tenth of the risk of dying in a car accident.

I’m kind of more afraid of wildfires, but not enough to live somewhere else. The Midwest has tornados, the East Coast has hurricanes, the Great Lakes region has mosquitoes the size of Chihuahuas … nowhere is totally safe.

Is the French Laundry worth the hype?

I cannot say, as I’ve never eaten there. You have to be very wealthy, very organized, very well connected, and/or have naked pictures of God to get a table at French Laundry. Because it is such an utterly elite place, it is nonsensical to assume that just any Northern Californian would have any experience with it. Go ask Lance Armstrong. 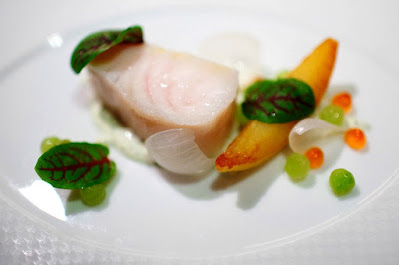 Do you get offended when people call San Francisco “San Fran”?

I don’t get offended by that, and in fact I’m even pretty mellow about “Frisco.” The reason is, like many locals I like to refer to San Francisco as “the city,” which I know would cause any New Yorker to burst a blood vessel. In exchange for being tranquilo about people saying “San Fran” and “Frisco,” I also take the liberty of calling Sacramento “Sacto” (though you can hear the quotation marks in my voice).

What would you say is the biggest difference between NorCal and SoCal?

I would have to say that SoCal’s love for the automobile is the biggest difference. Driving is a way of life down there, even with all the gridlock, sprawl, and road rage. Consider a city like Irvine where every street is a six-lane thoroughfare and walking is practically illegal, and compare it to Berkeley, which according to this article has the highest rate in the nation, among cities of 100K or more, of people who bike to work.

Neither. Interstate 5 is referred to as simply “I-5” (no “the”) by every Northern Californian I’ve ever heard. In general, SoCal folks say “the” before a freeway name (e.g, “Get on the 101 and head south), and NorCal folks do not. If that makes me wrong, I don’t wanna be right.

First of all, I couldn’t care less how many leave the state … humans aren’t exactly scarce here. Second, if people wish to “escape” our high taxes, our regulations, and our politics … well, Texas can have ‘em. Consider this declaration, from Mark Duggan, the co-author of a report on this (as quoted here): “Right now market forces are telling California, ‘Get your s—together. This exodus thing—I think it’s a risk.” What a douchebag. Doesn’t he remind you of the blowhard in the bar who invites you to punch him in the stomach as hard as you can? Well I’d like to. Duggan is the director of the Stanford Institute for Economic Policy research, and (like so many Stanford types) he’s obviously a tool.

I think it’s speculative realtors driving much of this hype, such as Marie Bailey, mentioned in the same article, who “cruises around the Dallas suburbs in her bright pink Tesla Model S with the license plate ‘MOVE2TX’” and who “moved four years ago from Orange County to a 2,000-acre housing development in Prosper, Texas, then started running party bus tours for other prospective California transplants.” Bright pink Tesla with a personalized plate? Bus tours? Texas can have her, too, and all her SoCal pals.

I’m certainly not alone in believing rumors of the migration to be greatly exaggerated. According to the results of a survey conducted by UC Berkeley, “Residents are moving out of state, but not at unusual rates.” UCB’s research “draws on many data sources to investigate the so-called exodus: public opinion data, the U.S. Census, consumer credit histories, home ownership rates, venture capital investments, and information from the Franchise Tax Board.” The study also noted that “California’s economy attracts as much venture capital as all other states combined,” so anyone who thinks Austin will be the new tech hub will be sorely mistaken. Oh, and one more thing: Shiner beer is weak.

What are your favorite cuisines that feature in NorCal? Is there any place on earth with better food?

It’s tempting to blather on about how California Cuisine was invented at Chez Panisse, which is walking distance from my house; and how I’ve also had great meals at Tadich Grill (the oldest restaurant in California), the Cliff House (third oldest), Sam’s Grill (fourth), and the Union Hotel (sixth oldest), all in NorCal; but those places aren’t what get me really excited. I think our specialty is the taqueria. I’m in good company here, as the famous food writer Calvin Trilling, writing in The New Yorker, has paid homage as well, calling the San Francisco burrito “so good that at times I've been tempted to put it on my list of favorite dishes that rarely seem to be served outside their place of origin.” This might sound like faint praise, but remember, this is coming from a New Yorker. Even to his daughter, whom he was trying to lure back to New York, he admitted that the food in San Francisco was “O.K. for out of town.”

(Here’s a photo I snapped at Taqueria Cancun, my favorite place in San Francisco.) 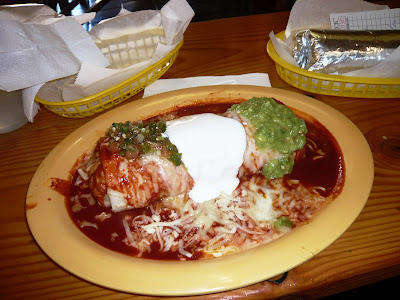 As far as your second question, I am not personally aware of a place with better food, but that doesn’t mean much. I haven’t eaten out in Paris, Italy, Japan, Malaysia, or Vietnam so I’m not exactly a world expert. And I will confess that NorCal falls short in at least two culinary realms: 1) you’ll likely have better fish taco options in SoCal, and 2) you can get definitely get a better bagel in NYC.

You weren’t even born in California. Who are you to field these questions in the first place?

In a way, I think being a transplant almost makes a person more quintessentially Californian. According to the Sacramento Bee, among American-born California residents, only about 64% are natives to the state. Besides, I’ve been here in NorCal for over 31 years … doesn’t that make me more of a Northern Californian than any California native under the age of 31?

I’ll tackle the “liberal” part first: it doesn’t appear to me that NorCal is actually more liberal than SoCal. The following map, from Wikipedia, shows voting behavior as of 2018. The horizontal line is how California is typically divided into north and south—more on this in a moment. (Map created by Kingofthedead; details here. 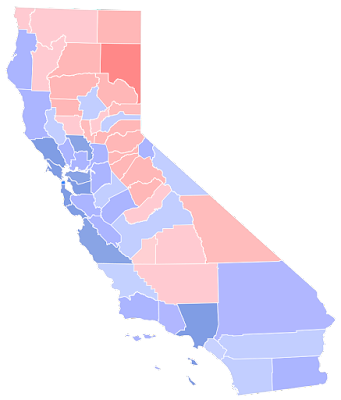 The only red county in SoCal is Kern County, population ~900K, so it’s only about 2% of the state population and thus pretty much irrelevant.

Now, about that NorCal/SoCal dividing line: it’s more historical than geographical. According to Wikipedia, “Pro-slavery politicians initially attempted to permanently divide northern and southern California at 36 degrees, 30 minutes, the line of the Missouri Compromise. But instead, the passing of the Compromise of 1850 enabled California to be admitted to the Union as a free state.”

As for taxation, I can say that Albany, the city where I live, has among the highest sales tax in the country, at 10.75%. The first time I noticed this on a receipt I started to get upset, and then remembered that I’ve voted for pretty much every tax increase I’ve ever seen, including the last sales tax hike. The proposition said something like, “We want to raise the sales tax again because we need to buy some stuff.” I thought about it for a second and decided that seemed perfectly reasonable.

On the other hand, our (at least locally) famous Prop 13 keeps our property tax from going up very fast, which as a homeowner I must admit I enjoy even if it depletes our state coffers. Those who move to Texas are sure going to miss Prop 13 in the coming decades. But, according to this article, “California’s higher income taxes on wealthy earners helps allow the state to generate and spend about 60% more than Texas each year.”

What is the dress code in NorCal?

The dress code here is casual yet chic. Just kidding. (My wife once phoned a pricey restaurant in Washington, DC to ask about the dress code and that was their pompous response.) As far as I can tell, in NorCal you can dress pretty much however you want. I do see more style here than I remember from my SoCal days, but they were brief and long ago.

As I’m no expert on fashion, I did a little research on this and found this handy article in Condé Nast Traveler magazine. The photos in the article confirm what I already suspected: that you can get away with wearing whatever you want here. For example, you could hella wear an outfit like this: 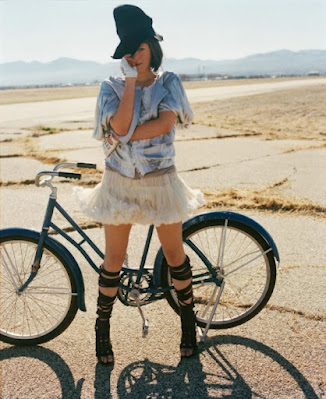 One caveat: it’s not always sunny and warm in the Bay Area, so don’t run around in shorts and a tank top and expect to be comfortable. I learned this the hard way as a kid, when we came here on vacation and I froze my ass off.

I tend to think NorCal people are a bit smug, so tell me: what embarrasses you the most about your region?

Well, I’ll confess I was tempted to bag on Marin County for its long opposition to vaccinating children, but then I figured I better fact-check myself, and you know what? They’ve really come around. As described on the county’s website here, their lowest vaccination rate was 77.9% back in 2011, but they’ve been steadily improving and are now at 94.3%, just below the state average. It helps that California passed a law in 2016 prohibiting personal belief exemptions (PBEs).

As annoying as anti-vaxxers are, though, they’re not nearly as damaging to society, worldwide, as Facebook, based here in the Bay Area. I would be utterly, completely, overwhelmingly relieved and stoked if those heartless, amoral Facebook bastards relocated their headquarters to Texas.