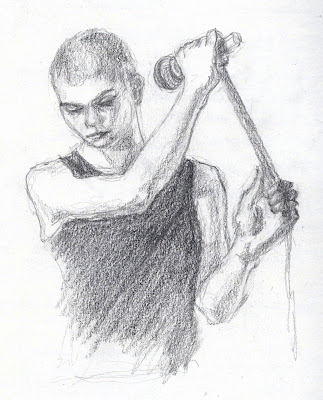 Let’s get down to brass tacks: what is the best Sinead song of all time?

In terms of popularity, “Nothing Compares 2 U” is her highest ranked song on Spotify (almost 218 million listens), which is way higher than #2, “All Apologies” (at 22.7 million). My personal favorite is “Troy” (#3 at 10.6 million), even though (and perhaps partly because) it gets kind of maudlin and overwrought at times. I also like that its lyrics allude to a William Butler Yeats poem.

Of course, it would be silly not to emphasize the brilliance of “Nothing Compares 2 U,” Sinead’s biggest hit. Even though she didn’t write it, it’s totally her song.

Sinead was in the news recently, around some kind of tragedy. Can you fill me in?

Well, albertnet is not a news site, and while there is tragic news—her son died—it seems like that should be a private family thing, and really has nothing to do with her fans. I like her music, and her voice, but I really don’t know her as a person whatsoever and her non-music life has nothing to do with me (nor, I suspect, with you). Perhaps we should all just enjoy her gift to us—that is, the music—and leave the rest of her life out of it. I hope that makes sense.

“Nothing Compares 2 U” is pretty obviously a breakup type song, as she laments her lover moving out. And yet toward the end, she sings, “All the flowers that you planted mama, in the backyard/ All died when you went away.” What’s with the “mama” bit? Someone said this song was really about her mother moving out … is that right?

The “mama” thing is perplexing. It’s tempting to think Sinead added that to the original lyrics, because there is a connection to her mother: when recording the video for the song, she thought about her mother, who had died in a car crash, and this is what caused her to shed tears. But the instance of “mama” is in the original song as written by Prince five years earlier. (As you may know, he wrote the song for this weird offshoot band called The Family, and you can hear their version here, though I don’t recommend it … it’s appallingly bad.)

It does seem as though the song could be written to one’s mother, though. The line “I can see whomever I choose” could be to make a former lover jealous, sure—but it could also be to taunt her mom had she discouraged the singer from this or that poor choice of mate and now isn’t around to complain. Meanwhile, the line “I can eat my dinner in a fancy restaurant” really makes more sense when sung to one’s (presumably frugal) mother; after all, why would a former lover care?

On the other hand, the word “baby” appears twice; calling one’s mom “baby” wouldn’t make a lot of sense. And what seems particularly incompatible with the mother concept are the lines, “I could put my arms around every boy I see/ But they’d only remind me of you.” What boy would remind Sinead of her mother? Probably not the kind she’d want to put her arms around. Suffice to say, the lyrics are ambiguous. Of the song, Sinead said (as reported here), “I think I’m probably similar to millions of people who loved the song, and we’re all people who associated the song with a loss of some kind.” Pretty general, eh?

But wait, there’s more. Prince’s recording engineer is quoted here as saying the song might have been about Prince’s housekeeper, Sandy Scipioni, who “made sure he had his favorite beverage, which was Five Alive, and she made sure the house was clean and that there were fresh flowers on the piano and that the socks and underwear were washed. That might have been the inspiration.” I’m glad there weren’t any lines about the crummy new housekeeper stocking Bubble Up instead of Five Alive and rolling up his socks instead of folding them.

I’ve been reading your column for years, and you’ve never mentioned a single concert, obscure B-side, little known biographical detail, or forgotten track, and as far as I can tell you’ve never even met Sinead O’Connor. What makes you think you deserve to write this column at all?

Sorry to disappoint you. I never said I was some kind of maven or aficionado … just a run-of-the-mill fan. To be honest, I don’t know why I have a column either. I just kind of fell into it. Maybe I should hand you the reins.

Oh, but wait … I did see Sinead in concert once, at the WOMAD (World of Music and Dance) concert in Golden Gate Park, San Francisco in 1993, performing with Peter Gabriel (you can see a terrible bootleg video of it here). So there’s that.

Remember that whole flap about O’Connor ripping up a photo of the pope on “Saturday Night Live”? What do you make of that? Obviously you’re still a fan…

That caused quite the scandal, eh? Even in my (non-Catholic) community everyone was acting like she was some horrible, insensitive person. It’s interesting to point out that, per this article here, there was absolutely no flap over Frank Sinatra’s response, when he commented during a concert not long after, “This must be one stupid broad. I’d kick her ass if she were a guy.” And Joe Pesci said, on “SNL,” that if she’d done that on his show, “I would have gave her such a smack.” Somehow these statements didn’t appear to offend anybody.

As for my reaction at the time, I figured she was just trying to get attention. But this wasn’t a very nuanced position; after all, she was already getting plenty of attention. She was on “SNL,” after all, and had a number-one hit song and album. I didn’t grasp that she was simply using her moment in the limelight to advance a legit social cause, that of exposing sexual abuse of children in the Catholic church. Not that I was alone in being ignorant of this; as reported here, the “SNL” episode was nine years before Pope Jean Paul II acknowledged the abuse. Looking back, O’Connor seemed prescient. Who would excoriate her now?

Madonna, probably. (And you thought that was a rhetorical question!) Like Sinatra, Madonna got all hot and bothered about the “SNL” affair and was very public about it. As described by the New York Times, she complained in the press, “I think there is a better way to present her ideas rather than ripping up an image that means a lot to other people.” The New York Times concluded, “Madonna’s reaction may have been professional jealousy. After Madonna had herself gowned, harnessed, strapped down and fully stripped to promote her album ‘Erotica’ and her book ‘Sex,’ O’Connor stole the spotlight with one photograph of a fully-clothed man.”

(An interesting aside: twenty years later, in 2012, as reported here, Madonna lambasted another rising pop star, calling out M.I.A. for flipping the bird during a Super Bowl halftime show: “It’s such a teenager ... irrelevant thing to do … there was such a feeling of love and unity there what was the point? It was just out of place.” The columnist declared, “It’s no secret that Madonna hasn’t exactly been a great role model over the years. In fact, what M.I.A. did is precisely something Madonna would have done back when she was relevant.” I point all this out simply to highlight the contrast with how well Sinead O’Connor has held up over the years. Does anybody listen to old Madonna songs now? I hope not … they were lame all along.)

I’m sorry, but this isn’t actually a general advice column. I’m really only here to weigh in on the musical artist Sinead O’Connor, so you should check in with Abby or something.

“Nothing Compares 2 U” is hands-down the best song I’ve ever heard about one’s lover moving out. That’s a very intense kind of abandonment, I think. So my question is, can you think of any other great songs on that topic I should be aware of? Bonus points if you can find one from the perspective of a man.

I suppose I should mention “You Were Meant for Me” by Jewel, simply because it’s so popular, with 84.3 million listens on Spotify. And, okay, I confess, from time to time this song is a guilty pleasure for me as well. I especially like the bit about how she gets to make her breakfast exactly as she likes it: “I got my eggs, I got my pancakes too/ I got my maple syrup, everything but you.” (What pop singer uses the word “pancakes,” ever?) And when she gets to the part about “I break the yolks and make a smiley face,” I always think of a McDonald’s commercial for some reason. Suffice to say this song is not nearly as good “Nothing Compares 2 U.” The video, in fact, is totally lame … Jewel is wearing so much face lotion she’s practically dripping, and speaking of drips, the supposedly gone boyfriend keeps popping up, incongruously, like they’re still together, and he is extremely douche-y besides.

If you want a really satisfying my-baby-moved-out song from the male perspective, I highly recommend “2002” by Bob Schneider, from his first studio album, “Lonelyland.” Perhaps he even pays tribute to “Nothing Compares 2 U” because this song starts out in a very similar way: “The year’s 2002/ I do exactly what I wanna do.” He goes on to lament how badly he crashed and burned after his girl moved out. He’s not as specific about the duration (only saying, “It’s been a long, long time since you walked out my door”) but it must be years. All kinds of things have happened: he’s moved cross-country, he’s gotten hooked on heroin, he’s moved to Germany, he’s found a new girlfriend and gotten her pregnant, he’s been arrested … but he keeps coming back to how much he misses this original girlfriend, like he never got over her (which in a way is sadder than being heartbroken after only seven hours and fifteen days). “2002” is not as moving as “Nothing Compares 2 U,” but when Bob Schneider sang it live at the Independent in San Francisco in 2010, I was pretty blown away. (I’d never even heard the song, nor indeed this singer, before.)

It’s pretty obvious this isn’t a real column. Did you just contrive this to bring traffic to your blog, based on Sinead O’Connor being in the news?

In all honesty, I came up with this blog topic about a week before that news hit. I almost considered not writing it at all, since googling “Sinead O’Connor” and getting that sad news is not in my readers’ best interest, in my opinion. I have actually been thinking about “Nothing Compares 2 U” simply because, some months ago, I was casting about for a relatively mellow song to have in my head at bedtime (or more to the point, to replace the raucous one that was already there, because there always is one). For some reason, “Nothing Compares 2 U” really works for this … the rhyme scheme has a nice, calming logic to it, as does the structure, and the song can be slowed waaaaaaay down in your mind. Next time you can’t sleep, give it a try.