From the Archives - Albert Finds Employment

Long before there were blogs, I wrote miscellaneous stuff & photocopied it for friends and family. Here’s an old “press release,” announcing that, five months after moving away from home, I’d finally stopped hemorrhaging my life savings.

Albert, frequently described as “a perpetually unemployed wastoid who’ll probably end up on welfare,” was offered a part-time position at a radio station in town. The station, Class-FM, sought a fast typist to bail out the secretaries and answer the phone. “Well, you know, really what this place needs,” explained Rose, the office manager, “besides of course some extra space (we’re expanding farther into the mall), is … wait, where was I? Oh, yeah, we need someone who can really type, and knows the alphabet. Not that, uh, what’s-her-name doesn’t know the alphabet, ha ha, but we need a real pro, who’s also cool under pressure. Being a radio station receptionist might not sound hard, but did you ever think about those contests? When all the lines light up and you have to take the ninth caller, and then not drop the call when you transfer it to the deejay? Serious stuff.”

Pressed for further comment, Rose went on, “We just need more people, period. We’re strapped. People are going to be taking some time off, including me! I’m going camping for a while. Me and my family, we do a lot of camping. Have you ever been to Big Sur? Beautiful. Yeah, we love camping.”

Albert was thrilled to get the job, which will pay six dollars per hour, but was also vaguely disappointed that it’s only part-time. “Like, you know, dude, I really wanted to pull some major hours, like, you know, up around forty a week, you know, so I could bring down some real big dollars, know what I mean?” Albert said, with his mouth full. That’s why even after getting the offer, he continued looking for work.

He was successful in his search.

Isn’t it annoying how sometimes journalists try to have a major impact by making a single, short sentence be an entire paragraph? Like that little trick hasn’t been done again and again? Like it could still blow away the reader, with the force of one big idea fired off in a single tight little one-sentence paragraph, with all that empty space around it? Like, oh wow, how dramatic! I did it with the very first paragraph of this press release, and then I just did it again. Why do it, if I hate it?

Because if I don’t, my editor will.

On Thursday, Albert’s week-long efforts to secure a second job paid off as he secured more part-time work at a local bike shop, Broad Street Bikes. The owner of the shop, whose last name was unavailable at press time, shares Albert’s first name, Dana. This coincidence had little or nothing to do with Albert’s being hired, stated shop personnel, who disclosed, “We also just hired a guy named Moonie. I kid you not: Moonie.” Broad Street Bikes, like the radio station, will supply Albert with twenty hours per week. “Basically, what we’re looking at is part time, to start,” stated the shop owner. “As the season progresses, we’re gonna need the little fella more and more though, I’ll give ya that.” In the meantime, Albert is confident that between the two jobs he can finally afford to support himself and his family, which consists of three bicycles.

Former Boulderite Geoff Albert was thrilled to learn of Dana’s employment, being both the lad’s brother and his roommate. “Man, you should have been there when I heard the news,” Geoff said. “I laughed, I cried, I ran the gamut of human emotions. There’ll be a lot less whining from the little bastard, and I won’t have to bail him out on the rent anymore.” Geoff, who works part-time at a rival San Luis Obispo bike shop, Spirit Cycle Works, is dismissive of, and yet envious of, his brother’s new bike gig. “You wanna know what Broad Street Bikes was called until just last month? ‘The Moped Emporium.’ No kidding! They serviced mopeds! Bikes were just a side deal! What a joke! On the other hand, Spirit bounces like half of my paychecks, whereas Broad assured Dana that would never happen. Where does he get off, having a reliable employer?!”

Albert’s main reaction to his sudden workplace success was relief. “I was starting to get worried,” he admitted. “That temp gig canning underwear was too weird to last, and then I interviewed as a dishwasher at Sizzler but didn’t get the job! And you know what the manager said to me? ‘Check back next week because this guy we hired, I don’t think he’s gonna work out.’ Imagine! I lost to that guy! I was getting desperate. 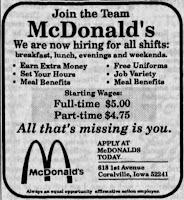 “For a while I thought I might have to succumb to financial pressure and join the [McDonald’s] Team. I guess I can think of worse jobs than Entry Level Fry Guy, but not many. Let’s just say I’m glad I can afford to feed myself now.”

Quite a statement, considering that an average Albert eats over half his body weight in pasta or related foods daily.