0oooo
Introduction
oooo
Are you serious? Part Four of a series and you still need an introduction? Well, in the spirit of mixing things up, maybe I’ll do a Hollywood-style preview instead:


From a land that time forgot … four intrepid explorers take on a vision quest that will change their lives forever … a legend, and a secret, so powerful it defies explanation … and it just may be the universe that hangs in the balance. From the creator of “Mud Bath” and “Wrecking the Car” comes a new post from albertnet … London Part Four … Gamma Force.
oooo

ooo
The simple word “garden” can be oddly misleading. I think of a garden where you grow vegetables, or at least fail to grow vegetables. Meanwhile, the term has taken on new significance with my kids, because right before this vacation we went to , an amusement park. But to the British, “garden” basically means backyard. In the context of a huge tourist attraction you have to pay to get into, I assumed “garden” meant these big, lavish, manicured things like Filoli in Woodside, California. Of course, not knowing exactly what to expect is half the point of these outings.
The first thing I’ll tell you about is that it’s fricking huge, despite being in . Only a monarchy could establish such a massive community garden in a city with such expensive real estate. The second thing I’ll tell you is that it’s teeming with creatures I can only describe as daytime werewolves, that strike all the time, totally regardless of moon phases. You don’t have to look hard to see one ripping a pigeon totally apart, and if you’re lucky you’ll see one dismembering a live, struggling, shrieking Ewok. There, now I’ve got your attention! Look, I’ll be honest, even the coolest garden—with miles and miles of lawn and absolutely massive trees of every sort imaginable—doesn’t make for good reading so I’ll try to be brief here, and cheat when I have to. We’ll breeze through this quickly and I’ll try to get you out a little early. 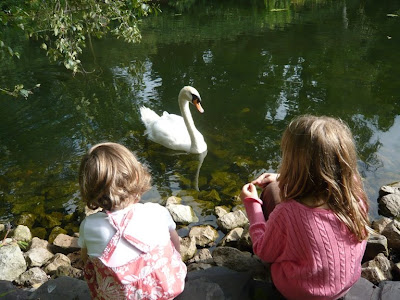 An English fellow we'd been chatting with warned us that the swan might nip the kids. He went on to mention that all the swans in are the property of the crown. He sounded kind of proud of this. It actually wasn’t news to me: one of the things we’d hoped to see on our trip was the annual ritual of Swan Upping. This is where the river Thames is blocked off and a team of very proper Englishmen dress up in very proper uniforms, go out in little matching boats, gather up the swans, count them, measure them, weigh them, and file a proper report, properly. According to my own non-fact-checked intuition, the authority to conduct Swan Upping may be one of the last, or at least one of the most prominent, remaining vestiges of power the crown has left, other than custody of the ravens at the (see http://www.albertnet.us/2009/08/london-part-two.html).

The trees at are amazing—hundreds of years old and just massive. Here, the chilluns take a break on an accommodating branch. 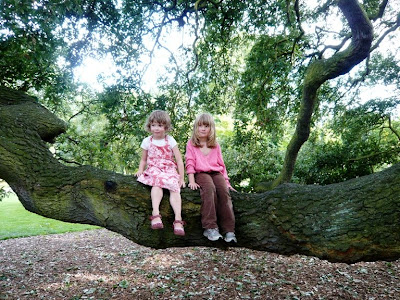 Needless to say I couldn’t get this tree into a single frame: 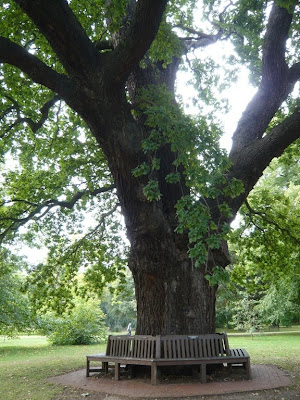 Size does matter, but it’s not all that matters. Here’s a smallish tree that is just basically groovy—enough so that it transported Lindsay into a magical realm wherein I can actually take a candid snapshot of her smiling. (The name of this tree is the “Magnolia ‘Star Wars.’” My earlier Ewok joke notwithstanding, I promise I’m not making this up.) 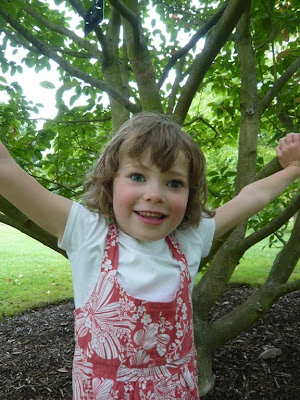 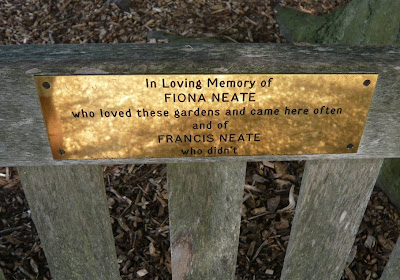 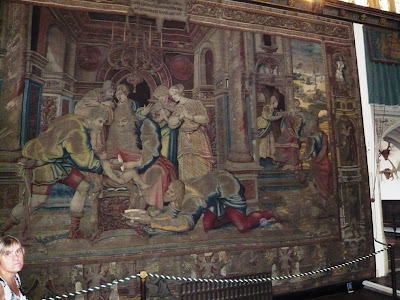 Also of note is the woman in the foreground staring into the camera. She went to some trouble to be in the photo. Naturally, I wanted to get the whole tapestry in my photo, but repointed the camera to remove her face, only to have her creep back into the frame, seemingly with complete deliberation.

My kids didn’t gush about , but I’m sure it made a strong impression. At one point Lindsay said, "Fa-fa, I have to whisper something in your ear.” She went on to whisper, “Do you like me more than you like Henry VIII?” I whispered back, “Yes, certainly!” and she got all smiley.

A highlight of our visit was the opportunity to have our photo taken with Henry VIII himself (and his brother-in-law William). Henry was resplendently attired because a) he’s a king, and b) it was his wedding day (well, his sixth). The astute reader will have realized by now that this couldn’t possibly be the real Henry VIII, who died in 1547. Lindsay also recognized this, and had no enthusiasm for posing with the imposter. Knowing our opportunity was fleeting, I grasped at straws to get Lindsay to participate, and committed this misstep: “I know it’s not really Henry VIII. It’s his ghost!” Boy, that didn't help. I finally had to resort to bribing her with three Smarties (which are basically English M&Ms). 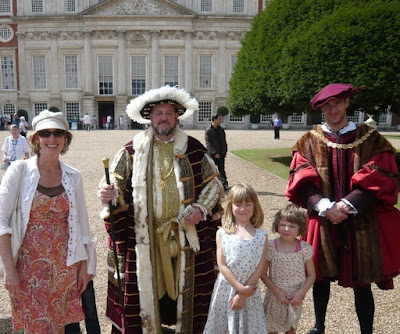 I thought this photo-op was pretty cool. I’ve been to twice and both times I was roundly snubbed by every oversized Disney character I came across. Finally, I’m getting some damn respect.

To some degree, this was a literary pilgrimage for Erin and me; we’d both read (if not enjoyed) “The Wife of Bath’s Tale” in Chaucer’s Tales. Meanwhile, Jane Austen lived in for awhile, and though she is said not to have actually liked the place much, a couple of her novels (about over-civilized high society types) take place there.
made its name as a spa town, probably a bit like Calistoga except for people who are really, really loaded. The baths were originally built by the Romans, and then the Saxons used it, and then the English. It’s about a hundred miles west of , which meant a long train ride.

Long journeys of any kind can be intimidating to parents, because when the kids melt down there’s no escape for anyone. A Greyhound trip with kids would be a Room 101. But this trip went really well. The train was spacious, fast, smooth, and quiet. Here we are speeding along, watching the lush scenery go by as we have a little picnic.
We got to about an hour before the daily walking tour given free by volunteers, organized through the mayor’s office. It was the first completely sunny weather we’d had in the , and really hot. We needed something cold to drink, but first wanted to pop into a Top Shop for just a couple of minutes. None of us knew what a Top Shop was, but said something about Kate Moss and wanting to see what all the fuss was about. For me, the question was answered when I saw this shoe. 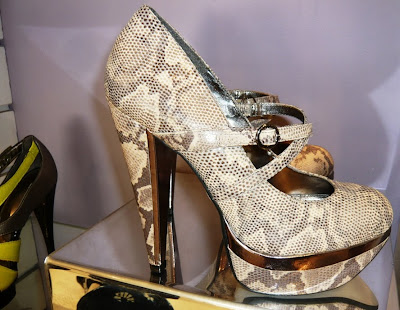 Alas, I didn't even have a chance to try it on before was ready to go. One of the great things about is that when she says, “I just want to pop in here for like two minutes,” she really will be ready to go in two minutes or less. And when she says two seconds, she returns in exactly two seconds. It’s almost eerie.

It’s a good thing we had the guided tour, or we’d have missed some of the coolest sights in . For example, we came over a little rise and I suddenly saw all these people sunbathing on this huge lawn, and a second later I saw this giant crescent-shaped building overlooking it:

A walking tour in the heat, especially one with a lot of history and such, isn’t how most five- to seven-year-olds would prefer to spend their day, but Alexa and Lindsay did really well, sitting down on the ground every time the guide stopped to talk, Lindsay getting out her little activity bag and Alexa her book: 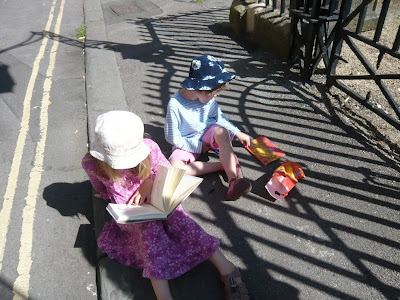 Still, they required some attention from time to time, which often kept me from hearing the lecture. So I’ve done my best with this next bit, which concerns a very cool building forming a complete circle around a park. 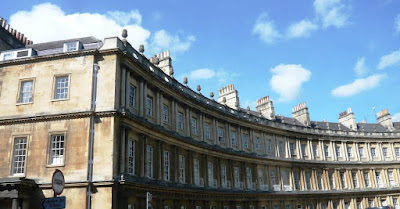 Some king, or maybe just a real estate developer, back in some ancient time, had some awful skin disorder. What’s worse, his pigs caught it from him (hearing this, was I delirious?), and when he was banished so as not to infect anybody else, he led these pigs to an area right on this very spot. Back then this was a boggy, muddy place, and the pigs wallowed in the mud, and he couldn’t get them to continue their march to—where? I didn’t catch that part. Anyway, he had to coax the pigs out with acorns, and when he cleaned them up (I know—a king? cleaning up pigs?) he noticed their skin was healed.

So, he tried wallowing around in the mud himself, and sure enough, he was cured too, and so he decided there was something salubrious about this area, and built something here, and either he or somebody else generations later commemorated the whole episode with these giant acorns that adorn the building. 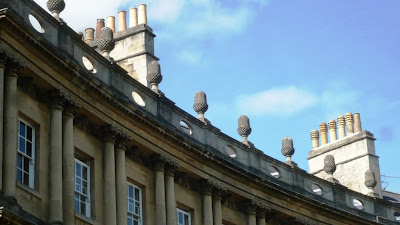 But then there’s this other theory is that some king, him or someone else, just really liked oak trees, hence the acorns. Was tour guide wacky on the junk? Or am I just suffering the cumulative effects of trying to follow too many lectures from tour guides? I suppose I could ask if she’d gotten more of this story straight, but on second thought I find I prefer it in its unpolished form.

Towards the end of the tour, our guide singled out Alexa and said, “Now here's part of the tour just for you. This will be the part you remember! Do you like ‘Wallace & Gromit’? Well, this house right here was the home of the man who invented Plasticine. And do you know what Wallace & Gromit are made of? Plasticine!” I wish I could say Alexa's eyes lit up and she asked all kinds of questions, but she didn't. She was hot and tired and bored, and of course a bit shy. (But she and Lindsay still got the ice cream we promised on the condition that they behave exquisitely throughout the tour.)

Well, that’s it for today. I’m on a plane now, heading back to the land of very large stoves and fridges. Thanks for tuning in.
Posted by Dana Albert at 4:09 PM