“Study these rules, and imitate the British. There can be only one result: if you don’t succeed in imitating them you become ridiculous; if you do, you become even more ridiculous.”
--George Mikes, How To Be an Alien, 1946

My family is vacationing in London. Here's a brief post about our fraught trip out here. It started with a phone battle with Bangalore, because Air Canada had screwed up and we had no e-tickets for our first leg to Canada. Then we took Bart to the airport:

From SFO we flew to Edmonton, where we had to pick up our bags from the baggage check and take them through customs, even though only we’d only be spending half an hour in Canada changing planes. We managed to be at very end of the customs line, behind every other passenger from the first leg of our flight. At the customs desk we had a long discussion about the apples in our luggage. The clerk had to go consult with her manager about the apples, and they finally let us through on the condition that we eat the apples on the plane and threw the cores away in England.

We got to the next baggage check perilously close to boarding time and were told that the flight was closed. We threw ourselves on the mercy of the attendant, explaining that we’d hurried straight over from our other flight. She seemed to take pity on us, and managed to check us in (though we had to go behind her desk and load our bags onto the conveyer belt ourselves). She escorted us to the security check to shepherd us through if necessary; when we reached the gate the boarding was already underway. We just barely made it on. Here is Alexa posing in the fancy new first class cabin (where we did not get to sit). 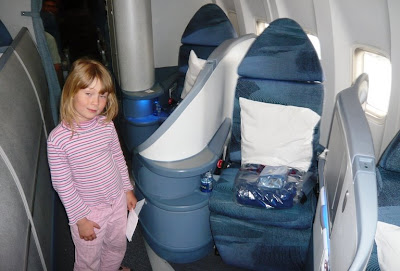 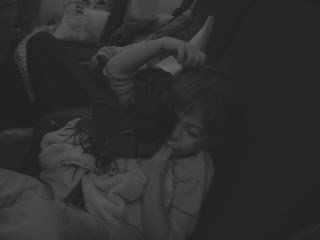 Unlike when she last flew to Europe a few months shy of second birthday, Alexa was pretty well behaved: instead of screaming the whole time, she wept quietly about her inability to sleep. I had a hard time with this myself—only Lindsay seemed able to sleep—and when we finally touched down at Heathrow we were all in a spot of bother. Alexa in particular was being frightfully stroppy, berating me for her inability to find one of her shoes.

Long after most other passengers had alighted we were still messing about with our so-called “personal items.” Our seating area was right shambolic, and between sorting out our gear, stuffing it in our hand-luggage (which seemed to have shrunk en route), and just generally cocking about, we got some flack from the head flight attendant. He was a right tetchy blighter, rudely hassling us to hurry up. Lindsay thanked him for her dinner, saying how delicious it was, but the shirty plonker paid no attention, just chivvied us on as though his job was on the line.

In the queue at customs we had to fill out all these bleeding declaration forms that I knew no living human besides myself would ever set eyes on. No, we couldn’t just have one form for the whole family, but one form each, with places for birth date, passport number, passport expiration date, local address in London, etc., etc. and they didn’t even give us a blinking Biro to fill them out with. And we still had the apples that we’d neglected to eat during the flight, which now presented a dilemma: if we didn’t eat them on the spot, we couldn’t go through the “nothing to declare” queue, and who knows how long the other queue might be? But at the same time, the apples had become rather manky en route, all dented and bruised, and after all the nosh we’d been served the on the plane (e.g., muffins the size of a human head) we weren’t even the slightest bit peckish.

On a happier note, the Albert sprogs were intrigued at the exit by giant glass bowls where people got rid of their non-English money (presumably it goes to some charity). A wide variety of coins and currency littered the bottom of the bowls, and reminded me that we needed to address the little matter of dosh before venturing past the airport into the actual city. I figured there would be a cashpoint at the underground, and that they’d take credit cards anyway, but I also wanted to play it safe. So I went to a American Express currency exchange desk.

I suspected Amex would be dodgy with the exchange rate, but what I actually encountered was nothing short of daylight robbery. For my twenty American dollars, the clerk offered a little less than nine pounds. She told me the amount tentatively, as if trying not to laugh or smirk. I felt pretty gutted about it, but what was I to do? It didn’t help that I’d removed from my wallet all the cards I wouldn’t need in England (e.g., business travel corporate card, Safeway club card, library card) so my wallet feels sadly thin and depleted. My recommendation to you is that if you go on holiday in a scandalously expensive land, keep all those cards in your wallet, and maybe a bunch of receipts as well, just to pad it out a bit.

Now there was the matter of taking public transportation from an airport I’d only been to once to a house we’d never been to, in a neighborhood we’d never been to, in a city we’d never been to. I certainly wasn’t expecting this to be a doddle; indeed, the mere prospect of this task had been giving me the collywobbles for some time, and now, facing the reality of it, I was having kittens. We made our way to the underground and I headed to the ticket machine to add value to the Oyster cards our house-swap friends had given us. As I’d feared, the poxy machine was designed by a bloody pillock and in my dumb American attempt to suss out a standard purchase I was completely bricking it. You have to know what zone you’re traveling to, and from what zone, and there’s no map, and with a long queue forming behind me I ultimately cocked things up completely and ended up with no ticket, just a receipt, and no real understanding of whether I was out any money.

While the queue thinned out I looked at a map, took a deep breath, and bashed on. Right away some impatient bloke appeared behind me, decided I was obviously a bit dozy, stepped forward, and showed me his version of the ropes. He always buys this all-day all-zone pass for seven and a half pounds. This seemed like overkill to me; I knew we’d go straight to the house and collapse, not venturing forth on the underground for the rest of the day. So I told him to sod off. (No, of course I did nothing of the kind. First off, he was trying to be helpful, and second, I wasn’t quite comfortable with my English language abilities, despite having a degree in English.)

Meanwhile, Erin was coming unglued and my weans, in addition to stooping to the most godawful whinging, were coming as close to hand-to-hand combat as I’ve ever seen them. (Actual fisticuffs have yet to occur to my bairns; I guess it’s because they’re female.) Alexa eventually managed to bump her head pretty hard on another Oyster machine (suffering literally what I was suffering figuratively) and began bawling piteously. Blimey! Though I felt on the verge of losing my bottle, I know bold action was required, so I went back to the machine a third time. Guessing wildly, pressed the “multiple tickets” button. It asked what the first ticket should be for. I selected an all-day pass for zones 2-6. It told me to deposit £5.50.

But what about the second ticket? Shouldn’t I select everything, and then make one payment at the end? That didn’t seem to be an option. I put in my Visa card and got one ticket. A “receipt” button appeared on the screen for a fraction of a second, but my reflexes weren’t good enough and it vanished. At least it spat out a ticket. Then it asked me what the second ticket should be. I put in for another all-day zone 2-6 pass. It asked for another £5.50, and when I put my card in again it said I couldn’t use that card anymore today. I had to use another one. What bloody eejit designed this thing? It’s a good job I had a second card to use, and if I needed a third ticket I’d have been totally scuppered. (We didn’t need tickets for the girls; kids traveling with their parents on public transportation are free throughout London, which we’re pretty chuffed about.)

We figured out that the underground line we needed was the Piccadilly. This struck me as extremely over-the-top, so obviously English, like what Disneyland would use to get the point across that a ride had an English theme (just as the Russian character on the original “Star Trek” was named Chekhov, and the Italian in “T.J. Hooker” was named Romano). What really got me, though, was the name of the ultimate destination on this line: Cockfosters. Could any English-speaking teenager hear this word without giggling? What’s more, the female recorded voice announcing the train’s destination at each stop pronounced it in a way I can only say was suggestive. And her English accent brought to my (dumb American) mind the narrator of the Foster’s beer commercial (male and not English, I know) saying, “Fosters … Australian for beer.” Except I kept expecting the recorded voice to say “Fosters … British for cock.”

The underground took us to within blocks of the house we’re staying at, and the walk itself wasn’t so bad (other than all the luggage we had to hump). We got to the house and I made up a couple of sarnies with what I was able to find in the fridge. The rest of the afternoon we spent dossing around instead of exploring London, because of our jet lag. I sat up in bed with my PC burning in my lap and busied myself brushing up on British vocabulary at http://septicscompanion.com/showletter.php?letter=all. Again and again I fell asleep, and each time my head swung back and knocked loudly and somewhat painfully into the headboard, waking me back up. Erin napped downstairs while the sprogs played with all the cool new (to them) toys in the house.

Eventually Alexa asked me to read to her from Roald Dahl’s Matilda, and though it was a right blinding book I started nodding off straightaway. This almost always happens when I read to the kids, and the normal rule is that they’re required to let me sleep. Alexa was in a tetchy mood, though, and every time I nodded off she gave my face a push, almost a slap, really, and said “Wake up!” I was too bleary-eyed to discipline her, and anyroad she ended up falling asleep herself, so we all wasted an afternoon sleeping (just to make sure we’d be wide awake at 4 a.m.). Finally at around 15:00 we roused ourselves and headed to a brilliant nearby pub, The Plough Inn, where we tucked into a scrummy meal. Look at these fish & chips! (Not shown: my soggy kecks, which Lindsay spilled my pint on.) 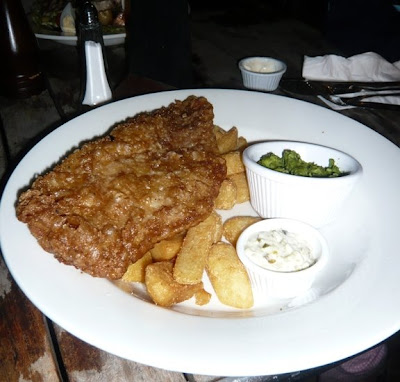 Perhaps I’ll have more to tell over the next couple of weeks, provided this poxy laptop doesn’t catch fire or melt down. Cheers!
Posted by Dana Albert at 3:22 AM