NOTE: This post is rated R for mild strong language, mild scenarios of violence, and intimations of possible drug use.

What follows is a work of fiction. All the normal disclaimers apply. Any resemblance of any character to any actual human, living or dead, is purely coincidental.

I’m hanging out poolside with Dr. Bacon. I would rather be hanging out poolside with a friend, but none of my friends have pools. (I do have a friend who’s a doctor, but he seems in no hurry to start making stacks of money so he can have a pool and invite me over.) Dr. Bacon is asking questions about my health, and I don’t have much to say. I’m thinking, “Why am I here?” He looks like he’s thinking, “Why are you here?” But he always looks like that, even when I’m in his office. He must think all patients are hypochondriacs, and probably not without reason. A neighborhood dad I know complained of not being taken seriously. “You have Dr. Bacon too?” he said. “That fucking asshole, he never prescribes me anything!” I’ve learned, though, that if you can manage to convince Dr. Bacon that you’re actually sick or your back is actually out, he’ll give you gobs of free samples—he’s the king of free samples. He once gave me so many free samples he had to give me a white paper bag to haul them all home in.

It’s not really hot enough in this town for a pool. Today is pretty nice, though. The sun is out and there’s a slight haze in the air that reminds me of SoCal, where the fog doesn’t burn off until noon. Dr. Bacon, pale and old, is wearing swim trunks approximately the color of urine. My own trunks are this orangey peachy color that, I now reflect, wouldn’t look good on anyone. Not that I’d look the part in any swim trunks anyway—I’m not exactly model material and my upper body, which never sees the sun, is as white as uncooked chicken. It’s almost impossible to be embarrassed in front of a doctor, of course; this guy once gave me a rectal exam. Still, his questions make me a bit uncomfortable because I really cannot recall how I came to be here, and there’s nothing wrong with my health. I don’t say much, but the doctor gamely continues the interview, as if to honor my having arranged the appointment, and to pay lip service to my notion (right or wrong) that there is something wrong with me.

“You look tired,” he says. I yawn. I’m semi-reclining on a deck chair, which is made of cheap plastic webbing that sags a bit. This patio and pool wouldn’t be written up in “Architectural Digest” or “Sunset.” It’s all nice enough, but a bit tired. Half the pea-gravel has gone away over time but the pool is clean. I tell Dr. Bacon it’s hard to get enough sleep. “How often do you exercise?” he asks. Shouldn’t that be in my file? Or is he testing me somehow? “Every other day,” I reply, feeling sheepish because of course I sound like I’m lying, though really it’s true. I’m just as embarrassed as if I were lying.

Suddenly, the fence crashes in and an old beat-up van bursts on the scene. It’s ancient and boxy, with a flat windshield. It goes right into the pool, like sometimes happens in a dumb comedy where you, the viewer, have to wonder if the movie producer isn’t just flaunting the fact that he’s got the budget to put a car in a pool, even though it must be a hassle to fish it out, with a crane or something, and surely the pool needs to be drained afterward, and how funny is it, really? A spectacle, to be sure, but is it really funny? 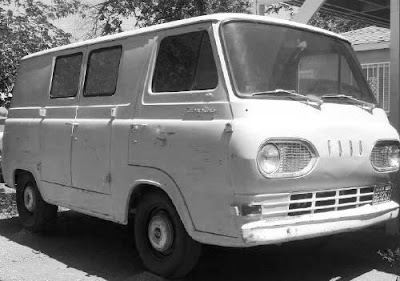 This isn’t a dumb comedy, of course, this is real life and it’s not funny at all. My first thought is, is somebody going to drown? It’s taking surprisingly long for the van to sink, but once underwater it’ll be really hard to open the doors, won’t it? The cabin will fill with water and the driver and any passengers will drown, a miserable panicked claustrophobic death. I yell, “Get out! Get out of the van!” The driver looks unconcerned. Can panic look like that? I keep yelling. Finally, lazily, the driver rolls down his window, cranes his neck to get a look at me, finally seems to understand what I’m saying, and gets his door open. He climbs out of the van, followed by another guy, and then the van sinks to the bottom of the pool.

They must be on drugs, both of them. Somebody’s got to call 911. I go thru the sliding glass door into Dr. Bacon’s house, and pick up the phone. It’s a wall-mounted Trimline phone, but a really old one with a rotary dial. It’s really grody. Actually, I’m just assuming it’s grody based on its age. But why am I bothering to notice this? I’m dialing 911! It’s an emergency! But before I can dial, I hear the 911 operator answer. Bacon has picked up another extension and has already placed the call. 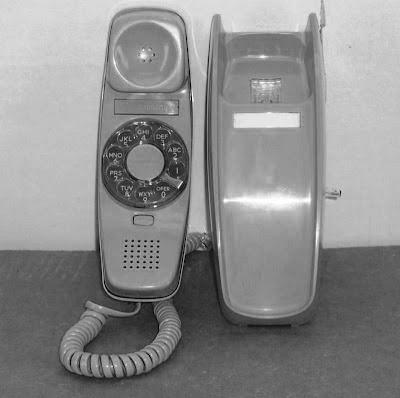 Why are we calling? Because we assume these guys are hurt, or to bust them? Not my problem, at this point. I put the phone back in its cradle and head back out to the pool. Large puddles are forming beneath the guys as they ponder their van and its predicament. Bacon comes back out. The driver, the larger of the two men, says, “Can somebody get me a doctor?” Bacon says, “I already dialed 911.” Something about his tone—smug? menacing?—suggests to me that it’s the police, not an ambulance, that’s on its way.

What he should have said is, “I am a doctor. How can I help you?” Then he could stall the guys until the police arrive. But now the guys are looking a bit frantic and will probably escape. But would that be such a bad thing? What good will it do to punish them by force of law, if they don’t already have some sense that they’ve done something wrong? With a van like that, they probably don’t have insurance or any other means of compensating the doctor for the hassle of fishing this van out of his pool. The van itself probably has a bluebook value of, like, nothing. The doctor will have to absorb the cost regardless, and will this be any easier for him to shrug off just because the driver got probation or jail time?

Still, the law must be served. I’m not going to let this get away like that time in when a guy pulled on gun on my friends and me. I somehow didn’t see the gun (granted, it was dark), and I got not only the make of the car wrong but the color and even the basic type. I was a useless witness. When my girlfriend ran into the house to call 911, she couldn’t find the phone right away because it was some novelty phone, a Mickey Mouse or something, and by the time the cop arrived, the gunman had robbed a liquor store nearby. (Question: would you call him a gunman even if he didn’t actually shoot anybody?)

This time I’ll have to do better. So I trail behind the departing guys and say, “Wait, stop!” I want to get a good look at them so I can tell the cops what they look like. They turn around. The driver is short, stocky, dark, and has black hair. He has a thick neck. He’s wearing a t-shirt that says “Pirates vs. Ninjas.” The other guy, to my surprise, looks like a surfer, a golden boy. Suntanned, tall, muscular, shirtless, with long blond hair. My earlier memory was that the two guys looked pretty similar. What is wrong with me, that I’m such a poor observer? Is this related to how bad I am with names?

The driver evidently doesn’t like the way I’m staring at him, and he comes and gives me a shove. I recoil, not so much from the shove but from the somehow shocking cold wetness of his hand. Of course his hand is wet, the guy is soaked, but I react just as I do when one of my kids, finishing a meal, wipes her jam-covered hands on my shirt as though I were just a giant napkin. Then I grasp the import of the shove and realize I’m about to get in a fight.

Instantly I’m flooded with adrenaline and if I were to look closely at my hands, which have become fists, I’m sure they’d be shaking. I can feel blood coursing through my body and my stomach gets all fluttery, like I’ve had ten cups of coffee. I half expect my nose to start spontaneously bleeding, like it did in the last fight I got in, under the flagpole at school (I guess I’d been punched in the nose, but I never felt like I had, nor did my fist seem to connect with the other kid’s nose, but it was bleeding too). I adopt a boxer’s stance. This registers on the guy’s face—just a flicker of alarm, and then he puts up his fists, too.

Perhaps his lizard brain is telling him, nonverbally, “Your opponent is tall. His arms are long. Your chances are not good.” I hope he’s thinking that. I hope this guys isn’t a trained fighter who has mastery over the instinctive fear response. I don’t want a fight, whatever the odds, because of course I’ll get hurt and it won’t make any difference if I hurt him as well. So I decide to negotiate—without, of course, lowering my fists.

“I have a longer reach than you,” I tell him. “And I’ve been in plenty of fights.” I suddenly realize how ridiculous this sounds. It could be worse—I could have thrown in something about having grown up with older brothers, which would have sounded even cornier. Something like amused disgust flits over his face—or is it just my sheepish imagination? “What, you think I’ve never been in a fight before?” he asks, starting to bounce just slightly on his feet, bobbing and weaving just a bit—his best impersonation of a prize fighter. Or am I imagining this motion, poor witness that I am?

“Yeah, I’m sure you’ll do fine, but we’ll both get fucked up,” I tell him. “Who wants that? What good would it do? Wouldn’t you rather have a hug?” My own strange utterance amazes even me, but instantly the guy looks relieved, and just like that we’re hugging, exactly like boxers do when they’re exhausted and, ridiculously, collapse into each other’s arms right there in the ring in front of hundreds of spectators, until the bastard referee pulls them apart and makes them fight some more. But there’s no referee here, so our hug is unbroken, the guy’s drenched shirt gradually soaking my own, and I silently congratulate myself on my quick thinking. The sound of sirens approaches. Help is on the way, and everything is going to be fine.