From the Archives - Nevada Road Tour

How old does something have to be before it can be called “archival”? I broke my own albertnet record in April by posting something I’d written less than a year before. And now, because I’ve run out of handy archival pieces, I’ll break new ground with a tale that’s only two months old. I wrote this for my bike club pals.

Why should you read this? Because it’s short, it’s funny (I think), and it’s full of suffering and disappointment: a story of a bike ride gone wrong. Not spectacularly wrong, but just basically and essentially wrong. I met up with a couple of cycling pals near Lake Tahoe to do a Saturday bike ride before watching, with our families, the first stage of the Tour of California bike race. (That endeavor went about as well as the ride, which is to say not well at all.)

The tale begins, of course, with dinner the night before. On the way up to Tahoe our family dined at a rather good taqueria called Talavera. It’s on Yes, you read that correctly: this was the little taqueria less than half a mile from home. We got such a late start, we ended up setting a new record for how soon into a road trip we stopped for food. I had a carnitas burrito with cheese and guac. It was big and, well, tasty enough. (The quality control isn’t the greatest at Talavera. If you’re there when the cook is on, or the right cook is there, it’s SF-Mission-worthy.) My daughter Alexa had the mushroom quesadilla which was really the star of the show. Happily, the mandatory Parental Tariff policy stood me in good stead.

The morning of the ride, at 6 a.m., I had a PBJ (Alvarado bread with Adams organic peanut butter, the salted kind of course—not like the heinous Deaf Smith unsalted brand I grew up with, which came in like a 5-gallon drum and was so runny we called it Quicksand because you’d lose knives in it, every time you got to the bottom of the drum there would be like six of them and it was practically inedible due to no salt—and my mom’s homemade apricot jam, which is nirvana).

It was pretty chilly at 7 a.m. when Craig, Ed, and I started our ride, and the spray from riding through several large puddles got my leg warmers wet. We tooled clockwise around the lake and then headed into and took a left on Highway 431 at . This highway took us up over Mount Rose, the summit of which—at almost 9,000 feet—is the highest pass in the Sierras (and higher than the Col du Galibier in , though you shouldn’t for a moment think that even deserves to lick the Galibier’s foothills). My form was, as we in the suffering industry say, “El Crappo Grande” (perhaps in part because I’d given two units of red blood cells a couple weeks before). It’s always a little sad when you’ve planned an epic ride and discover your legs are no good.

We spent just long enough at the summit for Ed—who had arrived before us and thus had been waiting around in the cold wind for awhile—to take our photo. It was 41 degrees up there but not raining. I know Craig and I look fat in this photo, but it's just the wind filling out our jackets. Honest. 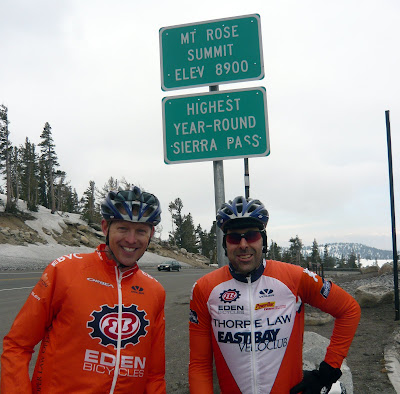 Toward the bottom of the descent, following Craig’s detailed directions, we turned right on Joy Lake Drive, which was supposed to connect us to … well, I never actually got to find out how it was supposed to connect up, because at the gate to a, well, gated community we encountered a stubborn security guard who wouldn’t let us through. He had a walrus moustache and a walrus physique and immediately made me think of the Pink Floyd line, “It’s too late to lose the weight you used to need to throw around.” He gave an impassioned speech about the filthy rich people living in the McMansion compound, and how they were so tired of the thousands of cyclists streaming through their community, burning their homes to the ground, enslaving their wives and children, and littering, that they closed the gates and won’t let any more cyclists through. The guard gave us directions to a trail we could use instead. These instructions showed the guard to be either dyslexic, stupid, right/left colorblind, or maliciously unhelpful. I am confident that his body will never be found.

So we had to backtrack, up the No Joy road we’d come down, and then continue on to Highway 395, where we headed south into a brutal headwind. We stopped at a gas station where Craig studied a map. Useless as ever, I hung out outside and tried to learn something from this distinguished fellow. 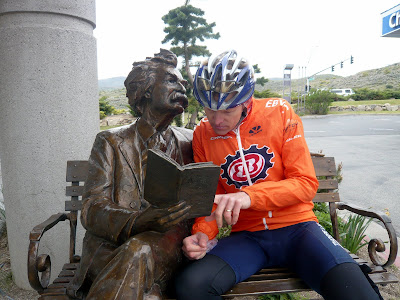 We took a ninety degree turn which should have ended the headwind, but it seemed to alter its own course and continued blasting in our faces. Of course, to make up for the detour and not keep our families waiting we felt the urge to ride faster. My strength by this point had decayed from hopeless to lugubrious and it was all I could do to suck Craig’s wheel, shamelessly and parasitically.

It was criminal how little work I did breaking the wind for the others, but that’s okay because Craig has been training a lot and seemed to be punching through the wind just fine. We got into and Craig had a general idea there was some really cool bike route to take, but we couldn’t find it, and then we saw this cyclist. “Which way do we go?” Craig asked him. The guy responded, “Where are you going?” If there’s a such thing as the polar opposite of a tautology, this was it—a notion I pondered for the next hour or so.

So we ended up riding right through the main drag in , and a drag it was. The wind was ripping the flesh off our faces. As we passed a used car dealership with all its balloons, straining against their strings in the wind, I wondered if there were a convenient way to end my own life. Falling off Craig’s wheel would have probably done the job, but not swiftly nor mercifully. I’d have died hating doing something I loved, which just seemed wrong, so I chose life. Life without parole, it seemed like. We stopped at a mini mart for water and some guy said, “You guys heading over 50? You got a long haul there.” We acknowledged that indeed we were totally screwed (though we used a more polite term). As he headed through the door he said, “Have fun in the race tomorrow.” As if.

So we headed west on Highway 50 over Spooner Pass, which those familiar with Spoonerisms might call Pooner Spass, thinking they’re funny or clever or something. It started off pretty badly because the wind still seemed to be in our faces, but then it shifted and we had a tailwind. Wow, what a relief. It didn’t help so much, but it left me free to drop off both Ed’s and Craig’s wheels without dire consequences. I’d have liked the company, of course, but at least I didn’t have to hear this squeaky chain that one of the bikes had, which was almost loud enough to drown out my wheezing. At one point I had to turn around because I accidently littered. Eventually I reached the top. Don’t we all? 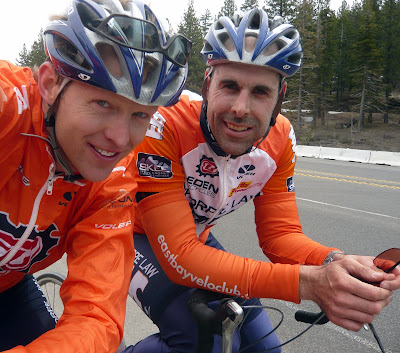 There’s not much else to say except the ride went on and on. I started to feel okay by the end, probably only because I know I was almost done. I was barely coherent. When I tried to talk, often I would say the same word twice, like a strange form of stuttering. Craig pointed out that on this bike path were painted instructions saying “Ride on this side, Walk on this side” which he felt was a very poor idea as it would lead to head-on collisions if heeded. At first I didn’t even know what he was talking about—I thought he was warning against slime in the puddles—but when I finally heard him right I thought his point was that the instructions were backwards, that you should ride on that side and walk on that side, and only after several minutes did I finally grasp the lunacy he was pointing out. Dang. Anyhow, at 117 miles, with 8,400 feet of climbing, this was my hardest ride of the year. 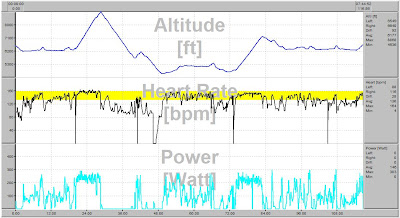 During the ride I consumed four large bottles of energy drink, two energy bars, and four doughnut holes. The doughnut holes I bought on a whim at 7-Eleven at our last stop. By definition doughnut holes have zero calories but I bought them anyway because they looked kind of tasty in a grotesque guilty-pleasure—nay, shameful-pleasure—kind of way. Ed looked hungry and also sick so I can’t tell if it was in the spirit of helpfulness or schadenfreude that I offered him some of the doughnut holes. He declined. I saved a couple for my daughters. Oh, and I had a 20-ounce Coke.

Dinner was the gastronomic equivalent of a ten-minute hip-hop mash-up where every single rapper on the planet jumps in to freestyle on the mic. While the men were out riding, the womenfolk had spent the day cooking. (This probably sounds sexist, and it’s an exaggeration, but after the beating I took on the road I need to take steps to rebuild my masculine dignity.) There was spinach lasagne, two kinds of enchiladas, salad (though I didn’t eat any), fruit salad (ibid.), a big ham, and some other stuff I think.

Then there were individual pumpkin pies with whipped cream, two kinds of ice cream, those cookies with big chocolate disks pressed into them, and the mandatory parental tariffs I took of my kids Hostess fruit pies from earlier. I just sat there for like two hours straight eating plate after plate. (My wife Erin has pointed out that if I weren’t so thin this kind of eating would be a truly disgusting spectacle.) As if Craig hadn’t done enough work on the ride, he did the dishes while I just sat there. I’d like to take this opportunity to thank him for organizing the weekend and doing all the work.

The next morning, it was snowing. The snow fell hard and steadily and the Tour of California race was first postponed, then eventually canceled. More than a foot accumulated, and I-80 was closed. We did some sledding. 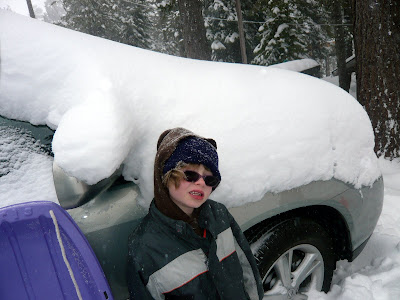 Eventually CalTrans reopened the highway, but required tire chains. This was May, remember. By the time we got on the road the chain control was lifted, and we made our way uneventfully home. It had been a great weekend, actually.