Cyclists are a weird breed. On the one hand, we really know how to suffer (at least the non-poseurs among us) and much of our sport consists of slogging away brainlessly on some climb—so you’d think the expression “strong like bull, smart like tractor” would apply to us. On the other hand, there’s a tremendous technical aspect to the sport: heart rate, nutrition, power output, pacing, and then all the myriad bike-related concerns like materials, aerodynamics, frame geometry, and gearing—which suggest we’re all nerds. So: are we brutes or nerds? Ultimately we’re both.

It may not be obvious to the non-cyclist, and particularly to the non-male non-cyclist, that something arcane like bike gearing can say something fundamental about the manhood of the rider. Well, it can and does. Whether a male cyclist is a nerdy gear-head type or not, he is required to be aware of the statement he makes (like it or not) with his gearing choice. In a previous post, I wrote about how the rear cluster of cogs on a bike factor into the manliness equation; here, I’ll discuss the front end: the crankset and its chainrings. 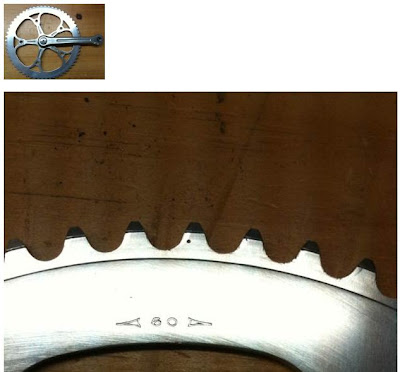 Some years ago, when chatting with my wife, I became aware that not everybody understands the link between bicycle gearing and manhood. Here’s a brief background. A high gear helps you go fast on flats or downhills. A low gear gets you up the hills. Your choice of gearing determines how fast you can go (the high end) and how steep a hill you can climb (the low end). The larger the front chainring, the higher the gear. The larger the rear cog, the lower the gear. All of this can be precisely calculated mathematically, but there’s an aesthetic component too: a giant front chainring is macho, and a large rear cog is embarrassing. I’m aware that some males are so secure in themselves, or so ignorant, that they don’t even notice such things. I pity those males.

Perhaps you think this link between gearing and machismo is my own personal hang-up. Well, it’s not. Members of my bike club recently got into a protracted e-mail discussion about whether to use a “compact crankset,” which is a relatively new offering from the industry. The discussion stemmed from a link somebody forwarded around to a blog explaining (with very nerdy language and graphs) why a compact (which has a 50-tooth outer chainring and a 36-tooth inner chainring, aka 50x36) is superior to the more standard 53x39 setup. While the benefit of the compact is clear, there are downsides, with the manliness factor chiefly among them.

One of my teammates wrote, “When riding my compact people would regularly spot my weedy [50x36 compact] gearing then deliberately bump into me in the coffee shop, spilling my drink, spit on me, or worse, and then laugh at me when I declined their offer of a fight. With my current 53x39, on my other bike, no one messes with me for fear of the total ass-kicking my manly gearing implies in spite of my weedy build.”

Another rider, one of the best climbers among us, who finished a stellar fourth place in the Everest Challenge stage race, wrote, “Alas, at my ripe old age and being an Everest enthusiast I did make the switch to a compact last year and like it. The only downside that I’ve experienced is that it does tend to shrink your genitals.” Another guy chimed in, “I just glanced over at my bike and feel like very unmanly ... yes, I race with a compact. I, in fact, have a brand new Dura-Ace 53x39 sitting in a box, waiting for me to turn into a man.”

Back in the ‘70s and early ‘80s, any kid getting into bike racing was all but required to learn about gearing, because there were limits as to how high a gear he or she was allowed to use. (The idea was to produce “higher overall cadences and lower overall stress per pedal stroke.”) After every race, the top finishers had to report to the “roll-out” area, where a referee would put the bike in the highest gear, and measure out how far it rolled in one pedal revolution. If the bike rolled too far, the racer was disqualified. The “intermediate” age group (age 14-15) could use up to an 85-inch gear (gear inches being the rollout distance divided by pi). This restriction equated to a 53-tooth chainring with a 17-tooth small cog (i.e., 53x17), or a 44-tooth chainring with a 14-tooth small cog. The older “junior” age group (age 16-17) could do a 95-inch gear (53x15 or 45x13).

Other than juniors, though, nobody thought too much about chainring size. Road bikes only ever had two chainrings. The inner ring almost always had 42 teeth (though cheaper Japanese bikes often had 40), and the large ring almost always had 52. (Juniors seeking an edge could use a 53 and still pass the roll-out.) Tourists, who were generally referred to as “fat tourists,” had triple-chainring cranksets, but no other road riders used them. (When mountain bikes came along they always had triples, for various legit reasons.)

As road cycling became more mainstream, however, a problem developed: gearing standards were being developed for racers, but a new breed of wealthy enthusiasts was unable to make it over climbs with racer-like gearing. Thus was born the 39-tooth inner chainring. My friends and brothers and I went right out and bought them, because going from a 42 to a 39 up front meant we could use smaller cogs in back, which gave us a tighter range of gear ratios (and looked cooler, which was probably the main point). When I raced in college I seldom used a rear cog larger than a 19, and boy did I feel cool. Meanwhile, an enthusiast could use a 39 up front and a 24 in back and still do okay.

As ever weaker and wealthier enthusiasts joined the sport in the ‘90s, the triple crankset—with a tiny third chainring for climbing hills—became common even on non-touring bikes. I was shocked when Shimano introduced a triple version of their top-end Dura-Ace crankset. This was a bit like if came out with a non-spicy version for kids.

I can’t stand the look of a triple crankset. To me, it’s the equivalent of white socks with khakis and loafers. There’s just so much stuff there, and moreover the rear derailleur needs to have a longer cage. Above all, it makes your racing bike look like a touring bike. There’s nothing wrong with a touring bike—if you’re touring. (That said, my wife and I used mountain bikes for our big bike tour.) A triple on a racing bike that’s supposed to be sleek and fast—I just can’t handle it.

Thus, when the compact came out—both rings just three teeth smaller than standard—I was glad. It’s a nice compromise and enables a racer-type to handle the steep hills without his bike looking ugly. Since its introduction, I’ve seen the number of triples dwindle among angry bikers, and I’m grateful.

So if the compact crank is such an elegant way to give low gearing to a bike, why does it cause so much angst to male racer-types? One answer would be that we shouldn’t need it—after all, we raced for years with 39s. But the Bay Area, especially the where I live, is full of brutally steep climbs. My standard 90-minute ride includes over 3,000 feet of climbing in just over 20 miles. My favorite climb averages an 11% grade for two miles. I’m not as strong as I used to be. Do I fantasize about putting a compact on my bike? I do.

But if I did that, I’d have to live with myself. When a man heads toward middle age and resorts to lower gearing, something inside of him just dies. Meanwhile, a compact crank costs about $600. That’s if you buy Dura-Ace, anyway, and I’m not about to step down to the inferior Ultegra crank just because I’m not man enough to push the gears I used to. Spending money to get around human weakness is arguably one of the greatest problems facing mankind and I refuse to participate if I can possibly help it.

Paradoxically, the aesthetic presentability of the compact ends up being a problem of its own. The stigma of a larger cog in the back (which also achieves a lower gear) is a lot more obvious to the observer, so to run a compact instead is like trying to fool everybody. The compact doesn’t scream “wanker,” but a riding buddy noticing your higher cadence on a steep climb is likely to figure out you’ve got one. The trained eye will have no problem discovering it.

Recently I reunited with an old friend I hadn’t ridden with in over twenty years. He’s a big strapping guy, a former Marine, and of course we were both curious to see how the other has held up over the years. Still an athlete? Check. Willing to tackle gnarly climbs? Check. Cool bike? Check. But then he turned a discerning eye to my drivetrain. “You’re not running a compact, are you?” he asked, dismay lurking in his voice. I was so relieved to be able to say, “Of course not!”

As a consequence of my stubbornness in a) riding a standard crankset, and b) wanting to ride the big hills, I’ve had to resort to using a rather unpleasantly large cog in the back: a 27. After spending my whole childhood working my way from an embarrassing 32-tooth large cog to ever-smaller ones (a 12-17 was my coolest rear cogset), I’m spending my adulthood going the other direction. Until I bought a 12-27 cassette a couple years ago, I hadn’t resorted to gearing that low since I was a pre-teen! (In that light, the junior gear restriction can seem pretty silly.)

I do take some heart from the pros, who aren’t above using the larger rear cogs, or at least considering it. I came across a quote about the Dutch rider Laurens Ten Dam (who won the brutal La Marmotte road race in the French Alps the first year I rode it):

oooo“Ten Dam said his success today [in the Mt. Baldy stage of the Tour of California] came in part because he asked his Twitter followers which gear to use on the stage today - a rear cassette with a maximum 25 tooth cog or one with a 28? The answer came from his former teammate Rory Sutherland, who said, ‘If you don’t use a 25, then you’re a “watje” (wuss).’

I’d be self-delusional if I thought I was a really studly guy. Not only do I not have much hair on my chest, I have very little chest to have hair on in the first place. Plus, I don’t have cool razor stubble like dark-haired dudes. And, I drive a station wagon. But at least in this one tiny realm—compact vs. standard crank—I can hold my head up high.

As for that 27-tooth rear cog, at least I’m not trying to pass myself off as a strong man. I have low gearing, yes—but I own up to it. And every so often, I swap out my rear cogset to a good old 12-25, just to cheer myself up.