What is Earth Hour?

If you don’t know what Earth Hour is, then you’ve missed it for this year.  It ended a little bit ago.  But read on, so you’ll know what to do next year.

If you already know what Earth Hour is, read on anyway, because I’ll share my favorite tidbits, show a highlights reel of the website, take on some Earth Hour haters, and show you my own Earth Hour video, taken less than an hour ago.

So:  what is it?  Earth Hour is an annual event that lasts one hour—or, rather, one hour per time zone.  At 8:30 p.m. local time, you turn off all your lights.  It’s as simple as that.  If everybody participated, the world would go pretty dark (other than streetlights and such, of course).  The idea is to raise awareness about energy conservation.  Here’s a photo from last year:

As you can see, it’s not a hugely dramatic effect.  Frankly, I find the above photo a bit sad—imagine how much darker that skyline could stand to get.  Even though I live in the Berkeley area, which I think of as the Prius Belt, almost nobody I’ve asked about Earth Hour has even heard of it.  My participation this year felt a bit Quixotic.  But if enough people tilted at enough windmills, some nice momentum could build.  So here I am, doing my part to spread the word.

You can get all kinds of details, of course, at the official website.  They have all the usual links to history, happenings, and such, along with a “fun stuff” section for kids.  (If your kids aren’t too jaded by games like Grand Theft Auto – Innocent Bystander Senseless Execution Edition, perhaps they’ll get a kick out of the Virtual Lightswitch, Virtual Lantern, Lights Out Game, and Pocoyo’s Recycling Game.)

The first thing you’re likely to see, though, is a little video of Miranda Kerr, the Earth Hour ambassador, promoting the “I Will If You Will” challenge: 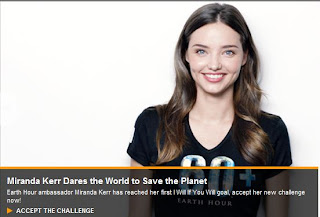 “I Will If You Will” is a charming way for people to engage with Earth Hour.  People put up videos of themselves describing what little stunt they’ll do if enough people reciprocate with Earth-friendly behaviors.  Ms. Kerr, for example, offered to “challenge the whole KORA Organics team to offset their carbon emissions for all flights for 2012 if 500 people agree to do the same.”  But any Joe can propose any kind of deal, and some of them are delightfully wacky.  Click here to check them out.

The quota is met by people pledging, with a mouse-click, right there on the site.  Another participant promised, “I will play the piano live on the web for 8 hours nonstop if 5,000 people start recycling.”  Two firemen standing before a skyscraper declared, “We’ll climb this entire building, 96 stories, wearing all our gear” (“or shirtless!” the other threw in), “if 5,000 people take public transit for 1 week.” 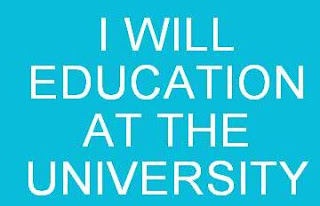 I hope the guy who made that promise understands that universities have an admissions process.

Another pledge that gave me pause was from a woman who declared, “If 10,000 people commit to recycling, I’ll propose to my boyfriend.”  I sure hope she consulted with him first so he’s not caught off-guard.  And what if 10,000 people don’t accept her offer?  Is she then free to propose anyway, or is the marriage off?

My favorite was a guy promising, “If 5,000 sign up for Earth Hour, I’ll cut my hair like this guy” [here he held up the photo you see below], “all beautiful and shiny like the day he was born, except for the sides and the back.”  (This challenge is titled “I’ll shave my head ‘male pattern baldness’ style.”)

Even though this year’s Earth Hour is over, you should check out the event’s YouTube site, because lots of participants will have uploaded their Earth Hour videos to it.

I didn’t have to look very hard to find people who are opposed to Earth Hour.  In thirty seconds on Google (I consider Wikipedia cheating), I found two articles arguing against it.  I will now dismember both arguments, just for sport.

I’ll start with the weaker of the two essays.  It’s by a fellow named Keith Lockitch, writing in the Ayn Rand Center for Individual Rights.  Dr. Lockitch writes, “This blindness to the vital importance of energy is precisely what Earth Hour exploits,” and that “what we really need is greater awareness of just how indispensable carbon-based energy is to human life (including, of course, to our ability to cope with any changes in the climate).”

Um, excuse me, but doesn’t an appreciation for the benefit of carbon fuels mean conserving them so they don’t run out?  And who isn’t aware of the benefits of electricity?  How should society address this supposed lack of awareness?  Should we have a Carbon Energy Hour once a year?  I can imagine the slogans.  “Reading at night?  Try a lamp!”  “Wet hair?  Dry it fast, with electricity!”  The “I Will If You Will” challenges would be extra fun.  “If 1,000 people let their car engines run all night, I’ll run my blender continuously on ‘frappé’ until all the oil in the motor burns up and it seizes, and then I’ll go buy another one!”

And exactly how are we supposed to use carbon-based energy to cope with climate change?  Put all the carbon emissions in a rocket and fire it into space?  Dr. Lockitch’s position is idiotic, and the fact of his Ph.D. should be an embarrassment to the institution of higher education.

The other anti-Earth-Day view I encountered is from Maggie Koerth-Baker, writing in the Huffington Post.  She is far more levelheaded and articulate than Dr. Lockitch, but I must still take issue with her assertions:

“This event perpetuates myths about environmentalism and gives people the wrong idea about what it will actually take to solve our energy problems....  In fact, in places where lots of people participate, there might even be a small, temporary uptick in emissions. When fossil fuel power plants are forced to rapidly increase or decrease the amount of electricity they produce, they also produce more emissions....  Some people see Earth Hour … and come away thinking that all they have to do is shut off some lights sometimes, and everything will be fixed....  The solutions to our energy problems don’t start with individuals shutting the lights off at home.  They start with public policy—the only force that can actually change how the infrastructure and shared systems work.”

I agree that public policy is really important, but I also highly doubt that many Earth Hour participants would so totally miss the point of the event.  The website makes it very clear that Earth Hour is simply a way to raise awareness about energy conservation and foster a public dialog.  (Ms. Koerth-Baker is a beneficiary of this dialog; she gets a nice hook to hang her policy observations on.)  Government energy policy will never change until the public demonstrates that it cares, and Earth Hour is an easy way to make a visible show of support.  What is Ms. Koerth-Baker’s alternative to Earth Hour:  to organize a worldwide Energy Infrastructure Policy Hour, where once a year everybody stops what they’re doing, heads to a government office, and spends an hour engaging meaningfully with the political machinery that regulates energy use?

Meanwhile, Ms. Koerthbaker’s article contradicts itself.  On the one hand, she asserts that individuals shutting off lights at home doesn’t materially impact energy use, but on the other hand she says Earth Hour might cause an uptick in emissions as the lights come back on.  Well, which is it?  Given how few people participate in Earth Hour, while all that electricity-drawing infrastructure continues to run, how could this event affect the power grid?  And if it did, wouldn’t that suggest that individual behavior really does have an impact?  Ms. Koerthbaker has some valid points, but she strikes me as one of those over-critical scolds who manage to teeter between idealism and cynicism.

To me, one of the most important opportunities for Earth Hour is to get kids thinking about energy use.  Earth Hour ties in nicely with my constant harangues to my own kids about turning off the light when you leave a room.  It should help them recognize that lots of people care about conservation—that this concern isn’t just another strange idiosyncrasy of their father’s.

So I took some effort to make this event meaningful and fun for my daughters.  We discussed what climate change is, and why “global warming” is a problematic term for it.  I described how grizzly bears are venturing ever further north and are now mating with polar bears.  We talked about the actual meaning of Earth Hour, just in case my kids had thought the event would fix everything all by itself.  (They hadn’t.)  They actually got pretty excited and were looking forward to having all the lights out.

To officially mark the beginning of Earth Hour we made this video, with my older daughter working the camera:

As you can see, I didn’t want anybody to have a lapse and flick on a light during the hour, so I left nothing to chance and cut power to the entire house.  Once the hour began, we agreed not to use any portable electronic devices, since recharging batteries later would simply shift, not eliminate, our Earth Hour electricity use.  I did use one flashlight, but it’s powered by a magnet sliding through a copper coil as you flip it back and forth.  I was sorely tempted to use an MP3 player, because  at dinner at a neighborhood restaurant they’d been playing Foreigner's insanely catchy “Waiting For a Girl Like You” and I badly needed a song graft.  But I managed to hold out.

The kids will long remember Earth Hour, I think.  They were stoked to make the movie, and enjoyed the candlelight.  (In a grudging nod to the Ayn Rand set, I pointed out to my daughters that going without electricity wouldn't be so fun if it lasted a month.)  I read to my younger daughter from The Mysterious Benedict Society, and then it was the kids’ bedtime.  I looked around the neighborhood:  plenty of lights still on.  Earth Hour is still a small movement.  At 9:30, I flipped the power back on and reset some clocks.

After Earth Hour was over, I was inspired to my check out my utility company’s website to see what kind of statistics they can provide.  To my surprise, they do provide the ability to track usage by day (though of course today’s usage won’t be posted until tomorrow). 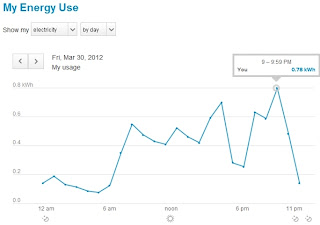 Were it not for Earth Day, I probably would not have remembered my energy company’s Smart Metering announcement and would not have discovered how precisely I can monitor my electricity (and gas) usage.  And without a public interest in such analytics, the power company likely wouldn’t provide them.  See?  This is exactly the kind of awareness that events like Earth Hour can produce.

So, are you in for next year?
dana albert blog