NOTE:  This post is rated R for a single instance of mild strong language that I couldn’t bring myself to omit.

What follows is a work of fiction.  The normal disclaimers apply.  Even the language used, though it bears a strong resemblance to American English, is made-up and used fictitiously.  And yet, if you read this through to the end, you may decide there is an important kernel of Truth within. 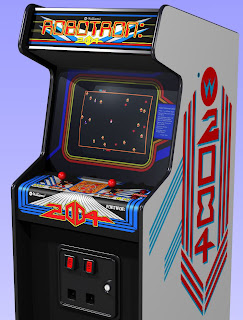 Okay, I’ve been spending a lot of time playing this video game but I think I’m done now.  It was just so nostalgic when I spotted the game in the little pizza place near the office I sometimes go to for lunch.  It’s almost exactly like the Robotron: 2084 console I used to play on in the pool hall on Pardall in Isla Vista, during my college days.  Surely you remember this game, though in your head you probably hear “Robo-tron” while I always called it “Robot-Ron.”  But this console, in the pizzeria, is a subtly different version called Robotron: 2084’ (which I assume is pronounced “2084-prime”).

Physically it’s the same:  same small color screen, same utterly basic graphics, same two knobs (one to move in any direction, one to fire in any direction).  At first, even the gameplay is almost identical:  everything coming at your guy like a damn frenzy, certain enemies you can’t kill, and of course the humans you have to save.  At first the main thing you notice with 2084’ is that the sound is better, like there’s a subwoofer in the cabinet.  But then you discover that your gun seems to overheat or need a reload or something, so you have to be a little more economical with your shots.  Hold the knob down for too long and it stops firing for a second or two.  This limitation increases as the game goes on.  And when you get into the higher levels, or waves, you get some different enemies to kill (which I’ll get to).  But mostly, it’s the same as ever.  I have no use for modern ultra-graphic first-person shooter games—once you get past the initial dazzle, they’re all the same boring crap—and don’t even get me started on Internet gaming.

So I have found Robotron: 2084’ oddly addictive, as much as when I was in college and we all spent more time in study breaks (aka, playing Robotron) than studying.  I’ve found myself eating at the pizzeria more and more often, and playing the game longer and longer afterward.  It’s become routine to still be at it when the nearby high schoolers get out of school.  At first they seemed annoyed to find me here.  But I’m fricking good at this game, having probably spent more years playing it than this console has even been here, so they all hang around to watch after the first kid has put his quarter on the sill to claim the next game.  (The beauty of this console is it still only requires a quarter.  Maybe they couldn’t retrofit it.)

I have to confess, the chatter of the kids is part of the enjoyment.  I feel like one of those really old dudes at that one park in Chinatown who play Go or poker on the stone tables, their pals gathered around bobbing and prattling away.  Now and then I catch my reflection in the console screen, and—shadowy as it is—my thin face and receding hairline make it pretty obvious I’m kind of old for video games.  Sometimes these high schoolers ask me questions, but I don’t answer.  For one thing I’m concentrating too hard, and for another I’m kind of afraid of becoming like The Guru.

The Guru was this guy who used to play Gauntlet in the student center at the university in Boulder where I played video games as a teen.  This guy was way too old to be a college kid, and in fact looked (and often smelled) pretty close to homeless.  He had this scraggly beard and everything, and he was phenomenal at Gauntlet.  Maybe playing it had become, for him, the cheapest way to be indoors out of the cold.  He could go forever and kept up a constant monologue of advice and strategy.  My friend Bob, who loved Gauntlet, hung on the guy’s every word, but I think we all sort of pitied him.  I mean, a forty-something who’s that good at a video game?  Get a life!

Not that I should talk, canceling meetings and conference calls and even sometimes calling my wife to say I’m working late, all just to play Robotron: 2084’.  Yes, I fully understand how lame that is.  But there’s just this one new enemy I couldn’t figure out how to kill, and felt for weeks like I was on the brink of a breakthrough—there was just something familiar about this enemy, and if I could figure out how to kill it I could finally clear this wave and see what the next one is like.  That’s all I want, I’ve been telling myself—to clear this one wave.

The new enemy looks like a sidewinder snake.  It moves like lightning, and once it heads for you there’s nothing to do but flee.  Sure, the game has always had the Hulks that you can’t kill, but they’re pretty slow.  The Sidewinders are fast and ruthless, and when you get to the wave that has them, it doesn’t matter how many lives you have left.  You’re toast within minutes.

And yet, they seem vulnerable; when you manage to shoot them, they change color for just a second, and there’s this low sound, a throb you can feel through the knobs.  This is the part that seemed familiar somehow, even though it’s nothing like the original Robotron: 2084.  It was a code I had to crack!  I wish I could start each game where I left off, because getting to this wave takes a good while, and then I have precious little time to work out the riddle.  For this last minute or so the high school kids are no longer jabbering.  They just gasp.

And finally, I hit upon the answer.  The Sidewinders are a bit like the Pulsars in Tempest, my other favorite 1980s video game.  In Tempest you’re moving your claw-like shooter along the rim of a geometrically shaped hole, shooting beasts that come up from below, and at a certain level you get the Pulsars that, with their rhythmic pulses, electrify the whole segment they’re on.  Touch that segment and you’re dead.

To defeat the Pulsars you have to get into their rhythm, so you can pop over and shoot them between pulses.  That was a major breakthrough in playing Tempest, and killing these Sidewinders turns out to be similar:  it’s all about rhythm!  When they are stretched out straight, shooting them does nothing.  But in the Z-shaped phase of their slithering, you can shoot them and you get that color thing and the throb sound.  What I’ve discovered is, it takes three hits to kill them—but if you’re shooting continuously, your gun overheats and you can’t take the third shot.  But if you pop them—a quick stab of the knob, perfectly in sync with the throb of their slither—they die after three hits!  As soon as I discover this, I’m slaughtering them like lambs and my teenage spectators are going nuts.

They have no idea how I’m doing it, you see.  They probably never played Tempest.  (Maybe this is how the creators of Robotron: 2084’, who I picture as ageing nerd-hipsters with pure white ponytails who are happy to have one more retro-programming gig, show their respect for veteran gamers of their generation.)  As I perfect the sidewinder-killing technique I get closer and closer to that long-awaited next wave, and then suddenly:  I’m there.

The next level, though, is astonishing.  I’m braced for the most insane onslaught of all, but instead the screen is practically empty.  No Electrodes, no Grunts, no Hulks, no Sidewinders.  There are a few humans wandering around.  I head over to them to pick up some points, but my guy is moving more slowly now, and as I approach a human she seems repelled and just scoots away.  (She could have been turned evil, except there’s no sign of any Brains, or “Brain-fuckers” as we always called them.)  I keep waiting for the enemy attack but doesn’t come.  I risk flicking my eyes over to check out my score, and my jaw drops:  I’ve got the high-score!  I’ve finally outscored JOC!  (I assume that it’s just a coincidence that the initials at the top of the Robotron: 2084’ scoreboard are the same as those of my old junior high buddy Joaquin … surely he hasn’t moved West like me, and taken up Robotron again?)

All that’s on the screen besides humans are these little flowers in vases.  I try to shoot one, but I have no gun!  Just these little hands I can waggle with that knob.  I go over to try to pick up a vase but just knock it over.  I try again.  I pick it up and walk with it, then it falls from my hands.   “Dude, your score drops every time you break a vase!” one of the teenagers says.  I look up.  It’s true, and what’s more, my score is gradually dropping all the time.  Soon it’s back below JOC’s high-score.  And the game isn’t fun anymore.  There’s nothing to do!

Eventually it dawns on me what this wave must be called:  retirement.

That would explain my guy’s sluggish speed, and why his gun got taken away (“He might hurt himself!”).  The other humans, far from looking to him as their savior, no longer want anything to do with him.  And the teenagers watching me are starting to get restless.  They’re just waiting for me to die.  My score falls and falls.  I’m no longer relevant.  Eventually the manager of the pizzeria comes over.  “Uh, sir?  Apparently you’ve kind of had your turn at this game?  These other customers are asking if I can pull the plug to reset it for them?”

I turn and leave, and head back to the office.  Thank God it’s just a game.
Posted by Dana Albert at 9:39 PM