NOTE:  This post is rater R for mild strong language.

Let me start by saying you should work for the Zagat guide, because your little snippets of quotation would fit right in.

I suppose I could wonder why your road tire smackdown is between these two, since there are countless other good tires out there.  But since they’re both popular tires, I’ll continue.  It’s tempting to believe that the conflicting reviews are a simple matter of cognitive dissonance:  people will praise whatever they shelled out money for.  But actually, I think comparisons in ride quality will always favor the most recent tire purchased.  Why?  Because almost nobody replaces tires until they’re worn out, and a new tire will always give a nicer ride than a worn-out one.  I recently bought some Vredestein TriComps, and though they felt slightly better than my Conti 4Ks, I realized I hadn’t had such a welcome feeling of increased luxury since I originally installed the 4Ks, which replaced—guess what?—a worn-out but otherwise identical pair of 4Ks.

Longevity is hard to measure.  It has to do with road quality, season, and rider weight (which, particularly in my case, isn’t even a constant).  On an objective note, the Contis have a handy wear indicator, which is very useful. 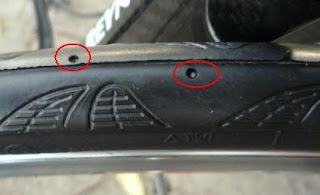 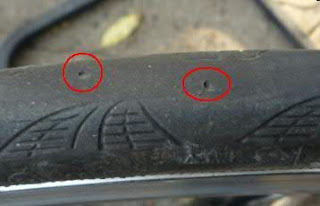 Still another objective decision point is country of origin.  The Contis are made in Germany, the Vreddies in Thailand.  As an expression of appreciation for the all-together-now Global Village, I like to make my bike as international as possible.  My bike has components from Spain, Japan, France, Italy, Romania, Taiwan, China, and Thailand; I had Germany represented until I got these Vreddies.  (My inner tubes are Thai, which heritage is now redundant.)  Alas, my bike is completely un-American.

One more thing.  If your bike has really short chainstays and clearance is an issue, be aware that the 4K is a very high-profile tire.  The TriComp offers better clearance.

Say you’re on a ride and something slices your tire.  BLAM—major blowout, and though you have a spare tube, it’ll balloon out of the gash in the tire, and explode, as soon as you bring it up to pressure.  How do you get home?  Well, ideally your tool kit includes a small section of sidewall cut from an old tire.  You put this between the tube and tire, right where the gash is, and it protects the tube so you can get home.  Note, in the following photo, how you can see the light-colored boot peeking out from behind the gash; note also the slight bulge in the sidewall from it. 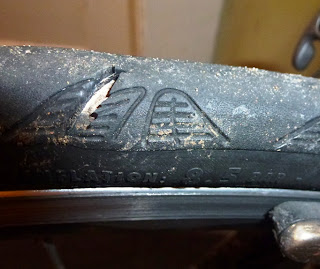 But what if you don’t have a proper boot?  Well, that’s where you improvise.  I’ve used paper money and even a nice green leaf as a boot.  I solicited my bike club to find out what other creative solutions have been employed; the list includes Powerbar wrappers, duct tape, mylar, semi-rigid plastic product packaging, and gel wrappers (“I think that that little bit of sticky excess gel which leaks out can be a benefit in this scenario, keeping the boot positioned while you install and pump up the tube”).

My friend Craig told me, “I’ve only used a Washington a few times, and in deference to our first president, I always have him face inward, you know, in case you run over dog shit or something.  I wish I could write about a MacGyver moment where I wove the fibers of a young bamboo plant into a cloth, tapped a rubber tree with a bic pen and vulcanized the rubber using heat generated by rotating my wheel while applying my brake, but (a) I’ve never biked in a Southeast Asian rainforest, and (b) I’m not that smart.”

Another inspired boot tale was from my friend Dave, a former US Marine:

Mountain bike night ride.  Descending some wooded single-track that for legal reasons I can’t name.  One of the riders has a sidewall blowout/tear, probably three or four inches long.  When it blew I thought we were coming under sniper fire....  What do we do?  Lights all focused on the tear ... anyone have a water bottle? check ... a knife? check ... cut the top and bottom off the bottle, slice the water bottle down the side, and wrap the bottle boot around the tube in the location of the tear/blowout.  Worked like a champ!  This might even work for a serious road tire blowout ... but what road rider actually carries a knife ... they all should, dang it ... it’s war out there.

I’d like to think it was a big badass buck knife.  This would be easy enough to find out, but I’d rather assume wrong that find it out was a basic Swiss army knife or something.

What, in your opinion, is the best bike tire of all time?

That’s a tough one.  The Continental Top Touring 26x1.95 is an amazing tire for longevity; I put over 5,000 miles on a pair while touring, on a bike so laden it weighed between 150 and 180 pounds, and the tires weren’t even half-gone by the end.  But the Top Tourings were heavy, slow tires and not in the least romantic.

My all-time favorites list also includes the Clément Criterium Seta Extra, because it had a silk casing and of course the specialness that “Extra” implies.  I never actually rode them but I just enjoyed basking in their cultural perfume.  For pure racing satisfaction I loved the Egyptian cotton Vittoria CX/CG combo, and would have belligerently defended their top-rank reputation had anybody ever challenged it, which nobody ever did.  It would be tough to narrow it down and give the “best ever” reward to either of them, though, because you had to run the CX on the front and the CG on the rear.  I never questioned this—it was just wisdom handed down through the ages.  I loved those tires like a woman.

And yet, when it really comes down to it, my favorite tire of all time was actually this bad boy:

It’s the Wolber Champion de France (you can still buy them, here).  I never actually rode them, because they were absolutely the most unreliable, wretched tires on the face of the Earth.  This was in 1986, when I was racing as a junior in Boulder, Colorado, and our local 7-Eleven junior team was sponsored by Wolber.  In every single race at least one of the Slurpees would puncture.  Since every rider on that team seemed to be their star rider, a puncture would throw their team tactics into chaos, giving the rest of us a slightly better chance in the race.  So it was thrilling and gratifying every time one of those guys—faster, stronger, better equipped, better-coached, and in most cases better-looking than us—got a flat.  You might say these tires provided a more level playing field.  (Not in the BS Lance Armstrong sense, since doping doesn’t level the playing field, because it confers a greater advantage on a) those who have a naturally lower hematocrit and thus more to gain from EPO, and b) those who have the money and savvy to dope more effectively, which makes the race all about doping instead of all about prowess, tenacity, skill, intelligence, and all the other great things about real cycling.  But I digress.)

You don’t mind if I call you Trudy, do you?  Anyway, I think I can spot a loaded question.  You probably think I spell it “tyre” to be more Euro, or perhaps as a shout-out to my British readers.  But actually, it’s simply because that’s my name.  This isn’t a fake advice column, my surname really is Tyre, and I really do have a doctorate (a Ph.D. in Socioeconomic Geology of Subterranean Puddles, which has more to do with tires than you might guess).

I am a long-time mountain biker with a whole lot of experience, and I’ve tried pretty much every mainstream mountain bike tire on the market.  I also have a master’s degree in finite element analysis.  And yet when I give people advice about tires, they never seem to listen.  They just go buy whatever hyped-up fashionable tire they feel like.  And yet people listen to you … what’s your secret?

What makes you think people take my advice?  Look, I get paid based on how many readers are assumed to read my column, whether not I have ever actually helped anybody.  This is true of all advice columns.  Who in history has ever checked up on Dear Abby’s readers to make sure they were well served?  Answer:  nobody.

This doesn’t mean there aren’t steps you could take to enhance your cred.  I hate to break it to you, but nobody cares about your master’s degree.  If you want people to pay attention, you’re going to have to kick all their asses on an actual ride.  (I’m guessing that you haven’t yet done that.)

This isn’t to say nobody is taken in by a really good stream of blather.  I worked at a bike shop with this young buck who really could talk the talk.  He could describe exactly how this or that tire would behave on the trail.  “The Panaracer Smoke is grippy, but the knobs are like this shelf and it’ll suddenly drop you off and you can lose control.  I prefer the good old Ground Control.  It’s not the tightest tire out there but it’s very predictable so you can just kind of ‘feather it’ at the very edge of traction.”  I was very impressed until I actually rode with the guy.  He descended off-road like a fricking grandma.  He could have gone that fast on slicks.

I’ve been all over YouTube looking for a instructional video about how to use tire levers.  The way some of these brutes drag the lever along the tire bead is downright frightening.  Surely that can’t be the right way to do it, can it?  Can you point me to a video of proper technique?

You are right to be skeptical of that technique.  And you sound hot!  Are you currently seeing anybody?  (Joking!)

Click here for a video of the proper technique, given by Dr. Tyre himself.
Posted by Dana Albert at 9:55 PM