From the time I was ten, I loved the late ‘60s TV show “Star Trek.” I bristled whenever some dumb kid called it “Star Track.” I even played “Star Trek” with the neighbor kids; I was always Kirk and my brother Max was always Spock. The show (in syndication) came on at 4 p.m. when I was in grade school and, for an enchanted year or two, my brothers and I were glued to our old black-and-white Panasonic TV every weekday afternoon. Our swim team era ended this family tradition, but I picked “Star Trek” back up in high school when it was on every night at ten. Years later, while in college, I turned my memories into this screenplay of sorts, which I mailed around to friends and family, for their amusement and in the service of an ulterior motive you will encounter shortly. 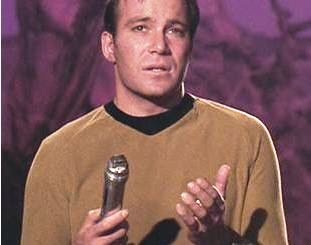 Captain Kirk was furious now. “Dammit, Scotty, we must have more power!” It irked Kirk how proud Scotty was of the Starship Enterprise, when the ship seemed to Kirk to be chronically underpowered and frequently on the brink of failure. Scotty responded, testily because he was secretly sick of wearing the same red and black Lycra outfit day after day instead of a kilt that might give his boys more breathing room while further cementing his Scottish heritage, “Aye, cap’n, the ship’s about to be torn apart! I can’t nurse any more outta her without those new dilithium crystals!”

Kirk pounded the armrest of his chair. He turned to his first officer. “Spock ... WHY?” he demanded. The Vulcan raised one perfectly plucked eyebrow as he answered: “Captain, your question seems rather illogical, given a certain lack of parameters....” Kirk cut him off. “Look, I want answers and I want them now! I am responsible for the dining and dancing pleasure of 400 people on this ship! Chekov, what’s our status?” The impossibly young looking Russian with the dark, girlish bouffant looked up. He seemed to always be looking up, and not only because Kirk’s chair was deliberately raised above the rest of the bridge, as if to insure his ego against any possible challenge. Chekov always seemed to be in a little bit of a crouch, leaning over his workstation as though very, very tired, and yet he sounded positively chipper as he responded. “Vell, Captain, this wessel is in serious danger.” The other helmsman, Sulu, looked to be on the verge of grinning, but then he couldn’t help it. Some people have a face that just wants to smile, and though such people normally end up in sales, Sulu was one of them. For the moment Kirk was done talking to people, with all their quirks and uselessness. He decided to consult the ship’s computer. “Computer: is ... it ... possible, that we have entered a ... parallel universe, in which this ship’s power can come from some ... alternative energy source?”

The computer hummed. “Work-ing ... situation possible ... power is available from certain formula of ancient Earth confection called cookies.” Kirk rubbed his chin thoughtfully, as if he had a goatee to stroke. “Computer: can you produce for me a ... recipe, for that formula?” Lights flashed. “Work-ing ... insufficient data.” Kirk again slammed down his fist. It was getting rather sore now, as he had been bashing it continually since the opening credits of the show. He turned to Dr. McCoy, who just happened to be on the bridge rather than in sick bay, where we can suppose he really belonged. “Bones ... can you develop a formula for these, these ... cookies?”

McCoy was as irritable as ever. “Dammit, Jim, I’m a doctor, not a dietician!” he spat. Spock, in an exasperatingly calm voice, intervened. “Would I be incorrect, Doctor, in presupposing that in your studies at the Star Fleet Academy, you were briefly exposed to the realm of medicine concerning nutrition?” Now McCoy was well and truly pissed off. “Well, pitchforks and pointed ears, that’s a typical green-blooded Vulcan thing to say! Why don’t you use your infallible logic to get us out of this mess!” As McCoy seemed almost angry enough for physical violence, a security guard named Jackson stepped in, ready to intervene. (Off screen, a technician named Brian queued up the standard fight music, just in case.) Kirk waved Jackson off, perhaps feeling a touch of remorse, for he knew that as with all security guards who take part in an episode, Jackson would surely die before the next commercial intermission.

Kirk had been blessed with an insight, which didn’t surprise him because precisely forty- three minutes into every episode, he was always blessed with an insight. He credited sharp script-writers for this ability. “Spock: is it possible that someone, a purveyor of some kind, somewhere in this galaxy, has the formula for these ... cookies we need?” Spock, as always, secretly wondered why Kirk would ask him such a question, since he was only a science officer who really shouldn’t be expected to know such things. “Well, captain, if we were to have Lieutenant Uhura send out a distress signal on all hailing frequencies, I would estimate our chances at approximately 40,000 to one.” Kirk hated it when Spock recited odds, because it reminded him of that hysterical gold robot from “Star Wars.” But Kirk liked these odds: anything better than million-to-one was good enough for this show.

He signaled Uhura, who fiddled with the little steel beehive in her ear. “I’m sorry, Captain, but there’s no response.” She was a bit frightened, since she in fact never seemed to get any response and had fallen back on the “transmissions are jammed” excuse so often, she wondered when Kirk might decide she was simply incompetent. Kirk rubbed his chin again. “That leaves us just one more option: our guest star. Spock, Bones, come with me.” Seconds later, the turbo elevator had brought them to the brig, where the dangerously hostile guest star, a tall and skinny twenty-year-old, was being held. The youth was alternating between smashing himself violently into the force field and writhing in pain.

“Nurse Chapel: why is this prisoner so hostile?” Kirk asked impatiently. The nurse, looking very beautiful in soft- focus, said, “Well, captain, have we ever had a guest star who wasn’t?” Kirk began to run his chin thoughtfully as Jackson, the faithful security guard, shut off the force field. Suddenly, the scrawny adolescent flew into action, beating the hapless security guard over the head with a giant college textbook. Kirk launched himself at the kid, punching the hapless lad several times before McCoy stuck in the Hypo and Spock gave him the Vulcan neck pinch. Kirk wiped a trickle of blood from the corner of his mouth as McCoy ran his medical tricorder over the sprawled boy. McCoy looked up, and with a note of remorse in his voice, said, “He’s dead, Jim.”

As Kirk stared blankly back, Spock spoke up. “That seems highly illogical, given that this particular guest star is a prime specimen of an ancient Earth breed called ‘Albert,’ known for extreme physical prowess and an almost uncanny ability to survive under extreme stress.” The blond-haired corpse, seeming to agree with Spock, rose up and scratched its head thoughtfully. “Dammit, Spock, do you have to ruin everything?” shouted Dr. McCoy. “That was my favorite line, and you ruined it!” McCoy turned his attention to Jackson, who lay on the floor, his head twisted at a grotesque angle. Again McCoy looked up at the captain, looking grave. “He’s dead, Jim. And Spock—not a word from you this time!”

Spock began to speak but Nurse Chapel shushed him. Not that she’d have minded watching Spock denigrate the doctor once again. Nurse Chapel hated McCoy for his lumpy skin and the bags under his eyes, and secretly wished she could be assigned to a spaceship with more creamy-skinned Vulcans on it. She sighed, reflecting that on a planet like Vulcan, the males—free from raging hormones and philistine impulses—might actually design Starfleet uniforms with skirts longer than eight inches.

Before long Kirk returned with the Universal Translator, with which he hoped to communicate with the guest star. “I’m Captain James T. Kirk of the USS Enterprise, representing the United Federation of Planets and Starfleet Command,” he said. The amused guest star stuck out his hand. “Hi, I’m Dana. I’d just like to say I really enjoy your show. The original show, I mean—not that ‘Next Generation’ crap. You are way cooler than Picard.” Kirk shook off the compliment. “Look, I need to know where we can get these ... cookies, so we can bring our life support systems back up to full strength and save the ship.” He was taking a gamble: if the kid didn’t know, they were basically doomed since there were only five minutes left in the show and Star Trek rarely went into a second episode.

“Well, uh, I guess I could write home asking for some,” the kid replied. “But I can’t guarantee anything.” Kirk considered arguing, and possibly more fist fighting, but wanted to save a few minutes of the show for some witty repartee on the bridge at the very end. He figured things would work out somehow, as they always did. He couldn’t help feeling a bit disappointed, though, as he was feeling less than typically heroic at how this one had come out. He wanted to hit out at someone, something, anything, but with the guest star behaving himself he had to settle for punching the intercom button. “Take her out of orbit, Mr. Sulu. Ahead warp factor two.”
Posted by Dana Albert at 1:06 PM