What follows is a work of fiction.  All characters are totally made-up and any resemblance of any character to any real person, living or dead, or to any person who might be born at any point in the future, is purely coincidental.  Even objects not described by a proper noun are fictional.  There isn’t even a real bowl, nor any pile of actual vomit, and there’s not really a carpeted van.  Please don’t sue me. 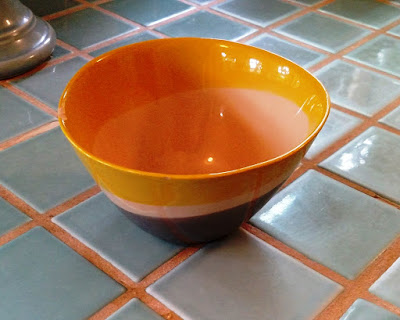 So, somebody left this bowl at my house after the party.  I figured I’d just hang out and somebody would claim it, but that hasn’t happened.  Which is sort of surprising, actually.

Maybe somebody (i.e., the somebody who brought the bowl) had a really bad time at the party.  It did get a bit crowded in the kitchen, which I thought was cozy and gezellig, but who knows, maybe somebody felt claustrophobic.  Or did somebody have a bad time because of me?  I don’t think I got that drunk, and I’m 99% sure I didn’t tell anybody off.  Anyway, if you want your bowl back but just can’t face returning to the house, fear not:  if nobody claims it, I’ll put it out on the porch overnight and you can sneak over and fetch it.

But I’m actually guessing I’m not the problem—it’s probable that the owner of the bowl just doesn’t want it back, for whatever reason.  Maybe this person just binge-watched a season of Hoarders Miami – Major Depressives and is suddenly repulsed by almost all household objects, and this bowl is just collateral damage from that experience.  Maybe this person leaves behind at least one object wherever he or she goes.

But that’s a long shot; probably this abandonment boils down to the bowl itself.  Maybe it’s got a storied past.  Maybe it was a wedding present from somebody’s then-stepmother, who had to be invited to the wedding even though everybody knew that marriage (between the father and the stepmother) was doomed, which it has proven to be, as this bowl has outlasted that marriage by many years.  Maybe the owner of this bowl always hated this stepmother (or worse, this stepmother-in-law) but somehow just kept the bowl around, it being a handy size, and recently had some subconscious impulse which, if it could be put into words, would be something like “Now’s your chance!”

Maybe it’s even worse than that!  Maybe somebody’s college roommate, a real sweetheart, not in that sexy girl-next-door way but more of a den-mother type way, made the bowl in pottery class as an ashtray, a terrific jumbo-sized ashtray because somehow this crappy little student-ghetto rental house attracted all the smokers, they all smoked like chimneys, and never dumped the ashtray so a normal-sized one was impractical.  So this was call the butt-bowl and when the sweetheart roommate became more skillful in pottery she made another ashtray that was shaped like a giant butt, the perfect butt-bowl, and it was this hilarious running joke all through college, and when everybody graduated Matt got the actual butt-shaped-bowl and my party guest got this, the original butt-bowl, and they continued to make random jokes about it over the decades until earlier this year when Matt (who’d been smoking since junior high) was diagnosed with lung cancer.  I wouldn’t want my butt-bowl back either.

Or maybe my party guest felt bad about this bowl because he or she has used it as a compost bowl for the last few years and—at the last minute before heading over—needed something to put the roast garlic in and just cleaned it out real quick, and then on the drive over his or her spouse/other said, “I can’t believe you’re bringing food in that—it reeks!” and they got in this big fight over it because the second spouse/other has always hated the smell of compost and couldn’t scrub the smell out of that bowl, no matter how hard he or she tried, and in fact had a childhood trauma around being made to eat a hard-boiled egg at a campground once even though he or she hated them and was sure to vomit, which he or she actually did, right there at the campground, and it was fricking pink for some reason, and something about the smell of decomposing compost always brings him or her right back to that campground and “Can we please, please get a proper compost bin with a tight-fitting lid, and never look at this stinky bowl again?”

Or maybe the truth is even darker.  Maybe my party guest got this bowl from her mom, who divulged a chilling back-story.  Maybe the mom grew up in a totally dysfunctional family, both parents complete drunks, and one night they were all actually cooperating in the kitchen, cleaning up and washing dishes, and it was almost pleasant and she thought, “We’re all getting along, like a real family!” and then something snapped, maybe her dad insulted her mom, who threw a plate at him, and he threw a mug at her, and next thing you know the kids are taking sides and the whole family is screaming and throwing bowls, plates, cutlery, it’s all smashing all over the place, and this goes on for like five straight minutes and it’s a miracle nobody gets hit by a flying saucer, until everything is broken, and amazingly they all start laughing, and (the mom concludes), “It was actually kind of fun, if you can believe that! And then I discovered this bowl hiding under a towel, the sole survivor, and I decided since it could have just as well been broken, I’d take it for myself, and I kept it when I went off to college and had it for decades until I just couldn’t handle all this history anymore, which is why I gave it to you.”  And her son or daughter used it for years too, until he or she came to the same conclusion about its history, which is why it’s going unclaimed now.

Wow, the ravings of a lunatic!  Of course the truth must be simpler and less dramatic than all that.  Not that it’s completely simple, or the bowl would have been claimed by now—but surely nothing sinister is going on.  Maybe the partygoer has a secret that’s not so dark, but a secret nonetheless, which exerts a small but nontrivial force.  Maybe he (to randomly pick a pronoun) was poking around in a thrift store or pawn shop with his wife/other, and saw her admiring this handmade bowl, and she said, “You can tell it’s handmade because it’s imperfect—the rim isn’t perfectly round, see” and he could tell she liked it, but she never bought anything for herself, even a used bowl that’s like a buck fifty, and they left without it, and the next day he sneaked back there and bought it, figuring that when, a day or two later, she would say, “I should have bought that bowl, I really liked it,” he could magically produce it, and she’d throw her arms around him and nuzzle at his neckline.  And his scheme actually played out, almost exactly like that, except that when he went to buy the bowl, the clerk said, “Oh, you know what, I actually have the box that came in!” and went to the back and fetched a box that had a photograph of the bowl on it and the words “Real Ceramic Bowl” and when he looked closely he saw that even in the photo the bowl had that irregular rim, for that clumsy handmade look, so that he could imagine hundreds, thousands of these streaming down a conveyor belt, all absolutely identical with the same fake imperfection along the rim engineered to give the bowl a handmade (dare we say “artisanal”?) look, and so of course he threw away the box before presenting the bowl to his wife, and his wife never knew the truth, and she thought warmly of the bowl for all those years so every time he saw it he felt kind of shitty.  So, having left it behind at the party, he’s hoping she won’t figure out where the bowl went to.

Or maybe, just maybe, the bowl has no interesting history at all, but something about it triggers unpleasant memories anyway.  Maybe it’s something about the stripes, about how instead of being straight and level they rise up on one side, like a curling lip, like the perpetual sneer, more of a smirk than a grin, that that one kid on swim team always had … what was his name?  Mike King.  Who always seemed to be making fun of you, who pretended to be nice but this was a form of mockery, and you badly wanted to believe he was being nice for real, so much so that when, after the Cherry Creek Invitational swim meet, he invited you to listen to Kiss in the back of his uncle’s van, you actually said yes, and you sat uncomfortably in this carpeted van listening to this weird music you didn’t like, and Mike King smirking the whole time, and when you left the van (squinting in the sudden, dazzling sun) you couldn’t find your family, and when you did they bawled you out for wandering off, where the hell were you, and then you found out they went out for pizza, which your family never did, and you missed out, and your brothers rubbed this in mercilessly until you pitched a massive tantrum, one that was so big it became bigger than you, to where you didn’t even know how to shut it down, and all the while you were tantrum-ing the family was making this grim procession back to the car—it seemed like miles—and somewhere along the line it dawned on you that you were too old for tantrums like this, and this would have to be your last.  Having all this memory bubble up every time you look at the lopsided stripe on this bowl … I can’t blame you, I wouldn’t want the bowl back myself.

You know what?  I will confess I’ve inherited things before after parties, little Tupperwares or serving spoons or whatever, and when they’ve gone unclaimed and become part of our stuff here, I didn’t really mind.  But in this case, I don’t think I can ever accept this bowl as one of my own.  It’s just too distinctive and too freighted with possible significance.  So please, somebody claim it—but for God’s sake don’t reply-all.  And seriously, if I don’t hear from anybody by Sunday night I’ll put it out on the porch for you.  Please, please come get it.
Posted by Dana Albert at 9:34 PM