From the Archives - The Closet, or My Claustrophobia

Ever wonder what it would be like to be really, really claustrophobic? Well, I am. Read on for a tour of this sometimes absurd phobia. 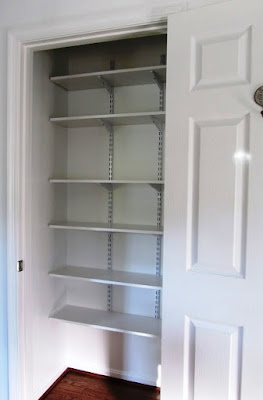 I’m terribly claustrophobic. When I have a bad dream, it often involves being inside a tall tower, making my way up a spiral staircase and having to crawl through progressively smaller openings between floors. Often I’m trying to keep up with somebody who is much better at squeezing through. Usually I reach a gap that’s too small to squeeze through, and I don’t have enough room to turn back. I’m trapped.

In my waking life I’m pretty good at staying out of small enclosures, but my phobia can still strike. Nine years ago I had a bizarre episode. I was at home alone and attempted to fish a cat toy out from under a solid, 7-foot-tall cabinet (aka “entertainment center”). There was a six-inch gap below the cabinet, but a strip of trim between its underside and the floor made for a narrow gap. Lying on my side on the hardwood floor, I was able to work my arm underneath and feel around for the lost toy. I groped around until I found it, then tried to pull my arm out. Alarmingly, it got stuck at the elbow.

No matter how I twisted and turned my arm, I could not get it out from beneath the cabinet. How had I gotten it in there? It was like a strange puzzle. Could it be, I wondered—my anxiety growing—that removing my arm might actually prove impossible? Was this a one-way deal, like a fish hook or a funnel? My arm writhed, chafing against the rough wooden trim of the cabinet. The absurdity of the situation wasn’t lost on me, but I couldn’t find it funny. My breathing got faster as I started to descend into panic.

Of course there was no actual danger, but such is the nature of a true phobia. Anybody would be uncomfortable being, say, buried alive in a coffin or trapped in a mine, but the true claustrophobe falls prey to utterly irrational notions. I have always cultivated in myself a highly ordered, rational mind—my older brothers used to call me “Logic Lad”—but part of my brain doesn’t always play along. So it was now, as I lay there stuck and fuming. I knew full well that, in this large, high-ceilinged living room, I could not run out of air –and yet I believed I already was.

It’s not hard to guess where this claustrophobia came from. It was brought on, or at least hugely exacerbated, by a cruel game my brothers called “The Closet.” They stumbled on it when I was nine and they happened to throw me in the front hall closet where we kept coats, boots, and the vacuum cleaner, and discovered to their delight that I began to freak out. So they hauled me out of there and dragged me down the hall to a tiny linen closet. It had shelves from floor to ceiling that extended to within eight inches of the door when it was closed. I had to turn my head to keep my nose from getting crushed as the door slammed shut.

My cheek was pressed against a stack of towels, and I inhaled the faint scent of the detergent they’d been laundered with. This could have been a pleasant smell had I not suffered the sensation of gradually suffocating. The smell became stronger as, hyperventilating, I beat against the door of the closet and begged for mercy. The doorknob on the inside had been broken off and never replaced, and I tried in vain to turn the stub as a brother held the knob on the other side.  When I thumped against the door, the dull thud told me my brothers were leaning against it; even if I burst the latch I’d still be stuck. My tormentors cackled and shrieked with glee. That their voices were muffled by the door made me feel I was stuck not just in a closet but in an impenetrable vault.

“Guys! Please let me out! The air is getting thin!” I wailed. They became utterly engulfed in laughter. When they could finally talk they all mocked me: “‘Ooh, the air is getting thin!’ Did you hear that? ‘The air is getting thin!’” They laughed their asses off. I beat my toes, knees, hands, and elbows futilely against the door as tears streamed down my face. Only my brothers’ eventual boredom could save me, but I couldn’t help but beg for mercy. The irrational part of my brain foolishly believed my brothers weren’t 100% cruel. Finally, when my energy gave out and I could only sob quietly, my brothers finally lost interest and set me free.

In a just world, I’d have come out swinging, decking each of my brothers in turn, maybe breaking out some sweet karate moves they never knew I had. But in the real world of my childhood, I had absolutely zero recourse. I suppose I could have gotten in one good sucker-punch to somebody’s kidneys, but that would only make things worse: they’d beat the crap out of me and then put me right back in that linen closet. They’d discovered my Room 101.

Not that they needed any excuse to put me in there. From the day they discovered The Closet, my brothers would inflict it whenever they were bored or had a new friend over who hadn’t yet witnessed the spectacle. My brothers never questioned their God-given right to torment me for their own amusement. The twins, three years older than I, were very shy at school and swim team, but at home, with my parents perpetually absent, they ruled like storm troopers. The middle child longed to be accepted by the twins, and thus unquestioningly did their bidding. (They enjoyed snubbing him anyway.) I was the baby: quiet, bookish, and aloof, which made me a natural target for the twins and their lackey. Any time I was approached by more than one brother, I’d instinctively make a run for it, but they’d always catch me, and begin dragging me towards the hallway.

Come with me for tour of the brutal ritual. My skin burns against the cheap, nylon, orange-red carpet of the house as they drag me. In the front hall, just before the living room, is a flight of stairs down to the basement, and there is a wrought-iron railing around the stairwell. As we pass this railing I tear a hand free from my brothers’ clutches and seize it. The instant my hand touches the iron rail, I get a big shock from the static electricity my body has stored up from being dragged across the carpet. I rip another hand free and, lacing my arms and wrists through the railing, grasp each hand with the other. My brothers continue pulling on my body, so I’m stretched (like taffy, it feels like). The rails are fashioned in a twirl, like fusilli, and they chafe painfully against my wrists. Grunting and laughing, my brothers keep pulling until my hands get too sweaty to maintain their grip.

I grab the edge of the floor where it ends at the stairwell. The carpet is secured by tiny, headless nails, which scratch my fingers as I’m pulled away. Next I lunge for, and reach, the edge of the sofa, a big blocky thing upholstered in cheap velour, its color halfway between burnt orange and silly putty. My panic is giving me a superhuman grip, so as my brothers pull on my ankles, the sofa slides away from the wall. Pathetically, even as I suffer I secretly hope my big brothers admire my strength.

My brothers cooperate, like hyenas. “Go after his arms! Pry his fingers off!”

I can’t resist forever, and they eventually pull me free, drag me down the hall, jerk me to my feet, and stuff me into The Closet, squishing the door against me until the doorknob latch clicks shut.

That’s when the real misery starts, that I already described.

Thank God I’m through with all that. Over the years I inevitably caught up to my brothers in size and strength, and who knows, maybe they developed some humanity. The Closet was finally abandoned—but the claustrophobia I’m stuck with. Which is how, decades later, I managed to find myself inordinately close to panic from seeming to be trapped in a large, airy room.

I tried rocking the cabinet with my free hand, but it wouldn’t budge. For the first time, I longed for the cheap stapled-together furniture of my college days, which you could knock over with harsh language. I focused my gaze on the stuccoed ceiling of the living room, high above me. This is a huge room, I told myself. My wife will be home in six or eight hours and there’s no way I’d suffocate in that time.

Could anybody else help? To distract myself from my confinement, I listened to the world outside my house: the percussive sounds of a construction site; the groaning power-take-off of a garbage truck; a commercial vehicle backing up, beeping shrilly; the neighbor’s baby screaming; the squawking of birds in the trees. I was calming down enough to appreciate how much goes on in a quiet neighborhood, not including a grown man stupidly pinned to the floor of his living room. I was eventually able to actually chuckle at my lugubrious plight. I pictured my wife finding me, and laughing at my predicament—except actually she wouldn’t, on second thought. Only the legacy of my brothers’ taunts had me imagining such a thing.

And then, seized with fresh determination, I tried again to free myself. With a flinging, twisting, rotating, wiggling, and yanking motion, I finally ripped my arm out from under the cabinet. I suffered a sizeable scrape in the process, but it was worth it—I was free! I chucked the cat toy over to Misha (how long had she been slyly watching me?) and got on with my life.

Looking back now (in 2015), do I think I was emotionally scarred by this?  Any shell-shock?  No, probably not ... the claustrophobia my brothers discovered had to be somewhat innate.  And do I hold a grudge?  Nope.  Take a look at my last post ... my friendship with my brothers is alive and well.
Posted by Dana Albert at 10:49 PM