From the Archives - The Paperboy

I’m running out of archival stuff to recycle on slow news days.  So today I’m going way, way back and posting something I have only in hardcopy, from 1986.  Since I don’t feel like retyping a lot of text, or messing with a scanner and OCR software, I’m posting an old poem.

As a bonus, I’m going to provide all-new end notes on this poem.  Pretend you found this in your Norton Anthology of American Teen Poetry. 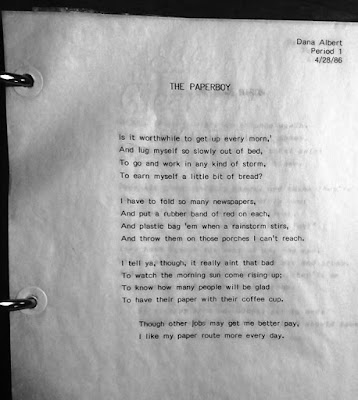 Is it worthwhile to get up every morn
And lug myself so slowly out of bed, ooooooooooooooooo2
To go and work in any kind of storm,
To earn myself a little bit of bread?

I have to fold so many newspapers,
And put a rubber band of red on each. ooooooooooooooio6
And plastic bag ‘em when a rainstorm stirs,
And throw them on those porches I can’t reach.

I tell ya, though, it really ain’t that bad
To watch the morning sun come rising up;oooooooooooo10
To know how many people will be glad
To have their paper with their coffee cup.

oooThough other jobs may get me better pay,
oooI like my paper route more every day. oooooooooooo14

This line is pretty absurd.  I mean, everybody gets up every morn.  The point I was trying to make is how fricking early I had to get up.  But the poem doesn’t say anything about that.  The reader has no idea.  It’s a good thing I went easy on myself as a teenager, or I wouldn’t have written anything.

For the record, I had to get up at 5:50.  The route had to be done by 6:30.  This was not a crunch.  Folding the papers—there were about 30 of them on weekdays, 45 on Sundays—generally only took a few minutes.  My record was well under 3 minutes.  As far as the delivery, it was also really fast because this was a condominium complex so all the porches were really close together.  I figured out the optimum path through them, which in some cases meant throwing the newspaper onto a subscriber’s back deck (which confused people at first, but they caught on).  I did the route on my bike and could hit every porch without even putting my foot down.  My record for the whole route was around five minutes.

If I had unfinished homework, I’d do that as soon as I got back home.  If I didn’t, I often went back to bed.  During the summer, I always went back to bed.  Sometimes I’d wake up around 9 and panic, having no memory of delivering the papers.  I’d run out on the back deck and check the patio of the downstairs neighbor, which was always my last delivery.  The paper would be there and I’d breathe a sigh of relief.

Considering that all paperboys, back in the day, were children, it’s amazing how stringent subscribers’ standards were.  It could be pouring rain, or gusting at 50 mph, or there could be two feet of snow, and if I was five minutes late finishing my route, at least one customer would call and complain.  Imagine, grown adults sitting there impatiently, staring at the clock, phone in hand, waiting for 6:30 to come and go so they could dial up the Daily Camera circulation desk and rat me out.

The complaints were taken very seriously and reported back to me on the computer printout at the top of the stack of the next day’s papers.  Complaints were called “kicks” and if you got more than like one a month, you’d get docked.  Paperboys prided themselves on going months and months without a kick.

Once, before I had my own paper route, I was subbing for my brother and hadn’t gotten the hang of throwing the papers yet.  I missed a porch by a mile and broke a garage door window.  This caused a big scandal, with my dad getting an angry phone call, and he had to go replace the window himself.  All the adults involved seemed not only disgusted but outraged, as though I’d cut the subscriber’s dog’s head off and stuffed it in the mailbox.

Line 5:  so many newspapers

I shudder to read this line.  The meter is all screwed up.  The word “newspaper” is dactylic—that is, it has one stressed syllable followed by two unstressed.  For that reason, it cannot be used (no dactyl can) in a line of iambic pentameter.  Obviously as a lad of 16 I didn’t grasp this.  In my defense, I didn’t have access to a handy blog post explaining how to write a sonnet (the World Wide Web didn’t even exist), and I didn’t get to take a private sonnet class.  I just had to wing it.

Geez, this is embarrassing.  “Rubber band of red” ... how poetic, in the worst possible way.  If I were to yield to temptation and fix this sonnet up, I’d change the line to, “And put a fricking rubber band on each.”

Line 8:  those porches I can’t reach

Man, kids are so stupid, even the ones who write sonnets!  Well, at least I was.  In truth there were only a couple of porches (those in my condo quadrangle) I could drop the paper on.  The vast majority I had to throw.  Everybody knows that.  Well, everybody except modern people who may not even know what a paperboy is, or was.  I think it’s silly for adults to deliver newspapers using their cars.  I see them out when I do really early bike rides.  But then, I guess it’s a sign of the times ... there are so few subscribers, the routes have to be really long, etc.  I had no idea, when I was a paperboy, that I was an endangered breed.

Line 10:  to watch the morning sun come rising up

First of all, “morning” is needless here, since the evening sun doesn’t come rising up.  I should have put “watch the egg-yolk sun come rising up.”  But the line would still be flawed, as the whole idea is fanciful, if not downright sentimental.  Think about it:  I’d do the whole route in 5 or 6 minutes, so what are the odds I’d catch a sunrise?  I guess I could have seen them for brief periods during the spring and fall, but I doubt I paid much attention.  There’s something almost cynical about how I trotted out this old cliché about enjoying a sunrise.

I suppose I should mention that I really didn’t try very hard, or take much time, on these sonnets.  This was one of four sonnets I wrote on 4/28/86.  (I may have written all four in class.)  The fact that there’s no grade on this one suggests I didn’t even bother to turn it in.  These were for  Mr. Kroop’s 10th grade creative writing class at Fairview High.  He was a groovy guy who wore Jams and tie-dye shirts, and played weird music (perhaps involving whales?) in the classroom.

Line 12:  have their paper with their coffee cup

Considering how important the morning paper is to people’s daily rituals, it’s kind of surprising to look back and consider how ungrateful my subscribers were.  How do I know they were ungrateful?  Well, I already mentioned how often they’d complain.  On top of that, they never tipped.  There was a holiday tradition of paperboys putting handwritten cards in each subscriber’s newspaper, as kind of a hint-hint gesture.  I can’t remember what the tipping mechanism was, but there was one, and I always enclosed the cards, but I almost never got tips.

The better way to get tips was to deliver the Denver Post instead of the Daily Camera.  With the Post, you had to go door-to-door collecting the subscribers’ payments.  (This ritual is parodied in “Better Off Dead,” with the paperboy hounding the hero throughout the movie for his “two dollars!”)

The downside of “collecting,” as it was known in the trade, was that there were a whole lot of deadbeat grownups out there who were either never home, always pretending not to be home, or not able to cobble together the cash to pay the paperboy.  The paperboy, meanwhile, had to pay his employer (i.e., the newspaper), regardless.  This is how two of my older brothers managed to lose money on their paper routes.  Imagine doing all that work, and ending up in the red!  Those poor bastards.

On the flip side, my best friend delivered the Post, and took the liberty of jacking up the subscription rates when he collected.  He was practically printing his own money!  I challenged him on this, and he said, “The way I see it, I’m buying the papers from the Post.  I should be able to sell them for whatever the market will bear.”

The Camera didn’t require paperboys to collect.  My boss told me, rather bitterly, that I was the highest-paid paperboy they had.  I made six cents a paper—about $1.80 a day, and $2.70 on Sundays, for a total of about $55 a month.  The going rate was about five cents a paper.  And the guys who delivered to single-family dwellings needed more like 15 minutes to do the whole route.  Suckers!

My mom loved this sonnet.  I was working at the same hospital she worked at, typing lab manuals into the computer.  That paid like $8/hour, which was a fortune to any teenager in the mid-‘80s.  We both reported to the same manager, who was a real jerk.  My mom actually showed him this sonnet, to try to scare him when he balked at giving me a raise.  I’m sure I took that threat even less seriously than he did.  (As I recounted at the end of another post, I made a serious career-limiting move with that boss, so it’s a good thing I had my paper route to fall back on.)

It strikes me that there was something noble about the paperboy.  Today, it’s hard even to find an adult with such an unfailing work ethic.  We were responsible for our route 365 days a year.  If we went on vacation, that was never the newspaper’s problem—we were required to get a substitute.  In my case this meant having somebody all trained up on how to do my route, which was difficult because the condominium complex’s address scheme was truly byzantine.  (There’s a reason I was the highest paid paperboy at the Camera.)  Imagine trying to motivate somebody to learn your route just so he’d have the opportunity to earn $1.80 a day while you were on vacation.  Honestly, I don’t know how I did it.

So, are modern teens willing to do this kind of work, for similar wages?  Don’t make me laugh.  These days there are probably more teenagers writing sonnets than delivering the paper.