Any cycling aficionado will tell you that Milan-San Remo is the most boring one-day race on the entire World Tour calendar.  And you know what?  That’s an unfair thing to say, because actually some cycling aficionados will say it’s quite exciting.  This minority of fans is actually wrong, of course.  The fact is, MSR is a boring-ass race.  The course is too long, and too flat, and the only action that matters is on this tiny little climb toward the end that wouldn’t figure at all except that certain really fast sprinters almost couldn’t make it over a speed bump after almost 300 kilometers of racing. 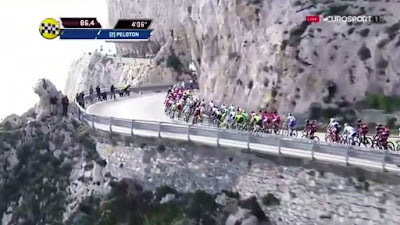 Being boring, this is a perfect race to follow through my biased blow-by-blow report.  If I think a rider is doping, or ugly, or both, or too dependent on his race radio, I’ll say so.  And if I don’t even know for sure that they’re even using race radios, I’ll just guess.  And if the action gets too boring, I’ll share other tidbits such as riders’ beauty tips to make sure you’re entertained.

The big news this year is the defending champion John Degenkolb (Giant-Alpecin) will not be lining up in Milan to defend his title.  Evidently he’d promised his wife he’d stain the deck this weekend, having totally forgotten about the race, and his wife put her foot down and wouldn’t let him weasel out of it.  She’s having her family out to visit next week and by god this has to be done, etc.  So the race is really up for grabs now.

As I join the action, there are 78 kilometers left to race.  There’s a breakaway of nobodies 3:39 up the road, and some of them are pretty funny-looking.  One of them has the goofy superhero sunglasses and the Euro-trash mullet.  You can see him at the far left in this photo.  Also note the leader’s ridiculous handlebars.  These nobodies always look a little off to me. 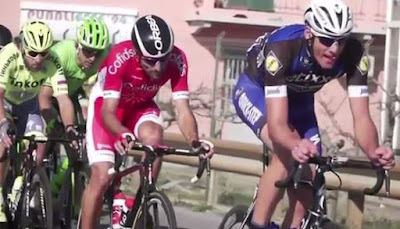 “It’s going to be interesting to see how things pan out,” declares the anonymous Eurosport commentator uselessly.  Has this ever not been true for any bike race, or any sporting event?  I’m going to have to play the devil’s advocate here and tell you:  it’s going to be really boring seeing how things pan out.  Or, conversely, it will be really interesting to walk away from my PC at the end and not see how it pans out.

The peloton is in the feed zone, grabbing musette bags while riding by at like 30 mph.  Pretty impressive.  Little known fact:  almost 40% of English-speaking World Tour riders still call musette bags “horsey bags.”  Apparently that’s what Lance Armstrong called them, and riders either mimicked him out of respect, or because they were scared not to.  Following Lance’s doping scandal, it’s believed that at least half of the riders still saying “horsey bag” are doing it ironically. 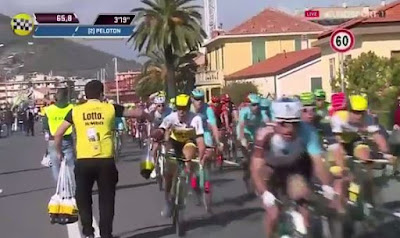 The commentator just used the phrase “uphill sections of the climb.”  Where do they find these guys?

It’s 61.3 kilometers to go.  To catch you up on what’s happened since the starting gun went off:  everybody started pedaling, at a “ferocious tempo” according to the Eurosport guy.  Eleven riders broke away.  Their lead has fluctuated between zero and five minutes.  Everybody has been pedaling most of the time.  There is very little coasting.  No rider has gotten lost.  The weather is fair.

With 56.8 kilometers to go, some riders crash! 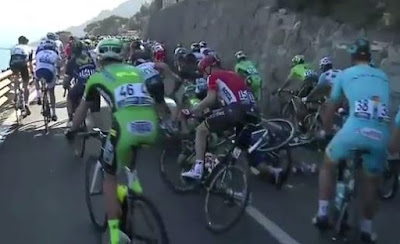 Nobody slid under barbed wire fence or anything dramatic.  One guy looks like he may have scuffed his shoe.  I’ve definitely seen more interesting crashes, such as this one. 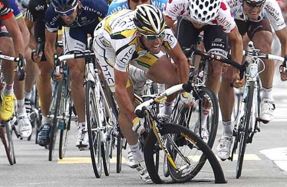 Look at how that wheel collapsed!  Pretty sad that I have to go back to the 2010 Tour de Suisse for an example of a fascinating crash.  On the plus side, look at the damage to this wheel from the crash that just happened: 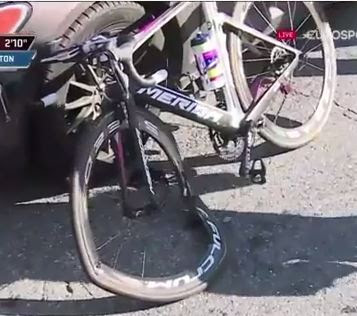 “It does suit a rider who can ride well,” the announcer says of the finishing stretch of this race.  Is that what passes for insight these days?  I sure hope this is just the B-team, and that we’ll get the good announcers for the last few dozen kilometers.

How come kilograms got to be shortened to kilos?  Who decided that mass is more important than linear measure?  I’d love to type “kilos” instead of “kilometers” but I’d confuse my readers.  It’s so damned unfair.

With 48.5 kilometers to go, the lead is down to 1:38, so it’s like this breakaway never happened.  Maybe one or two of these guys will tell his grandkids, “I was in a breakaway in Milan-San Remo once.  We got caught.”  To which the sniveling little grandkid will reply, “Dammit Grandpa, stop living in the past!”

I interviewed race favorite Peter Sagan (Tinkoff Team) earlier this morning.  He said he didn’t care about the win—he just wants to make the podium so he can show the world how well-behaved he can be this time.  He was referring, of course, to his infamous misstep when he squeezed a podium girl’s tush after the 2013 Tour of Flanders.  I’d always wondered how he expected people to react.  Did he figure the commentators would say something favorable?  “Ah, and there’s Sagan, the perfect gentleman, giving the podium girl a little affection.  A less refined racer would be grabbing handfuls of ass right now.”  I asked Sagan what he was thinking, if anything, when he did that.  “Well, actually, I meant the gesture as a social commentary,” he replied coolly.  “I’ve always been bothered by the barbaric practice of having young models kiss sweaty racers after the race, and I thought by tweaking this retrograde tradition just slightly, I could highlight the absurdity of it and put the sexism issue into starker relief.  And actually, I arranged the whole thing with the podium woman beforehand, so she wouldn’t be surprised.  She’d totally agreed to it and then changed her mind later and acted hurt.  I don’t know what her deal was … probably she was on the rag.  Oh no … did I just say that out loud?”

Sagan is an interesting racer.  On the one hand, he can do a no-handed wheelie while climbing a Huis-Categorie grade, and can ride right up onto the roof of his car.  On the other hand, he looks like the guy on the cover of a romance novel, and has the intellect of a baitfish. 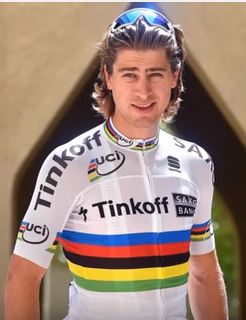 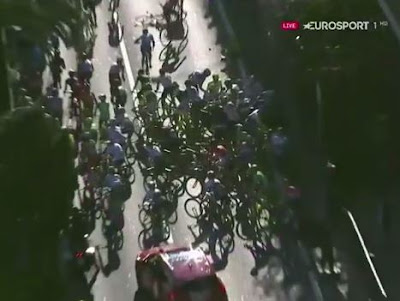 I thought that by employing the exclamation point I could get you excited about the crash.  But it wasn’t that exciting, actually.  If these guys were required to ride with nitroglycerin or some other highly unstable substance in their jersey pockets, such that they actually exploded upon impact, I think you’d see a lot fewer crashes, but they’d be really exciting ones.  The only significant news from this crash is that Geraint Thomas (Team Sky) was involved.  That might cost him the race, if he’s hurt.

In looks like Michael Matthews (Orica-GreenEdge) was also caught up in the crash, as he’s furiously chasing the peloton now.  Matthews won two stages at Paris-Nice recently, so he must fancy his chances here today.  Of course, he probably wouldn’t say “fancy” like I just did.  That’s not a very common word, even though it can be used as an adjective (e.g., fancy pants), a verb (e.g., fancy his chances), or a noun (e.g., Cat Fancy magazine).

There are 26 kilometers left and the breakaway has just 15 seconds.  I wonder which chaser will be the first to say, “Okay, guys, the fun and games are over!”  Man, I’d like to be that rider.

I had a brief chat this morning with outside favorite Fernando Gaviria (Etixx-Quick-Step).  Though only 21 years old, and riding in his first MSR, he’s being supported by teammate Tom Boonen, who has decided he no longer enjoys training and will use his huge talent to be an out-of-shape domestique from now on.  Gaviria was nervous before the start.  “My mom’s gonna kill me,” he said.  “I put my retainer under my napkin at dinner last night and must have forgotten about it.  That’s the third one I’ve lost!”  Gaviria is the only rider in this race who is undergoing orthodontia, but a lot of these riders still live with their parents. 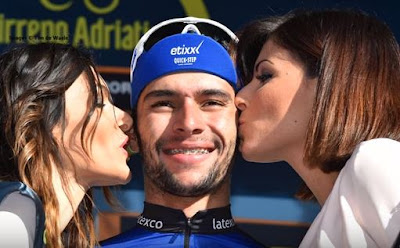 With 23 km to go, the peloton is all back together—but somebody attacks!  It’s Giovanni Visconti (Movistar Team) and Ian Stannard (Team Sky) and they quickly open up a nice gap.

Stannard has accidentally dropped Visconti but I’m sure they’ll be back together soon.  Could they hold off the field for 18 kilometers?  Of course not, but they’re surely hoping other great riders will bridge up.  Fabian Cancellara (Trek-Segafredo) would be just the rider to do that, because he’s plenty strong but of course couldn’t win a field sprint because he’s older than George Burns.

Three more riders have joined the lead duo.  They’re about 7 km from the Poggio, which passes for a climb after so many hours in the saddle.  The lead is down to 15 seconds with Katusha and BMC leading the chase, and Etixx-Quick-Step starting to get their guys in position.  I have to predict an Etixx-Quick-Step victory because two of the widely touted favorites are on this team (Gaviria along with Zdeněk Štybar), and it can’t hurt having Boonen helping.

With 2 km until the Poggio, the group is suddenly caught.  I never even got those other three guys’ names.

It’s under 10 km to go and Greg Avermaet (Team BMC) is on the front drilling it, as he is wont to do.  Michael Matthews has reconnected to the peloton but is dying on the back.

“It’s all about going as hard as you can,” says the practically brain-dead commentator.

Alexander Kristoff (Team Katusha) is well placed.  Obviously he’s a favorite.  His boys are collected at the front along with a bunch of BMC guys.  The pace doesn’t actually look that high … the group is pretty much gutter-to-gutter whereas if the hammer had gone down, it’d be a narrow line.

Some dude is attacking!  It’s Filippo Pozzato (Southeast-Venezuela) according to the graphics, but the announcer says, “No, it’s not, it’s number 180.”  There is no number 180 in this race, according to the cyclingnews start list.  So I have no idea who this guy is.  Fortunately, he’s caught and dropped.

Kristoff attacks, followed by Michal Kwiatkoski (Team Sky)!  This could be a really good move!  He’s first over the Poggio!  And now Vincenzo Nibali (Astana Team) is going after him!  What, are you kidding?!  We got us a bike race here!

With 5 km to go, Kwiatkoski has a handful of seconds, but Nibali and Cancellara are closing fast!  But as the road goes up with about 4 km to go, the gap is going back up!  Nibali goes for it up the left of the road, just flying!  With 3.2 km, Kwiatkoski has 4 seconds and still looks great! 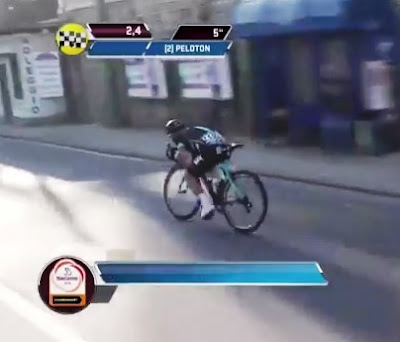 Right on schedule, my feed freezes!  My wife is running the microwave and it’s jamming the WiFi!  I’m doomed!

Whew, I got my wife to delay her breakfast and now my picture is back.  With 1.8 km to go, Etixx-Quick-Step is drilling it on the front and 5 seconds isn’t much anymore.  Cancellara is on the warpath now, and Edvald Boassan Hagen (Dimension Data) flies off up the right side, joined by Van Avermaet with 1 km to go!  Boassan Hagen is killing it on the front with 500 meters to go!  Cancellara isn’t far back!  Now they’re looking at each other, and a dude stacks!  But somehow, not a single rider is taken down with him!  DAAAAAMN!

The road is slightly uphill and the sprint is well underway!  Wow, it’s some random FDJ guy on the front! 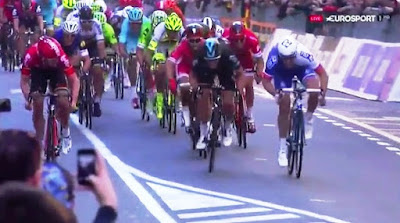 And the race goes to Arnaud Démare, a Frenchman! 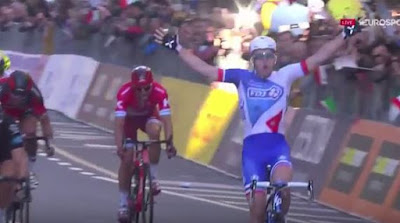 A Frenchman hasn’t won this in like twenty years!  The dude is totally stoked and as he is mobbed by his teammates, he’s whooping like an American, like a cracker from the deep South no less!  What a win!  What a race! 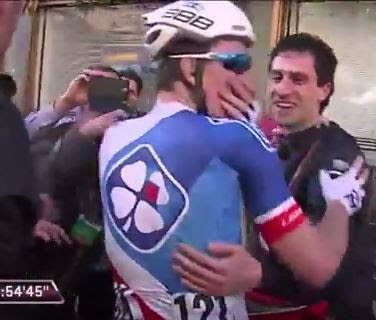