Biased Commentary - Did Démare Cheat in the 2016 Milan-San Remo?

I was alerted to this scandal by one of my readers, who posted a comment below my Milan-San Remo post.  The comment was from jianbino311 and read, “nike air max michael kors outlet air max 2016 rolex watches camisetas futbol baratas giuseppe zanotti outlet wallet sale kobi 9 tods outlet.”

Just kidding.  I don’t know why I get so many comments like that, but the one I’m actually referring to was from Darwinian and read, “We’ll need a follow-up post of course, given the allegations of Démare having taken a tow from a team car, and the whole question of whether his Strava data helps or hurts his insistence that he did nothing wrong.”  Darwinian, ask and ye shall receive! 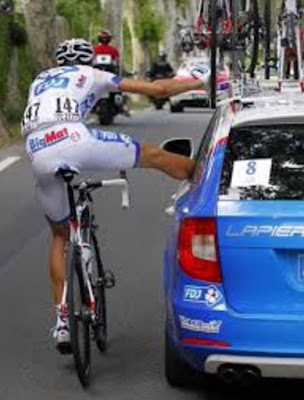 The basic facts of the case

Milan-San Remo is quite long and features just two climbs, both very close to the finish, which sometimes keep the race from being decided in the last 500 meters.  The climbs are rather short but never fail to eliminate several top sprinters.  This year there was a crash less than 30 kilometers from the finish, before the first climb, the Cipressa.  This crash eliminated some of the favorites, who either couldn’t catch up or wore themselves out doing so.  After several breakaway attempts, the peloton came back together and the sprint was won by “some random FDJ guy” (as I put it in my coverage), who turned out to be a young upstart named Arnaud Démare.

Shortly after the race, two riders—Matteo Tosatto (Tinkoff) and Eros Capecchi (Astana)—came forward and said that they saw Démare taking a tow from his team car on the way up the Cipressa.  The race judges decided not to sanction Démare because there was no video evidence of his being towed.  Under questioning, Démare’s FDJ directeur sportif, Frederic Guesdon, who was driving the car that allegedly provided the tow, surprised everybody by saying, “How should I know if Démare took a tow?  I was watching the road!  But he probably did cheat because he’s actually kind of a dick.”

No, of course Guesdon didn’t really say that.  He apparently saw the whole thing—that is, saw the tow not happen—and said so to the press.  Then Démare himself denied the accusations, and it might have ended there, but people kept asking to see Démare’s power stats, which would presumably show any anomalies (i.e., setting a world-record pace up the Cipressa while putting out less than 100 watts).  Guesdon said, “If there’s really a polemic about this, we’ll ask Arnaud to release his power files.”  The files were never released, so everybody flocked to Démare’s Strava page, only to find that the file for this race had been removed.

But wait, there’s more!  A Dutch journalist captured a snapshot of the Strava file before it was taken down, and discovered that Démare had achieved the Strava KOM for the Cipressa—that is, he went up it faster than any Strava member in history.  Subsequently, Démare put the Strava file back up.  Alas, the file does not include any power or heart rate data.  It’s been over a week and nothing official has happened, so it appears Démare will keep the win, but with a huge asterisk in the eyes of many fans (which sounds painful, doesn’t it?)

Is Démare an unfairly accused champion, or an asshole?  I’ll attempt to get to the bottom of that question, starting with the evidence in Démare’s favor.

First of all, one of his accusers, Mateo Tossato, didn’t actually see Démare holding on to the car; he explained, “I didn’t see if he was on the car window or with a [sticky] bottle.” The implication is that it was one or the other, but in a sport where riders have blamed failed drug tests on a lost chimera or smuggled beef, it’s not that hard to slip between the horns of the dilemma and say Démare held neither a sticky bottle nor a car window.  Tossato simply didn’t see him holding either one—he just saw how fast Démare was going, in close proximity to his team car.

The final problem with the case against Démare is that only two riders have come forward.  If Démare’s tow was as blatant as they say, how come nobody else seems to have seen it?  And how come no fans have come forward with smartphone video footage, when pretty much everything that ever happens anymore is filmed?  If, in a moment of weakness, I were to pick my nose and eat it right now, it’s a fair bet you’d see that video on the Internet within minutes.

One big problem I have with Démare’s professed innocence is that he hasn’t produced his power data.  Guesdon did say, “If there’s really a polemic about this, we’ll ask Arnaud to release his power files,” and “If this continues, that’s something we could do.”  Well, there have been four articles about this on cyclingnews alone, generating close to 200 comments so far … is that not a polemic?  So where are the files?

There’s also the matter of Démare’s response.  His language has been a bit wobbly; he’s said nothing so clear as “I did not hang on to my team car at any time” or “I did not have sex with that woman, Miss Lewinsky.”  He has said, “I have done nothing wrong” and, worse, “There are judges in cycling. If I had done something forbidden, I would have been disqualified.” His implicit premise here is that the enforcement of rules is perfect. This is a lot like the Lance Armstrong defense: “I’m the most tested athlete on the planet.”  Démare is conveniently dismissing the possibility that he could have gotten away with cheating, as if not getting caught is proof of innocence.  He’d sound a whole lot better saying, “I didn’t hold on to the car.”

He went on to say, “I sense a little jealousy from some of our rivals after our [i.e., FDJ’s] third place in the team time trial at Tirreno [Adriatico].”  Huh?  This is both a red herring (or “red lobster” as my daughter calls it) and an ad hominem fallacy.  You’d have to be a really, really sore loser to fabricate a story about a rider cheating just because his team got third in a TTT.  Capecchi’s Astana team was all the way down in 6th place, so by Démare’s logic Capecchi would have a vendetta against all 40 riders who beat his team in that race.  Tossato, meanwhile, didn’t even race Tirreno-Adriatico!  This is a pretty weak foundation for Démare to be building a revenge theory on.  I wish I spoke Chinese because I’m told they have a very concise, pithy expression that literally translates “You talk dog farts.”

Then there’s the matter of the Strava KOM.  I saw how fast the peloton went over the Cipressa, and how fast Giovanni Visconti (Movistar Team) was going when he attacked.  I pointed out how quickly Visconti and Ian Stannard (Team Sky) opened up a gap on the peloton.  So how is it that Démare not only went over the Cipressa faster than Visconti, but set a new Strava record in the process, after more than 250 kilometers of racing?  The whole point of the Cipressa is to shed some of the sprinters, who are notoriously challenged by such climbs … and here a pure sprinter sets a new all-time record?

Even more damning, of course, is the mysterious disappearance, and reappearance, of Démare’s Strava file for this race.  Let me guess … somebody hacked Démare’s Strava account because the password was something weak like “password123” or “TTTbronze”?  Or maybe Démare tripped, fell, and landed on the delete key?  Or did he remove the file because he didn’t want to rub people’s noses in the fact that he’d not only won Milan-San Remo but also got the Strava KOM on the Cipressa?

But to me, the most important bit of evidence is that, as acknowledged by his directeur sportif, Démare did take a bottle while climbing the Cipressa.  Why on earth would he do this, if not to take a tow?  Think about it.  You’ve just crashed at the base of a critical climb toward the end of a huge race, you’ve lost over 30 seconds, you know the peloton is already lighting it up ahead of you, and your only chance in the race is to climb like a bat out of hell and try to latch on.  Wouldn’t you be ditching your bottle, to save weight?  You wouldn’t be thinking, “My, I’m in a bit of a pickle, but that shouldn’t mean having to go without some refreshment later on.”

The only reason to take a bottle is to get dragged along a bit.  As far as I’m concerned, a tow is a tow, whether you’re holding onto the car window, a bottle, or your coach’s dick.  (Well, actually, that sounds really dangerous for the coach … but I digress.)

I’ve about had it with all this nonsense I’ve been reading about “sticky bottle” and how it’s just a wink-wink nudge-nudge part of the sport.  I’d never even seen the phrase “sticky bottle” before and now I see there’s even a website by that name, and all these fans saying that getting a tow via a bottle handoff is a widely tolerated part of the sport, to help out those poor unfortunate riders who took a spill and need to get back on.  I don’t care who tolerates it—it’s bullshit, particularly for somebody with designs on winning a major classic.  Asking for a bottle at that point in the race was premeditated cheating, and whether or not Démare deserves to be stripped of the victory, my verdict is that he’s douchebag.

My other verdict in the case is, who the hell cares?  It’s not like this is the first time a pro bike racer has done something douche-y.  It’s ridiculous how many fans have taken to the comments section on cyclingnews to debate Démare’s case back and forth, often attacking each other in the process.

Oh, and now you’re calling me a hypocrite!  Look, I’ve investigated this scandal for one purpose only:  to entertain.  I really couldn’t care less who likes Démare and who doesn’t, and whether or not anybody was swayed by my argument.  I wrote this to make you laugh, to make fun of Eros’s name, to put words in Guesdon’s mouth, and to speculate about how Démare’s Strava file got deleted. If I’ve failed to make you laugh, you can judge me on that basis, but please don’t assume I really care whether or not yet another bike racer cheated.  There are far more pressing debates to have about this sport … and watch these pages, because my next post will tackle a topic truly worth pondering and debating!