My older daughter, a high school junior, wants a car when she goes off to college. This is comical for two reasons: 1) she doesn’t even know where she’ll be going yet and thus whether a car would be appropriate, and 2) it’s not like you can just ask your parents for a car ... can you? Myself, I hate cars, so why would I give one to anybody?

When I was in college, I naturally rode my bike everywhere. (I didn’t get my first car until I’d been married for three years and my wife needed one.) At Berkeley, commuting by bike was (and is) serious business, with real traffic and real laws that are really enforced. But at UC Santa Barbara, where I spent my first two years of college, biking was just this big joke that everybody was in on. Just now I randomly stumbled across this article about biking at UCSB, which basically said, “Hey, kids, did you know you’re supposed to obey traffic laws?” The fact of this article attests to the lawlessness of the bike paths at UCSB. So does the following post, from my archives. 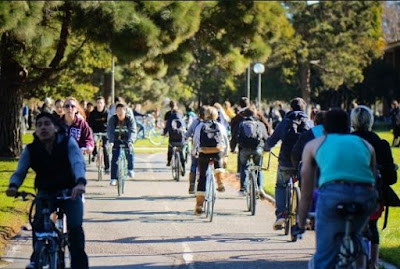 [You will note in the photo above, and others in this post, that nobody biking to class at UCSB wears a helmet. At least that was true when I was there. Wearing a helmet simply never occurred to us.]

Laugh all you want at the shocking tales you hear about the UCSB bike paths. Heck, I do too. But for those who lack eight years of bicycle racing experience, the daily traumas are no laughing matter, and the accident rate gets top billing in our campus newspapers. The other day, I rode along the bike path reading in the UCSB Generic that there were 212 bike accidents in the past year alone that required immediate medical attention. The article, which was incidentally one of the most poorly written I’ve ever read, began to offer a solution: “Lex Murray, bicycling instructor at UCSB, feels that common sense would...” There the article runs off the bottom of the page, and never picks up again. Dang.

I’ve found that one of the biggest hazards is the pedestrian contingent. If they wanted to be safe, they would never dare to use the crosswalks, but since they simply must cross over the bike path, they take their chances. The out-of-towners get it the worst, since in their complete ignorance of the bike situation they wander right into traffic and get hit. During my Freshman Orientation at UCSB, one of my group members was the victim of a high‑speed crash which wasn’t just entertaining, but also artistic, with the rider flying through the air like an acrobat.

Some pedestrians get so flustered at the crosswalks, they actually just close their eyes and walk across, praying to God that they don’t get hit. Perhaps more common are the people that look at an oncoming cyclist, check to see that he is paying attention, and arrogantly walk straight across his path, forcing the cyclist to slow down. (This is really stupid, since few bikes at UCSB have working brakes.) These boneheads are my favorite: whenever I detect that I’m being scanned like this, I accelerate and head straight for the guy, staring into his eyes like a lunatic. I have yet to lose my right‑of‑way (although when I finally do, it’ll be ugly). 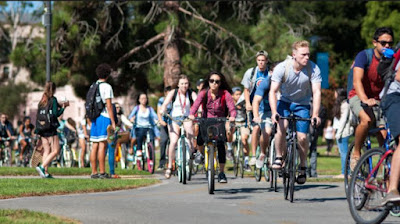 I think the most dangerous bicycle commuting factor at UCSB is lack of confidence. Allow me to illustrate just what kind of confidence I’m talking about. While exchanging war stories with friends from the cycling team, I described a crash I had a few years ago. Towards the end of a fast criterium in Denver, there was a big pileup. I thought I could squeak by it, but a guy ahead of me cut over into my path and my brake lever went right into one of his haunches. Flipping over my handlebars, I watched, with a strange sense of peace, almost a calmness, as the ground flew towards my face. I took the impact on my chin, splitting it open. At this point in my rendition of the story, one of my teammates asked me why I didn’t let go of the handlebars to catch myself on my hands. Realizing this guy was obviously a novice, a pal explained, “He still thought he could ride it out!”

Simply, the attitude a rider must take on the UCSB bike path, is this: “Nothing can crash me; I am invincible.” If you firmly believe this, then nobody will mess with you because they will know. To keep the rubber side down, riding defensively isn’t enough—you must ride offensively. And when things get sketchy, you cannot panic. You must absolutely refuse to go down—once you submit to fate, you’re a goner.

Your typical UCSB student tends to be pretty self-assured, even cocky, about his bike safety. Perhaps part of it is that he believes his body is as indestructible as his 40+ pound beach cruiser. It’s just a big game to him—which is good. I’ve had some close calls but my fellow students seldom panic. The other guy might simply ignore that we’ve locked handlebars, or he’ll find amusement in our mutual fight for control. Occasionally, he’ll say something witty like, “Whoa, dude!”

I have identified two things that make the UCSB bike paths particularly tricky. One is that there are these roundabouts that nobody knows how to negotiate. Students here bike between classes pretty much on autopilot, which normally works fine, but then you reach a roundabout and are yanked out of your mental haze because it suddenly seems like bikes are coming at you from every direction. 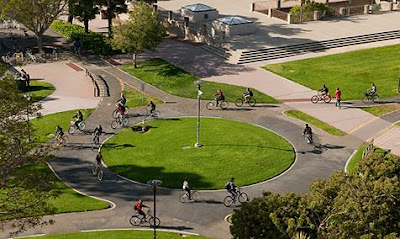 The other problem is congestion. You don’t see too much of this between classes, or even right before a class starts, because nobody here worries much about getting to class on time. But as soon as a class period ends, everyone is out of that lecture hall like a shot, students pouring out of buildings and mounting their bikes. The next five or ten minutes are total gridlock, but without the reduction in speed or observance of safe distance motorists give one another. After all, we’re all on bikes so nobody can get hurt, right? 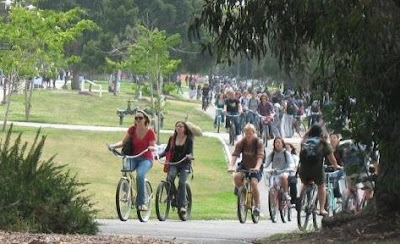 Just the other day I found myself in the midst of a bike path nightmare. Somehow, about ten of us got suddenly crammed into the space that only one or two bikes could safely occupy. To make matters worse, I was travelling about ten miles per hour faster than anybody else (and we were all cruising). Tapping into my mountain biking skills, I squeezed my bike handlebars, which are about 28 inches wide, through an opening about 18 inches wide by putting one half of the handlebar through at a time. Had anyone panicked, we all would have been history. Instead, there was a collective burst of laughter.

But not everyone is so sanguine. Some students recognize the danger; panic; and succumb. I will sometimes see two riders on a collision course panic five feet from impact, close their eyes, and scream, and my immediate reaction is, “What a cop‑out! They didn’t even try!” Once things get out of hand, these riders just submit. That probably causes most of their crashes.

Why, just today I was coming out of the Phelps Hall parking lot, and two girls coming in the other direction thought they were going to hit me and panicked. They shrieked and almost crashed into each other. Meanwhile, I calmly held my line and they missed me by a good ten inches. Not half a second later, as I turned onto the bike path, another biker cut the corner to the inside and we really were destined for collision. A natural instinct here would be to throw up your hands to protect your face, which would be carnage. But I resisted the impulse based on my special training. I hit the brakes hard. Mafac cantilevers in the front, coupled with a Shimano U‑brake in the rear, really carried the day and I averted disaster by stopping on a dime. The other rider, totally freaked out, flew off in a skew direction. (If I had been cutting the turn to the inside like that, I would have expected near disaster and not lost my cool like that.) As I pulled away, shaking my head, another guy gave me a knowing look, as if to say—what? I don’t know for sure. But something profound. 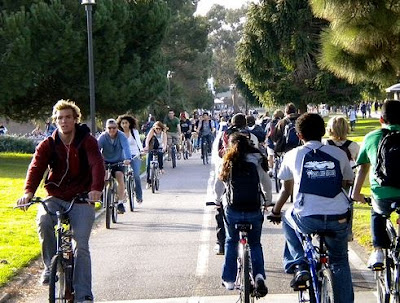 Now, all this being said, it’s possible to be too confident. And that’s exactly what led to what my friends and I now call “the Gump Incident.” My friend John was the perp/victim. He was riding along no-handed, reading the school paper, not a care in the world, minding his own business, not bothering anybody, when all of a sudden, out of the blue, for no apparent reason, with no provocation whatsoever (this is all a standard preamble when describing a bike accident), this fricking parked car appears out of nowhere! I mean, one second he’s just riding along, and the next second he’s plowing right into the back of this car! And it’s like, what was that car even doing there, other than sitting next to the curb being parked? The audacity!

Now, there are a couple of things to keep in mind about the Gump Incident. First, it didn’t technically happen on the bike path; it was on Pardall Road, an Isla Vista street that the bike path empties onto, so perhaps a slight increase in caution would have been wise. Second, it could have happened to any of us, because sometimes you get engrossed in an article and don’t really realize that you’ve left the bike path and are in the street. So when my friends and I refer to the Gump Incident, it’s affectionately, not pejoratively.

Now I know just what you’re thinking. “That Dana, he’s a cocky one, and he’ll get his, just you wait.” Yeah, yeah, of course you’re right; deep down inside, I know there’s a Huffy or Schwinn out there with my name on it. And when I do go down, it’s gonna be incredible to behold. First there’ll be an ear-splitting squeal as I lock up my rear wheel and my Tioga City‑Slicker lays down a rubber road. Then you’ll hear something like “LOOK OUT, GEORGE!” (even though there’s no specific reason to suspect the other biker will think I’m named George). Then the screams of onlookers will almost drown out the krunking of mangled metal as Deore XT meets Schwinn-Approved in something like a bizarre ad hoc metallurgical experiment. You may hear my jeans or shorts rip as they’re dragged across a spiky bit of bike, but if bare flesh meets metal the carnage might be silent, like a carpenter’s rasp zipping up curls of soft pine. You may hear me yell, “You BASTARD!” just before riders and bikes alike are consumed in a six‑foot fireball that will send shards of molten metal and rubber flying for hundreds of yards. Jaws will drop, beautiful girls will sob, and an early dusk will come over Santa Barbara as the mushroom cloud slowly climbs and grows and smears out the sky.

Until then, I’ll continue to ride like a man possessed. After all, this is a way of life here at UCSB.