Please don’t read this aloud to a small child. And now that you’ve stopped reading aloud, I can tell you why: I don’t want to spoil anybody’s belief in Santa. In this post I describe the Christmas Eve doldrums, a way I tried to deal with them, and my heart-to-heart with my teenage daughters about the Santa myth.

I mean doldrums in both senses: the general idea of stagnation & depression, and also the equatorial region of the Atlantic Ocean with calms, sudden storms, and light unpredictable winds. What I mean is that the holiday season is kind of like monsoon season, or what we might now call hurricane season. Going shopping for presents is, to me, like deliberately heading into a storm. And though I enjoy the slowdown at work that comes with the holidays, I also find myself feeling overwhelmed by the socializing, the music, and (above all else) the retail cyclone we get whirled into.

Of course Christmas Eve night is the hardest of all ... it’s when I have to wrap the rest of the presents, including each and every item that goes into each kid’s stocking. My wife thought I was crazy to do this when we started doing Christmas stockings for our kids. My rationale was that my parents always wrapped each stocking item, so I ought to continue the tradition. I now realize that my wife was right: I am crazy, and so were my parents. But I’m kind of stuck with the tradition.

Perhaps it was in anticipation of this onslaught that one year my mom went off by herself on Christmas Eve and watched Billy the Kid, the 1938 ballet written by Aaron Copeland, on TV. (This was our piece-of-crap black-and-white Panasonic.) To me this seemed an incomprehensible act. I was like, What does Billy the Kid have to do with Christmas? And moreover, what does watching TV have to do with us kids, on the night before Christmas? I interrogated my mom about this and she replied, “Sssh—just watch.” So I watched for like twenty minutes, half-expecting Santa to burst out on the scene, and when it became apparent he wasn’t going to show, I got bored and wandered off. Now I can relate to my mom’s desire to do something normal, non-child-centric, and non-holiday-themed with her Christmas Eve, before all the tumult of Christmas Day.

My wife and I are similarly stalling this evening. I’m blogging, obviously, but even before that we were AWOL from holiday activities. My wife sought the sanctuary of our bedroom (which, as a Christmas gift staging area, is off limits to the kids this weekend) to read a P.G. Wodehouse novel. I took to my home office to research a mystery that arrived in my e-mail earlier in the evening. The mystery is: what is the meaning of this painting? 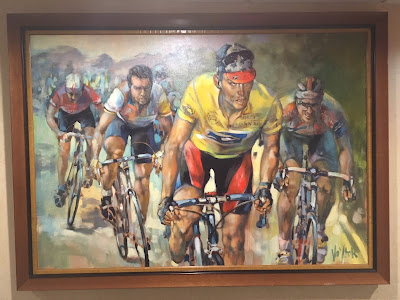 My friend’s e-mail read, “We’re stranded at a holiday inn in silverthorne, co, because i70 is closed. This painting is in the lobby.”

Now, in case you don’t follow cycling, this painting has a very strange characteristic: it features two (possibly three) Tour de France champions in head-to-head competition despite the fact that they raced during different eras. Bernard Hinault, the second rider from the left, raced his last Tour in 1986. The rider in the lead, Lance Armstrong, didn’t wear the yellow leader’s jersey (featured here) until 1999. 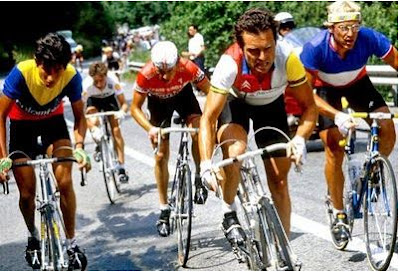 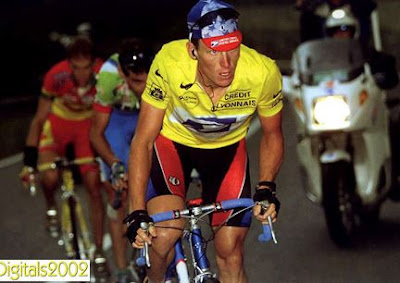 The artist has replaced Fernando Escartin with Hinault, and took that dude in the red jersey and white cap along with him. And he swapped out Laurent Fignon for Miguel Indurain. (At least, I think the rider on the far right in the painting is Indurain. This would still be anachronistic; Indurain did overlap with Hinault by a couple of years, but didn’t finish either of those Tours and certainly wouldn’t have been near the front during a mountain stage. It’s also possible this rider is Alex Zülle, who made the podium with Lance in 1999. The painting isn’t good enough to know for sure.)

Why would the artist juxtapose Lance with Hinault? Was he or she making a statement about these being champions of similar caliber?

It could be. On the other hand, maybe this artist just had a couple (or a pile) of photos to work from, knew and cared little about who else (besides Lance) had raced a bike, and painted whatever he or she felt like. (It’s surprising to me how careless people can be. I saw a bike catalog once where the photographer had accidentally—or based on some aesthetic preference—flipped the photo so it was a mirror image, and the bike’s drivetrain was on the wrong side.)

It dawned on me that the artist might think he or she was being funny. “Wouldn’t that be great if, like, Lance and Bernie had raced at the same time?” This made me think of the silly painting—a takeoff on a more famous one,“Nighthawks”—featuring a similar character substitution. 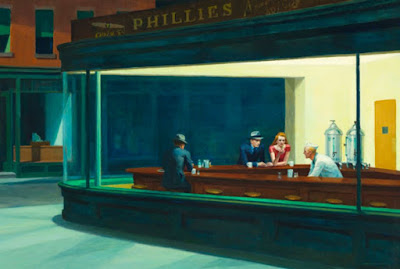 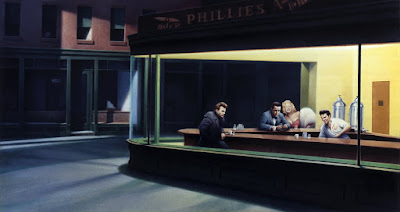 “Wow, wouldn’t that be awesome for Bogie, Marilyn, Elvis, and James Dean to be, like, hanging out together?” Seems like a pretty thin idea to base a serious artwork on, but there you have it. I wonder: did this artist whose work graces the Holiday Inn in Silverthorne take himself or herself seriously? And did the manager of the Holiday Inn? And are these one and the same person?

Then I remembered this Miyata calendar I had back in like 1981 that featured paintings of riders on the Capri Sonne team, riding Team  Miyata bicycles. Each painting was taken from some cool old photo, with the focal point of the photo (usually somebody like Eddy Merckx) swapped out for a Capri Sonne rider. I started researching this calendar, which led to the kind of pointless time suck the Internet is famous for, and this dragged me ever farther in to the Christmas Eve doldrums. I couldn’t keep with it.

Besides, my kids were still up so I had to set a good example. Watching a classic opera on PBS is one thing, but browsing Internet photos is another entirely. So I decided to do something with my kids. We took a walk through the neighborhood to look at the candle-aria. At least, that’s what I thought it was called. My kids laughed in my face and corrected me: it’s luminaria. You know, the votives inside paper bags that line the sidewalks in some lucky neighborhoods (such as mine): 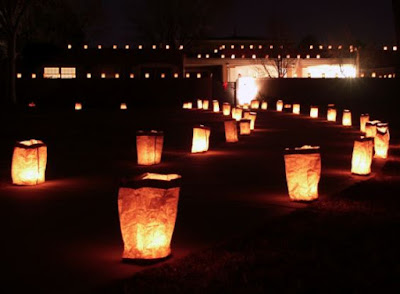 During the walk I decided, suddenly, it was time to have the uncomfortable conversation with my kids about Santa. “Alexa,” I said, “you do know there’s no Santa ... right?” She gasped in disbelief. “Dad!” she protested, “I’m sixteen years old!”

Ha! Once again my deadpan delivery fooled her. I love doing this with my kid. She falls for my facetiousness—hook, line, and sinker—every time. But I was curious to know: how long had she believed in Santa?

“Well, I guess until I was about eight,” she said. “It just seemed impossible to me that he could make it to every house in the world in so short a time. So I started comparing notes with my friends, and we all kind of concluded at the same time that Santa wasn’t real. Of course we played along to keep getting the presents.”

I asked my younger daughter. “Well, I’m not sure I ever really believed there was a Santa,” she said. “I guess I thought it went from person to person, that anybody could be Santa who wanted to give you gifts.”

I replied, “So when you and your sister left cookies for Santa, who did you think ate them? Me?” She said, “Well, no ... I guess I didn’t really think it through.” This is probably a good thing. It might have been troubling for her to think of some prowler sneaking into our home, eating these cookies, and leaving a bunch of presents.

I’ve written before, in my holiday newsletter and in these pages, about how if you spill the beans about Santa, then the Tooth Fairy myth is suddenly in great jeopardy, and we need that myth in order to keep our kids’ spirits up when it comes to losing a tooth, having blood in their mouths, and this weird tender hollow in their gums (often with a shred or two of loose flesh). I asked Alexa how long she had believed in the Tooth Fairy.

“I believed in the Tooth Fairy for about another year,” she admitted. “It just didn’t seem possible that you could get that tooth out from under my pillow without waking me. In fact, I did some tests where I put the tooth as far from the outer edge of my bed as possible, in a place you’d never be able to find, to see if I could catch you in the act.” I told her I remembered those times very well. It had been a pain in the ass. But I’m glad the seeming impossibility of my efforts extended the myth a bit longer.

(You may be wondering what Santa has to do with Lance Armstrong. Well, a friend of mine did a bike fitting for Robin Williams around the time Lance admitted to all his doping, and my friend asked Williams what he thought about it. Williams—who was a good friend of Lance’s—replied, “I was devastated. It was like when I was a kid and I learned there was no Santa.” This begs a question: did Williams really believe in Lance all that time, or was this a bit like Lindsay’s position on Santa: deciding not to think too hard about it? And how many others among us might have similarly suspended our skepticism?)

After the candle-aria—er, luminaria—walk, I felt the Christmas Eve doldrums lifting somewhat. I’d found this candid conversation with my kids heartening somehow; it’s nice to see that we can honor traditions like Christmas stockings while acknowledging the fiction involved and having a chuckle together. And it gives me hope that there will be a time, perhaps not too far from now, when I can slack off a bit on the stockings without ruining anybody’s childhood. But for now, I better post this little essay and get on with my night ... I have a lot of gift wrapping ahead of me.