This isn’t actually a post for morons. I thought the title would be funny, and “[Learnable Skill] for Dummies” is copyrighted. This is a shortcut to reading The South Beach Diet, and also a memoir of my weight loss efforts, but mainly a humor piece (because struggling with one’s weight is always funny, right?). Do not come here for an accurate, responsible distillation of the actual South Beach approach (which would be plagiarism and copyright infringement anyway). Call it Sloth Bleach Pseudo-Dieting(-ish). Okay?

Eight years ago in these pages, I wrote about “secondhand dieting”—whereby you end up on your spouse’s diet because he or she is doing the cooking. My goal when I wrote that was to get off the South Beach diet because I was actually perfectly happy with my weight. Well, fast-forward to last July and you’ll see, here, that as middle age has descended upon me, I am no longer happy with my weight—or, more specifically, with my belly. Toward the end of my “Ode on a Belly – Mine” post I declared my intention to do South Beach(-ish) for real, and to blog about the results. Well, here you go.

The good news is, Sloth Bleach really works! When I started it, after my nephew’s wedding (and associated festivities) in late June, I weighed a whopping 193 pounds. I began recording everything I ate, and began eating very carefully, and a month later—just in time for an epic bike ride with my friends —I had lost 12 pounds and was down to 181. Success! I got down to 175 by the beginning of September and held this until the second week of October.

The bad news is, South Beach isn’t really a diet. If it were, it wouldn’t work, because diets never do. Why not? Because they can’t. It’s absurd to think that you could temporarily change your behavior and enjoy permanent benefits.

Let’s look at the logic, or lack thereof, that the dieting concept implies:
Look, if you’re eating the way you always have, and yet you’re gaining weight, something has changed. Perhaps you’re not as active. Perhaps this is just part of getting old. Perhaps it only seems like you’re eating the way you always have, but you’re actually fighting the tribulations of middle age, parenting, and/or the working grind by self-medicating with extra booze, extra butter, or extra sloth. Whatever the case, it is impossible to implement a short-term fix to lose the weight (i.e., go on a diet and expect lasting success).

South Beach is not a diet, it’s an approach. It’s a permanent change in the style of eating that you do, that will yield permanent weight loss results if and only if you stick with it for the rest of your life—which notion is, I’ll admit, depressing as hell. But then, so is ongoing weight gain.

In case you’re hoping these caveats are theoretical, they’re not. I fell off the South Beach wagon because I started taking trips to my hometown to take care of my ailing father, then to help with his hospice, and then to spread his ashes. In order to cope, I ate breathtaking amounts of food, Beck’sted copiously, and allowed myself to eschew exercise entirely. The result is that I gained back half the weight I’d lost through South Beach.

(What do I mean by breathtaking amounts of food? Well, for one thing, my brothers and I would eat indulgent meals out such as all-u-can-eat pasta, and for another, we tended—almost without fail—to eat a pint of ice cream apiece, every night. Or to be precise, four quarter-pints.) 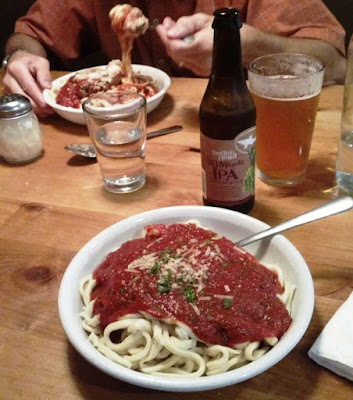 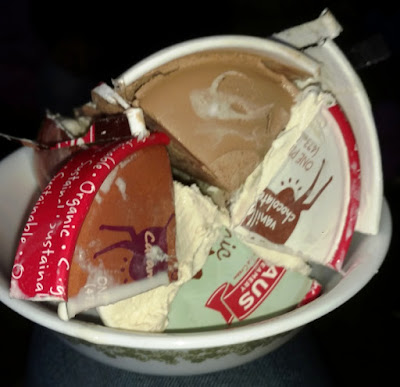 So, yeah—my South Beach effort had yielded weight loss results only while I stuck with it. Recently I found myself back up to the mid-180s. Something had to be done, so I resolved recently to sign up for the San Bruno Mountain Hill Climb bike race on January 1, to force me to adopt South Beach again. (Fear of disgrace is a great motivator.)

By the way, you may be aware that for years I’ve professed that the real key to staying skinny is to be a long-distance cyclist. I still hold this to be true, but with two caveats: 1) I can’t exactly advocate that for the lay reader because it takes a lot of time and it’s best to start young, and 2) I myself, despite gobs of muscle memory, don’t have the time and/or opportunity for that anymore.

I’ll bet you’re expecting me to say being overweight is ugly. Well, I won’t. It’s being old that’s ugly. No it’s not—I’m just playing with you. This whole thing isn’t about looks. It’s about health. Being healthy and fit happens to look better than being unhealthy and overweight, but that’s incidental. I used the heading “The ugly” above simply because The Good, The Bad, and The Ugly. I mean, duh!

It’s easier to change your behavior—especially in a way that involves reducing creature comforts—when you have a buddy along. Here’s how the logic of that works.
The argument isn’t perfect, because eating the South Beach way isn’t a miserable experience, exactly, but I doubt anybody would deny that having friends involved in your effort will help.

My wife, supportive as ever, agreed to do South Beach(-ish) with me. So did my brother Bryan, who isn’t doing an all-uphill bike race on January 1 but wants to lose weight anyway. This is only partly because I made fun of his belly when we were in Boulder together. “OMG,” you’re thinking, “you actually made fun of somebody because of his weight? What kind of monster are you?” The answer is, a sibling. Bryan made fun of my weight too, decades ago (when, at age 6 or 8, I had an oddly big belly). The chickens have come home to roost! But again, that’s only part of it. Bryan wants to be heathier, and we’re talking about doing a grueling 108-mile bike race, over giant Alpine passes, in a summer or two, so he appreciates my encouragement (even when it takes the form of taunts and jeers).

Where South Beach is concerned, the buddy system consists of sharing snippets of your daily journal, where you record not only what you eat but what you weigh each morning. So it’s not just a matter of providing encouragement, but also holding one another (and yourself) accountable. If a little bit of rivalry finds its way in there, well so be it. After all, that can be motivational, too.

In the case of my brother, the buddy system also means explaining how South Beach works—i.e., what you can and cannot eat. In case you’re intrigued by this miracle weight loss plan (which phrase I use here quite deliberately, to help Google direct people to this blog), I’m going to share my quickie, just-the-gist South Beach(-ish) wisdom with you as well.

How this thing works

South Beach is divided into phases. During Phase 1, you can’t have any fun at all—no bread, no pasta, and in fact no starches at all really, just lots of veggies and maybe some really unappealing whole grains like quinoa or something. The point is to get some immediate results, so as to motivate yourself. (Full disclosure: I don’t have the chutzpah to do Phase 1. If you think you do, maybe you should get the actual South Beach book.)

After a couple weeks on Phase 1, the plan goes, you move to Phase 2, which lets you have a few indulgences, but is still fairly austere. You do that for—what, a couple more weeks?—and then move to the third, final, permanent phase, which is—you guessed it!—phase 3. (Wow, you’re a quick study!) This final phase lasts either forever, or until your resolve flags.

More important than these phases is the emphasis on filling up on veggies instead of starches. The principle, as I understand it, is simple: we didn’t evolve to eat refined stuff like flour and sugar. That stuff is too calorically dense for us, especially since we’re not doing much physical labor anymore. (If this sounds like the Paleo diet, that’s a coincidence, since I know essentially nothing about it except that it’s probably annoying.)

Long story short, you essentially need to serve up all kinds of bulky, low-caloric, simple foods like vegetables, and fill your gaping gut with those instead of the tasty stuff. By “tasty” I mean “foodstuffs that have been manipulated to be more tasty.” (Obviously if we’re talking about all things that taste good, we should include fruit, vegetables, and other naturally tasty things, but the fact is, most people have forever thrown those over for highly manipulated crap like sugary cereal, “chicken” McNuggets, pasta, pizza, fries, etc. and I’m not going to pretend otherwise.)

So South Beach is way to reconcile what our bodies really need with what we feel like we need. We sorry humans have this pathetic need to feel full, because we’re so used to this feeling and because our souls are empty. And it’s actually okay to feel full, but only if it’s because a lot of high-fiber, low-calorie stuff is pushing against the inner wall of our bellies. We leave the table feeling sated, or at least bored of eating, and our overall calorie intake goes down.

In response, our bodies relearn how to burn fat efficiently. Meanwhile, our blood sugar becomes more stable. We snack less, eat better calories, enjoy all the benefits of the vegetables and meats we evolved to draw nourishment from, and become healthier. With our newfound health, we can cheat here and there and enjoy pasta again—because without pasta, life simply isn’t worth living. Obviously.

Some rules of thumb
So how’s it working out?

My brother e-mailed me a few days into our SB effort and said, “Thanks for the good tips! I'm inspired, truly. I started a food log of my own, and you’re right, Dana, just writing down what I had for dinner last night filled me with shame.” See? It’s working!

Just like I didn’t want to overwhelm my brother with arcane nutritional lore in our first few days of Sloth Bleach, I think it’s time to let you come up for air. Go watch a really dippy romantic comedy now, or wash your hair, or drink a beer, or whatever it is you do to release the viselike grip my relentless text has surely had on your poor head. And tune in next week for more inspiration; delicious, gossip-like updates on my brother’s and my progress (or frustration); and more useful information, including quick and easy lo-cal recipes like Mexican(-ish) rice and roasted Ewok!