If my use of the word “Christmas” (as opposed to “the holidays”) causes you to raise an eyebrow, please read the “semantic housekeeping” section of my last post.

Let’s face it, there’s gobs of Christmas music out there but it’s slim pickings finding anything even listenable, much less good. As described here, I cannot stand how malls immerse us in this godawful noise. But if you look hard enough, there are a couple of really good holiday songs. (Perhaps exactly two.)

I’ll start with the runner-up, that being “7 O’Clock News/Silent Night” by Simon & Garfunkel. For one thing, those guys can actually sing. Where other name-brand musicians try to breathe new life into stupid old songs like “Santa Claus is Coming to Town” by randomly warping their voices, to give the song an unstructured “live” sound, S&G sing this classic song beautifully and in harmony. Meanwhile, they fold in a grim radio announcer reading the evening news, which grows steadily in volume and bleakness. This combination has a bite that no other holiday music would dare attempt. Perhaps the only fault is that the irony is just a bit too thick … it’s fine line between timeless music and a parlor trick.

The winner in this category is “Realness of Space” by Bob Schneider. You may cry foul because this is not obviously a Christmas song. In fact, you might argue that this is obviously not a Christmas song. Well, subtlety is sometimes what makes great art. If you listen to this song a number of times you’ll realize that its underlying structure resembles, more than anything, a Christmas gift list. In the span of just over two minutes, Schneider utters the phrase “I want” no fewer than 21 times. And the real giveaway is when he sings, “I want a gold watch/ I want some Hickory Farms.” Let’s face it, nobody ever even thinks about Hickory Farms except around Christmastime. 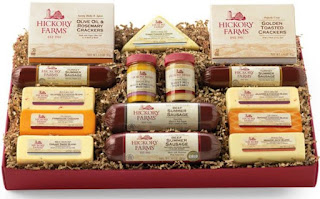 To put this theory to the test, I asked my wife if her family ever got a Hickory Farms gift basket. She said, “Yeah, for Christmas some relative would always give us this giant cheese ball. It was kind of weird, just this big old ball of cheese encrusted with nuts. As a little kid I was kind of fascinated.”

My family wasn’t actually lucky enough to get anything from Hickory Farms, other than their Christmas gift catalog. I would leaf through that with a combination of desire and mild disgust. Of course I loved cheeses and peanut brittle, but the giant sausages—which appeared to be at least four inches in diameter—struck me as grotesque, almost obscene. (My mom was known, on burger night, to stretch a pound of ground turkey with oatmeal so it would feed our family of six, including four ravenous boys.)

What makes “Realness of Space” profound is the chorus: “I want the Jacksons from 1973/ I want the Osmonds, and I/ Want you to love me.” When looking to summon something that is gone forever, the very quintessence of the unobtainable, you couldn’t do much better than this (the Jackson 5 having split up that year, and The Osmonds not long after). It’s as though by gathering together these things he cannot have and juxtaposing them with what he really wants—love—he’s tormenting himself as masochistically as Edgar Allen Poe does in “The Raven.” And what could capture the dark, lonely side of Christmas better than that?

(Sure, you may continue to claim that “Realness of Space” has absolutely nothing to do with Christmas, and you know what? That’s totally fine. Go write your own blog.)

Look, I get that nobody reads poetry, and that almost any reader would have no use for this category in a Christmas guide. It’s not like we’re all going to go write poems for our loved ones, or read published poems to them, or anything like that. If you think maybe I’ve gone off the rails, well, you’re probably right. Christmas does that to me, okay? But actually, one of the greatest tributes to Christmas ever created happens to be a poem.

I’m talking about “King John’s Christmas” by A.A. Milne. It concerns a king (or perhaps a man who deludes himself into thinking he is) who gets no respect—men passing him on the street would give him “a supercilious stare,/ Or passed with noses in the air.” King John has no friends, and “The cards upon his shelf/ Which wished him lots of Christmas cheer/ And fortune in the coming year/ Were never from his near or dear/ But only from himself.”

But John won’t give in to despondency, and gamely writes out a letter to Father Christmas:

I want some crackers,
And I want some candy;
I think a box of chocolates
Would come in handy;
I don't mind oranges,
I do like nuts!
And I SHOULD like a pocket-knife
That really cuts.
And, oh! Father Christmas, if you love me at all,
Bring me a big, red india-rubber ball!

Lying awake during the wee hours of Christmas morning, John thinks he hears Father Christmas up on the roof, and gets so excited about getting anything at all (“He’ll bring one present, anyhow— / The first I’ve had for years”) that he rescinds all his requests, except for the last one. I won’t tell you what happens next … just go read the poem.

It would be almost impossible to discover the very worst of the modern, name-brand covers of insipid traditional Christmas songs, because that would mean deliberately wading into the cesspool that is this genre. I wouldn’t wish that on any critic or blogger. Perhaps somebody working in a mall might inadvertently become an authority on the matter, but I’d hate to draw him or her out on the topic outside of working hours. Haven’t these people suffered enough?

Perhaps the best I can do is present the most disappointing, wince-inducing exhibit in the canon: “2000 Miles” by The Pretenders. I suppose it’s possible the band thought they were making real music, but my suspicion is that this is one of the bigger sellouts of all time—a cynical, shameless ploy to get their music into the malls. I mean, why else would a rock band make a Christmas song?

The song is monotonous, and Chrissie Hynde’s voice sounds a bit whiny, and the lyrics are abysmal. The observation is made that 2,000 miles is “very far.” Yeah, no shit! Then we’re regaled with a Thomas-Kindade-esque sentiment: “Our hearts were singing/ It felt like Christmas time.” Awwwww. It wraps up, “I hear people singing./ It must be Christmas time.” Who doesn’t know already when it’s Christmas time? Are we supposed to be moved by this deduction?

Even Hynde, who wrote the song, admits her lyrics suck. According to Wikipedia, she once declared, “Robbie McIntosh plays beautifully on ‘2000 Miles.’ Anything to avoid listening to my voice and my stupid words.”

But the worst part about this song is how damn catchy it is. If I hear it on the radio, or some chance phrase brings it to mind (which isn’t at all unlikely at this time of year), it gets stuck in my head and just won’t leave. When I think about The Pretenders—a band I normally like—stooping this low, it just depresses me.

And that’s not even the end of it: predictably enough, a number of bands have done covers of this imbecilic song. Wikipedia lists 11 of these, many for (gasp!) Christmas-themed albums.

I can understand why a mall might play inoffensive holiday-themed music in order to instill the kind of retail trance that separates people from their money, but why would rock music fans have an appetite for this kind of pablum?  Ugh.

Nobody should be bagging on poetry, right? Shouldn’t I be supporting it in all its forms? Of course as a wannabe writer I should be forgiving of anything committed to the printed page in pursuit of art. And so I’m myself surprised at having anything to describe in this unlikely category. And yet I do.

Somehow, in “researching” this post I stumbled upon a poetry website, PoemHunter.com, that does something—in the name of poetry—so utterly tasteless I cannot begin to fathom its origin. It presents poems (a strange mix of classics and amateur efforts) alongside not just a whole bunch of ads, but below what I guess it calls a video. It’s a little window with the words of the poem printed (like a Karaoke screen) and a computer voice doing an exceptionally poor job of reading the poem. The video, of course, is prefaced with a video ad. (The first poem video I viewed had an ad for fake wood siding for your home. I grabbed a snapshot and thought of pasting it below, but then that would technically be an ad on my blog which of course I would never do.)

Here is an example of this audiovisual monstrosity. Who the hell would want to hear that? It’s tempting to think this website is catering to the deaf, but then why would there be all the visual ads? I guess the Poem Hunter creators figure there are people who are so lazy they’d rather hear a robot voice absolutely butcher a poem than do the reading for themselves. I truly hope nobody is so lonely during the holidays that he or she would listen to a Christmas poem on this site, just to get the simulacrum of another human voice.

I read the “About Us” section of the website, and found it decidedly non-erudite: “PoemHunter.Com aims to spread the effects of poems in the social and individual life of people, where a continuous change is undergoing with the Internet. PoemHunter.Com without a pause, continues its activities with the active participation of thousands of members.” My favorite part is the grammatically incorrect pause-inducing comma right after the phrase “without a pause.”

Yeah, I know that lousy website isn’t really Christmas-themed, per se. What can I say? I’m just not that devoted to this topic ... even with the big day only a week away.