For over a decade, every year I held a year-long bike training contest with my brothers Bryan and Geoff, and sometimes a few friends. It started January 1 and ended December 31 and was a points competition. We didn’t race head-to-head, nor did we compare times (like Strava does). Instead, we used the data from our heart rate monitors to score each ride in terms of duration and intensity.

(Here’s what these heart rate monitors looked like … fairly primitive by today’s standards, though they did offer data upload to a PC so we could crunch the numbers. Yes, that 39 on the screen is my heart rate … I was much fitter back then, and this was at rest.) 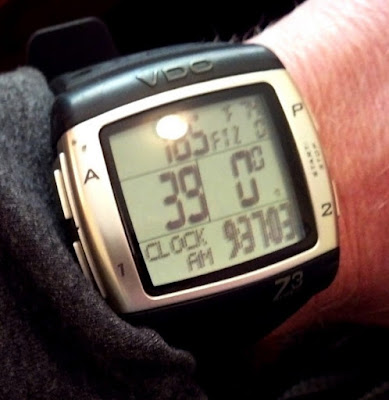 Intensity was determined by each rider’s average heart rate, and what percentage of his maximum heart rate this average represented. The closer to redline a guy rode, the higher his score was, based on an accelerator applied to his base score; i.e., total score =  [duration]*[avg HR]*[accelerator].

There was also a bonus based on the amount of time spent with the heart rate over the target zone (i.e., more than 85% of the max heart rate). This meant that whatever part of your ride was at absolute redline earned you big bonus points. In a nutshell, you scored high by hammering your ass off for as long and as hard as possible. (Downhills and other periods of low-intensity riding were chucked out by a special software algorithm Bryan coded.) So the real total score = [duration]*[avg HR]*[accelerator] + [bonus].

We tracked one another’s scores closely via a shared spreadsheet we would trade around via FTP. The score per month and running total were displayed graphically. We commented on each other’s rides, cheering and jeering, and often going off into the weeds with stories of family life. Often we’d review and update the spreadsheet several times a day.

(Here’s a photo of Bryan, Geoff, and me taken in 2006, during a training ride for the 2006 La Marmotte cyclosportif.) 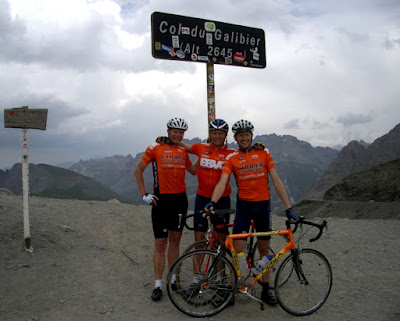 The contest of 2005 was particularly close, with the winner not determined until the final day, December 31. This meant we spent our Christmas and New Year’s Eve holidays pedaling like madmen. It’s a wonder our wives put up with it.

This post gathers up our scores and comments, with a pretty graph at the end, so you can read the amazing story of our end-of-year death march. (If you’re not that into bicycling, fear not: there are some great side stories about our kids barfing, which ought to pique anybody’s interest.)

A final note: Geoff lives in The Netherlands, so he’s nine hours ahead. This meant I sometimes knew his most recent score before I rode, but not always. Sometimes we didn’t update our scores right away (either due to time constraints or a backhanded keep-‘em-guessing strategy).

DANA:  (14.1 points – 1 hr 21 min, 21 miles, 2,913 vertical feet of climbing): Doggone it! I didn’t see a score for you as of this afternoon, and thought maybe you’d taken the day off. So I went out and hammered (as well as I could, anyway), thinking I’d be padding my lead. Instead, I lost it! I just didn’t have it today … too many hard rides already this month!

I’m going to have a hard time putting up the big scores this week because I can no longer ride indoors. We’re having the kitchen painted, and though the painters put up a plastic sheet, it’s been punched full of holes, and the fumes have filled the office [where I ride the trainer]. I considered riding with a gas mask down there but that would get mighty gross. So I rode in the rain today. What a mess. My chamois was like a thick soggy pancake by the end, and my socks weighed a pound apiece. To dry out my shoes, I stuffed inside-out diapers in them (for lack of newspaper). It’s supposed to keep raining, so this next week will be a real test of my gumption! And I’ll be in Sacramento for Christmas so I won’t get any riding done…

[SITUATION: GEOFF AHEAD BY 19 POINTS]

DANA (17.2 points – 1 hr 23 min, 21 mi, 2,976 vertical feet):  D’oh! We didn’t get back from Sac until this afternoon. I’d hoped for a longer ride but simply ran out of daylight. Man, I can see the contest slipping through my fingers! I live in fear of the next Geoff Albert MegaScore. And I didn’t even get the lead back today!

[SITUATION: GEOFF AHEAD BY 2 POINTS]

GEOFF (32.6 points – indoor, 2 hr 1 min):  Well that was painful, but I’m pleased. Man. I was practically hyperventilating for the full two hours. It was one of those struggles to keep the pulse up. Thinking about the rest of the week is terrifying. Such pain, such misery. It will not be fun. If I weren’t such a coward I’d just throw in the towel and announce that I won’t be riding any more this year. But I can’t, of course.

BRYAN:  Well, Geoff, shoot, it looks like you’re poised to take away my score-per-month record and there’s nothing I can do about it. On the other hand, you’ve earned it!

DANA:  (7.2 points – 1 hr 34 min, 20.6 mi, 2,920 vertical feet): Nooooooooooo! This was just what I was afraid of. I suffer long and hard to eke out another tiny advantage, and then Geoff comes along and obliterates it. [Here, I did my ride before seeing Geoff’s score, so when I went to post mine, I saw right away that he had hugely outscored me.]

That does it. I’m going to play this like a numbers game. No more strategizing about how much rest to take to feel best on training day. I’m going to have to ride every day, on the off chance that I’ll feel good. If I feel lousy, I fall off the bike and drown my sorrows in my own sweat. If I feel good, I go as long and hard as I can. Trouble is, tomorrow is my last day of vacation and I doubt I’ll feel very good, if today is any indication. Man, I’ve been on the sofa most of the day, between loads of laundry. My legs feel like they’ve been actually injured, like somebody shut them in a car door. Man o man. I felt SO lousy on this ride. I had big ambitions, too. I ate breakfast, mixed up two big bottles of Gatorade, two Clif bars, clothes for any weather . . . I was going to ride for hours and get a shock-and-awe score. I figured I’d finished yesterday’s ride with something still in the tank and would feel good. The horror! I just didn’t have it. I felt slightly less than mediocre going up Spruce, fairly lousy on South Park, and absolutely abysmal on Lomas Cantadas. There were times on that climb when my bike would come almost to a complete stop at the top of the pedal stroke. I went from intending to conquer the world to simply hoping I could limp home. Even my arms were tired.

In other news, just before bed last night Lindsay had sudden, violent bout of projectile vomiting. Her aim was uncanny:  she sprayed down a large pile of silk sweaters, fanned her blast over to our goose down pillows, nailed the down comforter and duvet, coated a bunch of clothing, and created a huge slip hazard on the hardwood floor. Never has such a small person created such a huge amount of laundry in so little time. Plus we had the bedroom windows open due to the paint fumes, so without that comforter I froze the rest of the night. I dreamed that I was riding with soaking wet chamois and tights. D’oh.

BRYAN:  You’ve got to love those little vomiters! Last night at the dinner table (our family has been afflicted to varying degree with illness) Jamey announced that she felt like she was going to barf. So we told her to go to the bathroom. Then we heard her heaves—they sounded like those of a full-grown man! That little angel hit the toilet with every blast, and there were four of them! So we tucked her in with her bucket. Poor little fellow, with her sheet-white face...

Last night Lydia was complaining of some serious stomach problems and today she’s hurling hard. She even threw up out the window of her uncle’s car, spattering all down the side of the car! This was in heavy traffic, no less.

GEOFF:  Good grief! I’m counting myself very lucky that I haven’t had to clean up vomit in a while! The last time was when Max didn’t make it to the tiled bathroom in time, stopping mid-stride to empty his system on the brand new carpeting upstairs. I couldn’t help but grin as I was scraping it out with a spatula, just like Mom used to do. I don’t know how I got the vomit patrol task, but I did.

DANA:  Speaking of Max, I chatted with him the other day, international long-distance, and bragged that I ate roll-mops [raw herring wrapped around a dill pickle spear] as my recovery food after a cold, wet ride. I was bragging, of course, but he unknowingly deflated my wimpy American swagger instantly by asking, “Was it yummy?”  It hadn’t occurred to me that a food that gives one (wussy American) man culinary bragging rights can be another (cool European) man’s (well, boy’s) delicacy...

BRYAN (20.6 points – indoor, 1 hr 3 min):  I’ll take it. It won’t help much, but it was a good ride, all things considered. It sure hurt to ride the trainer. I had forgotten how much suffering and drudgery it is. In fact, I wondered for a few minutes why I’m even doing this…

DANA:  Not bad! Your score-per-hour is stellar, as always. Did John work out with you?

BRYAN:  Nope, just solo. I think he was feeling a bit ill and went to bed early. It was a late-night ride. Now I’m feeling sick too! My belly’s all queasy and I feel like I should be puking, but I’m not—yet. Fine by me, but I sure didn’t feel like mounting up last night. I was hoping to ride every day through 12/31, but it’s not going to happen.

GEOFF:  You know, I’m feeling a bit ill myself. My head’s heavy and hurts, like one of those colds coming on. Of course it sure doesn't help that I only got five hours of sleep last night…

DANA (30.4 points – 3 hours, 47 miles, 5,975 vertical feet):  Boy, this one hurt. I psyched myself up as much as possible first, reading a Tour de France book beforehand while waiting for my NoDoz to kick in. I achieved some good time-above-zone early on, by suffering hugely, and then about halfway through I started to fall apart. Man. I felt every pedal stroke today. Each one was so hard, I was able to count them. There were 14,387. Oh, such horrible suffering. Every climb the Berkeley hills can throw at a guy—South Park, Fish Ranch, Claremont, South Pinehurst, Pinehurst, El Toyonal, and Lomas Cantadas. I’m glad I took the lead, but of course it’s another of those ahead-by-a-hair deals that will certainly be crushed out like a cigarette tomorrow.

I was absolutely destroyed at the end of this ride. Erin saw me come in the door and gasped at my blue lips. (It wasn’t that cold out; I think it was the problem I had after the 2003 La Marmotte, when my body was having trouble reoxygenating.)  Boys, you know you’re hurting when you have to sit down in the shower.

BRYAN:  Remember how I was feeling sick, like I should be booting, but I wasn’t? Well, I guess it just took a little while to come on, but boy did it! It’s like a hydrant! Wet cleanup in aisle 3!

[SITUATION: DANA AHEAD BY 3.5 POINTS] 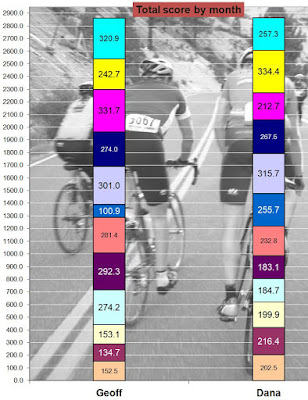 For the thrilling conclusion to this barbaric, ego-fueled struggle, tune in to Part II, coming to albertnet on December 31!