If you read my last post, you were left hanging, your interest (ideally) kindled about who ended up winning the 2005 Albert training competition. (If you didn’t read my last post go do that first.) This post provides the electrifying conclusion of the protracted, wrenching, ego-drenched battle between brothers. By way of review, the brothers in question are Bryan (at left in the photo below) and Geoff (at right). 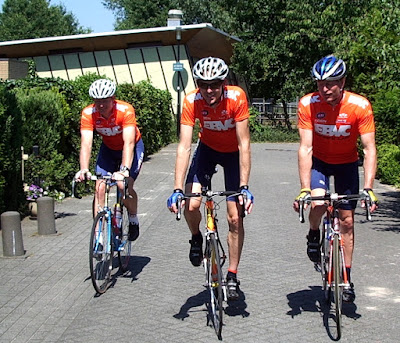 Where we left off, I led the competition—after 362 days—by a mere 3.5 points over Geoff. To emphasize how close this was, that’s just 0.12% of my total score to that point. Geoff and I were absolutely neck-and-neck, and both already fried from three brutal weeks on the bike.

GEOFF (before riding, and remember, he’s 9 hours ahead of Dana and Bryan): As I look over the [training competition] spreadsheet for inspiration, less than half an hour before I suit up for my final effort of the year, I feel a sense of doom, not unlike that feeling I had when Dad was going to spank the whole lot of us, and I was sent around to friends’ houses to round everyone up. I know I’m going to have to do great things here in the next few hours, and this causes my bowels to constrict with fear. I wonder what will happen... By the time you read this I’ll probably have posted my score. I hope it’s a big one.

GEOFF (42.0 points, indoor – 2 hrs 25 min): In an attempt to demoralize and crush the opposition, I have produced this score. I felt pretty good and decided to shoot for two hours above the [heart rate target] zone. After 1:45 above the zone, I just fell apart. I got off, caffeinated, drank apple juice, emptied my bladder and soaked my head, which got me through another turbulent five minutes, but then it just ended. My legs would go around in circles no longer. I threw in the towel and started cleaning up and warming down.

But then I decided to try again, as this is the end of the year, and climbed back onto the torture rack, made my best effort to turn the pedals around some more, but no, it just would not happen. I was knackered. Had the stuffing completely knocked out of me.

So there it is, 42 points. Dana, if you can top this effort, why, you deserve the win. Who knows though, maybe I’ll feel inspired on Saturday, and will get back on the bike. I doubt it though....

DANA: You bastard! I have no time to ride today and no energy anyway. But I’ve been checking the FTP site all day, waiting to see what you did, and fantasizing about a sub-30 score, the natural result of the fatigue that I hoped would finally catch up to you. But no, instead you get medieval on my heinie, you just shock-and-awe me, with this grotesquely monstrous score. You are a bad, bad man. D’oh. I’m already terribly dreading tomorrow’s hammerfest. It’ll be doubly painful given the obvious futility of my attempt...

[SITUATION: GEOFF AHEAD BY 38 POINTS]

[Here’s a photo from 2006, of the three of us studying our ride data together. We were data slaves long before Strava even existed.] 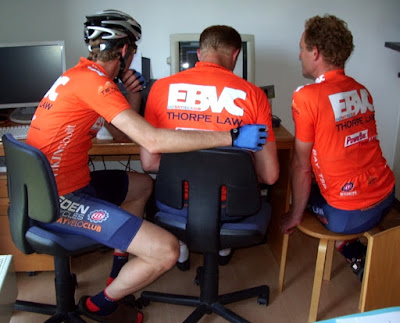 BRYAN [catching up from Thursday]: Man, Geoff! What in tarnation are you? The Terminator? Look at these scores! Look at the slope of that graph! Every stinkin’ ride is over 30 points! And getting back on after throwing in the towel, that’s heroic! But I happen to know that Dana’s out there right now, putting the hammer down, even as I sit here waiting for the next round of nausea and the next mad dash to the toolit to puke my guts out. I’m thinking Saturday’s calling your name... 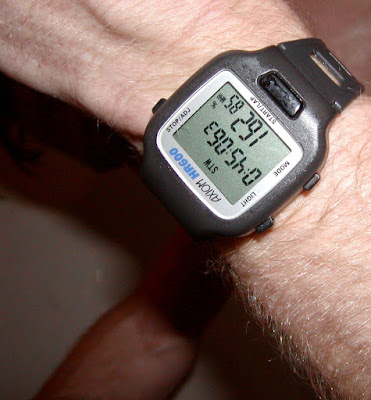 BRYAN: Good grief, the mother of all mother scores! Look at that score-per-hour number! Only two hours, and an hour and a half of it above the zone! Well, this is certainly going to be a battle. NICE RIDE, DUDE!

DANA: Thanks! I only wish it didn’t totally wreck me. At the dinner table afterward, I was almost too tired to chew. In fact, I became too tired to eat before I was really full. I just couldn’t stay vertical another minute, and collapsed to the floor on my back. Even typing this note is a serious chore.

GEOFF: Well shoot, you certainly are an ornery little cuss, aren’t you? Man, 40 points. Now of course I have no choice, I have to ride again. I only hope I can do something great. Man, nice effort! An ‘A’ for effort! Of course you’re going to dig deep tomorrow and I just know that you’re going to pull ahead again, and that on New Year’s Eve I’m going to have to make myself suffer again, and that it will be in vain. Oh well, I’ve never been so close to the victory before. I guess that’s worth something.

DANA: If you had any first-hand knowledge of how badly I suffered for these points, you wouldn’t be worried at all...

[SITUATION: DANA AHEAD BY 2 POINTS]

GEOFF (39.7 points, indoor – 2 hrs 12 min): Well there it is, my final effort. I somehow outdid myself. At the time, it felt as if I had given it all I had. Yet I didn’t fall off the bike. Nor did I have to crawl around afterwards, I was still able to walk. Shoot, my lips didn’t even turn blue. Now I’m feeling like such a wimp. Why oh why didn’t I stay on just another ten minutes? I could have shattered through the magical 40 Point Barrier.

Oh well, I guess I should be proud of myself. It was a near death experience, after all. At one point my eyes filled up with tears and overflowed for almost no reason. At another point my pulse sailed up above 160, where it stayed for what felt like an hour, though in reality it was only a few minutes. I was sure that I’d died and been relieved of my suffering, and decided that I’d stay on the bike for the rest of the year [i.e., until midnight]. Then of course my pulse plummeted again, and it was back to reality.

So there it is, almost 40 points. Will it be enough? Will age and treachery overcome youth and skill? Or will Dana pull it off yet again? We’ll soon know. The ball’s back in your court. Punish me, young man!

DANA (pre-ride): MAN! I’m so impressed, I can’t even bring myself to call you a bastard. That’s amazing! Look at that score-per-hour, right on the heels of your 42-point MegaTour! I’d also like to point out that you took the world record for score-per-month of all time, besting my 400.2 mark from 2003! You also got the second-biggest week of all time (second to your own record, of course). Now, I’m going to swing my leg over the bike today, but I can’t imagine I’ll have the strength to even begin to convince myself that victory is possible. You’ll know soon . . . perhaps very soon, if things go badly enough for me! Nice ride, dude!

DANA (10.6 points, indoor – 1 hr): Today’s ride was horrible, but at least it was brief. That is, it took me just an hour (actually 59:45, which was as close to an hour as I could get) to ascertain, beyond a shadow of a doubt, that there was no way I could score enough points to win. I’ve attached the final graph, because it tells a poignant tale. About 35 minutes into the workout, my spirits faltered and my pulse dropped to about 145. This angered me, and I hammered as hard as I could and finally crossed the [target] zone threshold. At this point I had all the grace of a fish flopping on the floor of a boat, being murdered with an ice pick. After about 90 seconds of this I was actually crying. I blew up, and my heart fell to just over 130.

I was getting ready to climb off the bike when I had my Tom Simpson moment. Remember, just before he died on Mount Ventoux, when his famous last words were “Put me back on my bike!”? That’s what I’m talking about. Reflecting on the absurdly short duration of my ride, and motivated by an equally absurd refusal to accept defeat, I decided to try to recover and go a bit longer.

And so, 48 minutes in I decided to try one more time to burst over the zone threshold, and (I foolishly hoped) somehow pin myself there [i.e., above my heart rate target zone—that is, redlined]. And as the graph shows, I actually did get it up there for awhile. When I finally detonated for good, which of course was inevitable, I decided to just keep hammering as much as I could despite the extreme, piercing, shattering pain. At this point I was uttering strange animal noises, somewhere between groans and screams but really more like yelps (given my lack of breath). And then something really strange happened: after maybe 30 seconds of this my heart rate began to soar. It got into the upper 160s and stayed there awhile, for about 45 seconds, and then suddenly I not only couldn’t pedal anymore, but couldn’t hold myself up on the bike. I crumpled into the handlebars and it was all over. Good thing I was on the [indoor] trainer or I’d have stacked!

So, not a great score, but it did get me above the 100-points-in-a-week barrier, for a personal best. It also got me above the prestigious 300-points-in-a-month barrier. It also brought my margin of loss down to less than a percent, which I have to be happy about. Best of all, it’s finally over.

BRYAN: Well shoot, Dana, my condolences. It was a valiant effort, I must say, as your last ride’s data attest. I believe you’re the better man for it, however, and I fear what you will do in the coming year. Did you realize that you shattered your previous total scores, as well as your best week? Very impressive...

GEOFF: Well Dana, your description of your final ride has filled my head with all sorts of thoughts. First of all, there’s respect and admiration for your grit and determination and your ability to torture yourself. My hat’s off to you! Then of course there’s the enormous sense of relief that you didn’t actually die trying. Erin would have killed me! There’s also the recognition of having been right there with you, having experienced exactly the same emotions. There’s a common bond here which I’m sure many people will never know. Oddly enough, I seem to be missing the thrill of victory. Maybe it just needs to sink in. 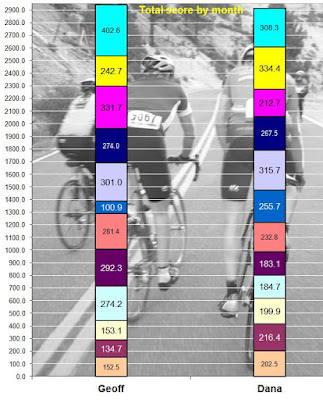 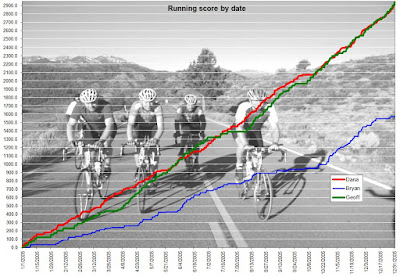 BRYAN: Gentlemen, nicely done. I am impressed and awed at your biking prowess. It’s a privilege to be crushed into oblivion by you.

DANA: I tried. That’s all I can say. Of course that’s not true—I can always say more. For example, nice job Geoff! I’m actually not that bummed about losing this year, because I lost to such a gritty opponent.

GEOFF: Well, I can scarcely believe that I actually won. I honestly thought it was impossible to beat Dana on the bike. I’d like to take this opportunity to thank everyone who made this victory possible, including the artists whose music made it possible to dig a bit deeper, my parents for providing me a genetic gift for determination, my equipment suppliers whose gear stood up to the task, the promoters and producers of this great sporting event, and of course my unwavering fellow competitors, whose dedication and guts are an inspiration to us all. So, what am I doing after the celebration? I’m goin’ to Di’neylan’! 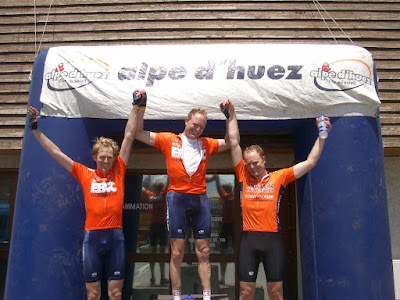