This post is not about the stage of child development in which objects that are not perceivable are still understood to exist. Rather, I’m examining the peculiar phenomenon of physical objects that last far longer than anybody could expect them to. I’ve selected half a dozen surprisingly enduring items to display and discuss. 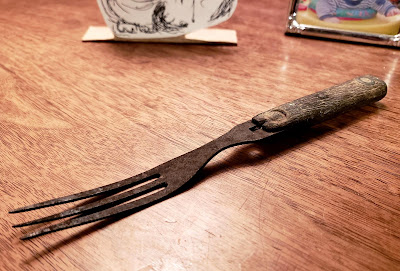 This fork is ancient, obviously. Sure, you could find older stuff in a museum, but this object saw regular use until only 15 years ago. It belonged to my wife’s grandma, and her parents before her. I once watched her use it while making her famous (and delicious) fried chicken, which had only one ingredient—chicken—which she cooked over very low heat in only its own fat. The only other kitchen tool she used for this dish was a skillet. Her kitchen was exceedingly spare, lacking not only a dishwasher but even a dish drying rack. She used this fork pretty much until she died. From there it transitioned from tool to family heirloom. 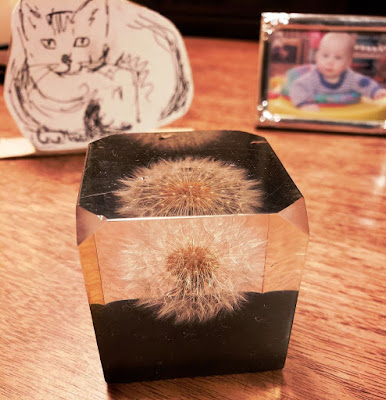 This paperweight has been around since I can remember; as a little kid I would peer into it during brief snatches of time before my brothers would forcefully take it away. All four of us sons were forbidden to touch it. It was one of my dad’s treasures. He never told us where he got it or why. When I moved away it vanished for 30-some years until I inherited it following my dad’s death.

It’s weird inheriting property. Whenever I pick up and inspect this paperweight, I still half-expect that one of my brothers, as a proxy for my dad, will come out of nowhere to seize it and admonish me again. This paperweight still seems like it’s my dad’s property, as if—looking down from some spirit world—he might still have a problem with my touching it. I never got his blessing to take possession; it’s merely one of the spoils of having outlived him.

The little cat drawing in the background is only a year or two old. I included it because my younger daughter (featured in the framed picture, ca. 2004, to the right) has already expressed astonishment that I kept it. She tossed off the picture very hastily and it was on its way to the recycling bin when I intercepted it to use as a desktop tchotchke. I’m going to see how long I can hang onto it. 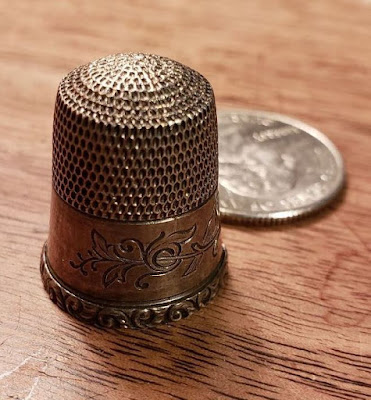 This thimble must have been my mom’s, and since it appears to be sterling silver, she probably acquired it before taking on the expense of children. Though not as old as the fork and the paperweight, it has the added distinction of having been in my possession for quite a while—since about 1990 when my brother Geoff gave it to me. I’d loaned him a sew-up tire patch kit, and he returned the kit with the thimble added. The (partial) history of this thimble is given in a letter I wrote to Geoff on April 14, 1996:

[The need to mend a shoe with needle and thread] called for the Velox sew-up patch kit I use from time to time. Every time I need it I hope, almost desperately, that I still have it around somewhere. It’s one I bought from Square Wheel (the price tag is still on it, $7.95) more than five years ago to give to you so that you could repair a bunch of my tires. Inside the patch kit tin is this really groovy thimble, with engravings of birds and ivy and stuff all over it. Accompanying the thimble is your Post-it note: “Dana, I found this v. cool thimble in the basement-kine [of our childhood home]. Please don’t lose it. Hugs & kisses, GA.” I always get a kick out of that. The patch kit itself is great; the thick, curved needle is industrial-grade, and punched through the thick rubber of my shoe just splendidly, without puncturing my finger thanks to the thimble. But the note is more impressive yet, due to its staying power. I mean, it had to be more than five years ago you wrote it. The Post-it is written in faded fountain pen and is on the verge of falling into four pieces, as it’s been folded and refolded so many times. But it’s still around. Amazing for a product with the intended lifespan of perhaps just a few days or weeks.

I still have the patch kit somewhere in the garage—it pops up occasionally before going missing again—but the last time I used it, the curved needle and Post-it were gone. The thimble now lives in my desk as one of my treasures. And as often happens, a chance photo of the note still survives ... not nearly as cool as the curling-up, faded note itself, but better than nothing. 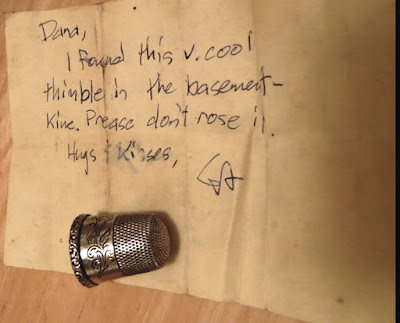 (Does it bother me that this thimble could still technically be my mom’s property? Nope. I think to her it was always just a thimble, and it wasn’t off-limits to us. Mom didn’t really do treasures so much; perhaps we kids were enough.) 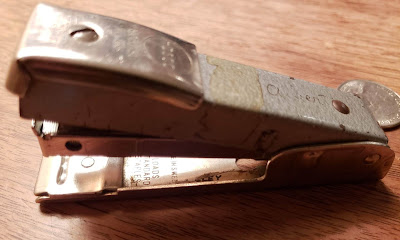 Zoom in and look closely at the engraving on the base of this stapler: “MADE IN SWEDEN.” That’s how you know it’s old. Now look even closer: there’s a bit of tape just to the right of that which is almost all gone but still clearly says “LEY” and most likely says “ELEY.” That’s my dad’s handwriting and I’m 99% sure the tape, when intact, had my dad’s address, ending in “BERKELEY”—i.e., this is a stapler my dad had in college, at least 60 years ago.

Not only is this stapler likely older than the thimble, but it’s been in my possession, in continual use, since 1984. My dad didn’t give it to me—I took it. Every time I look at it I have a queer feeling, just this side of guilt. I know he didn’t intend for me to have it, but I didn’t care at the time. I pilfered this stapler out of spite, probably relating to my parents’ divorce for which I held my dad primarily responsible. I felt he wouldn’t miss the stapler because he never used it. (He was never home.)

It’s an odd concept, “stealing” a household object from a parent. I simply took the stapler with me from my family home to the condo I moved into with my mom after the divorce. Since then this stapler has traveled with me to San Luis Obispo, Santa Barbara, Oakland, Berkeley, San Francisco, and Albany. It did cross my mind, during college, how neat it was that this stapler, having been used by a Berkeley student in the 1950s, found its way back there to be used by another student in the 1990s. That satisfaction was of course tinged with the not-quite-guilt feeling I described earlier. I wish I’d had the rapport with my dad to show it to him and say, “Hey, Pop, if you ever wondered where your kickass Swedish stapler went, it’s right here. I stole it off you back in ‘84. And no, you can’t have it back.” 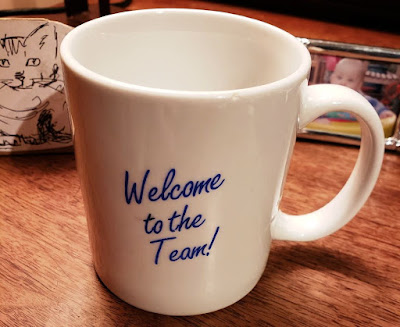 I was given this mug in 1995 when I landed a new job (at a company whose logo you can’t see in this photo as it’s around the other side of the mug). Obviously this is the youngest object featured in this collection, but it’s also one of the most fragile. That chip on the rim is recent. I don’t know what’s more amazing: that this mug is still unbroken, or that I’m still at the same job. I would not have predicted either scenario back in ‘95. When my kids begrudgingly do the dishes, they’re very slapdash and clumsy and I fear for this mug’s life. I’m tempted to say, “Be careful! You’re gonna get me fired!” 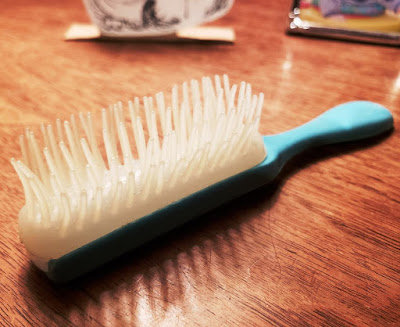 Okay, so this hairbrush isn’t exactly an antique, but it carries the distinction of being the only hairbrush I’ve ever had. (Before my mom bought me this brush, my hair was so fine and limp it didn’t need brushing.) I have used this hairbrush after virtually every shower I’ve taken in the last 40-plus years. It’s been with me through a dozen households, and untold vacations and business trips. The opportunities for its loss have been countless.

Now that I’m a homeowner and don’t see any need to ever move again, it’s tempting to think I’ll have this hairbrush for the rest of my life. But the greatest risk of its loss comes from my kids. It’s almost comical how many hairbrushes they’ve gone through. A day doesn’t go by without them hunting around frantically for a missing hairbrush on their way out the door. It’s also surprising how many brushes they’ve broken; one brush lasted just a few days. And despite my telling these girls repeatedly that this is my hairbrush, they borrow it a lot. I’ll find it in the shower, or their bedroom, or the living room. My younger daughter even brought it to a slumber party once—that was a close call.

Once my kids reach escape velocity, this hairbrush’s status as a lifelong possession will be virtually assured. After all, I won’t be using it that much as my hair steadily retreats toward the back of my head. Eventually there won’t be enough hair left to brush, and sometime after that I’ll die.

This is the recently alarming thing I’ve come to ponder about my possessions: surely some of these will outlast me, such as the boots I bought awhile back that have an unconditional lifetime guarantee. I don’t have a problem with my house carrying on without me—after all, it was built long before I was born, and houses and land aren’t our possessions, not really—but to think of quotidian objects outlasting me … it’s a little scary. When we buy something, we expect it to serve us for a time, and then wear out or become obsolete. Not the other way around.

Only a few years back, during my Everest Challenge days, I’d go through several pairs of road bike tires a year. I’d order a bunch at the beginning of the season and have to re-order halfway through the summer. Since then I’ve been disheartened at how long a single pair of tires will last. It’s becoming progressively easier to imagine that, one day, without realizing it, I’ll mount my last pair, not because I’ll quit cycling but because cycling, and everything else, will quit me.

If all goes well, by the end I’ll have used up most of my possessions. My survivors will get my wristwatch, the dandelion paperweight, the silver thimble, and the blue plastic hairbrush (and hopefully not too many papers with Post-it notes reading, “FILE LATER”). My daughters will of course have those fancy wooden brushes with the fabric-backed bristles that make the brush go “whoosh” across your head, so the hairbrush will have to go to someone’s cat. And that’ll be that.