Stage Play - They Haven’t Met You

While driving down my least favorite Bay Area highway, where it always seems to be rush hour, I noticed this billboard: 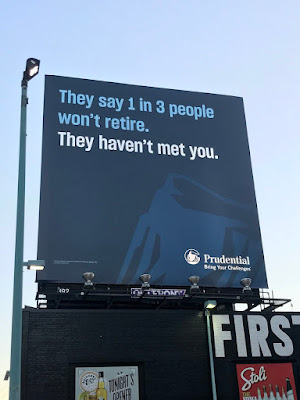 The following stage play is a work of fiction and any resemblance of its characters to any actual human—living, dead, nascent, or undead—is purely coincidental. Only the billboard is real.

THEY HAVEN’T MET YOU
A Play in Two Acts

A cocktail party in a ranch-style house in Sunnyvale, California. The open floor plan has the kitchen bleeding into the dining room and family room, where sliding glass doors open onto a large patio next to a pool.

[Enter YOU. YOU wander over to the kitchen nook and select a bottle of beer, then drift among the guests until you fall into conversation with HIM.]

YOU: Yeah, it’s one of my favorites. Pretty cool of our hosts to style us out with it … this stuff ain’t cheap.

HIM: Well, Brad and Lisa do seem to enjoy the finer things, and I happen to know business is good at Brad’s firm … I was talking to him about it earlier.

[HE extends hand. YOU and HE shake.]

HIM: My name’s Nelson.

HIM: Where do you work, Nick?

YOU: Oh, that. Well, you know … I just kind of do what I’m told and go where I’m supposed to … I’m pretty much running out the clock until retirement, to be honest.

HIM: You know, one in three people won’t retire.

YOU: If one in three won’t retire, I’ll be one of the two who will.

HIM: How can you say that?

YOU: Well … I mean, things are going good, I’m building up some savings…

HIM: That’s crazy talk. Like I said before, one in three people won’t retire.

HIM: I’m not trying to be a dick or anything, but as a society we spend more time clicking “like” than planning for retirement.

YOU: I’m not really into social media, to be honest.

HIM: We spend more time looking at billboards than planning for retirement.

[YOU drain your beer and cast your gaze around the room.]

YOU: I kind of doubt that, actually.

HIM: What, you actually plan for retirement?

YOU: Well, yeah. I’m working with a financial planning outfit. They’re helping me put together a program. I’ve got a pretty healthy 401(k), and there’s my wife’s IRA, and we’re pretty well diversified. I use an online retirement calculator and I think I’m on track to retire pretty comfortably in another 10 or 15 years. It’s not exactly rocket science.

HIM: Look, I happen to know a fair bit about this, and like I said earlier, 1 in 3 people won’t retire.  So, these things you’re saying: I’m just not following you.

YOU: Oh, hey, I just spotted a friend of mine out by the pool. I’m gonna go say hi. I’ll catch you later.

A large conference room. THEY are gathered around a table with legal pads, laptops, and mugs of coffee.

THE HEAD GUY: Okay, next item on the agenda: Nelson, you apparently want to challenge one of the things we say? Is this for real?

HIM: Yeah, hey, it’s this retirement thing. You know how we’ve been saying that one in three people won’t retire? We’re definitely getting the word around. We’re being quoted saying this. We’re even mentioned by some billboards.

THE HEAD GUY: And your point is …?

HIM: Well, I know this sounds crazy, but I met this guy at a party, and  … I’m starting to think maybe we’re all wrong here. Maybe this thing we’re saying, about the one in three not retiring … I think we may be mistaken.

THE OTHER GUY: What, you meet some guy at a party, and now you’re second-guessing us? Like, all of us? That’s such BS, man! Nobody questions us—least of all, one of us! Who was this guy?

HIM: Well, he seemed like a pretty typical guy, middle-aged, likes good beer, wears khakis, hangs out at parties. But I got to talking to him, and apparently this guy has his retirement plan all worked out. He’s talking to some firm, has a 401(k), uses some kind of online calculator … he’s really got all his ducks in a row, which completely flies in the face of what we’ve been saying.

HER: Well, now hold on, Nelson. If we’ve been saying one in three won’t retire, that means—

HIM [cutting HER off]: That’s exactly my point! We’ve only been saying all that because we haven’t met this guy! And now I’ve met him, and he’s turned this one-in-three thing on its head! We gotta reconsider this. We gotta challenge everything we think we know.

[SHE stares at HIM for a few seconds.]

HER: As I was starting to say, Nelson: if one in three won’t retire, that means two in three will, and the statistical likelihood is pretty good that any joe we happen to encounter will be one of the two in three who will retire. So there’s really nothing remarkable at all about your friend’s having his act together.

[HE pounds fist on table.]

HIM: Damn it, Rebecca, you can blather on all you want about statistics, but that’s just because you haven’t met this guy. He’s amazing! He makes us all look like a bunch of chumps!

[HEAD GUY stares HIM down for a spell.]

HEAD GUY: Any questions? [Pauses.] Okay, moving right along, next agenda item: “New Things We Should Be Saying.” Ideas, anyone?