In Defense of Multitasking

It’s pretty widely acknowledged that most of us multitask. At the same time, we’re lately bombarded with warnings about how ineffective and even harmful multitasking is. Neither multitasking nor these warnings look like they’ll subside anytime soon. So what’s going on here? Are people just dense and/or stubborn, or are the naysayers full of crap? Neither, I’ll argue. Both the behavior and the warnings are partially correct.

I think this question is the crux of the matter. Those who warn against multitasking too often do so without defining what they’re even talking about. This article on Monster.com declares that “Multitasking makes you less productive,” “Multitasking makes you less effective,” and “Multitasking can slow down your brain,” but doesn’t ever say what multitasking is. This article in Forbes says, “A study at the University of London found that participants who multitasked during cognitive tasks experienced IQ score declines that were similar to what they’d expect if they had smoked marijuana or stayed up all night.” Pretty specific consequences, but again the precise multitasking behavior isn’t described whatsoever. Imagine an article saying that “drinking caused test subjects to be unable to walk in a straight line or speak clearly” without saying how much was drunk and of what. And yet “drinking” in this context is no more general than the term “multitasking.”

This article on Health.com at least gives a few examples: “We all do it: Texting while walking, sending emails during meetings, chatting on the phone while cooking dinner.” The problem is, these examples don’t add up to a specific type of behavior. Let’s apply this to my earlier example: “We all do it. Sharing a Heineken with our spouse. Having a glass of wine with dinner. Lining up eight shots on the bar and downing them one after another in the span of just a few minutes.”

In other words, I find fault with any article that implies all multitasking behaviors are equivalent. Sending emails during a meeting, I would argue, is more difficult than chatting on the phone while cooking dinner. It’s pointless to lump these activities together as a single behavior that should be avoided. To advise anybody on the effectiveness of multitasking, we need to define it better.

So what is multitasking, really?

At its most basic, multitasking is doing more than one thing at a time. I mean, duh. So, walking while chewing gum is multitasking. Singing in the shower is multitasking. Listening to music while driving is multitasking. So is knitting while watching instructive calculus videos at khanacademy.org. This last example is from real life … I caught my daughter trying to do this the other day. (I hope she did better on the test than on the scarf.)

The problem arises, I think, from the promise of modern technologies that, we believe, can endlessly increase our productivity. We can have multiple tabs open on our browsers, can play background music on our laptops, and can carry on multiple concurrent chats in separate windows. In fact, the term multitasking originated in the computer realm, according to the OED (as described here). When we use this term to describe human behavior, it’s somewhat metaphorical, as though the human brain worked just like a computer’s CPU. To the extent it doesn’t, we fall down on the job.

The temptation to do two things at once is perfectly reasonable: we don’t have time to do everything, so we need to be as efficient as possible. It doesn’t make sense to abandon this impulse entirely, just because it’s said to be ineffective and/or dangerous. Instead, we should simply be more careful about exactly what we try to double up on.

First off, the phone can be a great multitasking device—so long as you use it as a phone. All kinds of things can be done while having a telephone conversation. My favorite such activity is doing the dishes. This is such a brain-dead simple operation, I’m this close to being able to do it in my sleep. That’s why it’s so boring. So whenever I decide to phone up a friend or family member, I like to put on my headset and head into the kitchen. At least 99% of my brain power goes into the conversation, and at the end the dishwasher is loaded and the kitchen is clean. Should I really stop doing this just because every time someone multitasks, God kills a kitten?

I’m not saying any phone conversation can be carried out while housekeeping. When I’m on a work call, I need to concentrate more. That doesn’t mean I don’t multitask, though; I like to take notes on my laptop during the call, which not only helps me remember what was discussed, but actually increases my focus. This only works, of course, because I can touch-type. (Writing down notes actually distracts me, probably because it’s slower so I fall behind.)

Where people get in trouble, I’ve found, is when they try to sneak a peek at other incoming information during a boring conference call. First they’re just scanning their inbox, then they’re reading their email, and soon enough someone on the call asks them a question and they reply, “Could you provide a little more context around exactly what you’re asking?” which is code for “I totally didn’t hear a word you said and would like another try.”

So what about the Health.com example, chatting on the phone while cooking dinner? I’ve totally done that! If I’m just shooting the shit with my brother, while making a barebones pasta dinner for my kids, there’s almost no way I’m going to screw up. Worst case scenario, a pot boils over or I temporarily forget the spinach in the microwave. This is in no way similar to the dire consequences of trying to text while driving, even though both get lumped into this insanely generally category called multitasking.

Sure, sometimes this benign multitasking will backfire. The other day a phone conversation took an unexpectedly intense turn while I was making pour-over coffee, with this unfortunate result: 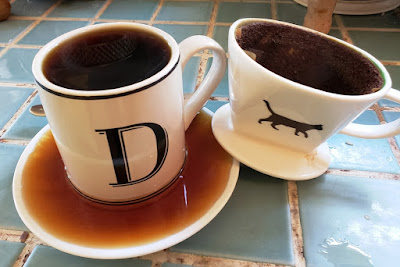 Sure, that was a bit of a mess, but does it mean going forward I should just sit in a chair with my hands in my lap every time I talk on the phone?

How to choose your multitasks

The trick to multitasking, I think, is to make sure you only pair cognitively difficult tasks with brainless ones. Singing in the shower is pretty obviously a safe pairing because neither task demands your full attention. Where things get tricky is when both activities seem simple—boring, even—but they are nonetheless too complicated to actually do simultaneously.

For example, driving isn’t particularly exciting, but it’s very demanding cognitively. Texting is such a humdrum, everyday activity, it’s tempting to think it’s brainless—but it’s not. Needless to say, texting while driving is a dangerously stupid combination. The problem is, you simply can’t watch the screen and the road at the same time. You have to go back and forth between the two, which is much harder than many people seem to think. They try to run a mental process that keeps track of how long they’ve looked away from the road, but texting draws them in and subverts this process. Next thing you know, their urgent message—”whats up lol”—has gotten them in an accident.

So to draw the line between reasonable and unreasonable multitasking, you should ask yourself whether you’re truly doing two things at once—singing and soaping, for example—or just shifting your attention back and forth between two points of focus—say, the video and your knitting, or your screen and the road. If your multitasking involves that constant shifting of focus, then you really aren’t being efficient or effective. You’re merely interleaving two tasks, and adding a third focus-management process on top of them. Your performance actually drops.

After I watched my daughter trying to knit while watching the calculus video, I had her do a little multitasking game with me. (I learned it in a class I took recently on executive function.) All you do is write out, by hand, the sentence “Multitasking is worse than a lie” and then, below this on the page, you write out all the numbers from 1 to 27. You time this activity with a stopwatch. Here’s the result my daughter and I got: Writing the sentence and then the numbers took us 23 seconds. (Actually, I was a second or two slower than my daughter. She’s a born competitor.) The end result is pretty much the same—both the sentence and the number strings are complete—but the operation took us more than twice as long, at 48 seconds. Also, I didn’t do as good a job … somewhere along the line I dropped one of the numbers and only got up to 26. As you can see, neither task is difficult, but both require your complete attention if you’re to do them efficiently.

It’s actually an oversimplification to divide all activities into “requires focus” and “doesn’t require focus.” For example, in general I’d say listening to an audio book while driving is a safe activity, but not always. My family enjoyed listening to Lemony Snicket while driving through rural Oregon, but I once tried and failed to listen to Wallace Shawn’s one-man play The Fever while driving southbound on I-880. Wallace Shawn is the highly intellectual guy who had dinner with Andre (and should have titled his play My Dinner Without Andre), and I-880 is a hellish stretch of freeway between Berkeley and Silicon Valley that features high-speed bumper-to-bumper traffic as early as 6:00 a.m. I didn’t crash my car, but had to save The Fever for later.

Similarly, chatting on the phone while cooking isn’t always a reasonable combination. What if it’s a delicate discussion, and/or you’re trying out some really tricky new recipe? There’s no conversation so casual that I could maintain it while trying to follow an instruction like this: “When nearing 234 degrees, there is a fine overall bubbling with, simultaneously, a coarser pattern, as though the fine bubbled areas were being pulled down for quilting into the coarser ones.” Similarly, just making toast might be too much for me if a loved one is croaking out his dying words over the phone.

I think the trick to multitasking is to pause and question yourself honestly: are you really increasing efficiency by combining these two activities, in this particular instance? Is it truly the case that nothing is lost? If you and your spouse are carrying on a conversation while walking your dog, the answer to this internal query may well be yes. But other situations should reasonably lead you to question your behavior. Does the friend who’s trying to talk to you really not care that you’re only pretending to listen while you futz with your phone? Is the angry motorist honking and flipping you the bird really the one who’s out of line? Is there actually any point in attending a conference call in which you miss 90% of what is discussed?

My conclusion: feel free to multitask … just keep yourself honest.