The term “stealth training” has been thrown around by bike racers for decades but perhaps hasn’t ever been formally defined. At the risk of diluting the intrigue by getting overly analytical, well … here I go.

The essence of stealth training

Stealth training, most would agree, is extra riding to get a leg up. Often, it’s done by a member of a team who thinks an extra workout here and there, done solo, might help him or her improve more quickly than his or her teammates. (A fellow blogger offers this description, which suggests that riding in the dark and/or cold is an essential part of stealth training. I don’t agree that it is.)

Of course everybody trains solo at least some of the time; where stealth training comes in is when you could be riding with your pals but aren’t. I was accused of this when I rode for UC Berkeley in 1991; every week I’d see a group of teammates cruising down Pinehurst while I was on the way up. When questioned, I explained I had to ride earlier due to my class schedule. This met with a skeptical “mm-hmm,” as though skipping class was no big deal; i.e., the real explanation must have been the idea of getting higher quality training on my own. (I didn’t, and had no illusions to that effect.)

Sometimes stealth training is simply a matter of tact. When I was at UC Santa Barbara I’d skip riding with teammates once a week when I had to do intervals, as I couldn’t bear to be around anybody when I did them. At first I tried to be up front about it, but others insisted we could all do intervals together and still get the job done. That lasted exactly one ride and then I went back to stealth training (i.e., “Sorry, I can’t ride Tuesday afternoons anymore … I have to work.”)

Sometimes stealth training targets friends instead of teammates. In high school, I started riding every day with my new friend Pete (whom I’d met at a bike race). We were fairly well matched (though he was faster). The problem was, Pete had formerly ridden every day with another friend, and when he three of us rode together, this friend just couldn’t keep up. Pete could have made some excuse for breaking off their arrangement, like something to do with his schedule, and then Pete and I could have started our own ride that met somewhere else, but Pete didn’t want to lie—at least, he didn’t want to tell that particular lie. Instead, he told his friend, “You can’t ride with us anymore because Dana doesn’t like you.” This wasn’t entirely false, but it wasn’t the whole truth, and sure wasn’t very nice. (In case you feel bad for the third guy, don’t worry: a few years later he came past me in the collegiate national championship road race, whacked me upside the helmet, told me to get a haircut, attacked, and soloed to victory. I kid you not.)

The funniest accusation of stealth training I’ve had was from the leader of the UC Berkeley team. This came the day after a road race in which I’d beaten him. I hadn’t intended to beat him. We had a guy up the road in a two-man breakaway, so we weren’t chasing. Toward the end of the race I figured our star could win the field sprint for third, and I offered him a lead-out. He was still sulking about having missed the break; he was one of these guys who thinks that getting third when your teammate wins is still losing. He turned down my offer, so I got a sweet lead-out from another teammate and won the field sprint myself.

When I encountered this team leader at the next day’s criterium he said, “So, did you go out for a little stealth training ride yesterday evening?” I was taken aback. What kind of idiot did he take me for—I mean, who thinks it’s a good idea to get in extra training between two days of racing? Moreover, he seemed irked by the idea, as if after beating him in one race I decided to totally overturn our team hierarchy via secret solo rides. It was bizarre.

“No, I didn’t do any ‘stealth training’ yesterday,” I assured him. He glowered at me. “Dana, I saw you,” he said acidly. Turns out he’d seen me riding home from my girlfriend’s apartment (still in my team kit, as I’d gone there straight from the race). It was just a misunderstanding, easily cleared up when my girlfriend vouched for me.  (Yes, this guy actually fact-checked me. That’s how convinced he was of my treachery.)

Fortunately, accusations of stealth training are usually given (and taken) more lightly. Here’s an exchange from an old bike team email thread:

Ceely:  Anybody got tomorrow (Memorial Day) off? Wanna ride?

Lucas [early the next morning]: No riding for me today, enjoy.

Lucas: Today that’s Dana and Craig, I heard they were meeting at Wildcat and San Pablo Dam Road at 5:30 this morning.

Can stealth training involve more than one rider? Sure, if a few are going rogue together. Did this 5:30 ride count as stealth training? Yeah, I suppose it did. Craig and I were training for the Everest Challenge, which means riding Mount Diablo twice, so in the interests of not taking the whole day (which would piss off our wives), we needed to make our ride “surgical”—i.e., minimal time spent waiting around for stragglers, latecomers, or people who think it’s perfectly reasonable to stop in Danville for coffee. By scheduling the ride at 5:30 and notifying teammates only by word of mouth, we kept the group small (i.e., limited to a select crew of complete nutters).

My favorite stealth training technique, back when I rode more with the team, was to do tons of hard winter riding on the indoor trainer so that, during the early season, I could miss several team rides in a row, then show up saying how out of shape I was, and hope to surprise everyone in the famous Walking Man sprint. (This almost never worked, by the way.)

The email exchange quoted above was from before everybody was on Strava. I’m not actually a Strava user myself, so I’m no authority on how it fits in with stealth training, but this article suggests that some riders will withhold posting some of their workouts as a stealth training technique. I polled my road team on this topic, and right away a teammate replied, “It for sure goes on!” He even named a local team that’s apparently fairly notorious for this. Another teammate replied, “I don’t post any ride where I maintain more than 500 watts for over 60 minutes. So I throw away a lot of rides.” I think he’s kidding. (Or is he?)

Of course, a lot of the value of Strava is that you can see how fast a rider has been going, and thus how hard he’s been training, even when you’re not able to witness it firsthand. This could help you spy on your rivals, but also makes you vulnerable to being spied on yourself. I coach a high school mountain bike team, and during a recent ride, I brought up the topic of Strava and stealth training to a fellow coach. As we watched Lincoln, our fastest rider, leave us in the dust, the fellow coach said, “To really throw people off, Lincoln and I should just trade Garmins at the beginning of the ride!”

As a coach, I encourage extra training because I hold practice only three times a week, and the more advanced riders ought to be doing more. Not all riders are comfortable hitting the trails solo, so a couple of times I’ve loaned a trainer to a rider who is coming back from illness or injury, to help him or her return to fitness faster. 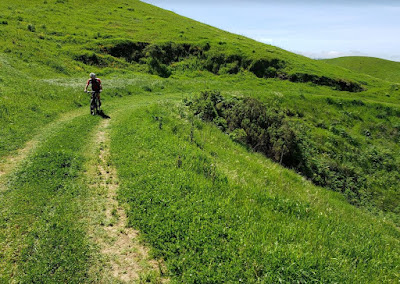 Several times I’ve had an ambitious rider email me asking if he or she can meet up with the team but then break off and do a totally different ride (perhaps even a road ride) with another teammate. I ignore these emails, and explain later, “Look, if you two want to cut practice, and go do some ride I don’t know about, that’s fine. But the moment you show up for the team ride, I’m responsible for you, so no, you can’t go off in other direction where I can’t provide supervision or assistance.” It’s surprising how hard it’s been for me to get this idea across. What part of “stealth” do these riders not understand?

At least half of my team’s riders do extra workouts on a regular basis, which begs the question, why not just add another practice? The convenient answer is that it would be hard to line up enough coaches. Beyond that, it might make it harder to recruit new riders, who might not want that much training, thank you very much.

But there’s a bigger reason not to add another practice: I love the initiative that stealth training requires. Recently, on a non-team-practice day, I headed out for a solo ride of my own. Fifteen minutes in, I encountered one of my riders at the Summit Reservoir in Berkeley, a common cyclist gathering point, waiting to meet some others. I’m not sure how she arranged this, because she wasn’t sure who these other riders even were. “Are you the riders I’m supposed to be meeting up with?” she was asking. Another five minutes into my ride, descending Central Park Drive, I encountered another of my riders, hammering up the climb towards me in a small group from a rival team. Ten minutes later I came upon a fellow coach, riding solo. He is a relative newcomer to cycling, having picked it up when his daughter joined the team, and was no doubt shoring up his fitness to better keep up with the youngsters. How cool is that … four stealth training missions, all in one evening!

My enthusiasm here doesn’t just come from the obvious fitness benefit. My main goal as a coach isn’t to get top race results from any individual rider, or even from the team as a whole. My main goal is to turn these kids into lifelong cyclists. I love seeing my riders out there stealth training, partaking of the sport without being led along by coaches and teammates.

I’m especially stoked when I encounter a former member of the high school team, who has now graduated and gone off to college, putting in some miles while home for winter or spring break, just for the pleasure of it. When I see that, I know the program has done its job. It is my earnest hope that most of our current riders will bring their bikes with them to college and keep at it, even if they don’t have a team to ride with. Today’s stealth ride becomes tomorrow’s … ride.