Why don’t they call it Literature Major? I mean, it’s not like you’re learning to speak the language or something.

That seems like a fair question. Of course, “literature” could be in any language, so at least “English” makes it clear. “English literature” was probably the full name of the major and was it eventually shortened. If it had been shortened to “literature,” people would further shorten it to “lit,” and there would be terrible puns around drunkenness. But the truth is, I just don’t know. The origin of “English” as the name of the major isn’t something they taught us in the major.

I have this uppity English-major friend who insists the name of the Lolita author is pronounced Nuh-BOH-kov, but we all know from the Police song that it’s NAH-bah-kov. Is my friend just putting on airs?

Why are you always correcting people’s grammar? It’s really annoying.

Why do I always get accused of that? I never correct people’s grammar. People seem to lay that on me for no good reason. Maybe they’re afraid that I will correct them, because they know I could. But I don’t, and I don’t think many English majors do. Truth be told, we aren’t taught much, if any, grammar in this major. I happen to have impeccable grammar because I care about it, but that was true before I went to college.

How do you hide your smugness and air of intellectual superiority when thrown in with a bunch of Business majors?

I sense that your question is either sarcastic, or some kind of trap. Let’s talk about this face to face over a beer sometime.

I was a panelist at a workshop recently on building executive function in teenagers. During the meet-and-greet I introduced myself as John Morse, and then the next panelist glared at me and introduced himself as “Joe Blow, he/him/his.” What the hell was that all about?

Joe Blow was surely using a shorthand for the more complete introduction, “My name is Joe Blow and my gender pronouns are he/him/his.” He was conveying his Preferred Gender Pronouns (PGPs) as described here. It is becoming more common, particularly in progressive communities, to provide these in advance so nobody needs to worry about offending you by getting your pronouns wrong due to an automatic assumption about your chosen gender identity.

I have no problem with the embrace of PGPs in language, as it’s a movement that means well, but I do think it rude of Joe Blow to glare at you. Setting somebody up to guess wrong about your chosen gender identity seems like a victimless crime to me, since it’s still statistically unlikely this panelist would need to employ a pronoun at all when referring to you. I mean, how long does the panel discussion last? Couldn’t he just say “I think John’s point is that…” rather than “I think his point is that…”? Also, is it the end of the world if he guesses wrong about your pronoun and you have to gently correct him?

Personally, I’m tempted to say, next time I’m introducing myself, “My name is Dana and my personal pronouns are she/him/their.” But of course I wouldn’t actually do this. I’d hate to offend anybody.

A degree in English? What are you going to do with that?”

Your question would be much more appropriate if I were still in college and my future were a great unknown. But actually, I graduated long ago, but still use the label “English major.” To say “English graduate” just sounds weird, doesn’t it? Funny, isn’t it, how a law student graduates and becomes a lawyer, and a medical student graduates and becomes a doctor, but an English major graduates and doesn’t really get to call himself anything? I guess that’s kind of your point.

Anyway, I fielded this question a lot back in college, and it’s a pity the movie “Napoleon Dynamite” hadn’t come out yet because then I could have answered, “Whatever I feel like. Gosh!” Anyway, you need to learn not to ask English majors this question, because you’ll probably work for one of us someday. Myself, I own a home and drive a pretty cool car. So lay off.

What do you do when somebody corrects your grammar?

I don’t know, because that has never happened. Some advice columnists seem to enjoy falling on their swords as a show of humility, but that strikes me as irresponsible. I don’t get corrected because I don’t make mistakes. That’s why I get to dispense advice.

That being said, I have been put on the defensive by someone claiming I’ve made an error when I actually haven’t. For example, my dad was once emailing a friend of his about my blog, explaining that he (my dad) didn’t tend to read it because my posts are too long. (He reckoned that the post I was running that week would, if printed, comprise 29.3 pages.) In his email he pointed out something he construed as an error on my blog: “It would be fun to tease [Dana] about ‘That’s me’ as opposed to the grammatically correct ‘That’s I’ [in the sentence ‘That’s me with my friend Dan.’]”

Right off the bat, I have to question my dad’s use of the hypothetical subjunctive—“It would be fun”—when in fact he clearly was teasing me by copying me on this email. But my main issue was his simpleminded assumption that punctiliously correct grammar is always appropriate when communicating informally with a specific audience. I replied as follows: “Rest assured that what you took for a grammatical error was a conscious stylistic decision to use the colloquial ‘that’s me.’ I figured that particular post would get a lot of pageviews from dumb jocks, who would not realize that ‘That’s I’ is actually correct, and would be distracted by the correct construction. If you look at some of the comments readers posted, you'll see I likely guessed right.” I went on to correct my dad’s math about the length of the post. It actually ran only 6½ printed pages, not the 29.3 he erroneously calculated. Take that, Dad!

With all this emphasis on STEM, I don’t think there’s any way to convince my kid to pursue a Liberal Arts degree. When people, particularly the STEM types, ask you why you majored in English, what do you tell them?

Honestly, when faced with this question, my stock reply is, “Well, frankly, I knew it would be an easy major for me. You see, I grew up speaking English at home.”

I know this isn’t that funny, and it’s certainly evasive, but I just don’t think the STEM types can be easily convinced. You either grasp the value of the Liberal Arts, or you don’t. I feel bad for those who head for these dependably lucrative fields because they’re afraid of ending up poor and miserable. To me this indicates a pitiable lack of swagger.

If pressed on this topic, I’ll sometimes quote from the commencement address delivered by a former professor of mine, the bestselling writer Maxine Hong Kingston. (Because I went through the ceremony in May, but actually finished up that December, I was able to get a copy of the speech from Maxine herself—with her own handwritten notes in the margin.) When hassled by others for her choice of English as a major, she said something to the effect of, “Look, I didn’t treat college like a vocational school. I got the degree of an aristocrat.” (I don’t have the transcript handy so I can’t quote her directly, but you get the idea.)

I won’t deny that there are people who truly love math, engineering, or writing software. My brother was one of them, and he dove headfirst into programming because he just loved it. This was in junior high when he surely wasn’t thinking whatsoever about his future. But you’d never have had a conversation with him about STEM vs. English; he would have been too busy coding. But for those who don’t truly love math and science, to pursue a “practical” major that will “set them up to thrive in the new information economy” etc. seems like a recipe for frustration and unhappiness.

Can you recommend ten great novels for me?

I’m flattered you would ask me that, when the Internet is replete with recommended reading lists. But this is a tough request because I don’t even know you, so it’s hard to guess at what you’d enjoy. My wife, who is (well, was) also an English major, loves a lot of the same books I do, but would also hate a number of my favorites. For example, I love the relaxed pace and meandering style of T.R. Pearson’s Off for the Sweet Hereafter, but I know it would try my wife’s patience.

So, with that lengthy caveat, I will try to cobble together a list, knowing that as soon as this goes to press I’ll think of ten more books that are more deserving. I see that I already gave you one title, so here are nine others in no particular order.
It seems ridiculous not to include Anna Karenina in that list, but it’s almost 900 pages long. Are you really going to read anything that thick? 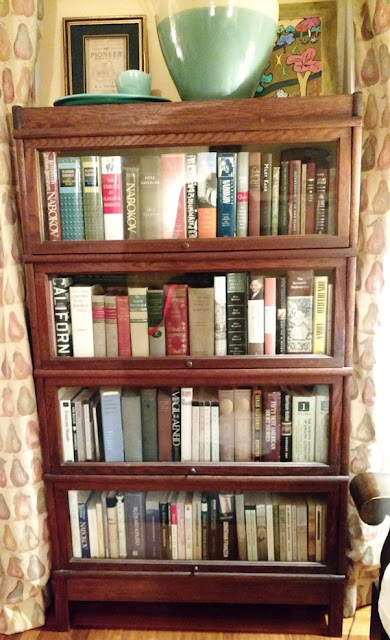