Well, yesterday’s election was sure dull. My city and county didn’t have anything on the ballot so it was a non-event. But that’s how I like it … I detest politics. I’m not one to discuss such matters, nor—usually—to write about them. But I did take an interest, a year ago, in California’s Proposition 7, which was titled “CONFORMS CALIFORNIA DAYLIGHT SAVING TIME TO FEDERAL LAW. ALLOWS LEGISLATURE TO CHANGE DAYLIGHT SAVING TIME PERIOD.”

All the summary stuff in that proposal suggested only that we wouldn’t have to change the clocks twice a year, and the brief summary was really vague about exactly what was being proposed. You have to be one of those really punctilious  readers, who go to the actual text of the proposition, to discover the real purpose, which was “to provide for the year-round application of daylight saving time” (with an important caveat, “if federal law authorizes the state”—a very big “if”). You can read the full text here. 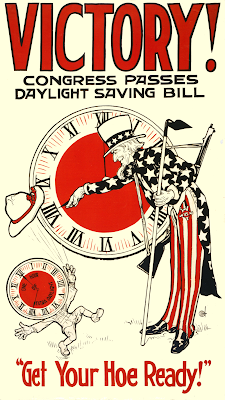 My take on Prop 7

In my previous Prop 7 blog post, I thoroughly dismantled every argument in support of this proposal; considered one legitimate argument for permanent DST that the Prop 7 proponents didn’t mention; explained what’s wrong with permanent DST; pondered how Prop 7 managed to pass (my best guess being that it’s related to Prop 64 from the previous election, which legalized marijuana in California); and explained why this absurd and delusional bit of legislation cannot possibly ever affect anything in the real world.

Well, a year has passed, and all of us Californians just turned back the clocks, as usual. So far, Prop 7 hasn’t done a thing—just like I predicted. The only forward motion, as detailed here, is that a California Representative now promises that in January, 2020 he “will introduce an Assembly Joint Resolution urging Congress to authorize states to practice permanent daylight saving time.” Um … that’s 15 months after Prop 7 passed. What the hell has this guy been doing for the past year? Preparing his case? I’ll concede it will be an uphill battle, especially if it’s just this one guy as opposed to a giant task force.

I decided to survey my bike team friends about this (via our group email list). I wanted to see whether they remember this proposition at all; what they remembered; whether they remember the outcome (i.e., passed or not); and what they would expect to have happened by now. Finally, I’ve asked them if they were aware of what this California Representative was looking to do, and how they felt about that. Not surprisingly, the results were interesting, and the (often cheeky) comments amusing.

Of 19 respondents, five had no recollection of Prop 7. Ten recalled that it dealt with California’s approach to Daylight Saving Time (though the title of my survey must’ve given them a good hint). Four respondents (including myself)  “remember perfectly well exactly what it was all about.”

I guess I’m not surprised to be in the minority of people who have kept tabs on this. My wife and teenaged kids profess to be totally bored by any topic related to Daylight Saving Time. I can’t understand this … after all, how our society observes DST affects our daily lives. It determines whether I’m trying to sneak in a bike ride before the workday starts, or eke one out with my remaining energy at the end of the day. It determines whether or not our morning commute, or our children’s, takes place in the dark. Beyond these quotidian matters, I find DST intrinsically fascinating (as I detailed in a non-Prop-7 DST post many years ago). But then, as my kids are fond of pointing out, I’m obviously a crazy mutant from another planet.

I guess I also shouldn’t be surprised that half my respondents had no recollection of whether or not Prop 7 passed. Maybe some of them didn’t pay attention because that outcome is irrelevant, given California’s inability to tell Congress what to do.

Who accurately recalls what Prop 7 aimed for?

Of my 19 respondents, none took the bait on the first multiple-choice response, “Brings CA back into compliance with federal law around DST” even though this bears striking resemblance to the title of the proposition. Well done, friends! I also didn’t fool anybody with “Rolls back the DST extension created during the second Bush administration,” a false response contrived based on what I heard from a couple of confused voters a year ago. However, no fewer than nine respondents thought that Prop 7 sought to allow California to consider opting out of DST entirely. That’s kind of almost the opposite of its real purpose, which only six respondents correctly recalled. (Only one major nation has tried year-round DST: Russia. After four years they admitted their mistake and went back to normal.)

Bringing up the rear, four respondents chose “None of the above,” and unfortunately I forgot to provide a comment section for them to write in what they thought Prop 7 was trying to do. That’s a shame, though I expect at least one comment would have been something like “Hell if I know!”

Given that Prop 7 did pass, what do folks expect to happen?

Nobody clicked on my first multiple-choice response, “I'm wondering why I just changed the clocks back ... wasn't Prop 7 supposed to make this unnecessary?” I think this outcome nicely showcases the widespread cynicism we all have about whether voting really matters and/or whether our governments can actually bring about change.

Four respondents chose “I'm wondering whether anything has happened in terms of pushing legislation through Congress to deliver the promise of Prop 7.” That’s a fair question and I’m surprised more people didn’t choose this response.

Nobody chose “I'm wondering why there is nothing on the ballot today to take the next step and vote on exactly what California will ask Congress to do.” I’m a bit surprised by this. The original proposition, if you didn’t read it carefully, insinuated that all we were doing with Prop 7 was abolishing the clock-changing nonsense, and we’d worry about the fine details later.

Six respondents (including me) chose “I grasped immediately, a year ago, that Prop 7 could never actually deliver any change, because Congress has no incentive to let California be out of whack with the rest of the country for four months a year.” Yeah, exactly. It’s one thing to be a leader in something like a smoking ban, a soft drink tax, or mandatory composting—these are laws California can enforce within our own borders without anyone else having a say. But pretending we can just overturn the federal law around DST makes barely more sense than passing a law declaring, “Disadvantaged Californians may now steal one car or truck apiece from our neighbors in Nevada, Oregon, or Arizona with impunity.”

Disappointingly, not a single respondent chose “Oh, crap, I assumed Prop 7 was in full effect, and I didn't roll my clocks back last weekend!”

That leaves nine more responses. One survey recipient declined to answer this one. (Probably he or she had fallen asleep, as a consequence of a totally befouled circadian rhythm due to the time change.) Two respondents declined to select any of my responses because they didn’t remember Prop 7 that well … fair enough. One respondent apparently thought this test was open-book and wrote, “I realized after reading a short article on the subject that it will take additional action through the state legislature to put it into effect.” That’s cheating! I was trying to get a read on what people felt would be appropriate. I guess with Google, nobody bothers to ponder anything anymore—they just go straight for the answer.

One respondent wrote, “Hawaii and Arizona don't observe daylight savings time, so I didn't think Congress would care if California opted out of it.” Ah, this is a confused voter (or abstainer). Prop 7 isn’t about staying on standard time—it’s about staying on DST. That’s what’s so annoying to me: the way it was written was very confusing (probably deliberately so) which is why I suspect so many Californians didn’t realize what they were actually voting on.

I would love to know what all the California voters, particularly the majority of voters who supported Prop 7, expected to happen. Possibly like half of them thought we’d go to Standard time year-round. We’ll have to settle for what my survey respondents had to say.

Two of them were both aware that a lawmaker would use Prop 7 to push for year-round DST and were glad that California voters are having their wishes carried out. Three respondents weren’t aware of this outcome but are glad to hear voters are being served. This attitude presupposes that these voters actually knew what they were voting for. I guess these five are less cynical than I.

One respondent was aware that Prop 7’s passage would lead to the year-round DST effort and doubts this is what California voters wanted. Hear, hear.

Five respondents (including me) chose “No, and frankly I couldn't care less because obviously Congress will nix this with a quickness.”

Again, the most interesting responses were “Other” with a comment:
To be continued…

Check back every few years … I’ll continue to monitor the slow, wasting death of this totally pointless and doomed legislation.
But wait, there’s more!
If you just can’t get enough of this topic, click here.