From the Archives - Freak Bicycle Accident

I consider bicycling to be a reasonably safe activity. Obviously it has its risks, and I’ve been injured a few times. Even so, by my rough calculation, I’ve cycled close to 200,000 miles, so I’m fine with my track record so far. There are those who think urban cycling in particular is unconscionably dangerous, but you know what else is dangerous? Urban walking. I don’t recall anybody trying to make the case that pedestrians should just give it up (unless you count Irvine, California where walking is so unheard of, it’s practically against the law.)

A recent article in “Berkeleyside” provides maps of where in Berkeley the reported pedestrian and cyclist accidents occurred last year. According to the Berkeley police, 230 people were injured across 220 accidents, and three killed. Of these, 98 involved bicycles, with 99 injured and one dead. Here is the map of bicycle accidents: 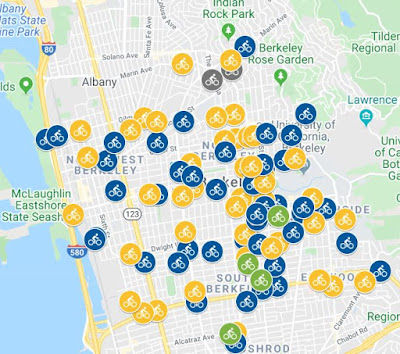 A yellow marker indicates that the driver was at fault; blue means it was the cyclist’s fault. So how does this break down? Police ruled that “fault was evenly split, with drivers and cyclists each responsible 47% of the time.”

What about the other 6% of the time (indicated with a green icon)? In those cases, police didn’t assign blame to either party. And yet, in three of these four accidents, the cause was “unsafe door opening.” So … would it be that hard to ascribe blame? Let me give you cops a hint: do bicycles have doors? 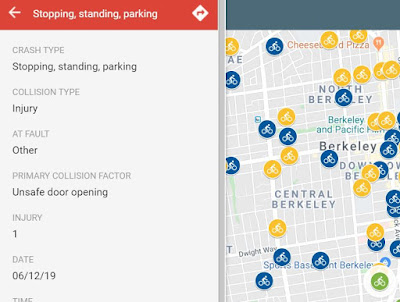 In my experience, and that of most of my cycling pals, police are quick to assign blame to cyclists in the absence of overwhelming evidence that the motorist was at fault. Consider my worst bike accident ever: the driver ahead of me inexplicably swung to the right, and then cut a hard hairpin left turn in front of me to head into her driveway. Needless to say she didn’t look behind her, nor signal her turn. I laid down the bike trying not to T-bone her car. Later, after the ambulance hauled me away, the cop rang her doorbell to get her story. (She’d been hiding in her house throughout the ordeal, ignoring my screams, which her neighbors heard a block away.) She claimed to have used her turn signal and that she had behaved very predictably and safely. The police officer took her word for it, even though (as detailed here) her testimony cannot have made any sense. The fact that my bicycle didn’t actually collide with her car further exonerated her. The cop chalked it up as my fault because I was “going too fast” (even though I was below the speed limit). I guess he had a point: if I’d been going walking speed, I might have been able to stop in time. So I’ll make a deal: I’ll go at walking speed from now on, so long as motorists agree to do the same.

Bicycling (like driving) will always involve some risk, no matter how careful we are. Just today, a friend of mine was hit by a car while bicycling. The driver was texting. While driving. While driving, in fact, through a roundabout. Who does that?

But yeah, I’ll confess that cycling has its dangers even when drivers aren’t directly involved. I recently stumbled across an email to a few friends from about six years ago, recounting my most bizarre bicycle accident ever. What follows is about 80% gripping yarn, 20% cautionary tale.

Let me tell you about my crazy bike accident. Yesterday evening I was riding home from Bart [the train station, less than a mile from home] in the dark, around 6 p.m. I had basic lights front and rear. I was trying to turn left on Gilman Street and thought a particular driver was going to let me in, so I was out in the road. It’s a never-ending stream of cars at that hour, heading towards I-80, and they’re all fricking zombies, stricken by tunnel vision as they slog through their commute. Alas, it soon became apparent that, eye contact notwithstanding, the driver wasn’t going to let me go ahead of him after all. The gap he’d allowed to open ahead of his car was apparently unintentional, for now he closed it right up, shaving precious fractions of a second off his commute time. I guess the look he gave me was meant to convey, “I see you there, and I don’t care.”

[Coincidentally enough, this act of non-courtesy occurred almost exactly at the site on the map below, where—about four months ago—a driver failed to yield while turning left, struck and injured a cyclist, and didn’t stop.] 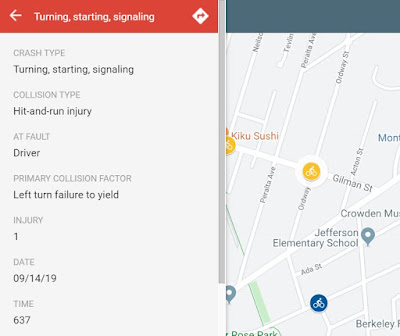 This guy’s attitude was shared by the whole line of drivers, whose safety seemed assured at this speed even though unbeknownst to most of them they were slowly dying, a withering wasting car commuter’s death, the death of actual living that doesn’t become apparent until it’s too late. I rode back across the (empty) left lane and hopped the curb up onto the sidewalk. My plan was to head a short distance down to a crosswalk where I could walk my bike across Gilman, as that’s the only way to get these rush hour motorists to let you through.

So there I was, riding along on the sidewalk, and then suddenly I was down. I mean, it was the weirdest thing, because normally you see a crash coming, and in fact time seems to slow down. (This is because, as detailed here, “your amygdala [acts] as an emergency control center that gets all the other parts of the brain to quit mucking around with their daily tasks and concentrate all the resources on the one, main thing that is happening.”) Normally, there’s an opportunity for evasive action or at least to think, “Oh, shit!” But not this time. I just suddenly realized I was no longer in control, was no longer moving, and was somehow in great pain. Given the suddenness of this situation, and the astonishing force of it—suddenly, everything hurt—I automatically assumed a car must have been involved.

And yet, the weirdest thing was, I wasn’t actually on the ground. The bike was down and I was tangled up with it, but I’d landed on my feet. “Landed?” you may well ask. “What do you mean landed? Like, from where?” I know, it makes no sense. Somehow I went from biking to landing with seemingly nothing in between. I immediately dreaded having to tell my wife about the crash, and the whole situation was so horrifying I found myself yelling, “NO! NO! NO! NO! NO!”

And then I thought, wait, if I’m not actually down on the ground, then I haven’t really crashed. This was a bit of a relief because I was wearing a nice suit and it’d have been ruined. But it wasn’t much of a relief because I was in so dang much pain. My back hurt, my neck, my groin, but especially my head. My head? WTF!? Why would my head hurt when it was nowhere near the ground?

My mind raced, trying to make sense of the situation. With no car involved, and my head far from the ground, I figured somebody must have bashed me with a baseball bat or something. Or maybe I’d been shot? I staggered around, taking in the scene. And then I finally put it together: there’s a tree planted in the median with a big stout bare branch, with very dark bark, sticking out over the sidewalk. I never saw it and I’d simply run headfirst into that bad boy—it was a bit like being clotheslined. I wasn’t going all that fast, but this was nevertheless a terrible way to be (mostly) separated from my bike.

Man, it was horrible. I righted the bike, was amazed to see the chain hadn’t even fallen off, and remounted, but I was in so, so much pain. My head, man, it was just killing me. And my groin, it felt like somebody very strong had tried really hard to rip my leg off. My shoulder hurt , my neck hurt, my back, my legs ... I just moaned and groaned the rest of the way home (only a couple blocks). I got into the garage, flipped on the light, and inspected my helmet. I’m so, so glad I was wearing it. Sure enough, the foam was compressed and cracked ... totally unsurprising given that my head felt like it had taken a hit from a bolt gun. This was a big burly Bell helmet, my commuting helmet, and I though I’m sad to see it go, it obviously served me well.

I hobbled into the house, and my 12-year-old daughter saw me and gasped: “Oh my gosh, Dad!”

I thought, oh no, I must be missing some memory of this thing—maybe I did hit the ground, maybe I’m all bloody or ripped up or something! But I tried to play it cool. “What?” I asked faux-innocently. Alexa said, “Well, it’s just ... I’ve never seen you in a suit before!” Man, what a relief. She didn’t suspect a thing.

I went upstairs and it hurt just taking my suit off. I crawled into bed to rest a bit. It hurt to move so I just lay there on my back. I just wanted to lie there the whole night, but of course there was dinner to prepare and kids to deal with, and actually I knew in the back of my mind that it would probably be a good idea to stay awake for a few more hours and make sure I didn’t get dizzy, or hurl, or look in the mirror and see my eyes dilated or spinning like pinwheels or whatever happens when you have a concussion. [If, back then, I’d had the concussion protocol training I’ve since received as a high school mountain bike coach, I’d have had myself checked out far more thoroughly, believe me.]

So I stuck it out, finished out the evening, cleaned the kitchen, read to my younger daughter, stayed up until 10 or 10:30, took like four Advil and some beer, and got to bed. I woke up this morning feeling really sore and stiff, and I can barely walk. My head hurt most of the day but it’s better now. (I took a two-hour online training on RFID technology and passed the test, so my brain does still seem to work.) Mainly my groin hurts,  but also my neck, like I can barely turn my head. Riding is pretty much out of the question. It’s horrible.

Anyway, the funny thing is, when I was heading out yesterday morning, I actually thought about not wearing my helmet. I had fresh gel in my hair, for one thing; plus, a guy in a suit wearing a helmet on his commuter bike is just so nerdy. But I only paused for a second before doing the right thing and putting on the ol’ brain bucket. So what if I have reactivated hair gel and helmet-head for my big meeting ... vanity is for weenies, right? Right. Man, oh man, I’m so glad I was wearing that thing. If I hadn’t, I might be a corpse now, or an extremist political pundit with his own radio show.