New Year’s Resolutions - Let’s Get It Right This Time

There’s a lot to hate about January. If you’re in the northern hemisphere, it’s probably cold. Meanwhile, the holidays, though they can be a grind, at least represent a slowdown at work—but now they’re over, it’s a new year, and corporate leadership is all gung-ho about plans and quotas and everything. And on top of it all, everybody is talking about New Year’s Resolutions.

Okay, that last statement was untrue—not “everybody” is talking about Resolutions. But if just a few people are, especially in the media, it can sure seem like everybody. Well, if you can’t beat ‘em, join ‘em. In this post I’ll provide some strategies for grappling with this annoying ritual. Don’t worry—I’ll try to be more snide than sanctimonious. 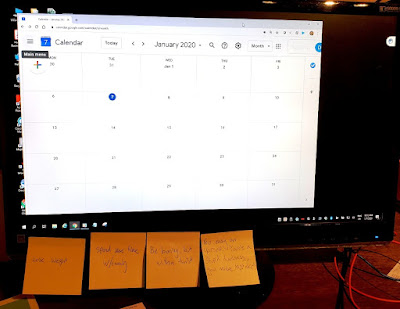 When I bothered to research New Year’s Resolutions for a previous post, I found that most goals were pretty predictable: lose weight, exercise more, drink less alcohol, get out of debt, spend more time with family. Probably not a lot of first-timers, then … more like recidivism, people renewing their resolve to improve in ways they failed at the previous year. No wonder these Resolutions are such a drag! So what is to be done?

Well, one obvious solution is just to give up. I often tell my kids, “Look, if there’s one thing I’ve learned in life, it’s that anything difficult isn’t worth doing.” (This isn’t my own idea; I think I’m quoting, or at least paraphrasing, Homer Simpson.) Face it, if you’ve been in debt for ten years, you’re probably not gonna suddenly make it into the black just because it’s January and you’ve resolved to do so. And if you want to spend more time with family but both your kids are teenagers, good luck with that, too. I’m not trying to be defeatist … but maybe you should scale back or jettison the perennial good intentions if they just frustrate you year after year. Be compassionate with yourself!

Did you see what I did just now, when I said that I didn’t want to be defeatist, even though I was totally being exactly that? That’s a sophisticated literary technique called “bullshit.” If I were a Ph.D. I’d probably call it “being slightly disingenuous.” But I kind of meant it. I really, actually don’t want to be defeatist, not when we’re still only in the first week of January. Let’s try harder.

Just because you’ve failed at a Resolution before doesn’t mean there’s no hope … maybe your approach was wrong. A friend of mine sends me articles he writes for his Counseling website, and the thing is, I don’t mind because they’re actually useful. They’re also really brief. (I could probably learn from that, but I refuse.) He writes here, in his article on Resolutions, that it’s really helpful to “create a social accountability network” by enlisting friends to help cheer you on when you make progress and/or shame you when you fall off. I think this makes tons of sense.

I’d been employing the accountability strategy to some degree already, in my effort to lose weight. I have always used the buddy system when tackling my watered-down version of the South Beach Diet (click here for details). But after reading Ceely’s article I doubled down and looked for ways to “gamify” my program. So now my Sloth Beach buddy and I have a new tab on our shared spreadsheet where we summarize our meals (Good vs. OK vs. Crap) and color-code them red or green. We even have a rudimentary scoring system: 2 points for a Good meal, 1 point for an OK meal (only two meals a day count), plus we subtract a point for Crap, add 2 points for a Large workout, add 1 point for a Medium workout, and tally it up. On a good day you can score six points. On a bad day you may come up negative.

Is this working? Hell yeah! I applied the scoring system retroactively to last year so we could compare our results. So far this year, my average score is up 31% and my buddy’s is up 80%—no  joke! Yes, the year is young, but we’re off to a roaring start.

Obviously the above example only applies to nerdy people who don’t mind infusing yet another aspect of their lives with high-tech tools. So for the rest of you, here’s another case study: I’ve resolved this year to manage stress better, and (given my poor track record in this area historically) I’m trying two new methods: focused breathing and a mantra. (You can’t get much lower-tech than a mantra.)

You might think I’m joking, or that I’m a joke, but the thing is, as I researched stress reduction I kept stumbling on articles expounding the virtues of a mantra, and I’m willing to try anything. I’m pretty early in the process and am still deciding what my personal mantra should be. Apparently it doesn’t really matter what the word or phrase is; many that people select (e.g., “Aum,” “Namah Shivaya”) aren’t in their native tongue, and some are almost like babble. It’s the repetition that does the trick, I’m advised. So last night, when I was tossing and turning in bed, stressed out after a hard day, I started trying out different phrases. Nothing worked until the edges of my consciousness became ragged and my subconscious started to take over. Then a suitable mantra suddenly popped into my head: “Kick your ass, kid!”

This is a phrase dredged up from my past. When I was like ten years old, I got into an altercation at the roller rink with a bigger kid. He was a total stranger to me. His name was like Shane or Shaz or Shalom or something and he was a friend of one of my schoolmates, Brian Bogart, whom I’d previously gotten in a fistfight with during a slumber party. Now, at the roller rink, Brian essentially sicced Shane on me, seeing an opportunity for revenge. I baited Shane a bit, even though I was kind of scared, because I knew my big brother Max wasn’t far away. Sure enough, Max showed up in the nick of time, he and Shane started pushing and shoving and mouthing off. “Kick your ass, kid!” Shane shouted a couple of times. Max threw this phrase back in Shane’s face, mocking him. Just as they were about to start throwing punches, we all got thrown out of the roller rink. That really sucked because Mom had dropped Max and me off there for the whole afternoon, so we were basically standing around in the parking lot for the next hour. Needless to say this incident made “Kick your ass, kid!” part of our family lore.

(Even upon reflection I find that “Kick your ass, kid!” holds up well as a mantra. Had I been better educated at age ten, I might have summed up that roller rink altercation, and the parking lot purgatory it begat, and in fact all the fights teens get into everywhere, and how that turns into posturing and one-upmanship in later life, by quoting Ecclesiastes: “All is vanity.” That was one of the candidates I’d come up with when first casting about for a mantra. But phonetically speaking, “All is vanity” is just not as satisfying as “Kick your ass, kid!”)

Okay, this breathing and mantra regimen—though low-tech—isn’t exactly easy either. You want a super-simple way to be more successful in your Resolution? Employ an “affordance.” My wife came across this term in some book. It has to do with a change you make to your environment to encourage and facilitate a desired behavior. (Here’s what Wikipedia has to say about it.)

An affordance can be extremely basic. For example, if you want to work out more often, and are looking for a way to hold yourself accountable, that doesn’t mean you have to keep a really complicated training diary complete with heart rate and power data. You can just get a fresh wall calendar and record your workouts with a check mark. This is positive feedback, and by hanging the calendar where you’re sure to see it, you make it into an affordance. My family has a shared workout calendar posted in our phone room. This is perhaps the simplest “social accountability network” imaginable. 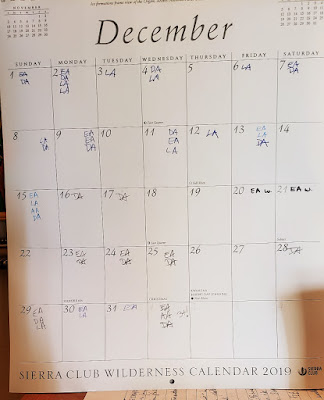 What if you’re too perfect to need a Resolution?

Look, I know there are people out there who so totally have their acts together, it’s impossible for them to formulate a single New Year’s Resolution. Maybe you’re just too perfect and there’s no need to change a thing!

I’ll confess, when I look at my life every January and think of what to fix, I don’t see a lot of low-lying fruit myself. Though I chafe at having a belly where there was none before, my actual body-mass index is spang in the middle of normal. I exercise a lot and I’ve never smoked. Medical studies suggest I should perhaps drink more alcohol than I do. I’m no further in debt than anybody fortunate enough to own real estate. But to assume everything is fine is simply a failure of the imagination. If nothing else, I’m a year older and that automatically suggests some Resolutions:
I’m lucky enough that if I’m ever tempted to leave well enough alone in January, I have my brother Max for inspiration. Most years he comes up with new fewer than a hundred Resolutions, many of which could easily apply to me. Here are some highlights from his fresh 2020 batch:

9. Be alone with someone else who likes to be left alone and leave each other alone.
11. Mom
19. Stop lying to the universe.
21. Stop dripping oil. Period.
49. If I see something, say something, and vice versa.
62. Increase popularity among non-college-educated white males.
65. Don’t eat hot dogs because dogs are sentient beings.
68. Become more sly, selfish, and manipulative but in a good way.
71. Be boring, but with a twist.
72. Learn to ignore impulses by fashioning a quick list of possible outcomes until the moment’s gone.
78. Go easy on myself. I’m a stupid dumb-ass, I make mistakes.
79. Take it easy on all stupid dumb-asses who make mistakes.
93. Scratch ear lobe in a way that doesn’t make it look as though I have bugs or mites. Make it sort of suggestive.
94. Find my secret talent and use it to exploit myself.

My brother sure makes it look easy, doesn’t he? If you’re lamenting (as I am) not being nearly that clever, well … maybe 2020 is the year you finally do something about it!