If you are a cat person, you might be predisposed to like the following poem … unless, of course, you decide it fails to do cats justice, though judging me harshly might also be enjoyable. If you’re a dog person, perhaps this poem will help you to see the light and change your ways before it’s too late. 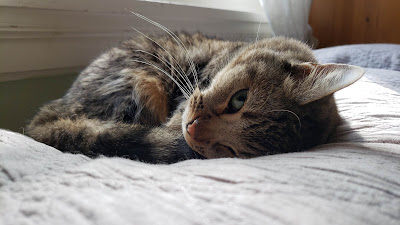 The cruel, accursed beast—she never stays!
A rescue cat, she’s skittish as they come.               10
To run for cover’s just how she allays
Her fear (though nothing’s what she’s running from).

Some weekend mornings, I will rise at dawn
In quest of precious, peaceful writing time.           14
I creep downstairs and put the kettle on.
The stars line up: the moment feels sublime.

Warm mug in hand, I settle down and start
To gather up my thoughts—but what is this?        16
My kitty’s joined me … bless her little heart!
She kneads my lap … O what a treat this is!

But now I can’t get any writing done.
I can’t disrupt my cat, she needs this lap.              20
My little plan will have to be postponed.
I must hold still throughout this creature’s nap.

By chance I find a novel close at hand
And just like that, my morning plan’s recast.        24
Before I’d had such grand, ambitious plans
But now I want to make this moment last.

I could have written this for my cat in particular (i.e., Ode to Freya), but I want to give a shout-out to housecats in general. (Note to Berkeleyites: I know that by city resolution, the term “pet” is out in favor of “companion animal” and “owner” has been replaced by “human guardian,” so the phrase “my cat” may startle you. Yeah, yeah, I know you can’t “own” an animal. I’m tempted to apologize, but then Freya just feels like “my cat” and I refuse to be disingenuous about this. I also gather that in some quarters “Berkleyan” is strongly favored over “Berkeleyite” so I’m tempted to apologize for that, too—but haven’t you folks derailed this commentary long enough?)

Is it verging on blasphemy to call BS on Shakespeare? Hey—not so fast. I’m actually calling BS on Hamlet, not his creator. Why does Hamlet consider suicide, when he’s such a bright guy he can spew perfect iambic pentameter off the cuff? Okay, fine, his dad died and his mom is marrying an asshole … boo hoo hoo. Get a backbone, Hamlet, would you please? I can answer his hand-wringing “to be or not to be” quandary in one word: be. It’s too bad Ophelia couldn’t take a page from Paloma Faith’s playbook (well, songbook) and tell Hamlet, “Don’t say nothing/ Just sit next to me/ Don’t say nothing/ Sshhh/ Just be, just be, just be.”

The phrase “de-stress” irks me a bit, summoning as it does the cliché-ridden lingo of corporate America. But that’s exactly what I need to connote here, because working in this realm is what tires and stresses me out so much.

I feel like during the week, I can barely keep my head above water on the home front. This means anything extra—fixing my bike, organizing the garage, mailing a package—can feel like a really big deal. If I dig deep and take on this kind of crap, I head into the next work week more tired than ever and gradually start to augur in. On the other hand, if all I do all weekend is rest and recover, I feel like I don’t have a life outside of work. It’s an ongoing dilemma.

No, I don’t think cats are actually sophisticated enough to taunt anybody. Conversely, I’m sure they aren’t attuned to sarcasm, which is why I feel completely free to say to my stretched-out, luxuriating cat, “Freya, you really need to slow down—you can’t keep burning the candle at both ends like this.” 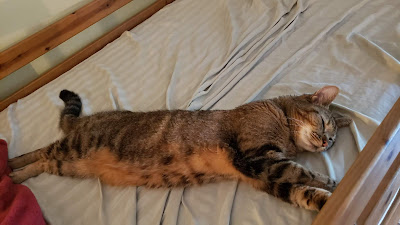 Would we love our pets so much if we didn’t project positive traits onto them? Just like dogs appear to smile, or to have thoughtful, penetrating eyes, cats surely look wiser than they are. It’s an illusion I enjoy, so I let myself believe it most of the time. 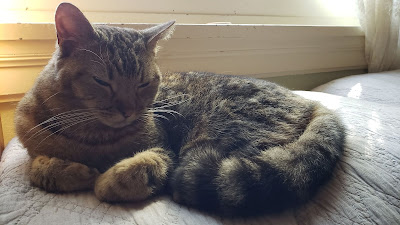 In my experience, there are two kinds of cats: the kind that love to jump onto your lap and do so freely, and the kind who generally avoid your lap. I have yet to encounter a cat who is blasé or ambivalent about this, so it’s pretty pointless to put a cat on your lap and expect him or her to stay.

Given what I just said, isn’t it totally unfair to deride my cat this way? Of course it is, but frankly, as foolish as my behavior is, everyone in my household feels affronted, every time, when Freya bounds away. I never said humans were wise either.

What, you haven’t heard the term “rescue cat”? Well, I haven’t either. But we all hear the phrase “rescue dog,” usually spoken with just a whiff of self-congratulation. Not that I would take anything away from someone kind enough to rescue an unfortunate homeless dog. But I got this kitten from the pound … isn’t that a rescue, too? Not according to the Pet Adoption page on Wikipedia on which the phrase “rescue dog” appears six times  but “rescue cat” not once.

Here’s the Frey when she was very young: 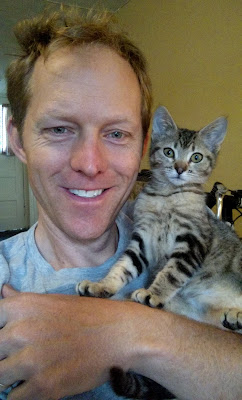 Line 10: skittish as they come

As a tiny kitten, Freya was a stray, and this has left its mark. A car door slams a block away and she races across the room and hides. A shoe drops upstairs and she stiffens, eyes wide, threat level orange.

As a tiny kitten she liked to climb into this tiny basket. It’s amazing she even fit. I suppose she felt secure there, perhaps almost like being swaddled. 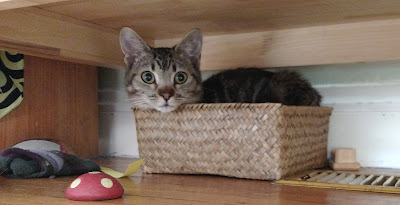 Line 12: nothing’s what she’s running from

Sometimes Freya is just bored and pretends there’s danger, just to have an excuse to race across the house. After five minutes of this she’s ready to sleep it off, of course.

Here she is in a playful moment. 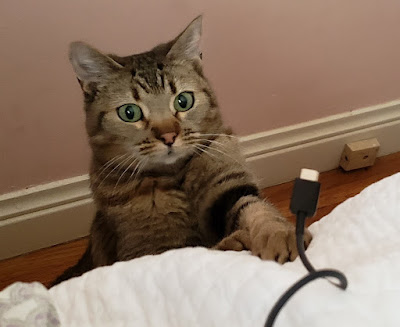 Line 12 would be near the end of a standard sonnet (just before the rhyming couplet at the end). I’m not a good enough poet to condense all my content into so few lines, so I just kept going.

Though I’m not real clear on the details, I’m vaguely aware that “bless your heart,” at least in the South, isn’t exactly a compliment. That’s about right, because the first moments, when Freya has decided to try out my lap, mean nothing. This is her nervous period when I’m expecting her to suddenly change her mind and leap off my lap, so this seemingly loving expression could well be followed immediately by “you little shit.” 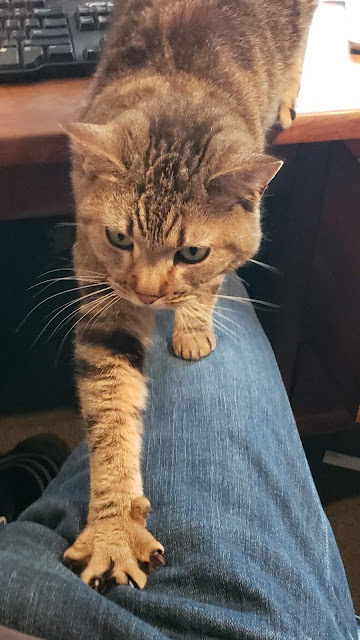 I have a little claw trimmer that I use to keep my cat’s claws from getting too sharp … thus, it is neither painful nor ruinous to my clothing when she does this classic pet trick.

Note how her tail is hooked around her front leg there.

You might accuse me of using this phrase just for a nice poetic shimmer so soon after “kneads my lap.” After all, I’ve made the case that Freya is on the antisocial side, and it’s commonly theorized that cats only sit on us for the heat. But in this case, I had the heater going! Nine times out of ten she’ll take a heater vent over a lap, but that tenth time? Remember, this cat had a traumatic kittenhood. It just might be that some modicum of feline-human connection is actually important to her. Maybe she also treasures this particularly quiet time when she can finally relax enough to succumb to a  lap. 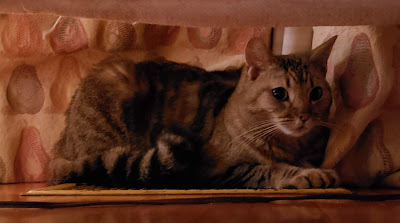 Line 21: have to be postponed

So often, postponing writing for even twenty minutes during this enchanted morning time means losing that twenty minutes forever. When the family is up and around, I kind of want to be distracted. When my daughter says, “Dad, let’s get a bagel!” I wouldn’t even consider saying, “I’m busy [needlessly] writing [endless prose that nobody will ever read], sorry [but not sorry enough to get over my self-importance].” Full disclosure: we’ve gone for bagels only like twice, but it’s a matter of principle. (It sure isn’t a matter of gastronomy; I’ve come to accept that you can’t actually get a proper bagel outside of NYC.)

Do I really have to hold so still that I can’t even type on my laptop? Most of the time, yes … especially when I’m juggling a coffee cup as well. Plus, early in the morning before the caffeine kicks in, I’m still pretty vulnerable to sloth and the cat plays a big role in that … she’s a terrible influence. If she were the kind of cat who always wanted to be on my lap, it wouldn’t be special and I’d probably make her leave so I could work.

Since I’m a sucker for “the exception that proves the rule,” here’s a photo of Freya sitting on me without preventing me from writing. In fact, here’s a bit of irony: if you zoom in, you’ll see she’s sitting on me even as I compose the very poem you just read. 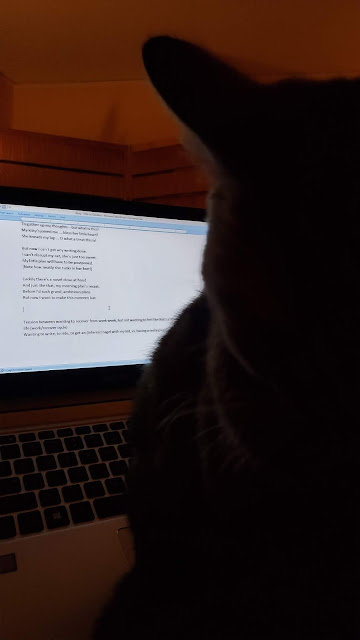 That said, it’s a terrible photo, which attests to the rarity of this scenario. If this happened a lot, I’d have a lot better photo of it.

Well, it’s not actually random chance that there was a novel within arm’s reach. My wife and I were both English majors and our house is filled with books. I read a lot—not nearly as much as I should, actually, and I could easily imagine spending whole weekend reading. The problem is, this would feel extravagant, almost profligate, since reading—for all its value and ability to improve my mind and soul—is still a form of consumption, and everything I consume dies with me. The impulse to write constantly competes: shouldn’t I be creating something, even if it’s only an amateur record of an ordinary life, that will probably be casually deleted shortly after my death when my kids neglect to pay the Internet server bill?

You’re not allowed to laugh at me over my assertion that blogging represents a grand, ambitious plan. I was making fun of myself, so you’re required to laugh with me or not at all.

I refuse to strike or modify this line because it happens to exactly capture what I’m doing here: I expect this time with the cat to last only a little while, and I do want to extend that as much as possible. That said, I concede that this phrase sounds pretty cheesy, like a Kodak ad. So now you can laugh at me.

This return to my opening salvo would be punchier if my poem didn’t drag out to twice the length of a regulation sonnet. What can I say? I’m no Shakespeare.

This last word, rest, seems like the perfect way to end a poem about a cat, doesn’t it? 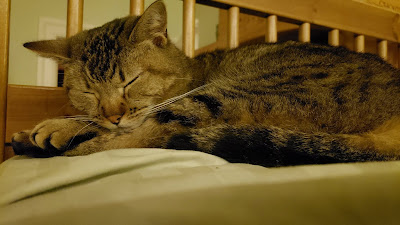