From the Archives - Video Gaming in the ‘80s

It’s pretty clear video games are insanely popular … perhaps too much so. Time magazine has called them “the greatest threat facing America.” (Note: I totally made that up.) A grown man was mugged in my neighborhood a decade or so ago, an obvious target because he was walking down the sidewalk absorbed in his Game Boy. The very next day I saw him again, this time at the nearby train station, still absorbed in his Game Boy. I couldn’t decide whether to push him on to the tracks or mug him myself so I slipped between the horns of the dilemma by silently pitying him.

Considering the wealth of smartphone gaming apps, and gamers’ souped-up computers, and X-Boxes and Playstations etc., it seems like we must be in the heyday of video games. What’s seldom remembered is that there was a lull in this national pastime, when kids got too lazy to trek out to the arcades but before the time when the home consoles got really sophisticated. This post, from my archives, documents a bit of that time, and wistfully recalls what I once took to have been the glory days of video games. I wrote this in college, when I was a student at UC Santa Barbara. 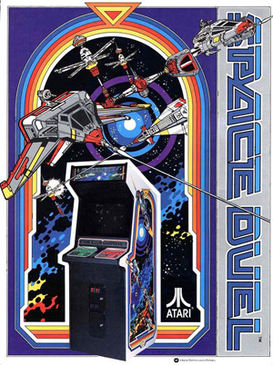 We can all remember the big video game days, back when there were fifteen arcades in town, all offering at least ten tokens on the dollar. Machines were scrubbed shiny; knobs were packed with grease or oil for extra smoothness. These were the salad days of the gaming world. Finding any kid was as easy as remembering which arcade he preferred. We were good, too. Any seasoned vidiot could play for at least forty‑five minutes on one token. But alas, kids eventually came around and the arcades died out suddenly, just like the dinosaurs.

It’s a good thing, too, because the games being designed today are not so innocent and harmless as what we played back then. My favorite was Tempest, a game in which your “guy” (a random thingy shaped kind of like a C-clamp] skittered around on the edge of a geometrically shaped hole shooting abstract figures, which had names like flippers, tankers, spikers, and fuzzballs. Shooting a tanker caused it to vomit up two flippers, complicating your job. When you’d destroyed everything coming up from the hole, you flew through it (avoiding dangerous spikes that could skewer you), then briefly through space (on autopilot, apparently), and landed on another hole to shoot more figures. 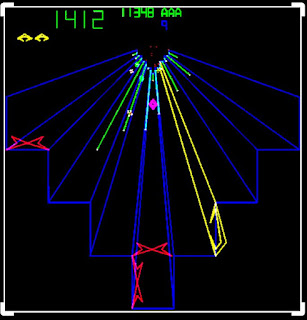 If you didn’t like shooting stuff, you could drive a racecar; that was a popular format. It started with Monaco GP which had really lame graphics; when Turbo came out I like that a lot better. 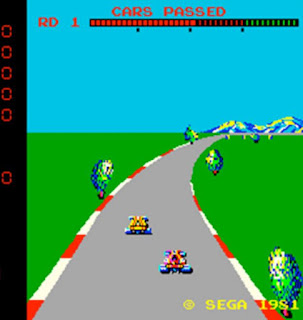 Then we got Pole Position. Its graphics were so amazing, it was tempting to throw over Turbo entirely, except that a game of Pole Position just didn’t last very long (typically 90 seconds). Sure, you could get Extended Play if you drove well enough, but if you got really good at it, eventually you’d make it to the Finish line and then—well, you’d be finished! I was pretty ticked the first time that happened, but then what did I expect? It’s the Finish line! 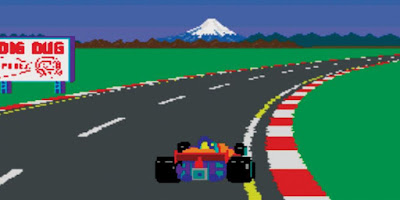 Or you blasted spaceships. That was the meat and potatoes of the vidiot. Those games were abstract, and promoted manual dexterity. Today, a typical video game involves beating up street thugs and prostitutes with clubs, or gunning down soldiers with a machine gun. I know this because last summer I went bowling with the boys from Broad Street Bikes and we observed the mêlée. I have to wonder what the lasting psychological effect of such blatantly violent games is on our youth. But all preaching aside, I must confess that recently, I have visited the arcade here [in Isla Vista] on more than one occasion.

It’s nothing like the old days. But one night, a few months ago, I was out with the boys and we wandered into Video Madness [a video rental place]. They had a bunch of the new-fangled games. I could hear the grunting of the street thugs as they pulverized each other, and the shrieks of the karate champs as they beat each other into submission. But over at the end of the dark room was a Tempest machine. I had to investigate.

Alas, the original knob was gone … the machine was out of order. But right next to it was Space Duel. For me, this game is nostalgic, since [my brother] Bryan and I used to play it back during the glory days of video games. I even talked Mom into playing it with me once, although I doubt she’d remember. 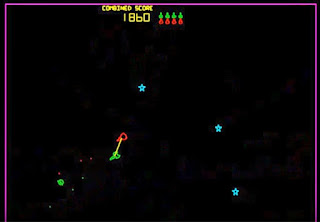 [This video is amazing, by the way. It’s an Atari ad showcasing the game in order to sell it to arcades. It even shows, here, how to set dip switches on the printed circuit board to select different languages.]

Space Duel is a totally unique game among the rest. The graphics are nothing special, the controls are nothing unique, but the method of play is unlike any other. There are various options of gameplay, but my favorite is the cooperative play mode. Two spaceships, joined about their rotational axes by a short rod, are controlled by two different players, who work together to blast various octahedra and other geometric shapes. The cooperation is key. While the players rack up individual scores (the object of any video game), they also rely on each other for survival. Kind of reminds you of the real world, don’t it? And when one player gets hit, his ship is seriously disabled, and his partner begins to outscore him. The wounded player almost longs, at this point, to get hit again so that he and his pal both get new ships and his point deficit is minimized.

The tragedy of the commons is ever‑present here. The injured player has seemingly little to gain from preserving his friend’s life, since this limits his own ability to get points. But if he decides to end it all, he hurts the common fighting unit. And remember, he’s here at the arcade playing with a friend … who would do that to a friend? Well, almost anyone actually. I mean, it’s not like there’s no recourse … your friend can always punch your arm or something. Still, the point of the game isn’t just to score points—it’s to make the game last as long as possible. So you usually limp on.

[Oddly enough, I didn’t know at the time that Space Duel was kind of hip, in a way. The Who had featured it on the cover of their 1982 album “It’s Hard.”] 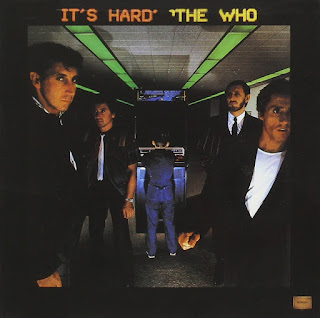 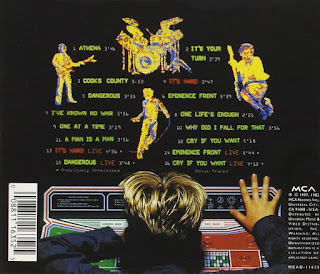 Naturally, Space Duel can also be played by one person alone, and I haven’t lost the touch. I mostly drop in to Video Madness after intense study sessions, to remind myself how trivial school is when you’re fighting for your very existence against a variety of colorful geometric foes. I’ve discovered that I can actually use my score to monitor my stress levels. The lower my overall stress in my life, I have realized, the better I do at the game.

Occasionally, the game itself begins to cause me stress. I mean, losing at anything can be emotionally taxing, and in the moment it can be hard to remember this is just a game. When this happens, and it dawns on me that I’m paying good money to stress myself out, I fire my thrusters on full, sending my ship reeling out of control to its eventual death and the end of the game. In this way I remind the video machine that times have changed, and—unlike the game-possessed vidiots of the past—now I am the master.

For further reading, specifically on the video game of the future, check out this fictional albertnet post: Robotron 2084’.