“When we were sixteen, my friend Shelly and I would mix rum with grape soda. We called it Welch’s Belches.”

I wish I could continue in that vein, but that’s not my story to tell. My subject, alas, is just another bike race. I’m on two teams: a road team and (as a coach) a high school mountain bike team. Both teams have a loose tradition of writing race reports. In the case of the mountain bikers, coaches have to really lean on student athletes to get some snippets, which are compiled anonymously, as you can see here. The grown-up roadies are more apt to write, but less apt to race … especially me. My only routine outing is the Central Coast Cyclocross (CCCX) Cross-Country (XC) mountain bike race at Fort Ord near Monterey. (Just in case that’s not enough juicy keywords to attract readers: iPhone Samsung Galaxy Tesla Silicon Valley Oscars celebrity gossip Scarlett Johansson Jessica Biel Mila Kunis.) At this event, both the kids and their coaches get to race.

Fortunately, my tradition is to go heavy on the food descriptions and mercifully light on the race details. With no further ado here is my report (Gucci Ballenciaga Valentino Prada Versace). If you’re in a rush, fear not: there are several versions, from briefest to goriest.

A biker and wannabe bruiser,
Did a bike race and came out a loser.
He thought he was fast
But this myth couldn’t last
So he’s trying out being a boozer.

Pre-race Dinner: At Gino’s in Salinas:
I also inherited some fettuccine Alfredo (alas, not as good as what I make) from one of my student athletes who, incongruously, couldn’t finish it. Everybody was groaning about how full they were and several of them, particularly the adults, left food on their plates. I wanted to go around scavenging because I was in one of those moods where I could not be sated.

Breakfast: Two thick slices banana bread; one cup super-strong coffee, black; the tip of a croissant I broke off because I couldn’t commit to a whole one (as they’re often gross, though this was rather edible).

During race: Two sleeves of Clif shot blox: one GoLytely flavor, one Jagermeister flavor (okay, kidding, they were both salted watermelon, 2x sodium); a large bottle of energy drink; 2 ½ bottles of water.

Glycogen window treat: At least four oatmeal cookies. A fellow coach shared my towering gratitude that whatever unsung parent baked these amazing cookies last year is still around this year (or has been replaced by an equally talented baker).

Lunch (post-race): Tri-tip tacos with grilled onions, jack cheese, fresh tomatoes, and guacamole … are you fricking kidding me?! Also two or three cheeseburgers, hella kettle chips, and a bunch of Acme bread. Probably some more cookies too, knowing me. 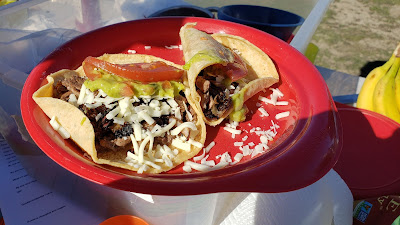 Dinner (post-race): Eggplant ptarmigan (clearly autocorrect isn’t familiar with the word “parmigiana”) that was really good because my wife knows to salt the dickens out of the raw slices first to disgorge that bitter brown liquid that has ruined so many ptarmigans. I washed this down with a beer … a real treat since I was foolish enough to swear off beer for six weeks to try to lose weight for this race. (If that seems like a ridiculous sacrifice to make for a meaningless amateur bike race, consider that it’s arguably less of a sacrifice than training harder, particularly if you’re as fundamentally exhausted by life as I am.)

Here is the post-race Beck’st I sent around: 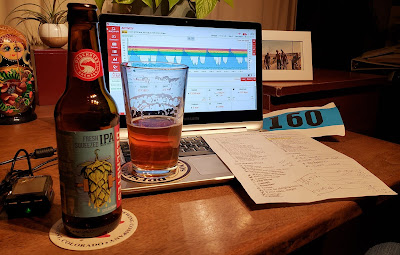 (If you don’t know what a Beck’st is, get thee to a brewery! Or better yet, click here.)

A correspondent replied, “Apparently you were too tired to give us any details.  Also too tired to consider a safer spot for your pint glass than sitting ON your laptop, just waiting for an errant elbow to knock it down…”

So, yeah, details. There’s a lot to unpack with this photo. You can see my old-school bike computer in its PC cradle at the left, and its output—the course profile and race stats—on the laptop screen. If you zoom in you can see how hilly the course was. Also check out my race checklist (the need for which I learned the hard way). You can see all these checkboxes with “DA” next to them … up until this year, there were boxes for “DA” and “AA,” because my older daughter and I went to these races together. Now she’s gone off to college and it’s just “DA” (sniff). You can also see were I’ve scrawled some stats and calculations … figuring out how much I’ve slowed down, and if our team’s new head coach rode faster than I did. (He did, of course, even though his Category 1 race was a lap longer). You can also see how badly I wanted that beer … by the time I’d set up the photo, it was half gone. (My friend needn’t have worried about it spilling on my laptop … it didn’t last long enough for a stray elbow to come around and knock it over.) Finally, in the background you can see a photo of my brothers and me, more than two thirds of my lifetime ago. Could I possibly feel any older? Sure! Ask me tomorrow!

It was mighty cold during the first wave of races. We have a lot of new riders, racing in the beginner category, concurrently with the beginning adults which included a couple of our coaches. One coach stopped when he came through to tell me one of our freshmen had crashed, somewhere out on the course, and might need medical attention. I scrambled around, phoned the kid’s dad, phoned another dad who was near the medical tent, talked to the medics, couldn’t learn anything, and was just getting ready to head out on the course to go find the fallen rider when I heard another report that he was back on his bike. This fire drill fouled up my warm-up pretty badly, such that our second wave of student athletes, who’ve heard my endless exhortations about getting a good warm-up, got to see me scrambling around in the last ten minutes, barely getting any trainer riding in.

Nonetheless, I had a great start. Maybe it’s all that sprinting out of corners in criteriums in my past life as a road racer … on the uphill asphalt section at the top I got almost all the way to the front and was sitting snugly in third when we hit the single track. NOOICE! Unfortunately, people started passing me right and left (literally) after that.

Wow, this is already totally boring! I’m sorry about that. Of course you don’t care what happened next, and I don’t really either. I almost didn’t care at the time … it was too much like life. I was riding as hard as … well, not as hard as I could, but to the limit of my motivation, really feeling the futility of it all, like I was just going in circles (which of course I was). Here’s a photo so you can see all the bastards swarming behind me. Also, marvel at how old I look. I don’t think the clear sunglasses help. I might as well get bifocals. 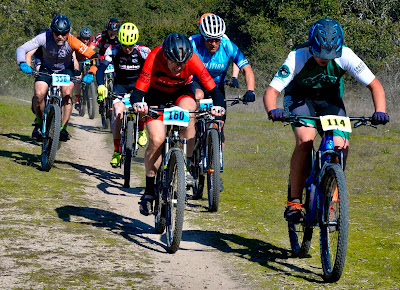 This was a real bike-handler’s course, and I’m not a real bike-handler, at least on the dirt. I kept getting passed on the downhills and then I’d catch the same guys on the short flat sections, draft them through the headwind, and drop them again on the climbs. That was pretty fun, I have to say. I know better than to have any concrete goals for my races anymore … perhaps the best I can hope for is brilliant moments, however fleeting.

One guy took so much time out of me on the downhill sections on the last lap, I ran out of climbs via which to reel him back in. I’d given him up for lost until the final flat sections when I realized he was completely dying. I dug way deep and chased him all the way to the finish, just nipping him at the line, throwing my bike like a real sprinter.

I was pretty stoked about that until I checked his number. He wasn’t even in my category! I have just discovered (looking at the online results) that he’d started two minutes after I did, in the 55+ group, and made the podium. At least he didn’t laugh in my face or anything after the race. I hope I’m as gracious when I’m that age. I sure as hell won’t be that fast.