More Q&A With a Grammar Lover

A friend put it to me that “fuck” is the most elastic word in the English language, since it can be a noun, adjective, verb, etc. I’m guessing it’s not truly unique in this, but I can’t really prove it. What’s your take?

By my count, of the eight parts of speech, “fuck” can be used as five:

These last two are of course gerunds, which to me isn’t as wholly satisfying as if “fuck” itself could be used as an adjective or adverb. Thus, I’m tempted to say “well” is more elastic, because (as detailed here), it can also be used as five parts of speech … and it doesn’t need an –ing suffix. However, as one commenter pointed out, “well” isn’t actually one word. It’s a pair of homonyms. “Well” as in “good or satisfactory” is an entirely different word, with a different etymology, from “well” as in “shaft sunk into the ground.” So to my mind, “fuck” wins, at least between these two.

One more thing: bonus points go to “fuck” for being useful not just as an interjection, but as the most powerful interjection of all time.

In a previous column you asserted that it’s not always appropriate to correct somebody’s grammar. What’s the most tasteless, tactless context for a grammar correction you’ve ever encountered?

When my father was dying of cancer, I suggested he write up his own obituary, just so I wouldn’t miss a life detail he felt was important. He inadvertently wrote his draft from the perspective of someone who was still alive, which is understandable … he may not have fully accepted yet that he would actually die. Accordingly, among my revisions were a number of necessary verb tense changes. I also included an email address so people could send tidings without wasting paper on cards (feeling that this was what my dad would have wanted). One of his friends sent a very terse email pointing out that I’d made a verb tense error in the obituary. The obituary had noted, “He has also done work for NBS/NIST on computer peripherals, power supplies, and the atomic clock” which, as this guy pointed out, should have read “He also did work for NBS/NIST….” The guy was right, of course; my sentence did not properly convey that my father was dead, dead, dead and would never do any more work for NBS/NIST, or anyone else, ever again. (The email itself didn’t say “dead, dead, dead,” but it might as well have.)

Since the email didn’t say anything else beyond pointing out the error, my (admittedly ungrammatical) response was quite brief: “Asperger’s much?” (Just kidding. I did not respond.)

In a previous column you said the silliest example of bad grammar you have come across in music is “exactly whom I’m supposed to be” in the song “Should I Stay or Should I Go” by the Clash. How is this any worse than Eminem repeatedly using the non-word “insaneness” in the song “Brainless”?

For one thing, using a non-word isn’t the same class of error as using “whom” incorrectly; “insaneness” is more like a playful stylistic stretch in the Ogden Nash vein. And this non-word opened the door for Eminem to rhyme with “brainless” and “pain in the anus,” whereas the Clash’s goof didn’t accomplish anything. Besides, Eminem freely acknowledges the poetic liberty; in a muted aside at the end of the song, some nameless adversary says, “‘Insaneness’ ain’t even a word you stupid fuck,” to which the singer replies, “Neither is ‘ain’t.’” Meanwhile, at least two dictionaries (such as this one, for example) do include “insaneness” as a legit word. And above all, the whole point of the song is that the singer is brainless, so why wouldn’t he use a non-word?

What do you make of “their” as a singular possessive pronoun? I know this has long been used when the speaker doesn’t wish to specify one sex or another, but it’s technically wrong and can cause confusion, such as with singular vs. plural. Doesn’t clarity trump convenience here? Can’t we all agree that “their” as a singular pronoun is just plain wrong?

I try to avoid using “their” to refer to an unnamed or hypothetical person, preferring “his or her” or some other way around the construction. But I haven’t traditionally worried too much about other people doing this, as it doesn’t tend to cause that much confusion, really. For example, “Everyone must bring their workbook” could imply that a bunch of students share a single workbook … but common sense should easily put that vagueness to rest.

Things get a bit more complicated around the more recent trend of using a plural pronoun for an individual who doesn’t wish to identify as one sex or another. For example, a non-binary person may request that people use “they” or “their” to refer to “them.” This plural pronoun begets a plural verb, to achieve subject-verb agreement, which can also add confusion.

I will cautiously assert that spoken grammar evolves more quickly than formal, written grammar, so if we’re looking for what’s officially “correct,” it’s useful to take after the dictionary publishers and see what’s in print in a mainstream magazine written for an educated audience. (I wouldn’t look to “Us” magazine, which is all about celebrities, because they don’t even get their own name right; the magazine should be called “Them.”) So, as I’d done when trying to determine the definitive spelling of “kindergartner,” I looked for non-gendered pronouns in “The New Yorker.” Consider this passage from a recent article:

Caro Murphy … said that a Disney rep had told them not to talk about their work at the park, so we spoke about LARPs in general terms. “There is this tension between the commercial part of LARP and the community part,” they said.

The word “them” confused me a bit initially because I thought perhaps it referred to Murphy plus one or more colleagues previously mentioned or implied. But the confusion was dispelled when the quote was followed by “they said.” Obviously this was not two or more persons speaking in unison.

Still, this new usage can get a bit confusing when obvious clues like that quotation aren’t provided. This was the case in the previous paragraph of the same article, which coincidentally involved another non-binary interviewee. And more confusion arose later, with Kes, a LARPer whom the writer and her colleague Tim met onboard a Disney theme park spaceship:

[Tim] told me he thought that Kes might be a cast member. He’d seen her being chummy with Croy in the engineering room.

I [Googled] the name of the LARPer Disney had just hired. I edged around the crowd. “Caro?” I whispered to Kes.

Some of the confusion here comes from a single person being referred to by three different names in the span of seven words, which has nothing to do with pronouns. But the earlier bit about “her being chummy with Croy” did complicate things. Kes, when in character, may have identified as female, unless the writer just made an assumption. But when out of character, Murphy prefers they/them. The writer, when composing the article, knew that Kes was Murphy and thus could have said “them” instead of “her,” but this would have spoiled the surprise of the secret identity.

I got some good advice once in a writing class, which is that a writer should never make the reader do extra work unless there’s a good reason. So is honoring the preference of a source a good reason? Of course! Interviewees are at the crux of journalism (and in this case in particular, Murphy was taking some risk, having been told by Disney not to talk about their work). Meanwhile, professional courtesy aside, I think acknowledgement of any human’s self-identity is more important than ease of reading comprehension. Yes, this can mean extra work for the reader, especially for those of us with a lifelong habit of thinking about gender as a very cut-and-dried, binary matter, but isn’t this kind of work good for us, as we grapple with the more complicated reality?

How good are the grammar checkers in Microsoft Word and Google Docs?

Artificial Intelligence is really bad at grammar. If you asked A.I. to diagram a sentence it simply couldn’t. It is powerless to understand context, so its suggestions can seem practically random. Thus, software grammar checkers are pretty much worthless.

To validate this assertion, I ran a Microsoft Word grammar check against a recent blog post, and then ran the same post through the grammar checker in Google Docs. In theory, both programs should flag the same “errors,” right? After all, if you handed an essay to two different human newspaper or magazine editors, the feedback on grammar and spelling would be similar, one to the next. What I found with the software was that a) there was zero overlap in feedback between the two grammar checkers, and b) most of their suggestions were flat-out wrong.

Here are some of the “errors” flagged by Word (click to enlarge): 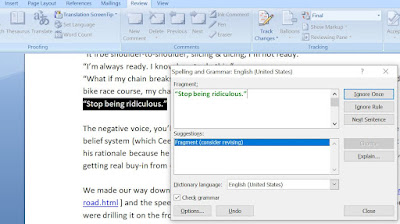 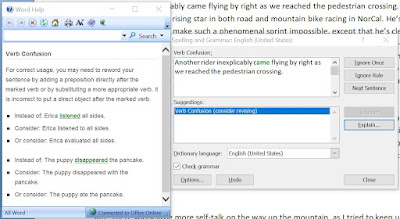 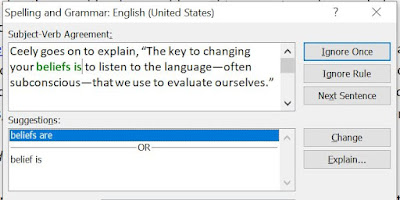 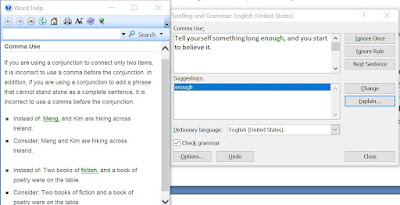 As you can see, Word was wrong in every single case. I sincerely hope nobody is trying to learn grammar by reviewing this software’s suggestions and rationale.

Google did a bit better, finding one bona fide error (I had “other the internal” instead of “other internal”), and only making four incorrect suggestions. One suggestion was particularly inane: in the sentence “I considered his feat from the perspective of coach,” Google suggested I change “feat” to “feet.” Why does this software think I’d be looking at a rider’s feet? Does it assume coaches, and/or writers, are likely to have a foot fetish? The less facetious question is this: as an educated human, why would I ever outsource my editing to software that makes so many mistakes?

In a previous column you said the silliest instance of bad grammar you’ve found in rock music is “exactly whom I’m supposed to be” in the song “Should I Stay or Should I Go” by the Clash. How is this any worse than “If looks could kill they probably will” in “Games Without Frontiers” by Peter Gabriel?

Indeed, this is a clear example of inconsistent verb tense, but why would you suppose it is unintentional? Not only does “will” create a nice internal rhyme with “kill,” but the sudden shift from the hypothetical subjunctive to the future indicative active creates the most jarring—and best—lyric in the whole song. It’s a similar effect to what the masterful novelist Muriel Spark achieves in her story “The Portobello Road” with the immortal line, “He looked as if he would murder me and he did.” In both cases, death goes from hypothetical to real in a split second. So Peter Gabriel’s verb shift isn’t just intentional; it’s brilliant. I wouldn’t say rules were made to be broken, but in the right hands they can be, and to good effect.

Got a question for the Grammar Lover? Click here.

A Grammar Lover is a syndicated journalist whose advice column, “Ask a Grammar Lover,” appears in over 0 blogs worldwide.