This post concerns the spelling of a single word: is it “kindergartner” or “kindergartener”? If this strikes you as an intrinsically interesting question, read on. If you couldn’t care less, perhaps you’re at the wrong blog and should go here instead.

Among my friends, I’m known as the grammar and spelling guy, mostly because I was an English major in college. There’s a common misconception that English majors are automatically good at grammar and spelling. Actually, many aren’t. Just because you love words and writing doesn’t mean you pay that much attention to the rules. Consider this glaring (to me) grammatical error in a novel, The Sparrow, by bestselling author Mary Doria Russell:

Some actual real live person still had to receive the request … and route the data back to whomever’d asked for it.

Now, I’m not some stickler who would call out a writer for saying “who” where “whom” is called for, because “whom” can come off as overly formal or punctilious. That is, I don’t wish George Thorogood had sung “whom do you love.” But when somebody uses “whom” where “who” is called for, he or she is trying to be punctilious, and failing. That’s a bad combo, and I wish I could have advised The Clash not to sing “exactly whom I’m supposed to be.” Similarly, I wish Russell’s editor had caught her error.

But to be clear, my obsession with precise grammar isn’t an English major thing—it’s a Dana thing. I envy Russell’s ability to write good fiction, and I would never suggest she isn’t worthy of an English degree. She doesn’t happen to have one, by the way … she studied Anthropology, but that’s neither here nor there. I promise you I didn’t learn a lick of grammar in any of my college English classes.

Anyway, this post was born when a friend of mine, who is the principal at an elementary school, wrote to me asking about the correct spelling of “kindergartner.” There was a small debate about this among members of his staff, and he confessed (to me) that he was embarrassed at even having to think about it. For the record, I don’t think he should be embarrassed, since the matter is far from simple. (If he’d spelled his title “principle,” well, that would be another story.)

So here’s my take.

Kindergartner vs. kindergartener – which is correct?

I have always spelled it “kindergartner.” I’m not sure why; this just seems intuitively obvious, even though I know it comes from the German word “kindergarten” (i.e., a word ending in “en” that presumably should keep that “e”). This hardwired preference aside, I would never question anybody spelling it “kindergartener.”

As I type these words, Microsoft doesn’t flag either spelling as wrong, for what that’s worth. But then, Microsoft flags “micturate”—a perfectly good word—as a misspelling, so its spell-checker can’t be trusted.

I looked up “kindergartner” in the American Heritage Dictionary, which is a dictionary I like pretty well, and it says “kindergartner also kindergartener.” That suggests a slight preference for the former. For the etymology, it says “[German Kindergärtner, from Kindergarten, kindergarten; see KINDERGARTEN.]” Aha! So that might suggest that kindergartner is more authentic, straying less far from the original German.

I would never base my assessment on just one dictionary, of course (especially since Trevor, a well-educated, word-loving friend of mine, despises the American Heritage Dictionary). So here’s what Merriam-Webster (online) had to say: 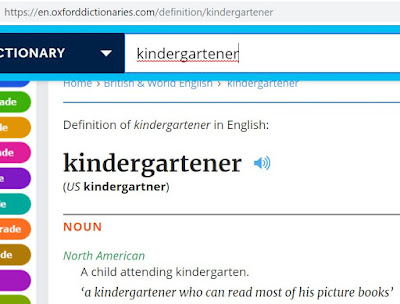 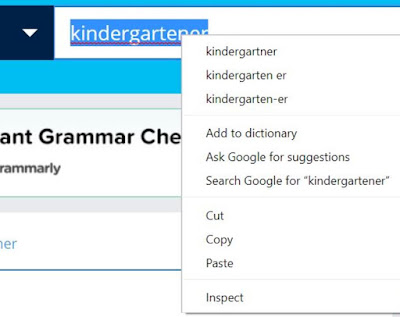 There’s another problem with Oxford’s suggestion that Brits spell it “kindergartener” and Americans “kindergartner,” which is the word origin Oxford provides for this word: “North American.” Well, if it’s a North American word, why wouldn’t Oxford (and everybody else) defer to us, and recognize our way of spelling it?

And while I’m on the warpath with this dictionary, is it really appropriate to suggest this word is North American at all, when it’s otherwise described as German? I’m not arguing that no English words originate in North America; for example, “hella” was coined right here in the Bay Area. I guess Oxford could argue that only “kindergarten” is German and the North Americans coined “kindergartner,” but then why would the Brits have their own spelling? It’s not like the Brits spell “hella” differently.

Next I checked the Associated Press Stylebook. This is what my wife and her colleagues used for reference back when she was a bona-fide journalist. (Out of respect for this noble profession I used to keep one at my desk, too.) Of course the Stylebook is too slim to include all the spellings you could need an authoritative opinion on, but I figured it was worth a Google search to see if they have a more comprehensive version online. I came up with this, from the online AP Stylebook which is hosted, apparently, by Twitter.

I’m going to disregard this completely because they’re using Twitter, and because they’re using those silly “@[whatever]” references, and worse, a hashtag. Hasn’t Twitter caused enough problems in the “fake news” sphere and toward the gradual digitization of the American brain? I refuse to acknowledge that the modern Stylebook has any remaining cred whatsoever. They’re dead to me now.

With all this in mind, and really needing a definitive answer, I visited the New Yorker website. I consider this magazine to be the closest thing I have to a bible, and in over 35 years of reading it I’ve only found three or four grammar or spelling errors. (I also found this glaring error of opinion, but that’s another matter.) I started by searching the New Yorker archives for “kindergartner.” I clicked on the first hit, which was this article from 2016, by Rebecca Mead. Here is the spelling she used, in context: “In March, Stanley Druckenmiller, the billionaire founder of Duquesne Capital, told CNBC that Trump has a ‘kindergartner . . . view of economics.’” So that’s pretty clear: New Yorker prefers “kindergartner,” and that’s good enough for me. So we’re done, right? 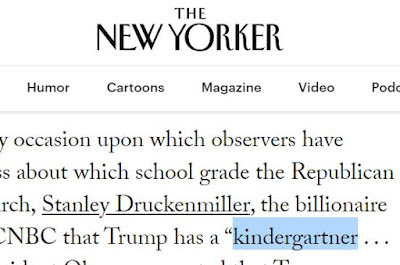 Well, not so fast. Here’s a quotation from the first New Yorker article I found when I searched on “kindergartener,” with the spelling again given in context: “Writing about the kindergartener on hallucinogens raises a wider consciousness that we are living in a world in which kindergarteners are partaking of hallucinogens.” It’s from this article here, from 2017. And guess who wrote it? Rebecca Mead! So she’s not even consistent, and the New Yorker’s legendary editors evidently didn’t balk at the discrepancy. 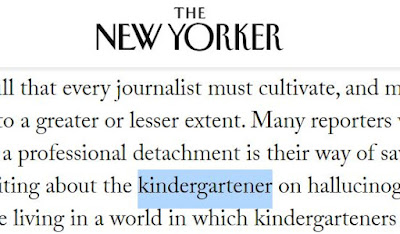 Does this support the British-vs.-American theory of the two spellings? Actually, it does. Rebecca Mead is torn between the two cultures. She was born and raised in England, but moved to the U.S. thirty years ago for grad school and ended up staying … that is, until very recently, when she decided to move back to England because of Trump, as detailed here. (I haven’t actually finished the article yet, but I can tell you it doesn’t include the word “kindergart[e]ner.”) Since Mead has been recently turning away from the U.S., it kind of makes sense that her more recent article would employ the British spelling. Unless, of course, she uses the two spellings interchangeably and arbitrarily … which is certainly possible.

So, what remains to be solved is, what should one do with all this information? I suppose that if you ever find yourself ensnared in a debate on this topic, and want an easy way out, you can forward this post to your interlocutor and let him or her make of it what he or she will. Or, you could cherry-pick the evidence I’ve given, keeping only what supports your pet spelling and leaving out the rest. This will enable you to get your way, seem authoritative, and have that cool sneaky feeling of having pulled a fast one.

Myself, I’m going to keep spelling it “kindergartner,” because I’m of German descent (though also, admittedly, of English descent), but moreover because I’m an American … born American. And these colors don’t run! ;-)