From the Archives - Sting’s Lyrical Blunders

About fifteen years ago, my brother emailed me a blog post by Charles Petzold about a fairly major goof in Sting’s lyrics to “Don’t Stand So Close to Me.”  The essay had to do with Sting’s allusion to the book Lolita, and the age of Vladimir Nakobov’s evil pedophile character, Humbert Humbert. Sting refers to Humbert as “the old man,” but he simply isn’t old. Petzold’s post also recounts a more widespread criticism of the song, which is Sting’s inane rhyming of “Nabokov” with “cough.” 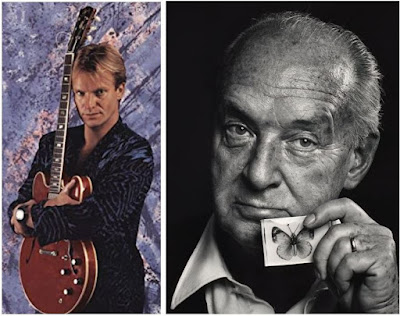 What follows is my original response to my brother (which I’ve fleshed out a bit for this presumably larger audience). But first, some background.

The music magazine Blender recently cited Sting as the worst lyricist ever (story here), in part for the atrocious lyric [It’s no use, he sees her/ He starts to shake and cough/ Just like the old man in/ That book by Nabokov]. At the time the song first came out, much was made of Sting’s ridiculous pronunciation of Vladimir Nabokov’s last name, which should properly be accented on the second syllable.

Then Petzold takes Sting to task for suggesting that Nabokov’s antihero is old:

The “old man” — the narrator of [Lolita] who adopts the pseudonym Humbert Humbert — is hardly old! In May 1947, when Humbert Humbert first meets Dolores Haze, he is 36 or 37 and she is 12. He dies at the age of 42, and she dies at the age of 17. This is not a matter of “inside knowledge” or reading between the lines. Nabokov is extremely precise in the chronology of the novel, and only the most superficial reading (or, more likely in this case, none at all) could [miss] all the signposts.

My commentary, informed by my long study of Nabokov’s work and the two years of Russian I took in high school, elaborates on both gaffs.

Petzold makes good points. I have long been bothered by that mispronunciation (made all the worse for its being the very last word of the song). For years, when I’d sing this (e.g., in the shower), I would change the lyrics to “just like the old man in that book by Vladimir.” This fixes the meter, in that the great writer’s name isn’t accentuated on the wrong syllable, but of course my substitution fouls up the rhyme. Not that Sting’s rhyme was exactly right to begin with; “Nabokov” is correctly pronounced “Na-BOH-kov,” with the final letter being basically a “v” sound, perhaps slightly closer to an “f” than the classic English “v” but in any event a poor match with the simple “f” sound in “cough.”

So, to fix both the meter and the rhyme, and the age while I’m at it, here’s how I will sing the last two lines from now on:

It’s no use, he sees her
He’s feeling really queer
Just like the gross man in
That book by Vladimir

I suppose I’m not on completely safe ground with “Vladimir,” since a very strict Russian pronunciation would accentuate the second syllable, which would have a bit more of an “e” sound, so the word would more properly rhyme with “redeemer.” But I think enough Americans say “VLAD-i-mere” that this is a significant improvement.

Now, in case you’re wondering if it’s fair to say Humbert Humbert felt “queer,” I think it certainly is. At one point late in the novel, when Lolita is starting to distance herself from Humbert, he describes how “I sat down on the grass with a quite monstrous pain in my chest and vomited up a torrent of browns and greens that I had never remembered eating.” That would be a pretty queer feeling indeed (and in any case I don’t remember Humbert shaking and coughing at any point in the book).

What’s arguably even lamer than the rhyme itself is Sting’s effort to defend himself. His website, sting.com, provides this quote (taken from an interview):

Okay, I can defend that. Sometimes rhymes can be so bad they can shock you into listening to them. Most good, full rhymes are just Hallmark card stuff. Moon, June, erm, balloon. But I’ve used that terrible, terrible rhyme technique a few times. Technically, it’s called a feminine rhyme—where it’s so appalling it’s almost humorous.

Okay, let me get this straight: Sting deliberately mispronounced “Nabokov,” to make it rhyme with “cough,” just to shock the listener into listening? What was the listener doing before? Zoning out? Listening to something else? Yeah, right. “Don’t Stand So Close to Me” is actually a rather good song, and this is the very end of it; if there was any need to shock the reader into listening, that would more appropriately be done closer to the beginning.

Meanwhile, the bit about “feminine rhyme” further showcases Sting’s appalling willingness to shamelessly spout bullshit without regard to the possibility that he’ll be fact-checked. “Feminine rhyme” is not characterized by being appalling or shocking. As M.H. Abrams explains in his excellent Glossary of Literary Terms, a feminine rhyme “consists of a stressed syllable followed by an unstressed syllable” and, “since it involves the repetition of two syllables, is also known as a double rhyme.” Examples would be feather/heather and ending/bending. Does this type of rhyme get employed in pop music? Sure! Check out these lines from Eminem:

Yo! His palms are sweaty, knees weak, arms are heavy
There’s vomit on his sweater already: Mom’s spaghetti

Feminine rhyme is what Sting should have employed, since “Nabokov” is a word whose final syllable is unstressed. What Sting actually made was a masculine rhyme, which “consists of a single stressed syllable” such as in bore/poor and louche/douche. If he wished to employ a feminine rhyme in order to achieve metrical accuracy, Sting should have rhymed Nabokov with “fuck off.”

A final note on the botched rhyme and Sting’s lame defense of it: twice on one page of sting.com, Nabokov is spelled “Nabakov.” This further suggests that Sting simply didn’t know how to pronounce the name; obviously, flubbing the penultimate syllable wasn’t necessary in order to achieve the single (masculine) rhyme with “cough.”

Getting to Petzold’s main point, the inaccuracy of “old man” in the final verse of that song: this hadn’t previously dawned on me, and it’s a very good observation. I suppose I’ve allowed the casting in the two Lolita movies to distort my perception of Humbert’s age (and shame on me, because I’ve read that book at least three or four times). Of course, Sting was pretty young when he wrote that song, but was he young enough to think of 36 as old? Well, we can do some rudimentary math here based on the line “this girl is half his age.” If we assume this is high school, the girl is between 14 and 18. (On his website, Sting recalls how “I’d done teaching practice at secondary schools and been through the business of having 15-year-old girls fancying me—and me really fancying them!” Eww.) So the narrator of the song is presumably around 30. Perhaps a little kid would think 36 is old, but not a 30-year-old.

I suppose Sting could try to argue that he meant “old man” as in “father,” as Humbert was in fact Lolita’s legal stepfather for most of the book. But would he really expect all his listeners to have read the book to know that? Besides, it’d be “her old man,” not “that old man.” No dice.

As a final Hail Mary, Sting could always deny that he was talking about the book Lolita at all—after all, there are plenty of shaking and coughing old men in Nabokov’s books. This would be a weak defense, of course, given the subject matter of the song, but there’s still hope: Sting could claim that he was alluding to The Enchanter, a Nabokov novella that’s also about a pedophile (and was an early precursor to Lolita). I can’t recall the age of its awful protagonist, but at least he is described as “balding.” But from the perspective of that hypothetical defense, Sting nullified it when he recorded a new version of the song in 1986 and changed “that book by Nabokov” to “that famous book by Nabokov.” I doubt anybody would call The Enchanter a famous book. And in interviews Sting has mentioned his admiration of Lolita.

I think it’s appropriate that Sting topped the list of awful lyricists. I saw a documentary about him from 1985, and he just came off as a pompous ass. In one scene, Sting asks his drummer or somebody whether “chasm” is pronounced with a “k” sound or a “ch” sound. This makes me wonder if he really writes his own lyrics to begin with. I mean, who would use a word he doesn’t even know how to pronounce? Oh, wait ... Sting, obviously.